After receiving multiple comments (and even a text from a friend!) about the “lady on my shoulder” in Monday’s post, I wanted to make sure that all of you got the chance to meet my new little friend.  (Zero in on my left shoulder if you’re still confused). 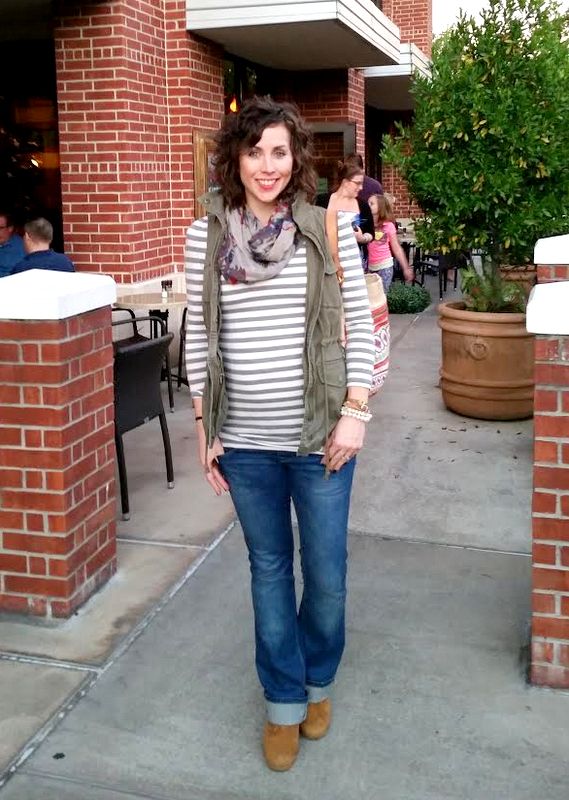 Quite the optical illusion, eh? I laughed so hard when I first saw it.

Aaaaaand now back to the business at hand…which would, apparently, be asking for recommendations on the best place to send my 4th child for Poser’s Anonymous meetings. 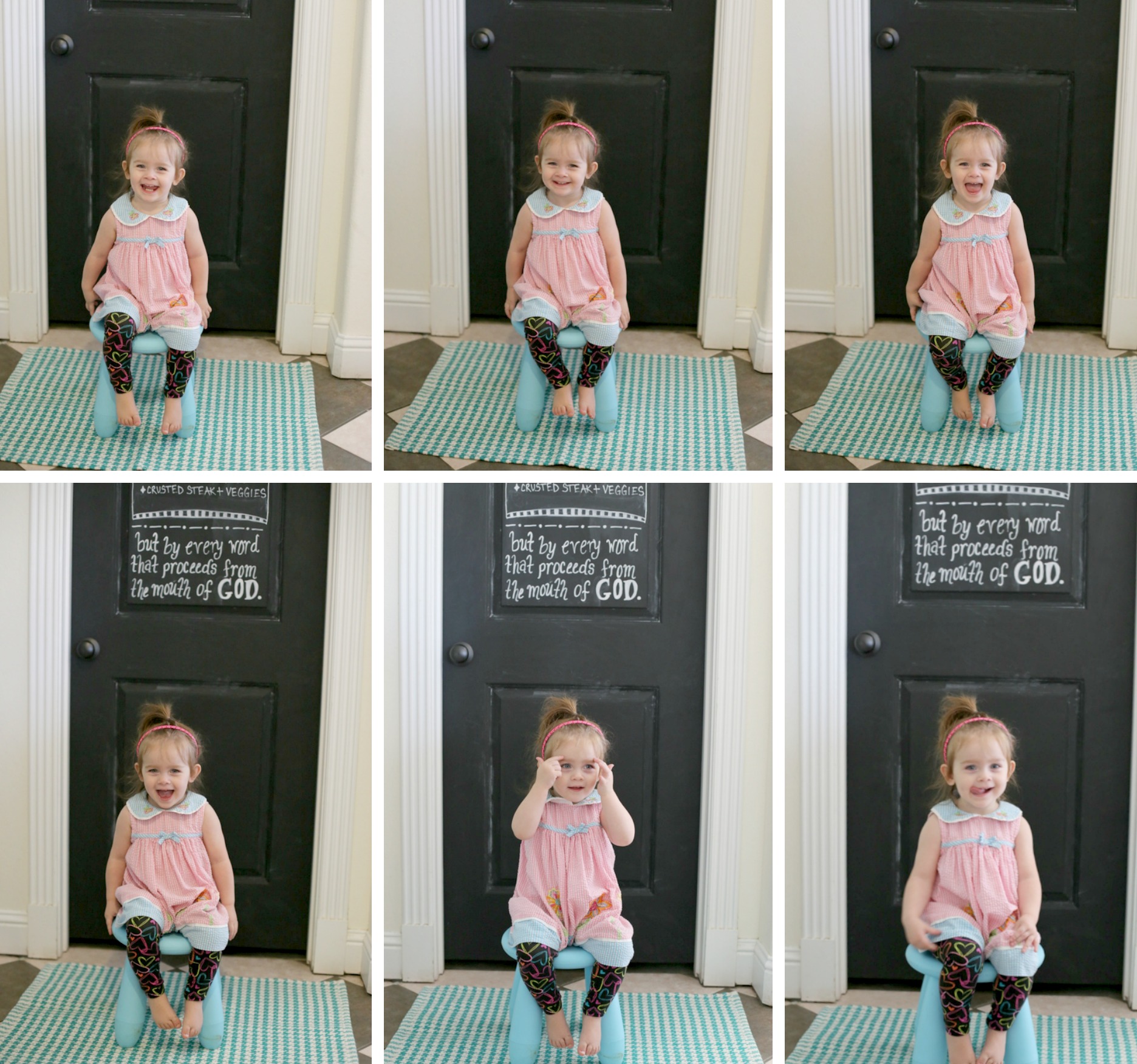 I was getting all set up to take pictures of our pantry door, and when I looked up, I discovered that this adorable little urchin (who dressed herself, by the way) had dragged a stool right into the middle of my shot and was doing some hardcore cheesing.

Of course, I cooperated by snapping a pic or 50 and then scooted her cute little bottom out of the way so I could show you guys what I was actually trying to shoot.

If you recall, this is what our pantry door looked like before. 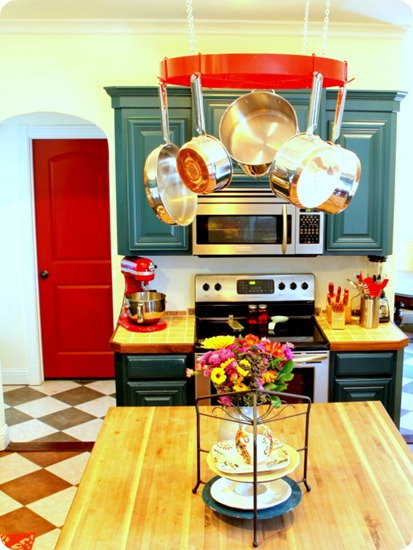 It played nicely off of the rug, mixer, island (which you can’t actually see in this pic), and various other red elements in the kitchen.

But we’ve had a bit of a shake up in the kitchen over the last few months (I am going to try SO hard to do a complete reveal next week, but nobody hold me to that too closely, m’kay?), and the red just didn’t jive as well as it used it.

I thought about all sorts of other statement colors–canary yellow, coral, aqua…and so on and so forth.

But, shockingly enough for my color-loving self, I kept coming back to the idea of black. And I figured if I were going to paint it black, I might as well paint it a useful black. And by “useful,” of course I mean “chalkboard.”

So, the morning of the twins’ party (because, why not add one more thing to the list?), I plopped my pantry door on my island and started slapping paint on it (while my children ate Raisin Bran at the very same island about two feet away). 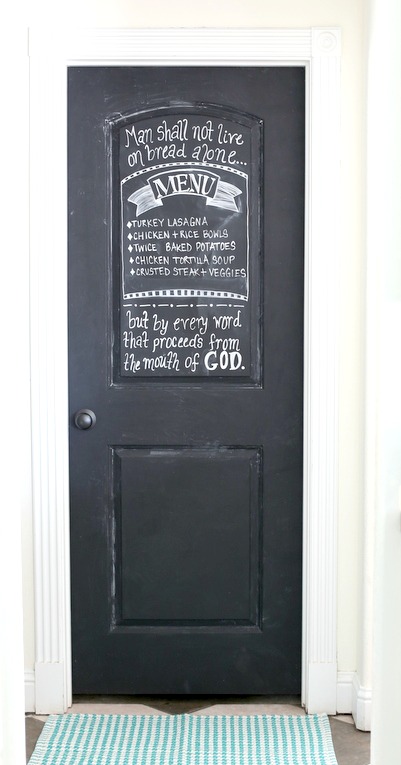 The plan is to let the kiddos go to town on the lower portion of it and then to use the upper part for menu-planning (Ezra, who is a pretty typical firstborn, was very excited about the prospect of knowing what was on the docket for dinner each day…and holding me to it. “But, Mama, the first one says, ‘Turkey Lasagna,’ and Monday is first, so today should be Turkey Lasagna!” Ever heard of the words “not set in stone,” kid?) 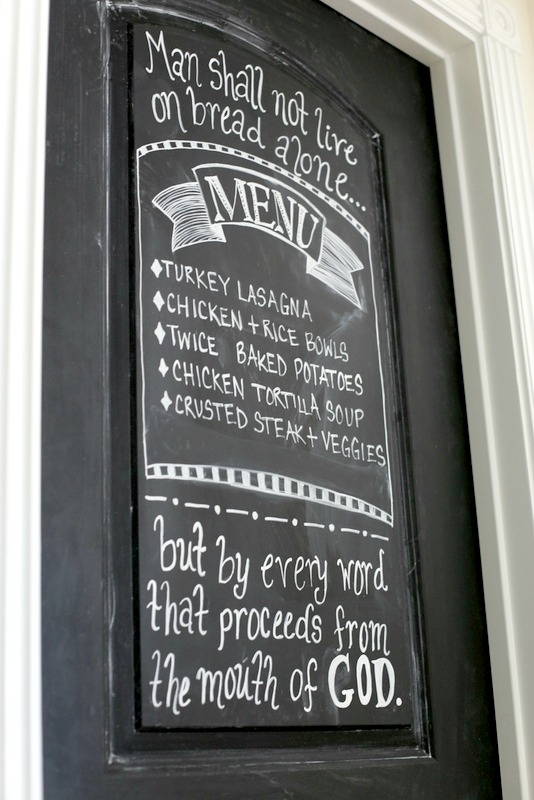 I’m certainly no chalkboard artist, but I do like to play around with fonts and such, so one night, I stayed up way too late writing all of this out, and now that I’ve got it to my liking, I’ll simply erase the specific menu items and replace those each week as we go. 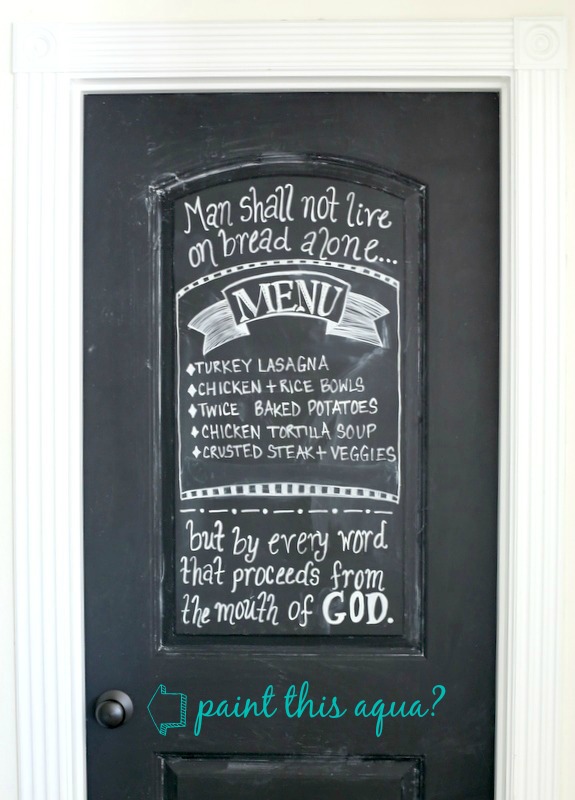 The one thing I do want to do to jazz things up a bit is to spray paint the knob a fun pop of color. I’m leaning toward my beloved blue/green, and I’ve even got the perfect color…if I can just find it. Grrr.

Also, it might be fun to paint that little alcove something other than white to make the white trim around the door really stand out…but I’m not completely sold on this idea, simply because that hallway flows into two other rooms, and the paint transition would probably be awkward.

Oh! And, in case you’re wondering about my “technique” for painting (other than the plopping and the slapping I mentioned earlier), I first lightly sanded the existing paint, and then used a foam roller on everything but the grooves (those I brushed) to apply very thin coats of chalkboard paint. It took about 4 coats, but they went on very quickly, and dried crazy fast, so the whole project didn’t take but about an hour.

Also, I made sure to “season” the whole thing with chalk to make it both quicker to take anything we write on it and easier to erase.

And my “I,” I mean these two handsome fellas. 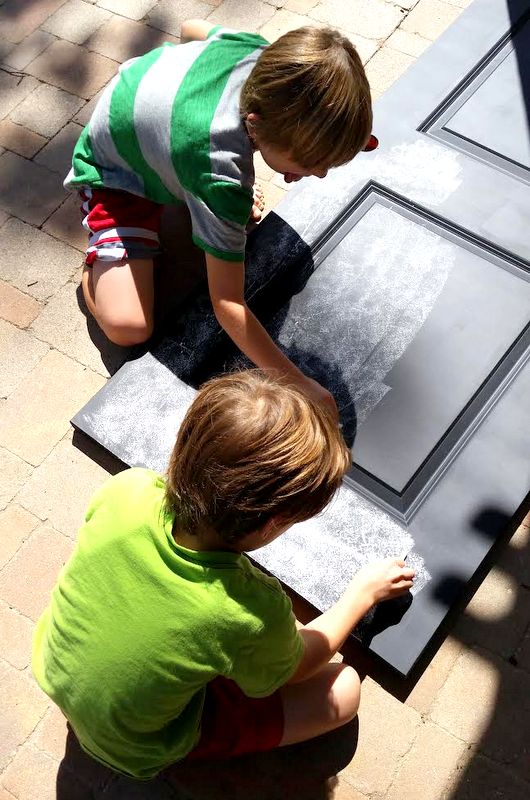 (If you’re not familiar with the concept of seasoning chalkboard paint, all you do is rub the chalk on, using the length or sides of the chalk piece, then wipe/wash it off with a damp cloth, and you’re good to go!).

So, there you have it! A pantry door that hides the often messy shelves within and gives my firstborn yet another way to keep his mama in line.

Any suggestions for wall colors and/or knob options?