I wasn’t sure until maybe a week and 1/2 before the twins’ 2nd birthday party materialized a) whether we were even having a party and b) what it would be like if we did.

Last year, I planned a big outdoor shindig for their 1st birthday...

And then it rained, for like the first time in 2 months…pretty much exactly and only during the hours of their party.

So, we moved everything and everyone upstairs to our big room, which I am so grateful to have. But, I’m not going to lie: it was crowded, nothing was particularly cute (despite hours of prep for several days ahead of time), and I was borderline pouty about the whole business.

This year, I didn’t have the energy for that kind of pressure (cough, pregnant, cough), so when I finally did decide on a semi-applicable “theme”–which then meant that there needed to be a party  to accompany it–I knew I didn’t want to go big. At all.

Of course, I also wasn’t planning on going quite as small as we ended up being after two of the invited families ended up with sick kids on the day of the party. What a bummer!

The plus side? The weather was absolutely gorgeous (which only slightly lessened the grudge I’m still holding against last year’s thunderstorm) and we got to eat yummy food and play with family and friends. Which is really all that little kids (should) care about.

The boys and I had fun making no-bake treats as a supplement to our homeschooling (um, hello? fractions, measuring, reading…it’s practically a flippin’ SAT prep course!) several days in advance, and the rest I did a little at a time throughout the week (up until the ultimate all-day-long, can’t-sit-down, too-much-to-do push of the day of).

The results were pretty much what I’d hoped for: cute, simple, and–you guessed it–very sweet. 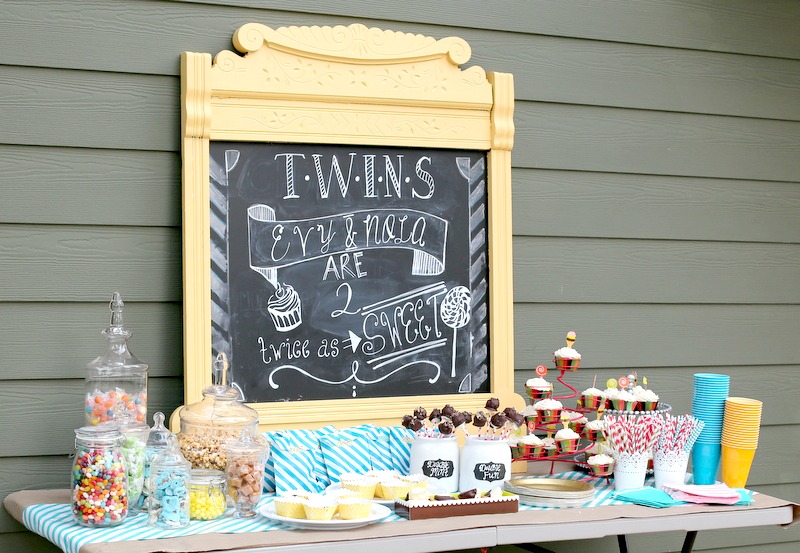 The best part was that I already had almost everything you see on the table here (which was the only thing I decorated, so be prepared for shots from every angle). The wrapping paper I used to cover the ugly folding table…the striped bags for the favors…the party cups…the napkins. Practically all of it, I had either collected on super-clearance over time or had leftover from another party, and it felt pretty good to just toss all of it together in one big, sugartastic explosion of color! 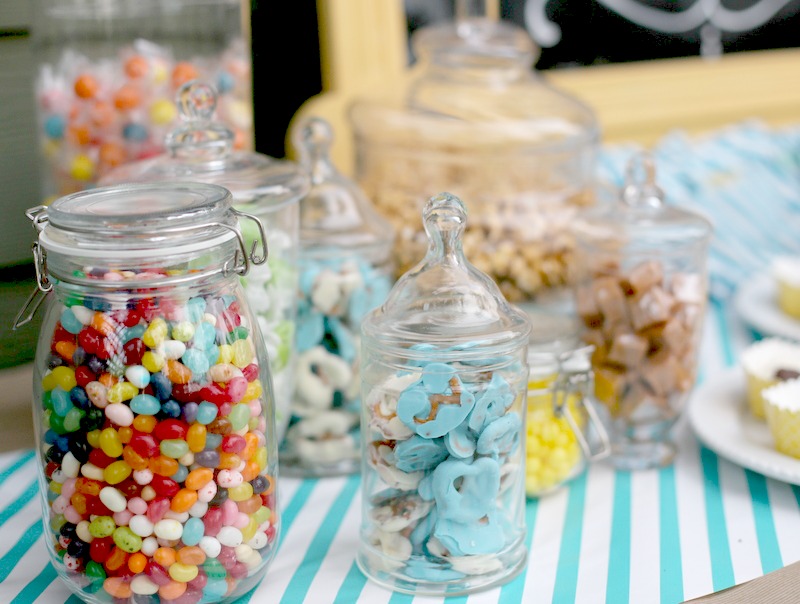 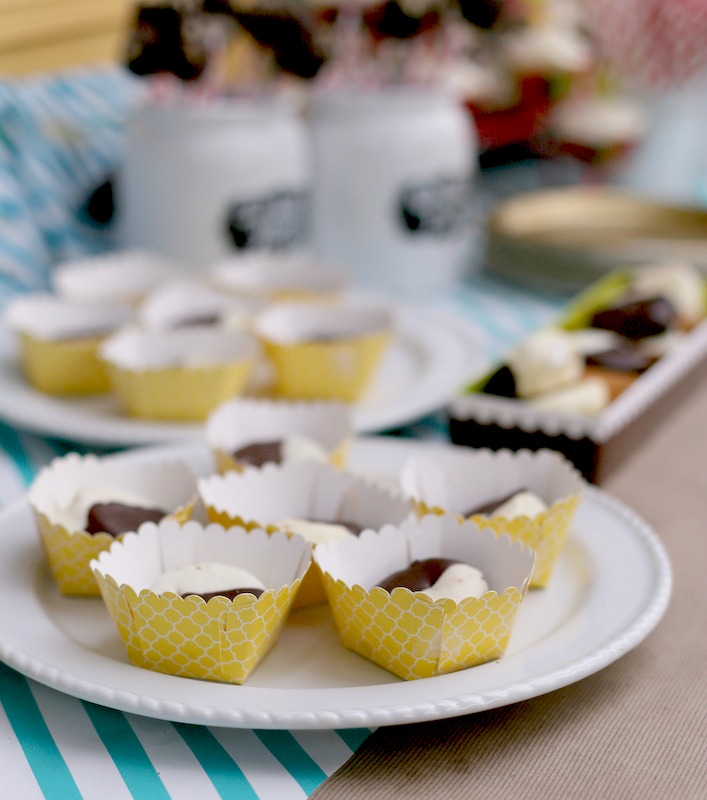 I had ordered a grab bag of items from Pick Your Plum months before, not having a clue what I’d get. But several cute party accessories were included–like those yellow cookie-holders. Okay, so I don’t know what they’re actually intended for, but they were the perfect size for the chocolate-dipped  cookies that the boys and I made, so I went with it. 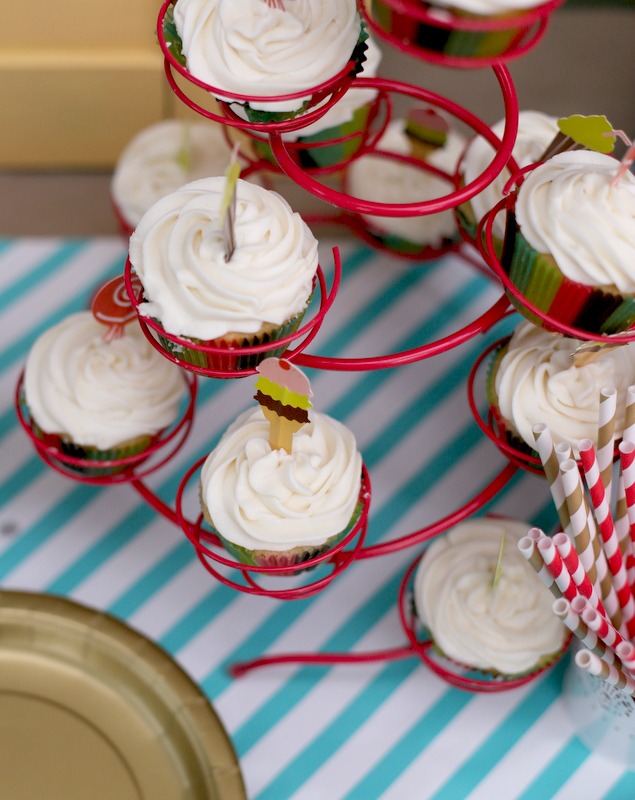 Another fun item from the same PYP haul was these cupcake wrappers/embellishments. They fit perfectly in with all the bright colors and candy-related theme. 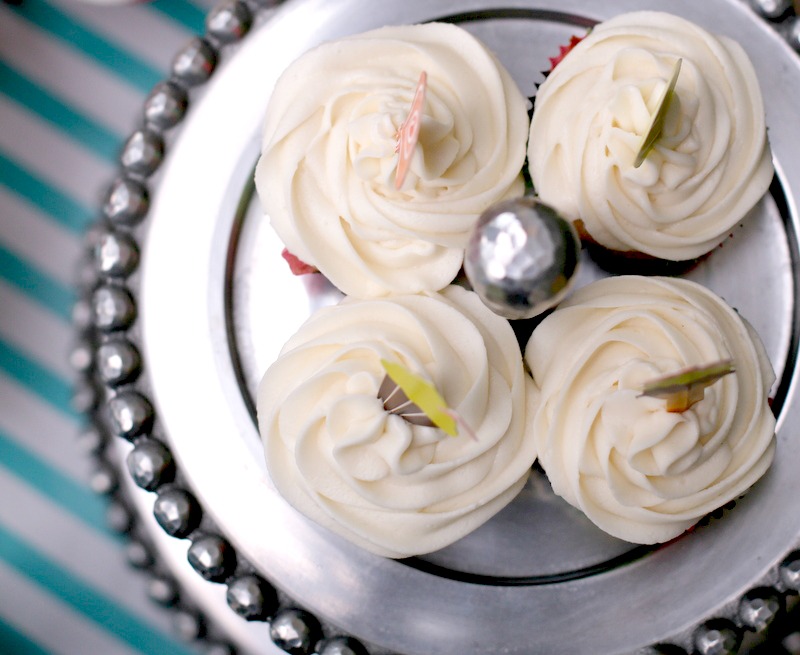 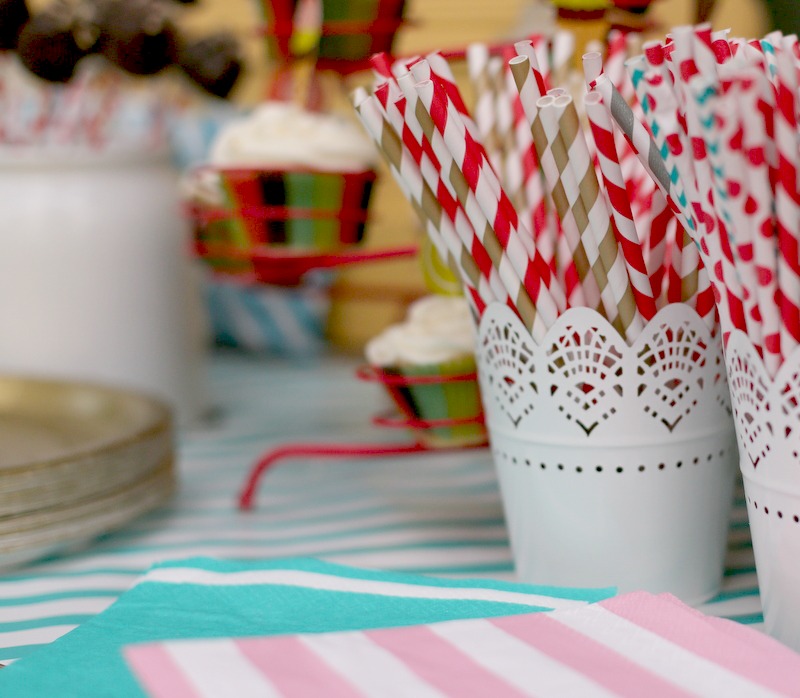 I already had a pretty decent stash of pretty paper straws leftover from bygone parties, so I tucked them into those white laser-cut holders from the Target Dollar Spot. 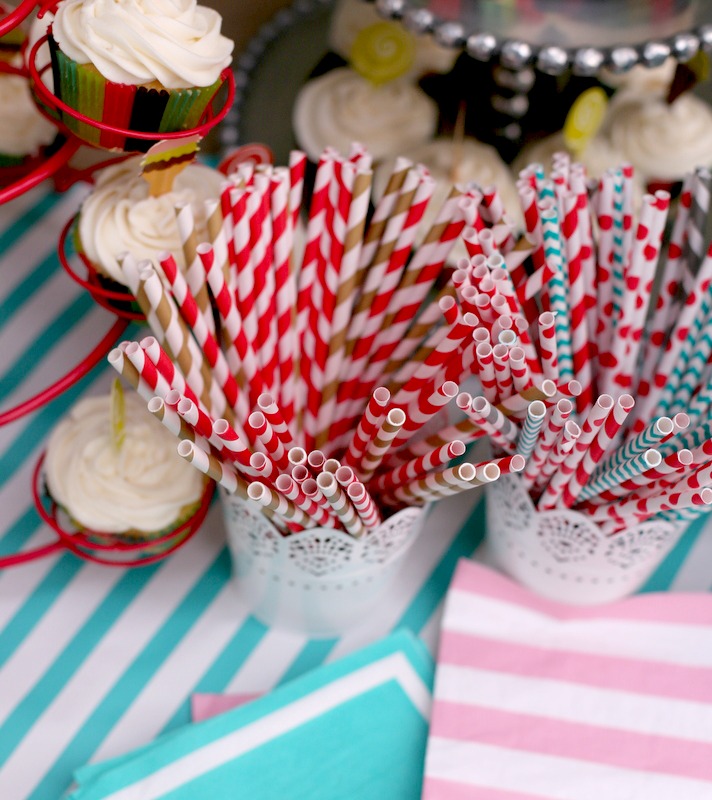 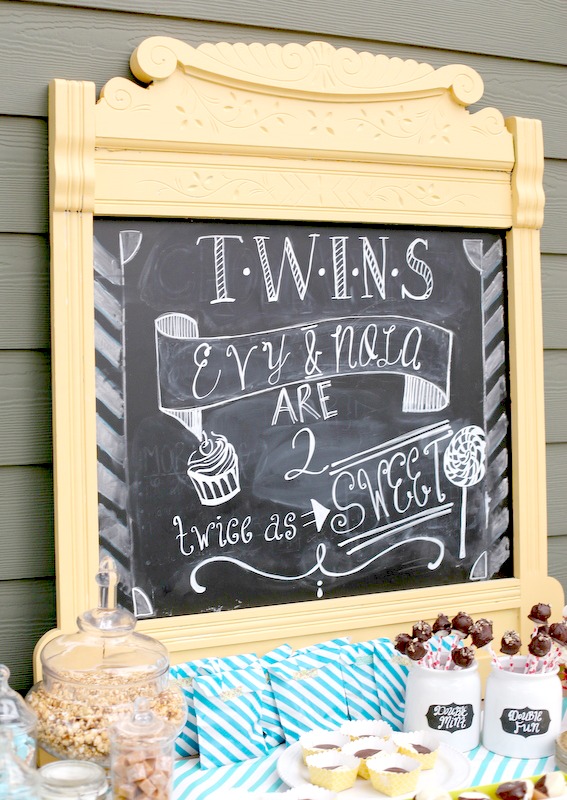 You’ve seen this chalkboard make several appearances already, including in my family command center and my fall-themed buffet reveal. 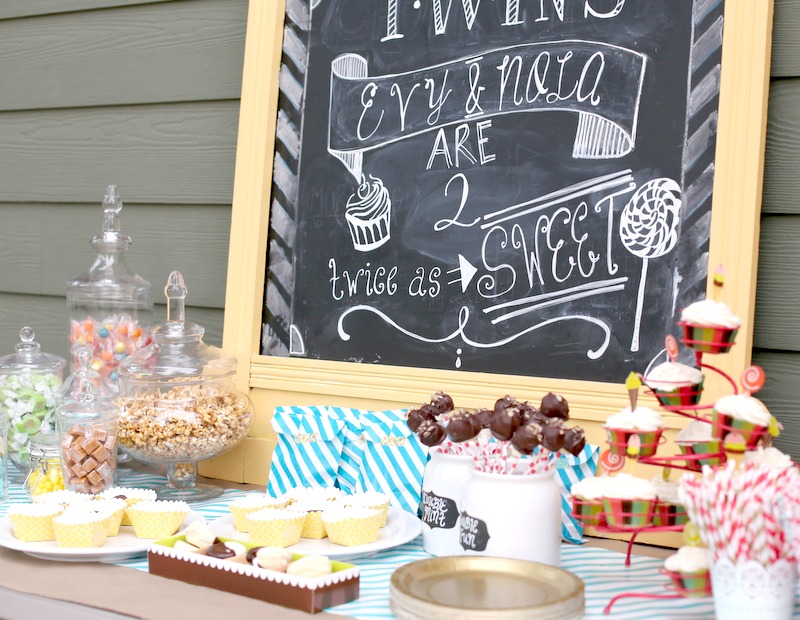 I didn’t really do much with the chalkboard trend when it first started, but now that’s it’s been going strong for a while (and is probably petering out, honestly), I’ve been having a lot of fun playing around with different fonts and embellishments. Although I’m not much good at coming up with the pretty stuff on my own, I usually have a design in mind and am decent at hodge-podging together elements that I scrounge from Pinterest or Google searches. At least, I’m happy enough with the results. 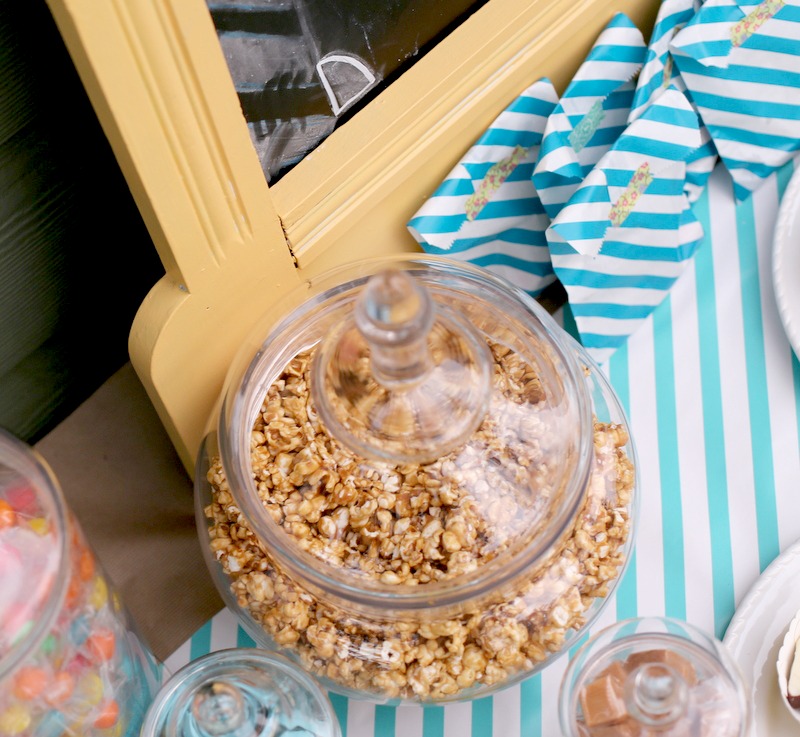 I borrowed the small candy jars from a sweet friend, but the large apothecary jars were my one big splurge for the party, since I knew I could use them again and again, both for future festivities and for decorating/useful purposes in between. They were 1/2 off at Hobby Lobby, but they still cost about $22 each. Honestly, though, after doing quite a bit of looking around both online and in stores, I couldn’t find a better price for something of this size and quality. 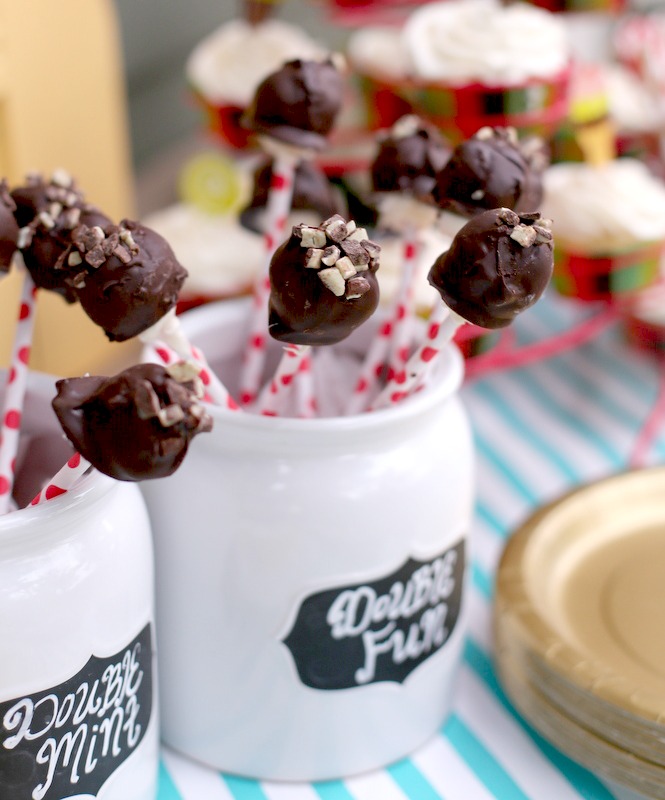 Those little double mint cookie balls were a major labor of love (AKA: a pain in the bohonkus) but I kind of adored how cute they were when all the fussy parts were done. Oh, and they were YUM-MO! (I’ll share more about some of these treats soon).

Of course, pretty-looking treats can only serve as (forgive me) eye candy for so long… 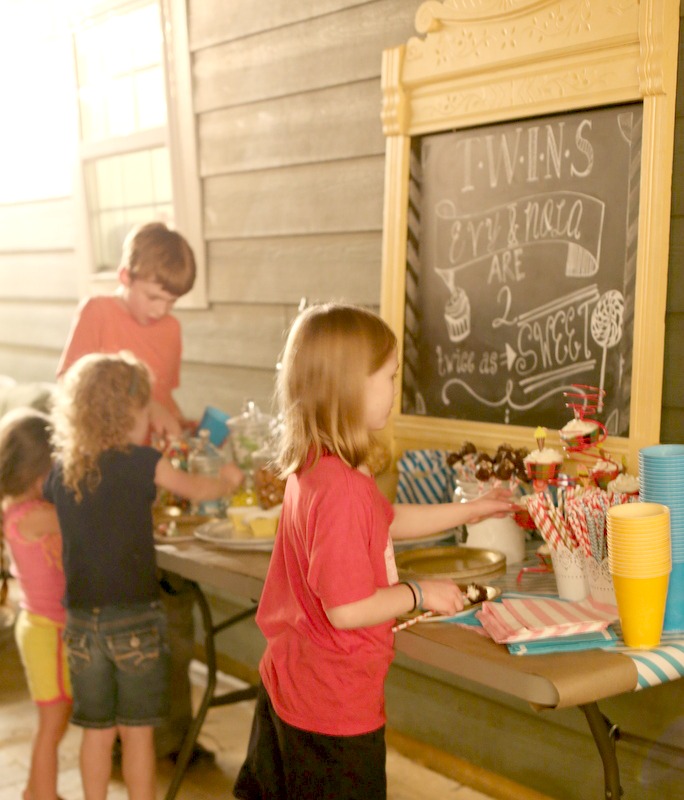 Eventually, they must be eaten. 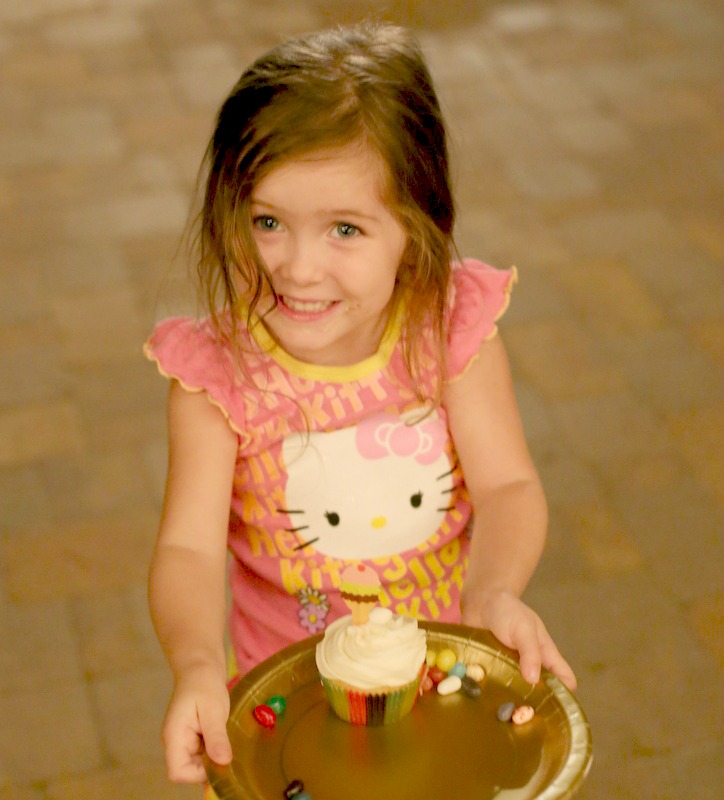 Not too surprisingly, none of the party guests complained too much about that task… 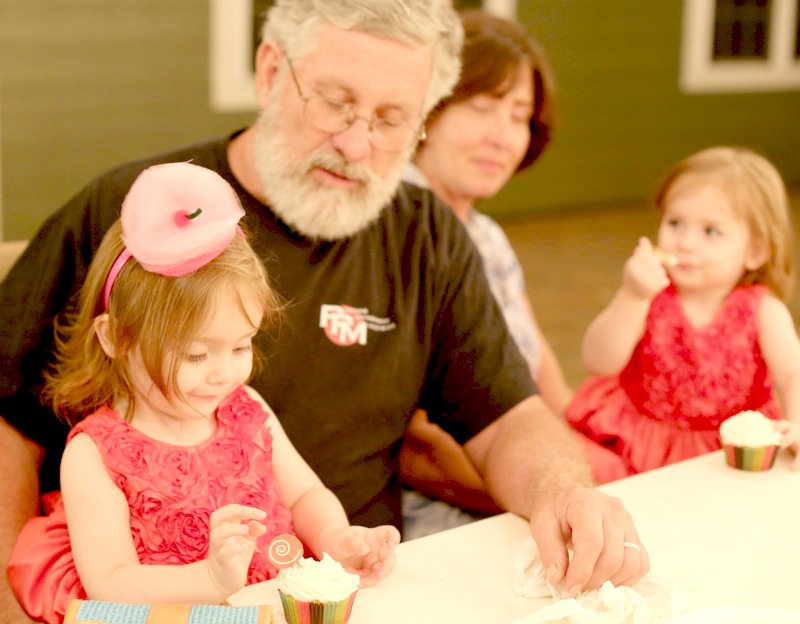 And the birthday girls seem happy to do their part as well. 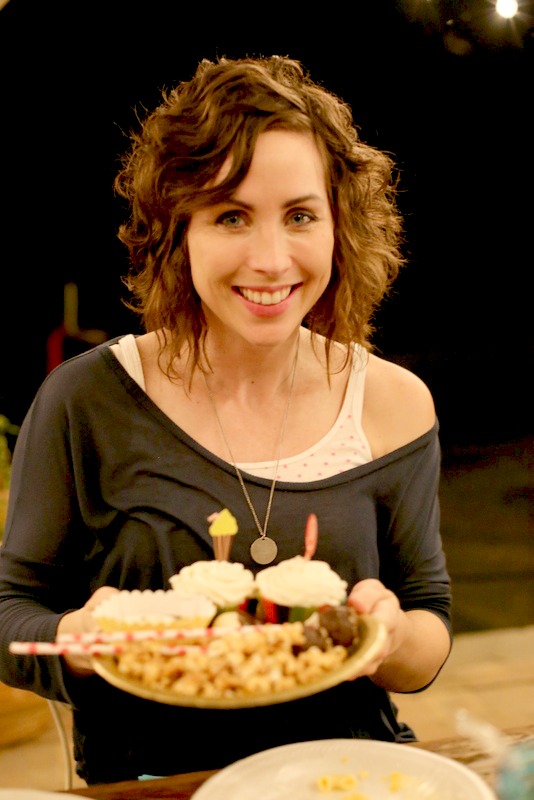 Not that I didn’t try to do my fair share. (This is the plate I made for me and Shaun, but I was so tempted to caption it: “It’s for the baby”).

It was such an enjoyable evening right up until the moment that I crawled into bed and realized that my raging allergies from the week leading up to the party had morphed into something else entirely (evil).

But, after spending the weekend downing Echinacea and Vitamin C and taking as many naps I could cram into a 72 hour period that was already pretty full of schedule obligations, I feel a whole lot better. At the very least, I can breathe out of one nostril at a time for longer than 30 minutes. And that, my friends, is progress.

Ultimately, I’m happy that I made the effort to do something fun for the twins’ birthday, but I’m not so sure they’re getting another one until they’re at least five!

Do you guys throw a party for your kids every year? We don’t. But neither do we really have a system for when we do. Simon and Della get somewhat gypped every year because their birthdays are so close to Thanksgiving (Simon’s is actually on it this year). But we did manage to throw them a mega-bash a couple of years back. And Ezra has gotten something resembling a party every couple of years or so since he was born. I suppose some day, we’ll have to figure out something that makes it more “fair,” but, for the most part, my kids don’t seem to notice too much if one gets a party and another doesn’t. A cookie, though? Well, that’s another matter entirely.