A while back, I spotted a smokin’ hot deal on Old Navy’s website for a soft, jersey maxi dress which was pretty much  universally well-reviewed as flattering and comfortable for–wait for it–$7 shipped. (it’s currently $10, but they pretty much always have a coupon code to stack with that).

I mean, my Goodwill generally slaps a $6 price tag across the board on pretty much anything–be it a denim jumper, 80’s mumu, or designer frock–that could remotely be skewed as something resembling a dress.

So, $7 for a brand new maxi that’s supposed to be decently well-made is pretty much a no-brainer. Especially when I don’t have to leave my house to buy it, and I can return it for free to the store if it doesn’t work.

In fact, it was such a “duh” moment for me that I bought it in three different colors. And, after I posted the deal to my FB page, several of you let me know that you’d bought it too. Heck, even my mom bought it! (Albeit as a gift for my sis-in-law).

I’ve worn all three version of it already, and I’m happy to report that it’s just as comfy as the reviews say.

As far as flattering, I really love the unconventional neckline, which looks like a halter from the front, but is actually a yoke style that connects in the back as well. It shows off your shoulders without being revealing, and, even though it requires a strapless bra, I still would rate the over all comfort level of the dress at an 8. (The material is sooooooo soft, and has a nice, heavy drape).

And, while it’s not technically a maternity dress, the tie is just high enough to work with my belly, and there’s tons of stretch to accommodate the bump.

The only complaint I have, really, is the inconsistency in the sizing.

I wore the navy version with a tie from another skirt on a date night with the hubs with flip-flops and was thrilled with the length, which just grazed the floor. 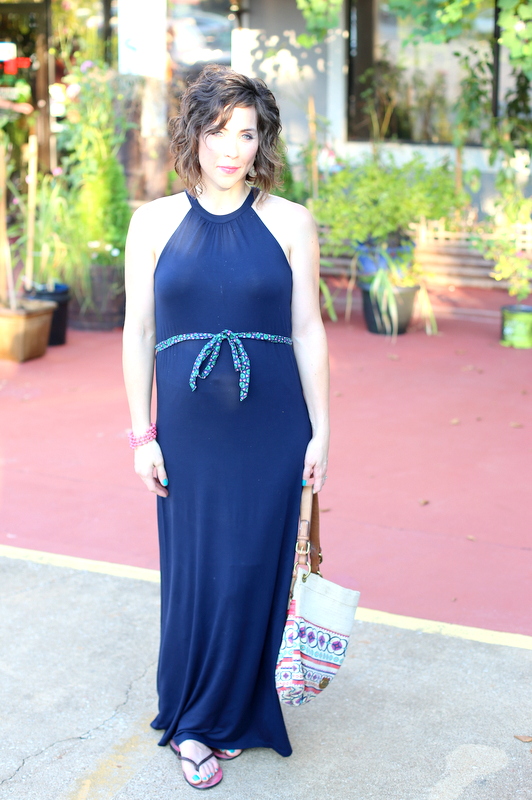 Pardon a) the weird shiny thing happening with my eyes (I tried to hide behind a pole to avoid the direct glare but clearly was only partially successful) b) the speckles on my top (you can stop wiping your screen now; they’re not going away). I think it’s toothpaste. But really, as a mama to five small humans, I can never be sure. 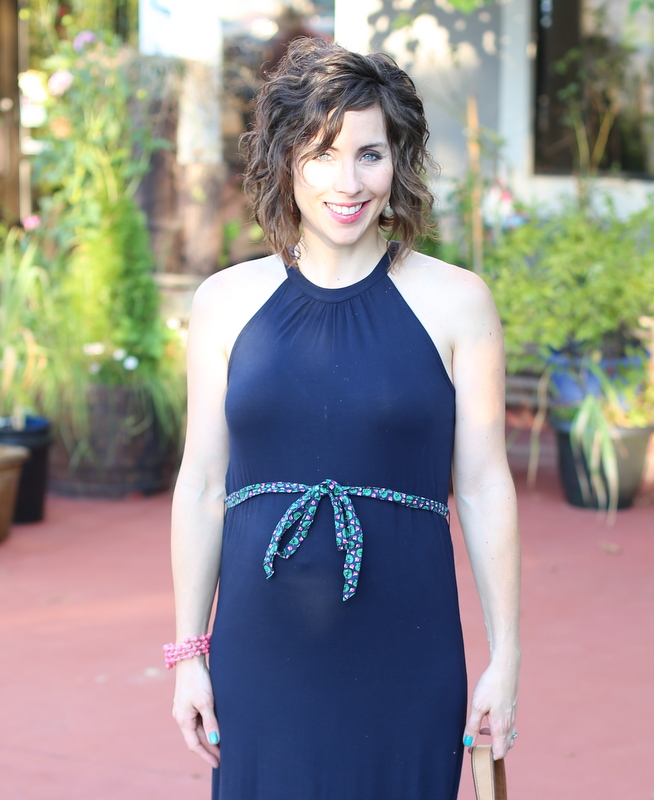 But then, there was the teal version, which I didn’t get a great picture of (this would be a cell phone shot snapped by Ezra). 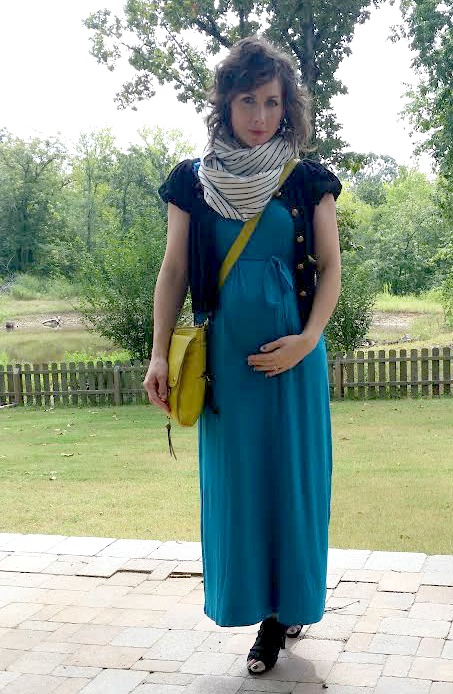 It was considerably roomier all-around, but a good 3-4 inches shorter, even though it was supposed to be exactly the same size. I would have loved it a lot more if it had had the extra length, but I’ll probably stick to wearing it with flats in the future, which should help.

And finally, I channeled a bumblebee when I wore this ditzy-print black/white version to church last week. 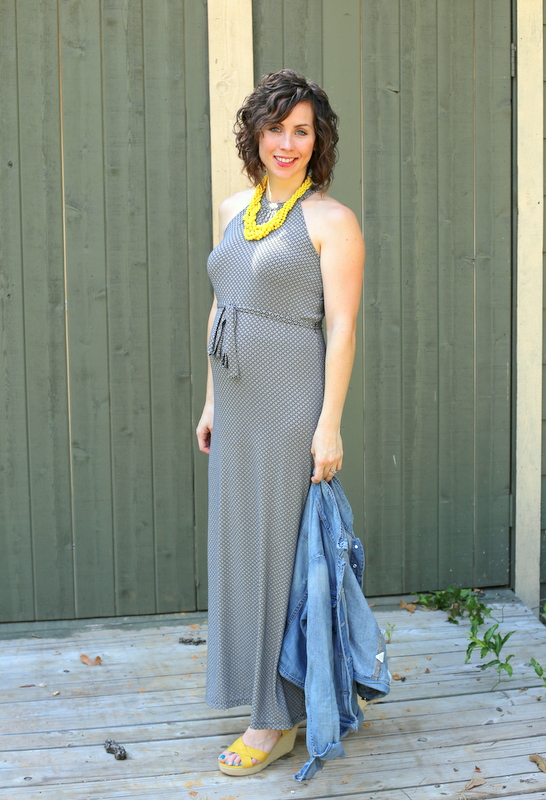 It’s a size smaller than the other two and was definitely clingier overall and not as long as the first one (though a smidge more so than the second…I think). 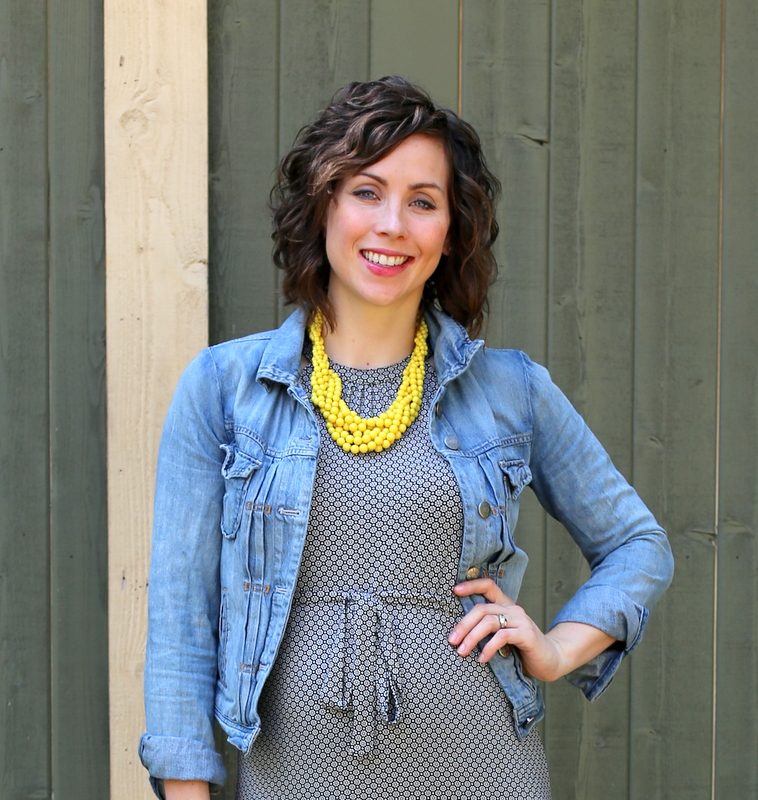 I’ll be putting away the smaller size until after pregnancy, but I can see getting plenty more wear out of the other two (especially the navy version) this fall.

Sadly, the navy is the only one left and only in a size large, but if you stumble across it for a steal in stores, or if they decide to restock, it would totally be worth a $7 “splurge,” in my humble opinion–whether you’re pregnant or not.

Scored any great deals (thrifted or new) lately? It’s so rare to score such an amazing price on something online that I was pretty stoked. As much as I love the thrill of the hunt at Goodwill or even an occasional run to the mall, there’s just something extra-special awesome about getting a steal on something from the comfort of your own couch.