So, my little blog hiatus wasn’t exactly planned, but neither do I plan either my own or my kids’ illnesses. So, what can you do? (Besides take as many naps as you can).

Yuckiness aside, though, can we talk about this for a minute? 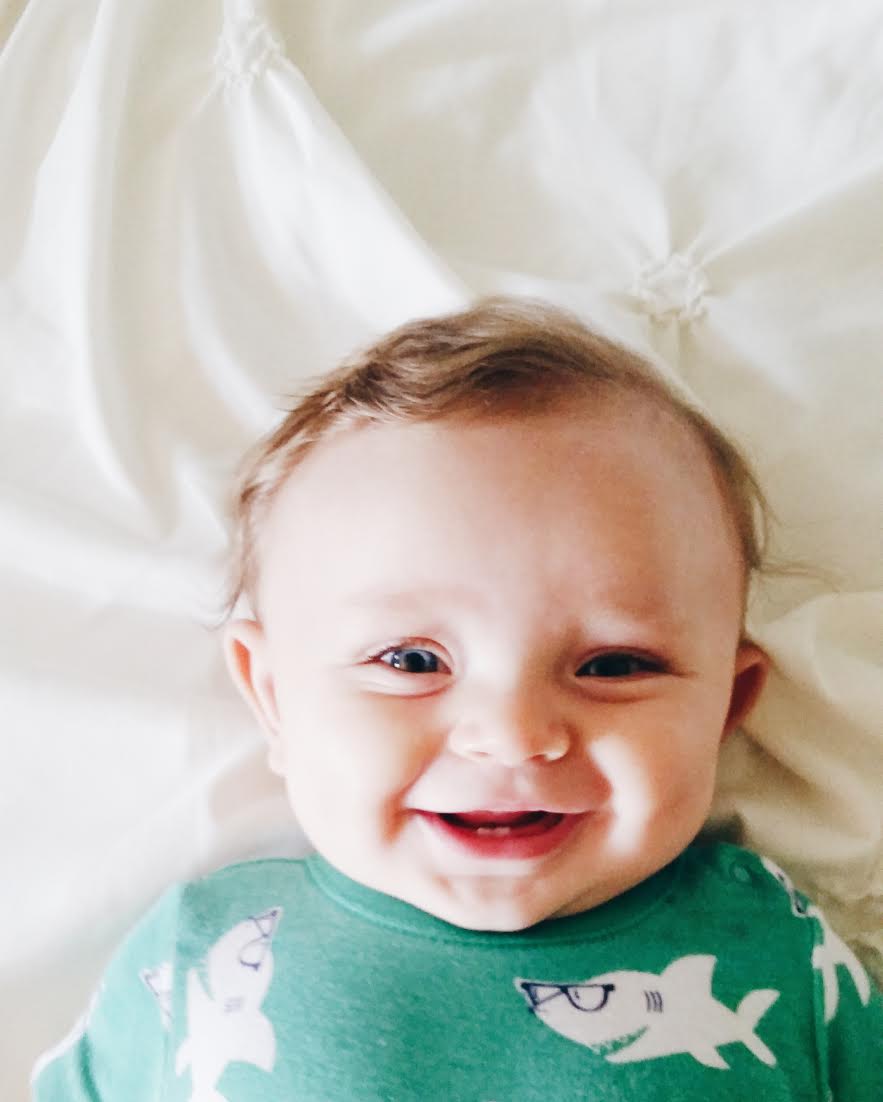 Talk about what, Abbie? The fact that you’re the blessed mama of the happiest baby alive? Or that said happiest baby has a serious (and seriously adorable) case of teacup ears? Or that sharks don’t wear glasses?

No, sorry. Guess I should have been more specific.

I want to talk about these. 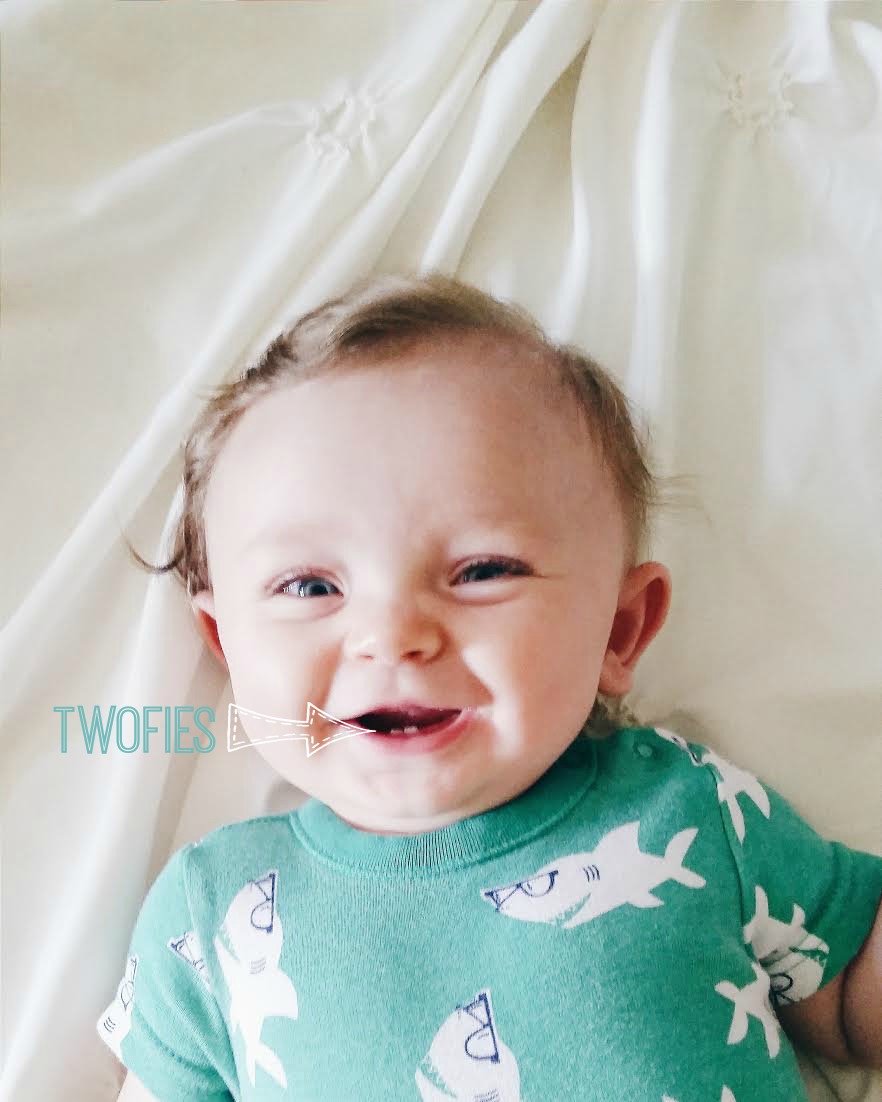 Ignore the awkward spelling (I just had to; I mean there are TWO of them) and the fact that when you read the title of this post, you were probably like, “Tuh-whoa Fies? What are those??”

And let’s just zero in on the fact that my child…my beloved 6th baby…who was just born yesterday (wasn’t he?)…has teeth. Plural.

Because here’s the thing. He got that first tooth at 4 months. Which might be no big thang for some of you.

But for a woman whose other 5 children didn’t even think about teeth (no matter what 4-month-old Ezra-Drool-Buckets teased to the contrary) until they were 8-months-old (shoot, the girls were more like a year), it’s a very big THANG!

We are not early teethers, in other words. Or early anything-elsers, for that matter. The boys both took their first baby steps right around their first birthdays (Simon was on the money), but they didn’t really cruise until 14 months or so. And the girls were more like 14-15 months before they took any steps at all.

They don’t sit up ahead of time or roll over particularly quickly or crawl before 8 months.

And you know what? I am a-okay with all of that. Honestly, I’m guessing most mamas with more than one can understand when I say that, after your initial gung-ho frenzy of, “YOU CAN DO IT! Waaaaaalk, my son. WAAAAAALK!” with the rest, you’re like, “If you walk by the time you get to kindergarten, we’re good. Until then, slug it up, bud.”

I mean, right? Children are SO MUCH HARDER when they’re mobile.

Which is why I was a bit alarmed when that little charmer up there popped out a tooth at 4 months and quickly followed it up with an encore performance.

(It’s just teeth, but it could mean he’s an early bloomer in other areas). 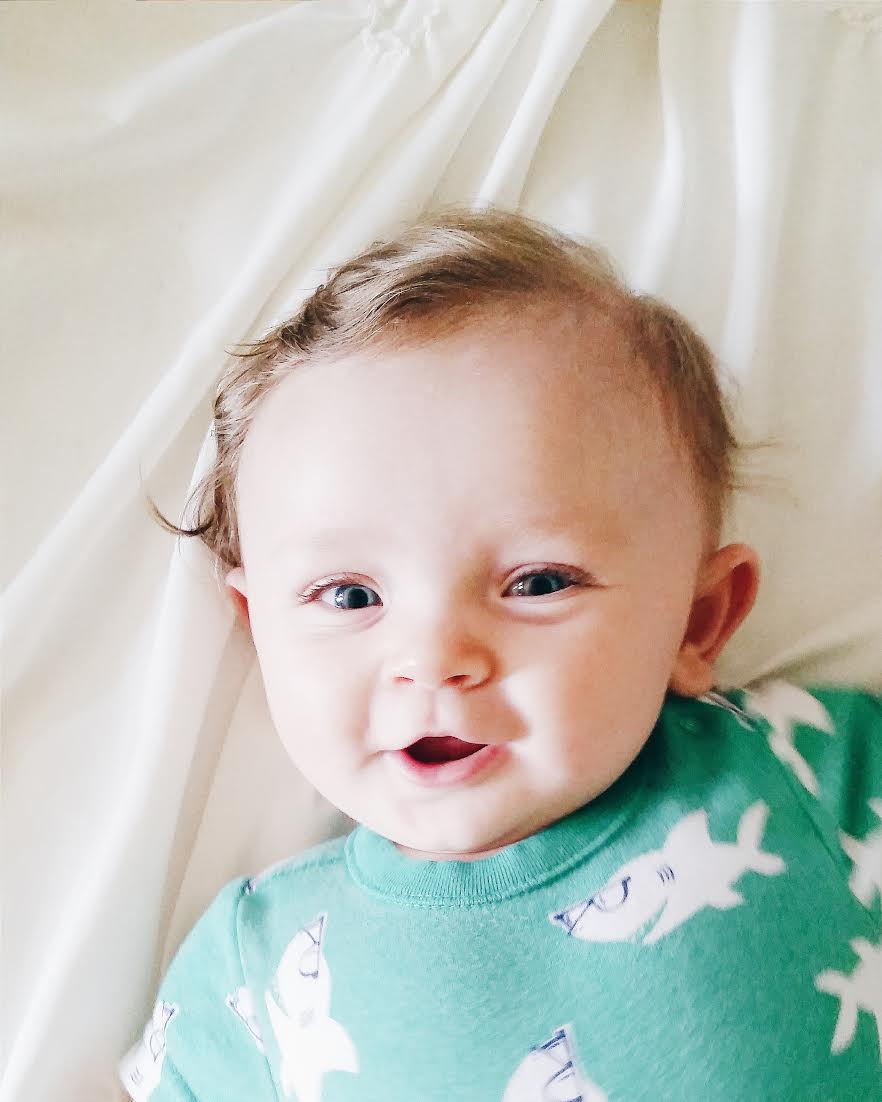 And then looked all smug and proud of himself.

I mean. He smiled at 3 days old (and never stopped), but smiling doesn’t make messes in Mama’s pantry, so that early milestone was nothing but P-A-R-T-Y!

And, honestly, I don’t mind the fact that he can almost sit up on his own already (he can on a soft surface like a lap or a couch). But when the pulling up starts, I might just start pushing him right back on the ground. JAY KAY! I would never ever. And I honestly enjoy seeing every single one of my kids reach those landmark moments.

But, up ’til now, I’ve been able to go a good long while before the landmarks crawled right up in my lap.

And that was quite all right by me.

Apparently, somebody knows he has five siblings to keep up with.

So, what about you guys? Were your kids early or late bloomers? Or a mixed deal? I would definitely say that my kids have always been average to late…until Theo.