First of all, can I just say a great big THANK YOU for all of your help and input on what color we should paint the new house? Y’all are awesome. I love how passionate you guys are about your opinions, and you definitely gave me plenty of great options to consider. Between here and social media, I had somewhere around 400 responses, so suffice it to say that I have NOT gone through all of them to calculate a percentage for each, but I did read every one, and if I had to guess, I’d say that the order of preference went something like:

3. Teal (although, interestingly, depending on which post was being commented on and which social media was being used, this was the MOST popular choice).

Not too surprising, I suppose.

I know I’m in the minority with my love for deep, saturated colors, and I honestly don’t think that there’s a bad color among them.

I thought it might be fun to show you all three options in the home designer program we use (which is called Home Designer Suite for all of you who have asked, by the way). 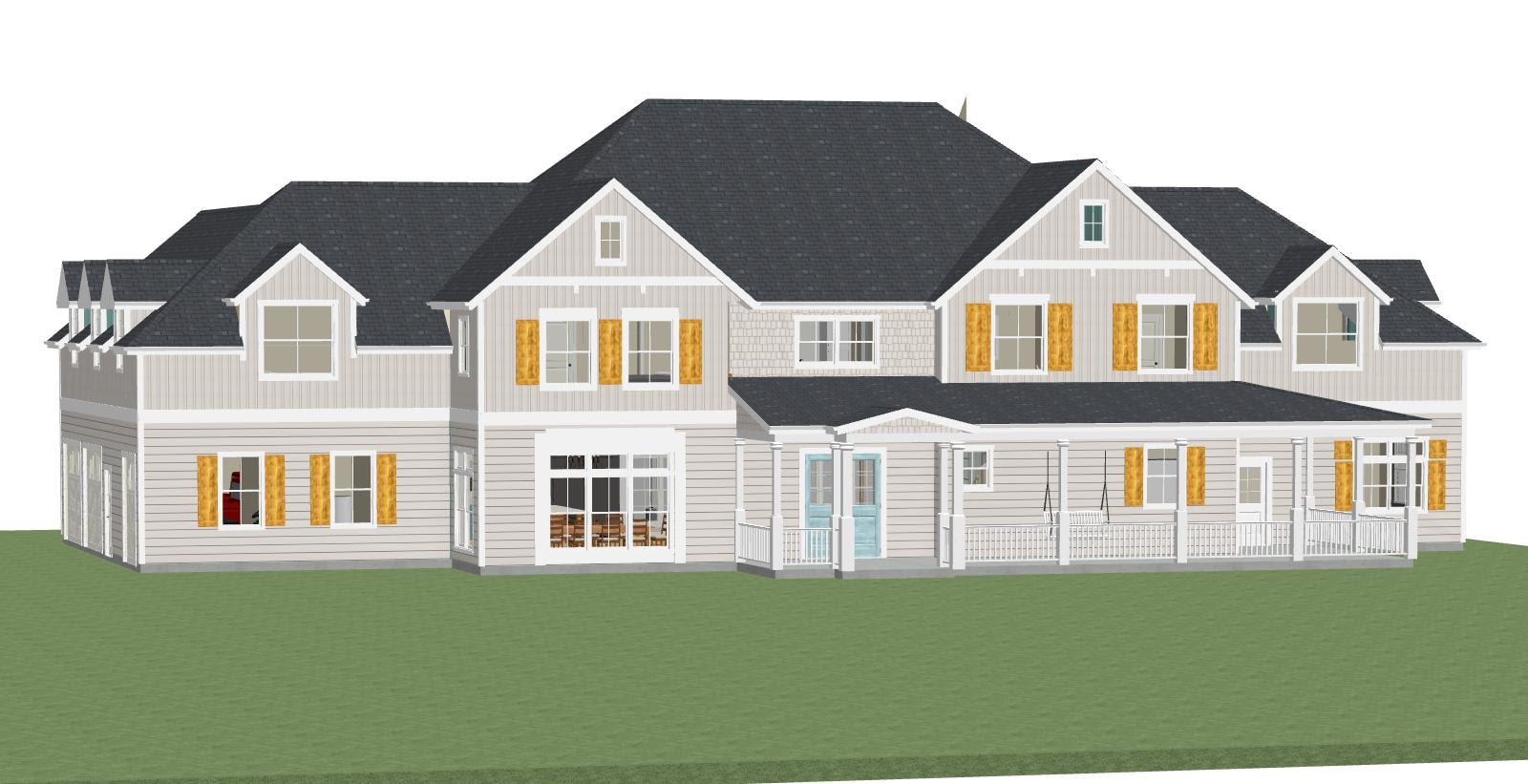 We use the cheaper version of the program, which won’t let you do more custom details like changing the roof of the porch only to metal or changing the upper portion of those gables to a shingled siding or making the board and batten more widely spaced, but all of those will be the case, if you can squint a little and imagine that.

So, my thoughts on this version: I like it. Obviously, the colors in the program are a little cartoonish/flat, so I can imagine the contrast of the minty door plus the stained shutters popping so much more vibrantly against the neutral background. It doesn’t make my heart sing, though. Not saying that that couldn’t change with a little tweaking, but this one isn’t doing it for me at this point. 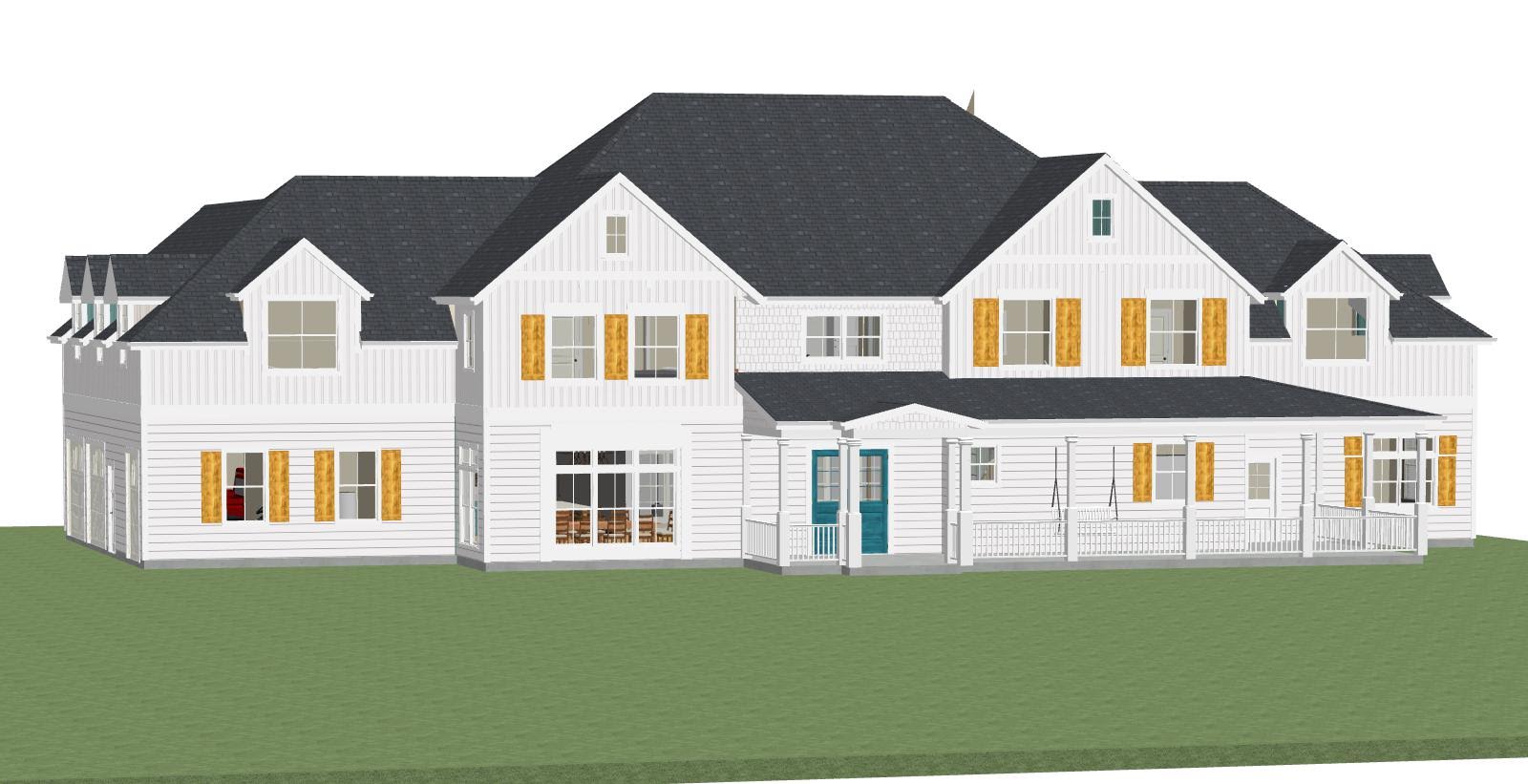 Several of you suggested using the teal on the door of the white version, and…while I don’t think the colors are quite right in this version (I didn’t spend a long time obsessing over getting just the right shade), I was surprised to discover that I didn’t dislike the white on such a large scale. I mean, I love white houses, but I really didn’t think it would work on the size/shape of our house, but…I don’t mind it. My main objection is that I love trim, and the trim just doesn’t contrast enough against the white. Again, that could probably be fixed if I absolutely nailed the color choices, but…I’m not completely sold. 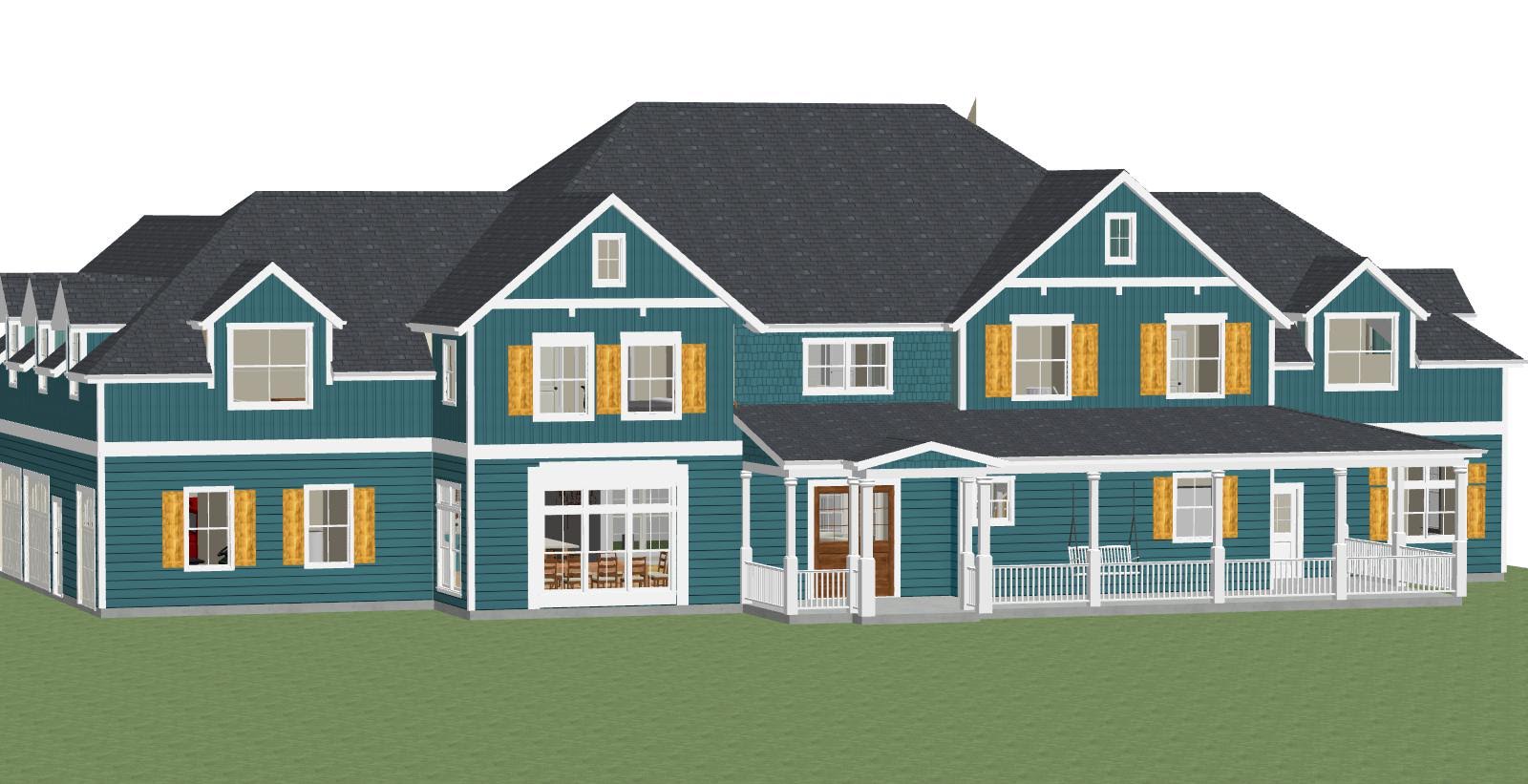 The first time I saw this in the house program, I cheered. I know it’s too much for, well, most people, but it just made me happy. Our trim will have a farmhouse silhouette (so slightly layered and chunkier at the top and bottom), and I love how much it would pop against the dark color.

Y’all did raise a couple of good points that I’ve been mulling over, and here they are:

1) What about fading? Honestly, our current house color is at least as dark as the Riverway color we’re considering. We painted the first part almost 8 years ago when we first built, and then we added on a section about 5 years ago. Shaun claims that he can see a difference between the two (because the paint of the first section has faded a bit), but it’s certainly not anything you would notice unless you stand back and swivel your head from side to side between the two under close scrutiny. All that to say that I’m not too worried about fading.

2) Won’t you get sick of such a trendy color? This one made me smile. It never occurred to me that this was a trendy color. In fact, its deep blue/gray/green seemed–if not conventional–somewhat classic, at least to a color lover like me. I didn’t feel like I picked it because I had seen it around a lot (I actually had never seen a house this color until I realized that I had chosen the swatch twice at Lowe’s and came home to see if Google could show me what it actually looked like on a house). Also, we won’t have any other houses near enough to us to compare or annoy, so as long as I don’t get sick of it (could happen, who knows?), it won’t matter.

I do have ONE BIG PROBLEM with the teal, though. The house of my dreams has shutters like these: 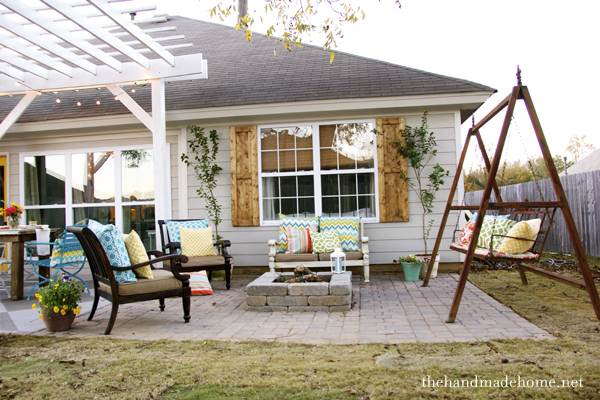 But back to the problem: if I have shutters, I do not want the door to be the same color. It’s too matchy-matchy for me. HOWEVER, with such a saturated house color, I think that the door needs to be at least somewhat subdued, without completely disappearing into the exterior since it will be recessed beneath a deep porch. At first, I thought a subdued coral. But that would only work (in my mind) for a single entry door, and I am drawn, more and more, to double front doors–especially on a house of this scale (when a single door might end up feeling a wee bit puny, even with window lights + trim surrounding it).

And I can’t quite get okay with the concept of big stately painted French entryway doors–especially when the ones that we’re considering buying are SO pretty in their natural wood state.

Which leaves me with a WHOLE lot of stained, coordinating wood if I stick with my stained shutters.

The more neutral colors that would allow me to have my shutters + a brightly colored door (if I so choose) are all just a little “meh” (at least to me). But then I see my beloved deep teal, and I can’t figure out how to configure my accents so that it’s not just a whole bunch of blue and brown (which is potentially too country for the look that I want).

Suffice it to say that I have not yet fully decided on the perfect combination of elements to create an exterior that does, indeed, make my heart sing.

After seeing the mock-ups in the house program, do you have any further thoughts?
I’m not used to feeling so stumped about such things, since I usually know what I like, whether it jives with anyone else’s preference or not. Perhaps the problem here is that I know a little TOO well what I like and can’t seem to force all of my preferences into harmony with one another.

0 thoughts on “A Virtual Look at the New House Colors”