Ask and you shall receive.

I get lots of emails about “how to build a house from scratch,” and one of the #1 questions I get asked is: “Will you share your house plans/layout?”

Well, we built our first house 8 years ago, using a house-building program that doesn’t exist anymore, and–honestly–the chances that anyone was going to follow our plans to the letter, or even that closely, were fairly slim, so the answer was always, “Sorry, but no.”

This go-round, though, we have the current plans easily available, and I’ve had so many people ask that I thought I’d give you a little peek at the way we’ve chosen to lay out our rooms.

So, without further ado, this is our 1st floor: 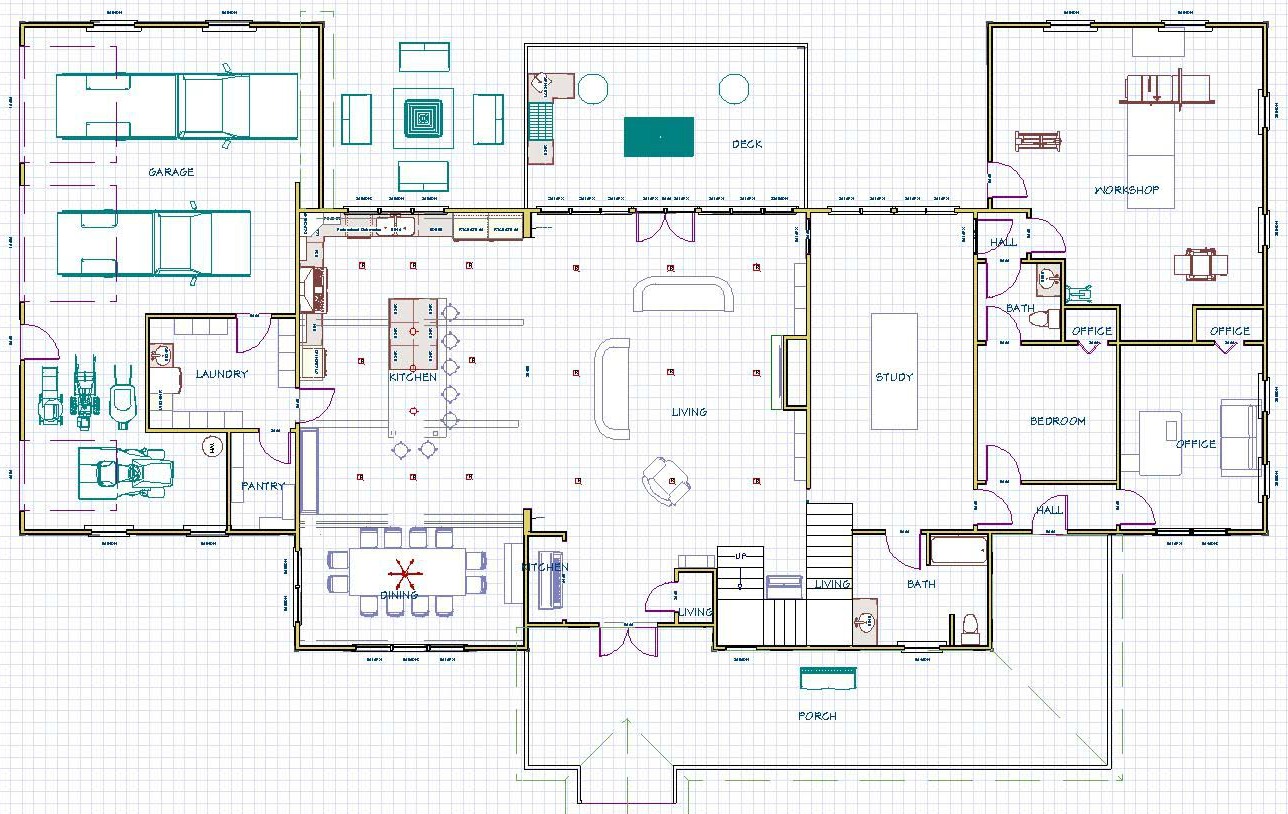 Did you grab your magnifying glass yet? I know. It’s a bit hard to see in such miniature proportions, but this is as big I could make it and fit it all in.

We’ll have a dining table that seats 12 or more (Shaun will build it, of course), and a 12 foot island. Our current island is approximately six feet long, and we take up every spare inch of it already, so we’re trying to plan ahead for future kiddos/visitors.

In case you can’t tell, the range is on the left wall of the kitchen, and the sink faces out the back of the house up the tree-lined hill. It’s quite possible that the giant window over that sink is my favorite thing in the entire house.

To the left of the kitchen, where it says “laundry,” that will actually be a mudroom/laundry hybrid. The plan is to put a washer/dryer downstairs to augment the upstairs family closet, but who knows? Maybe we’ll just stick with the one laundry room.

The “study” to the right of the living room is actually our schoolroom. It has big windows too. Sigh. I love natural light.

There are two bathrooms downstairs, and one of them is attached to what will be the guest suite. Shaun’s office and and workshop round out the downstairs of the “right wing.” Oh, and those little “rooms” labeled “office” off of the real office and the guest room are closets. But you probably already figured that out. 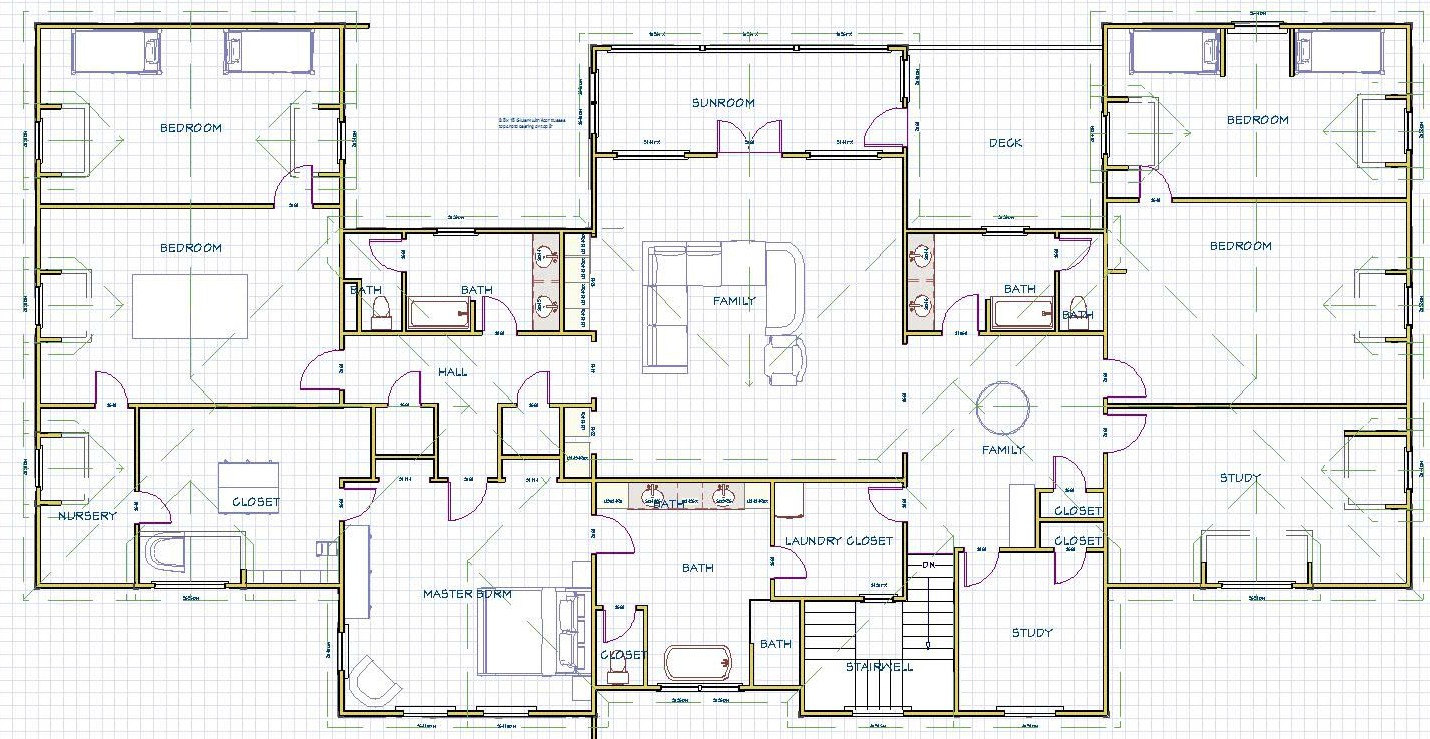 As you come up the stairs, the first room on the left is our family laundry/closet. This was originally going to be the nursery (nope, not for anyone specific; just in case), but I couldn’t get happy with how closely situated it was to all of the noisy stair traffic, so we moved it. To the far-most left corner of the house.

For realz. This one makes me chuckle because it looks like we’ve exiled our baby to the attic or something. I have never used a baby monitor in my life because I’ve never needed it. I’ve just always been able to hear when the baby is crying. But I think a monitor will be pretty necessary this time. However, our kids do nothing more than sleep in their nurseries. They have never really doubled as playrooms–probably due to the fact that, right about the time they’re actually old enough to play with anything, they get kicked out by a younger sibling! So, I’m good with the remote location.

As far as the other kids’ rooms, as I mentioned, we chose to go with large common rooms for the boys and the girls. We’ll have builtin bunk beds against the back walls, so now, all we’ve got to do is produce even amounts of each gender offspring from here on out, and we’re good to go!

Who knows but the Lord who/how many we’ll have in the future, but we’ve built in enough leeway so that, even if we max out the bunk beds, there are still spaces to add more beds.

The boy + girl wings are completely symmetrical, with the bedrooms at the back of the house, an open/play/common area in front, and a bathroom. In between, we have our “big room.” There’s a sun room attached to the back of it, and–even though you can’t see it in the program because we hadn’t come up with the idea yet–the area above the sun room will be an open loft that looks down into the big room. Since it will be facing our DIY big screen on the opposite wall, Shaun jokes that it’s the “balcony” seating for our movie watching.

Seriously, though. We could put on (very small) plays in this room. In fact, I imagine we will.

The “study” you see to the right of the stairs is actually a “toddler room,” for napping and such, but it could definitely be converted into a conventional bedroom for an older kid or two in the future. Or an upstairs guest room. Whichever.

And then, to the right of that, where it says “study” yet again (my, how studious we are), is my office/craft room. Or Shaun’s office, depending on how many puppy eyes he makes at it. (Every time he walks in there, he sighs wistfully and says: “I love this room.” Real subtle, babe. But I don’t blame him. It’s a cool room).

Oh! And the room that the stairs open up to labeled “family” will just have a table in it for overflow from homeschooling or card games or…whatever.

I’m so excited for all of the family gatherings, friends, Bible studies, guests, missionaries, whoevers we’ll get to host in this house.

Obviously, we put a LOT of thought into these plans. I have no doubt that we’ll discover things that we wish we would have done differently once we’ve actually moved in (8 years from now…heh), but for now, we’re blissfully unaware of that/convinced that we nailed it. Or…something like that.

Also, while I’m not sharing specific pricing with you (Shaun’s not on board with doing that, which I get), because of our location (E. Texas is a pretty cheap place to build), the fact that we live outside of the city limits (and can, therefore, avoid many of the costs associated with city codes), and the fact that we’re doing the vast majority of it ourselves again, a house of this size/customization is surprisingly affordable. Not cheap (well, cheap for the size, yes). But far from crazy either.

ANYhoo, I’ve just topped 1,100 words blathering on about all of this, so I’ll stop right this second.

But, as always, if you have questions, I’ll be happy to answer as best I can.