I mentioned last week that Shaun and I took a quick 11th anniversary trip to Vancouver over the weekend (Thursday through very-early Sunday, to be exact). I don’t trust myself to be completely accurate, but I think it’s the 5th-ish time that we’ve managed to tack a getaway onto one of his work trips, and, while I’m not a fan of the fact that he had to stay behind and work, I loved our time together.

Vancouver–as I was “warned” multiple times–is a beautiful city. Tons to see. Tons to do. Tons to eat (as always, we were especially keen on that last part). 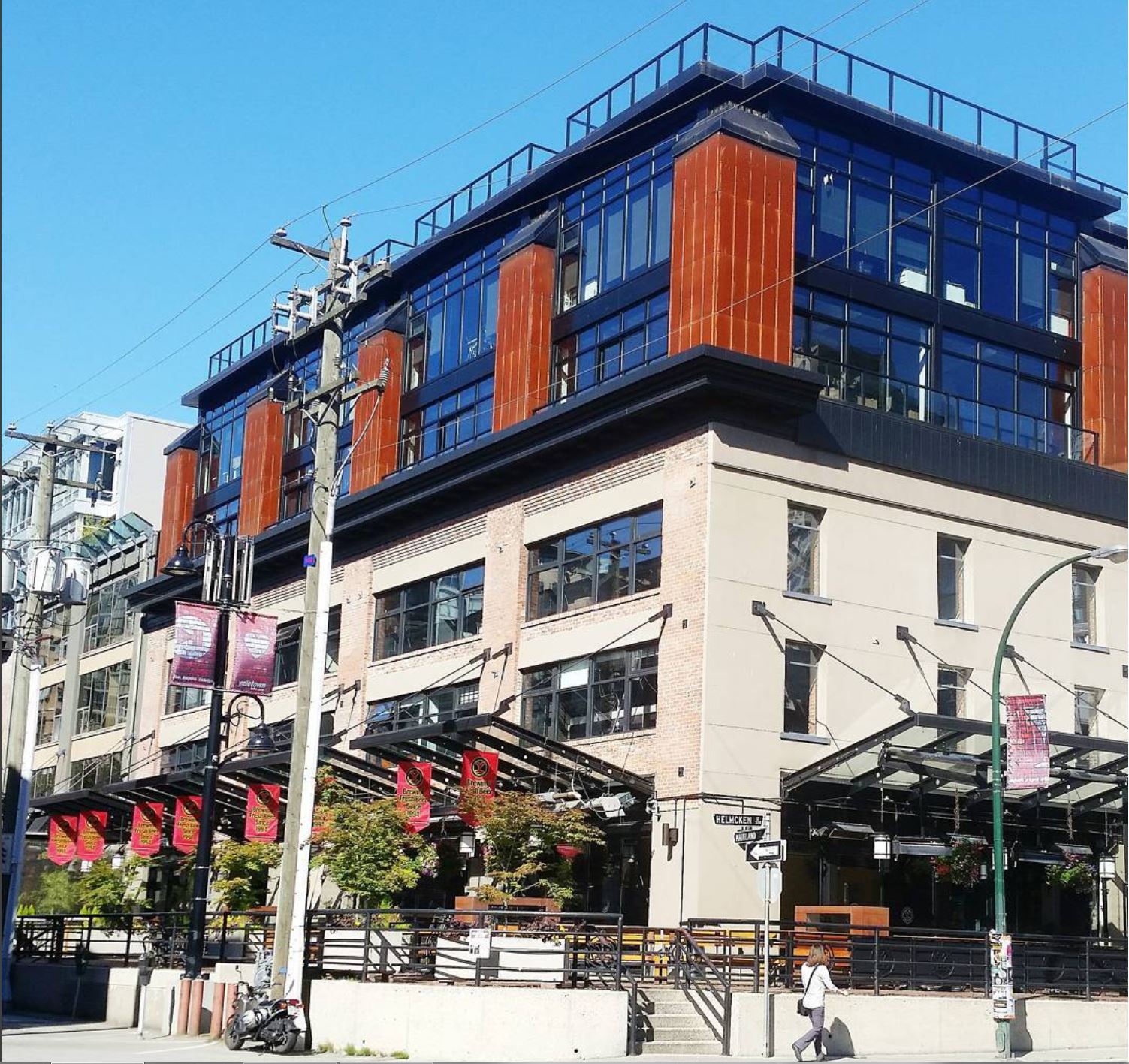 {Random pretty building, but I was really impressed with the attention to detail throughout the city–especially all of the hanging flower pots}

We started out the trip pretty sleep-deprived. One of Shaun’s client’s QuickBooks program crashed the day before we left (naturally), and Shaun literally worked all day and all night (minus 1 1/2 hours when he slept fitfully) to fix it in time for us to catch our flight. I got something like 4 hours of (equally fitful) sleep, so by the time we got up at 4 AM and spent the next 7 hours traveling, we showed up in Vancouver pretty zonked out and ready to sleep for 3 days straight.

Of course, you would have thought something more than lack of sleep was affecting me on the way to the parking garage when I fell off of my 4″ wedge and, overbalanced by the bags I was carrying, came crashing down on my right hand/knee. (Why do I have a feeling there’s a video of this on the internet somewhere?). We were actually being directed by some sort of City Guide to the parking garage at the time, and she came running back offering to call 911. I’d like to say that was an overreaction (it was), but maybe it was just a dramatic fall.

We got situated in our Airbnb rental, where I nursed my “wounds, and we opted for a 90 minute nap…which morphed into 3 hours when one of us (we still don’t remember who; see: zonked) didn’t set the alarm correctly.

We knew we didn’t want to do anything complicated our first night there, and we love to eat good food, so we spent a while scoping out a great restaurant on Yelp. We landed on Le Crocodile because of its fantastic rating + interesting menu, got all fancied up (it was our actual anniversary, so we made a bit of an effort), and set out on foot, since it was only 10 minutes away. 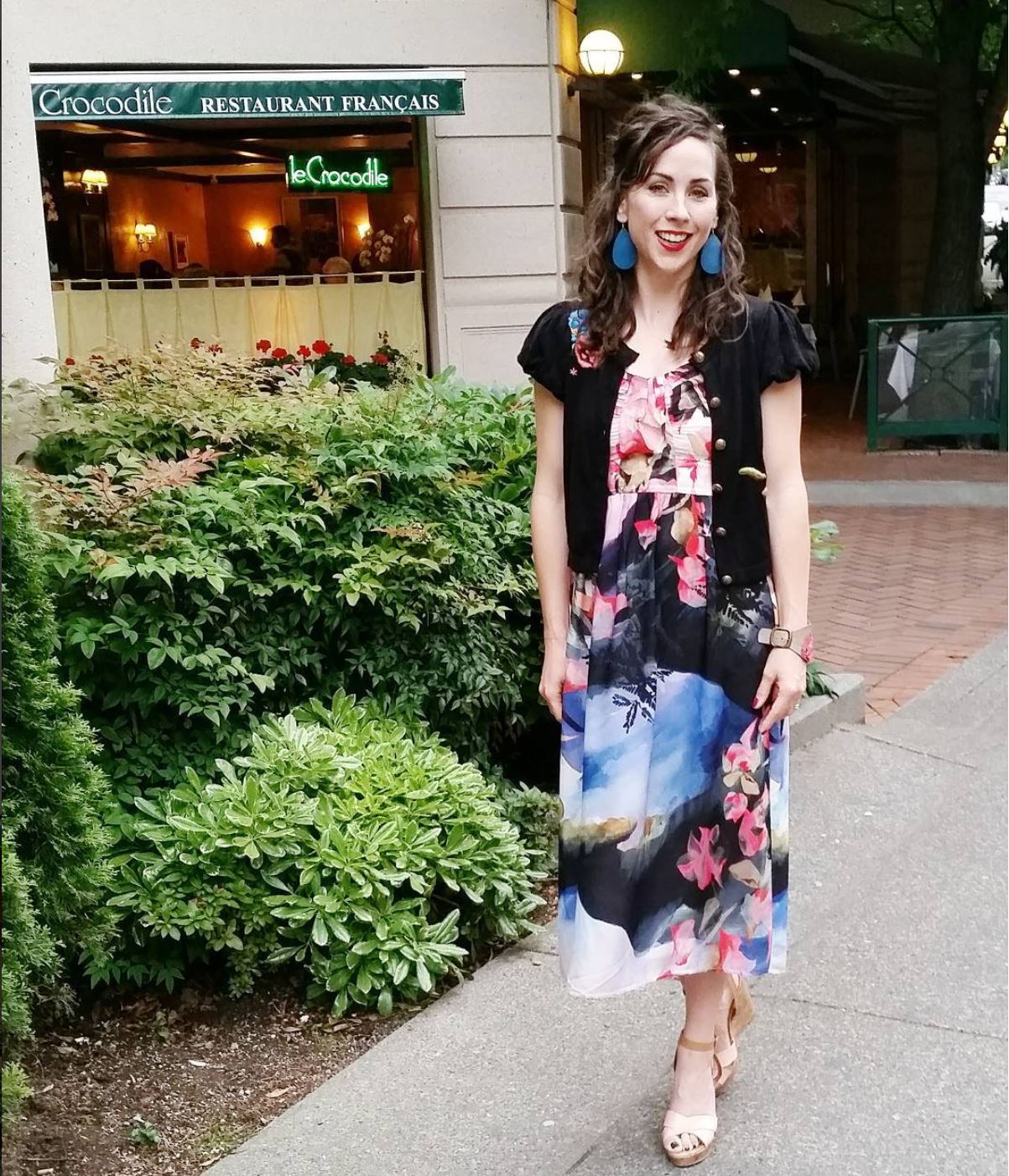 After the episode with the wedge heel, Shaun was giving my 5″ dressy wedges some serious side-eye, but this time, I managed to stay upright and only ended up with 6 small bleeding blisters to match my mottled, purple right knee. Oy. The things we [I?] do for fashion.

The entire experience at the restaurant was one of the best we’ve ever had. The decor was tasteful and elegant (but not stuffy) and reminded us of our favorite restaurant we found in France two years ago. And our waiter, who was actually French and named Pierre, was thee best waiter we’ve ever had. Absolument (yup, I had to Google that). 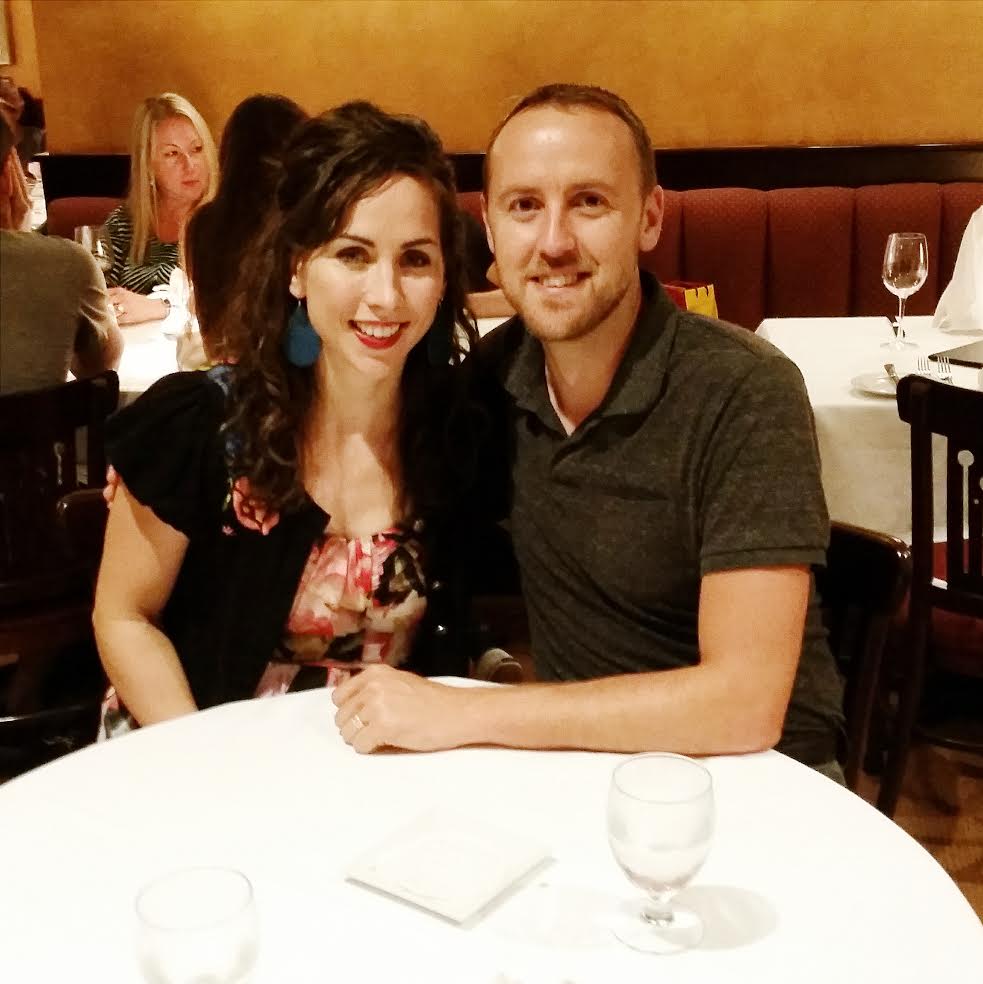 {Pierre even snapped our pic! Woohoo! We’re terrible about taking pictures together on our trips}

If you’ve ever been to a place where they drone through the specials of the night, and you find yourself taking a quick open-eyed nap, then I wish you could have seen Pierre do his specials spiel. He enunciated every word, varying his facial expressions and punctuating the important parts with little hand flourishes.

We were kind of mesmerized. By his accent. And by all the choices. Okay, but mostly by his accent.

Everything was flaky or buttery or savory or crisp, depending on what it should be.

The only miss was Shaun’s Chilean Sea Bass, but the second Shaun mentioned that it wasn’t his favorite, Pierre whisked it away and asked what he’d like instead.

Also, because apparently your 11th anniversary is the one where you attempt to gain 5 pounds in one sitting, we said yes to dessert. Thing is, we couldn’t decide. So we asked for Pierre’s opinion, and…after listening to the ones we couldn’t decide between, he winked at us and told us he’d bring us a surprise.

Moments later, he came back with a pear sorbet “palate cleanser” that, had it been our actual dessert, would have gotten no complaints from us. It was divine.

But then, he showed up with profiteroles (because “they are actu-ah-lly French”) and proceeded to smother them with rich, warm chocolate from a gleaming silver carafe. 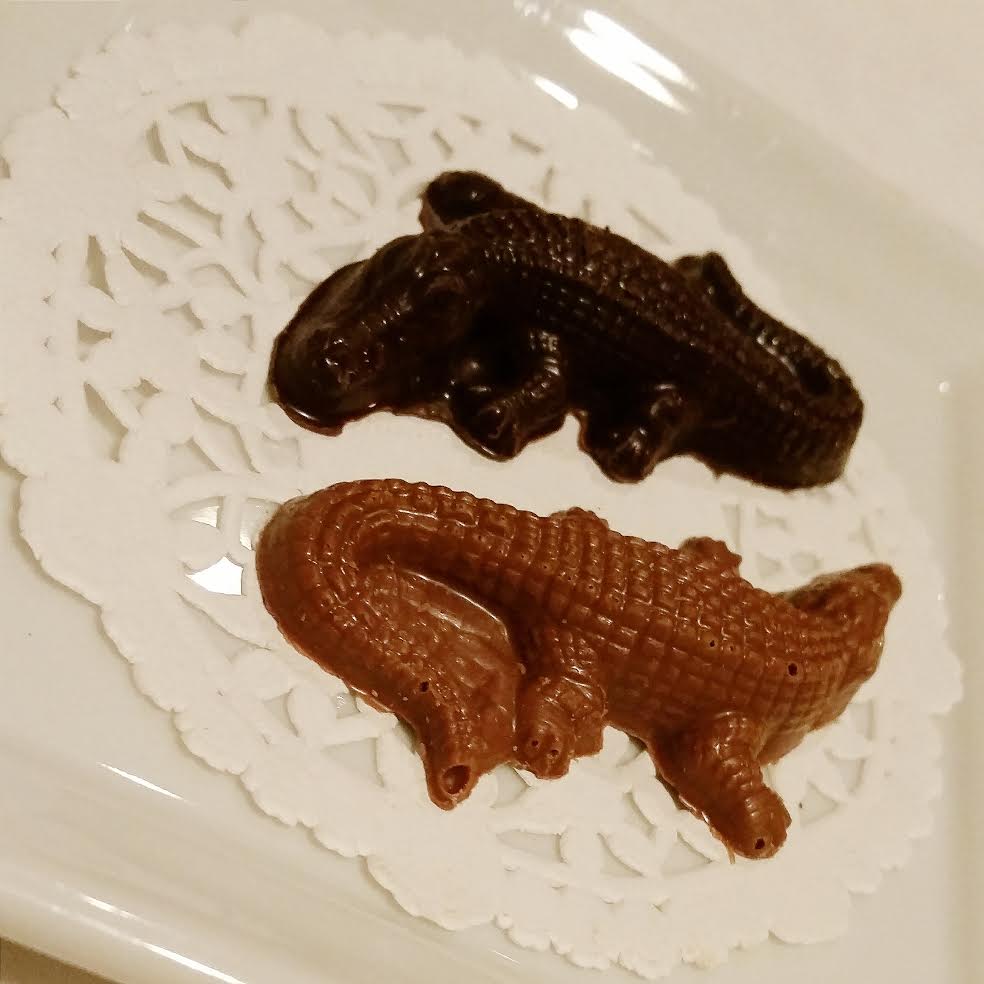 And, yes, I know I’ve just written way too many words about that meal, but it really was epic, and I can’t recommend Le Croc (as Shaun insisted on calling it) enough.

The next morning, we continued our gluttony with a feast at PureBread… 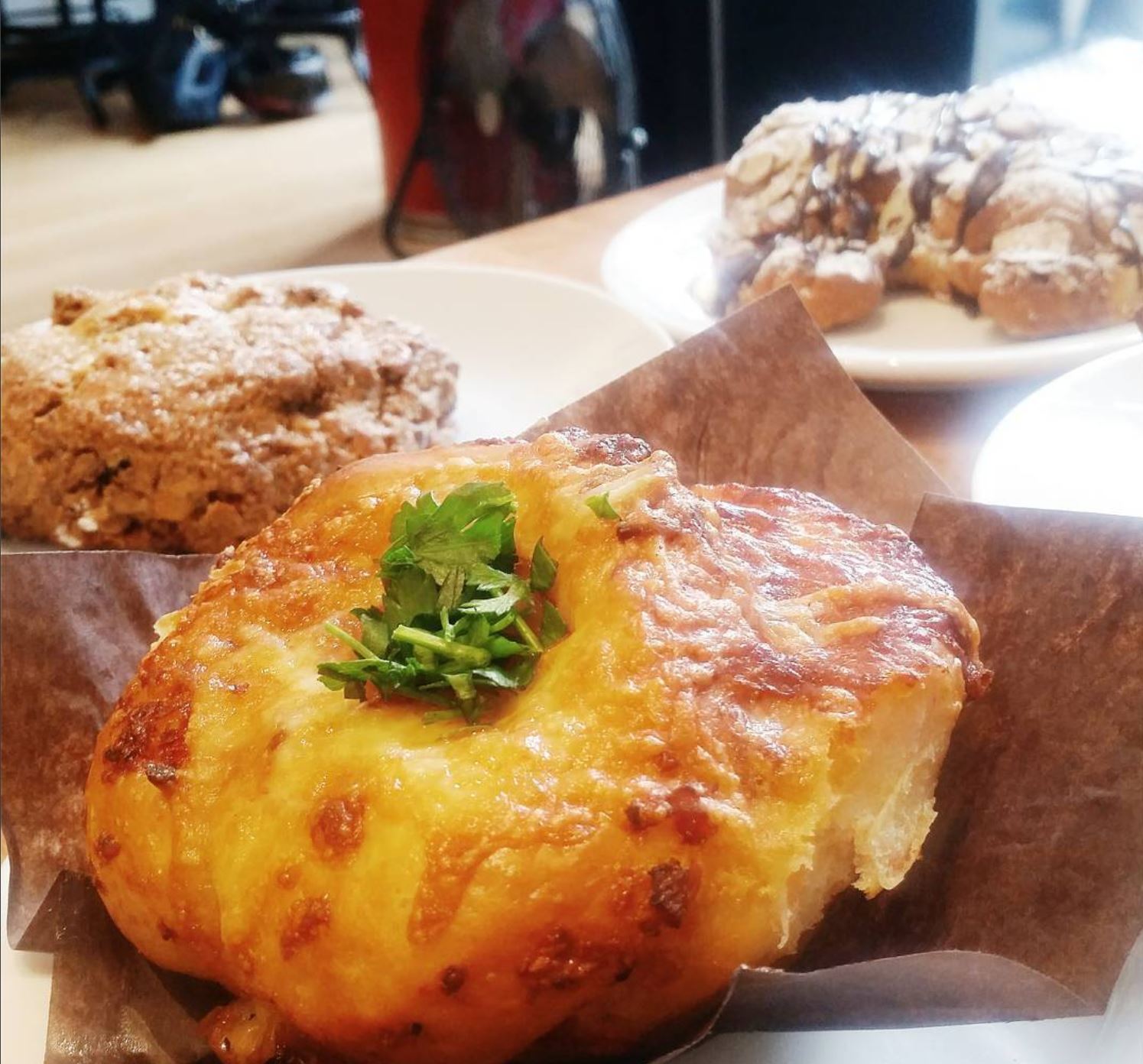 then moseyed on down to the seawall. 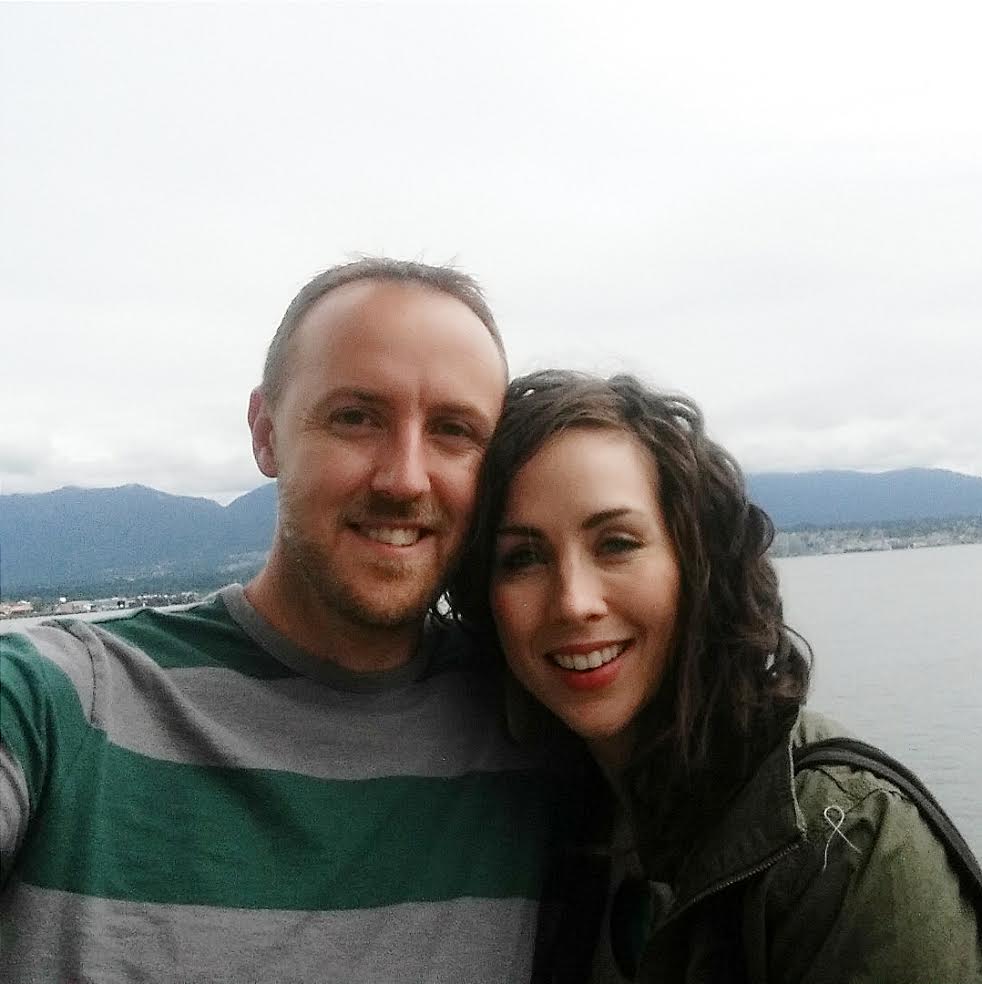 {Pardon our giant, fuzzy heads blocking out the view, but the morning mist hadn’t burned off yet, so there really wasn’t much to see}

We’d heard so many good things about Granville Island that we knew we wanted to visit, so we ambled back to the parking garage where…we discovered that our rental car had been broken into! 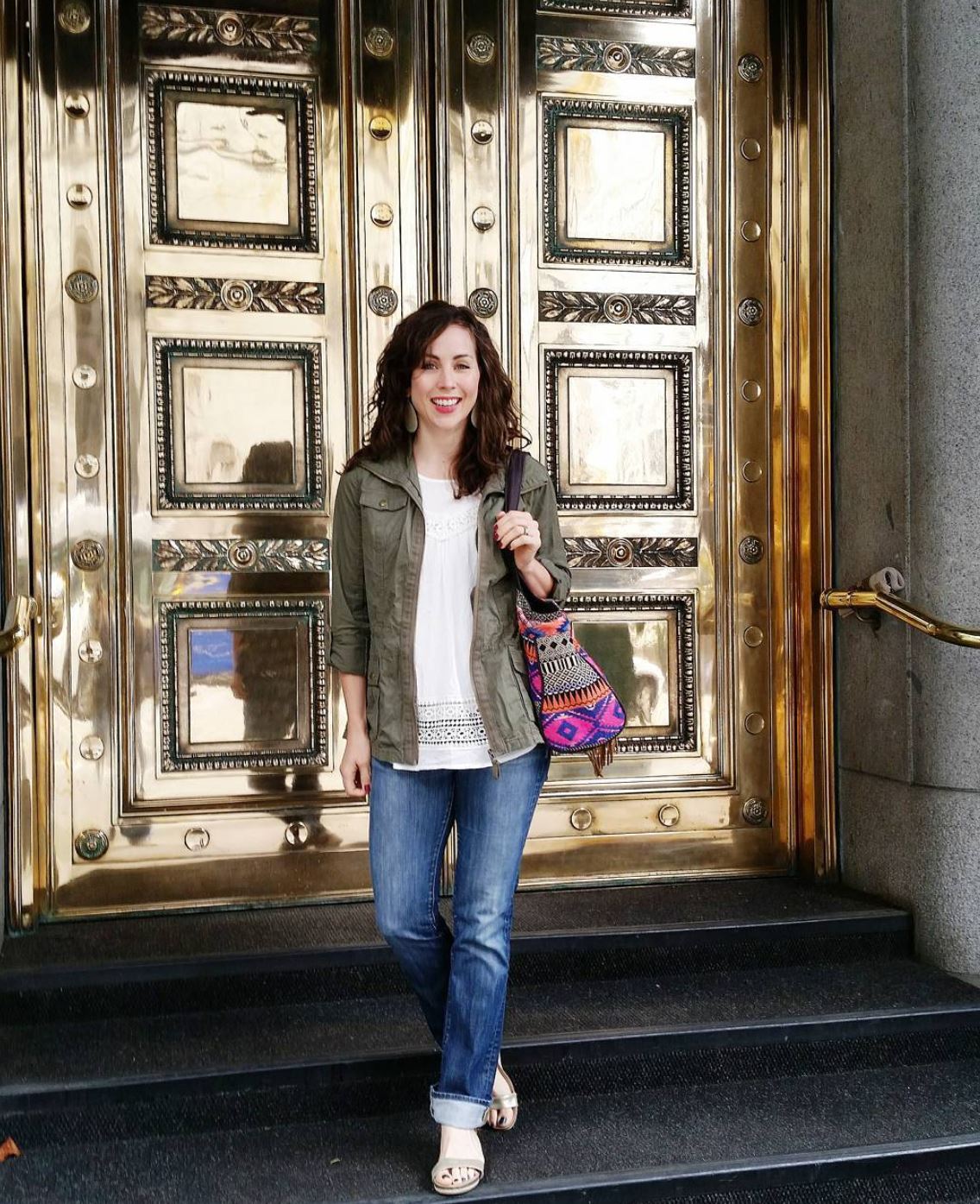 {Couple things: a) that gold door is so stinkin’ rad and b) I love the shirt I’m wearing in this pic, but I didn’t pay attention to wash instructions when I got home and unpacked, so…Della has a new shirt now. :/}

Thankfully, they didn’t even take the only thing we’d left in there (a package of Ritz crackers…apparently, these weren’t peckish thieves….although Shaun’s suggestion that they’d probably licked them all made the cracker I’d just put in my mouth taste a little funny).

We called the rental agency, and they told us we’d need to bring the car back at some point to exchange it and fill out an incident report, but we decided to keep it for the rest of the day (a decision that came back to bite us) since it was an hour round-trip to switch it out.

We spent the afternoon at Granville Island, meandering through the shops, buying 2 lb. bags of Rainier cherries (that I proceeded to eat pretty much single-handedly…over the course of 2 days), and fighting off the cheeky seagulls who attempted to snatch food directly from your hand the second your head was turned. 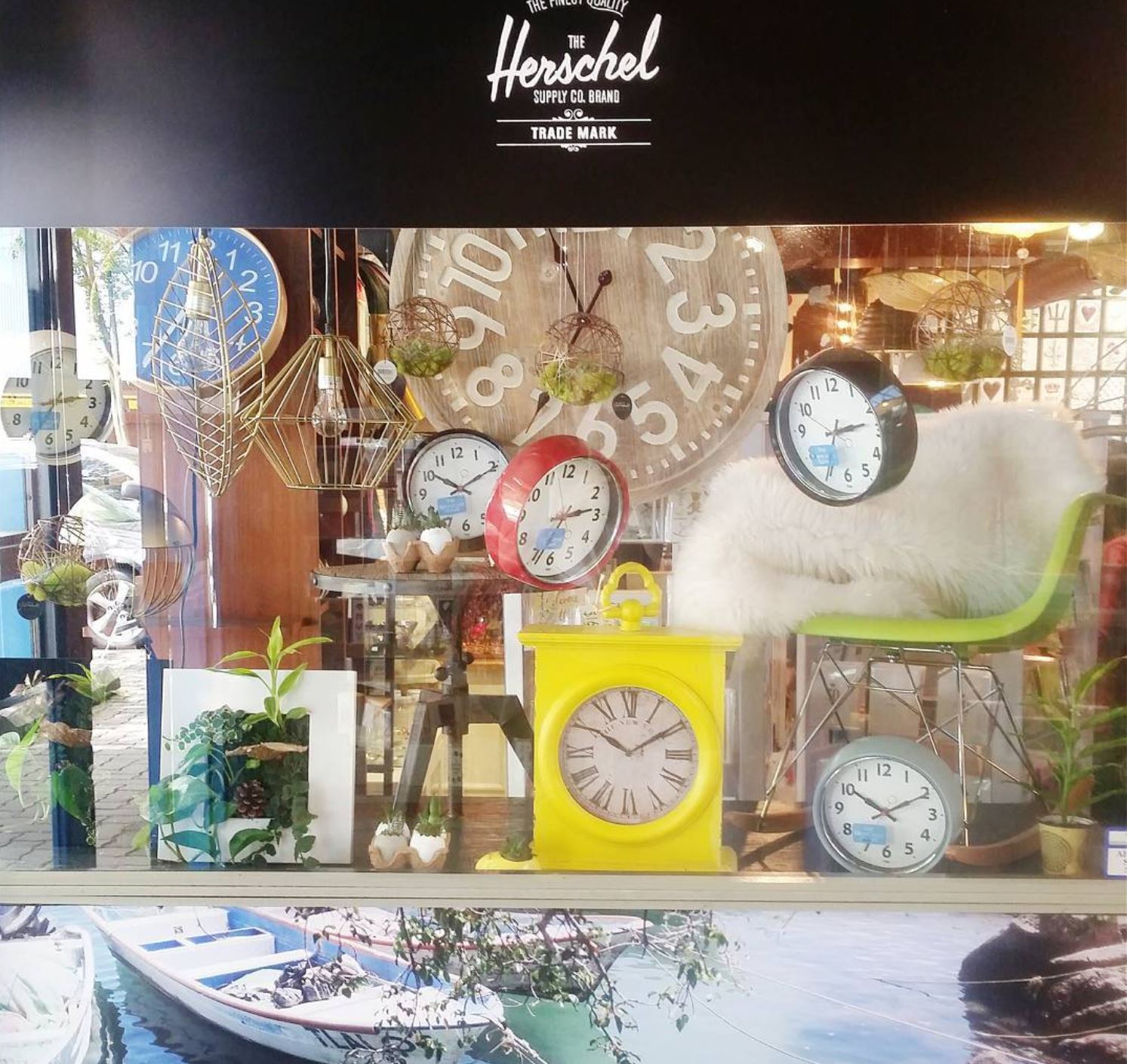 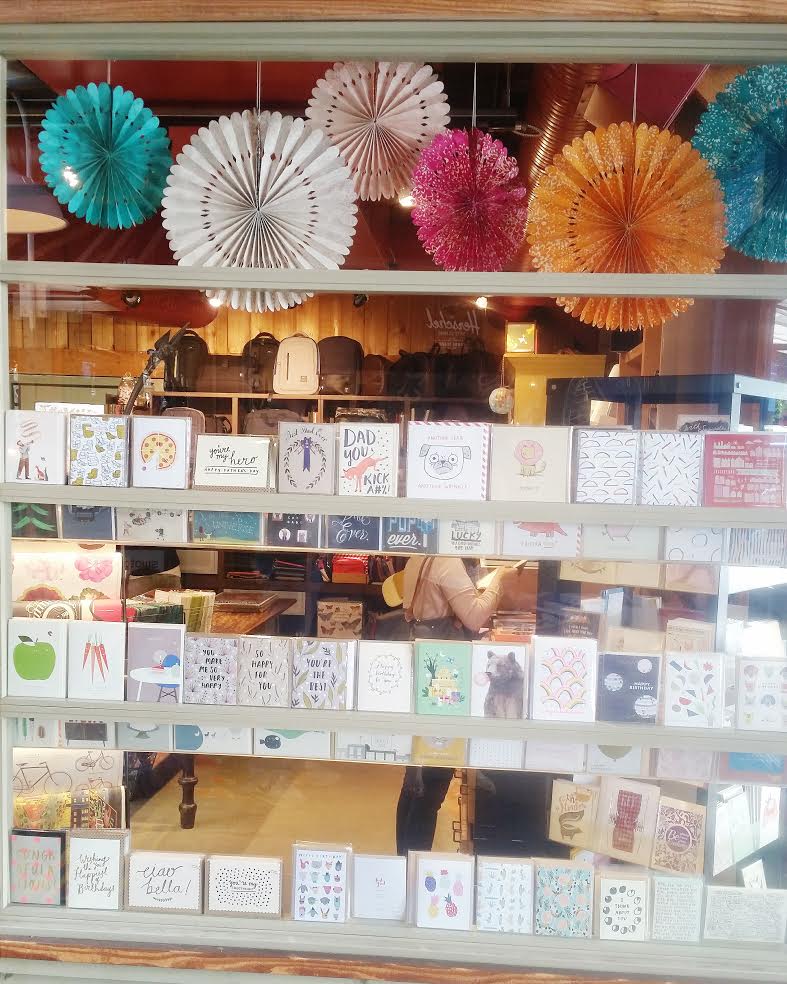 {So much window shopping cuteness!}

An IG friend had suggested a trip to The Cross Design and Decor, so we popped in for a quick look-see on the way back to our apartment.

And let me just say that if you’re in the market for overpriced gorgeousness, this is the place for you. Every new corner was filled with yet another impeccable display of stylish knick knacks, and–much in the same vein as Anthropologie–the sum of the whole made the individual pieces all that much more desirable. Every vignette was just so perfectly curated and arranged that I found myself thinking, “Oh! Yes. I need chairs like these,” until I actually lifted the tag and gulped so hard I almost swallowed my own tongue. $800 for one little rickety wooden chair? 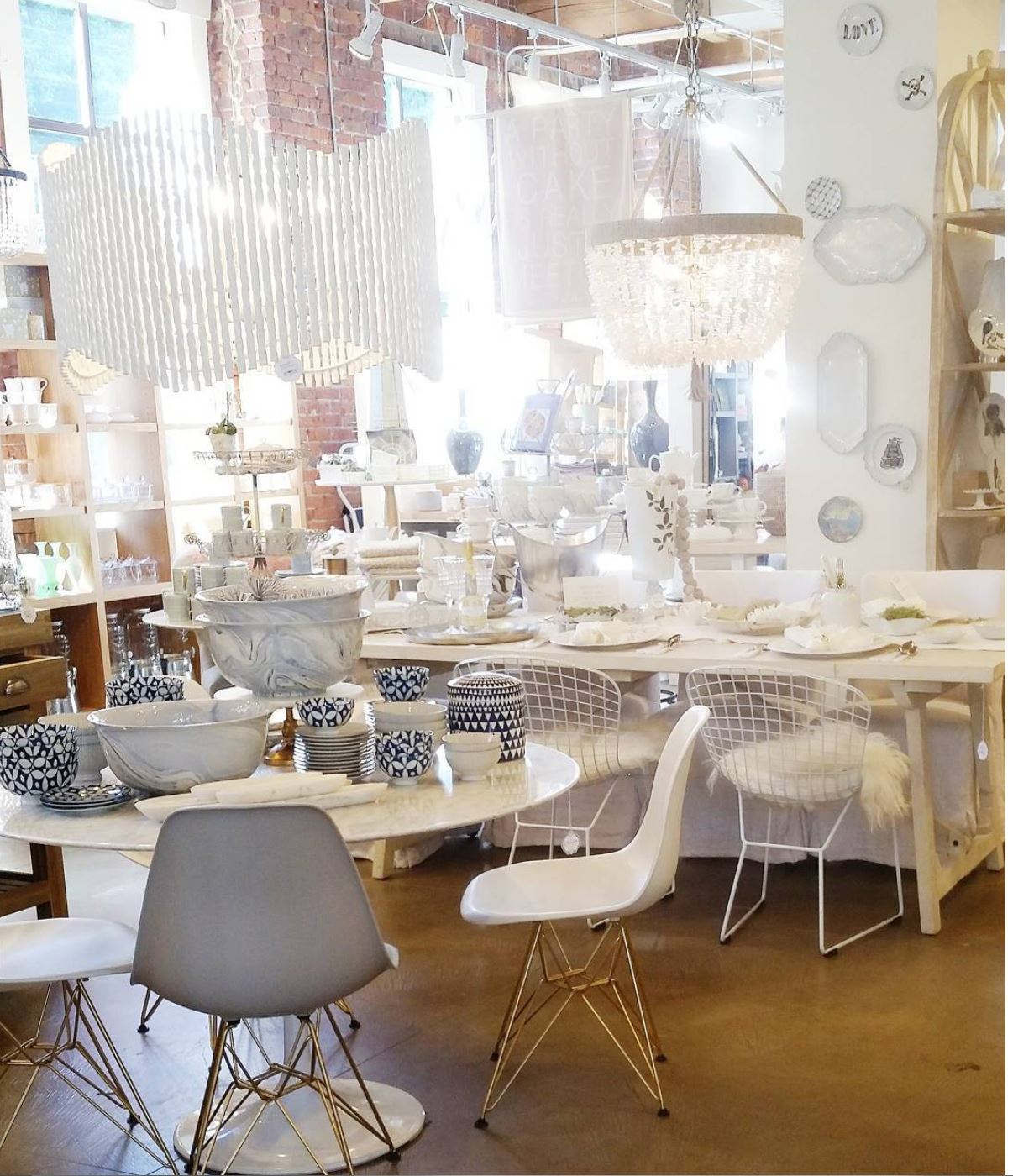 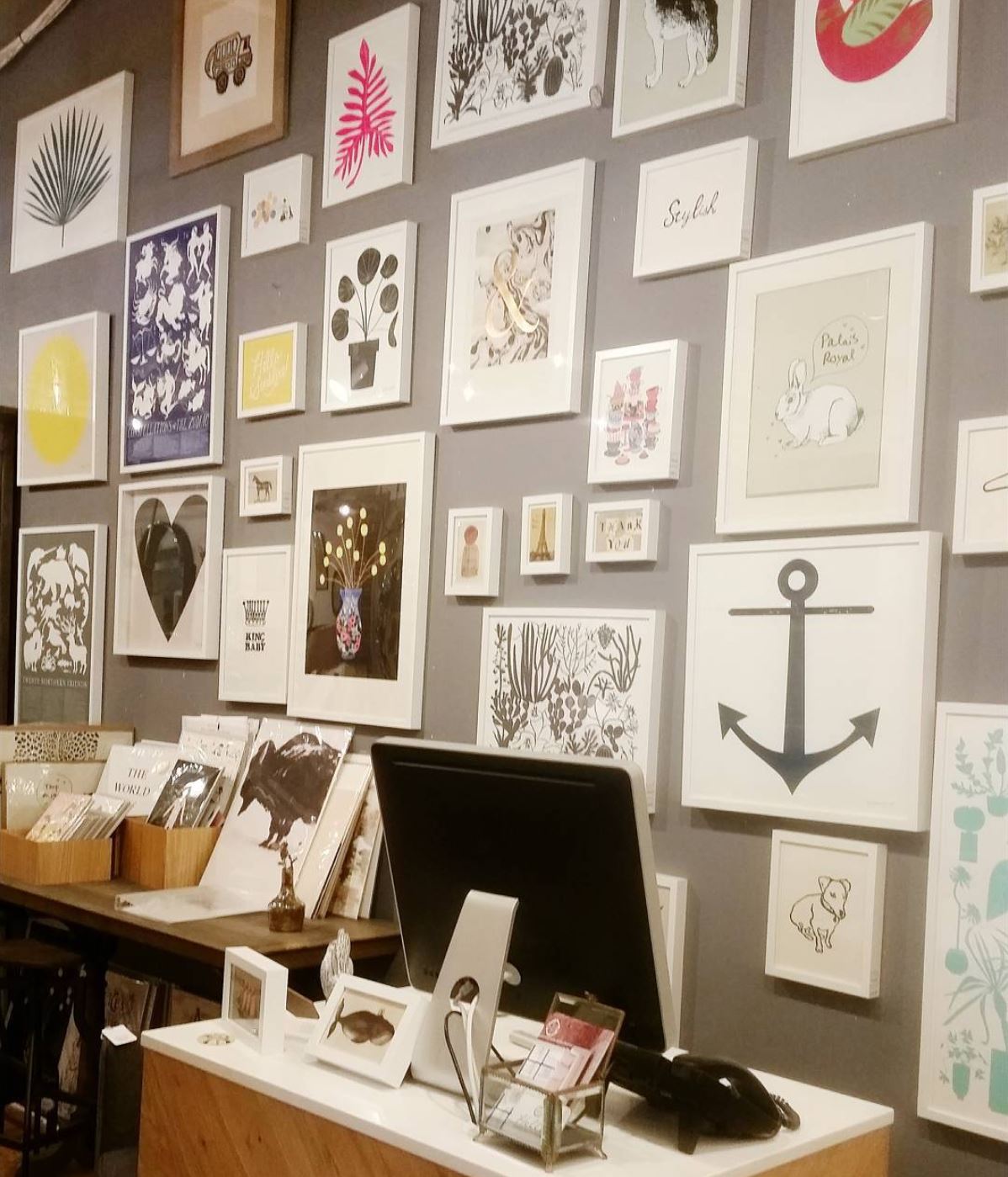 {Gray walls have never been my favorite, but, even though this pic doesn’t do it justice, this slate gray on this wall was such a sophisticated backdrop for all of the white frames that I found myself scheming walls in the new house that could use a coat of gray paint}

But it was still so fun to look–and to guess prices (we basically made up our own ritzy version of The Price is Right and took turns guessing, with the person who didn’t go over “winning”…nothing much).

Dinner was simple–a quick stop at a Fresh Bowl (kind of like an Asian Chipotle–yummy and, yes, fresh), and then we walked down to Bella’s Gelateria, which is this much-lauded little spot that’s won oodles of awards.

We waited in line for a good half hour (and, apparently, this was a slow night), but it was such a beautiful night that we didn’t mind a bit. Really, the weather could hardly have been more perfect if we ordered it up especially. 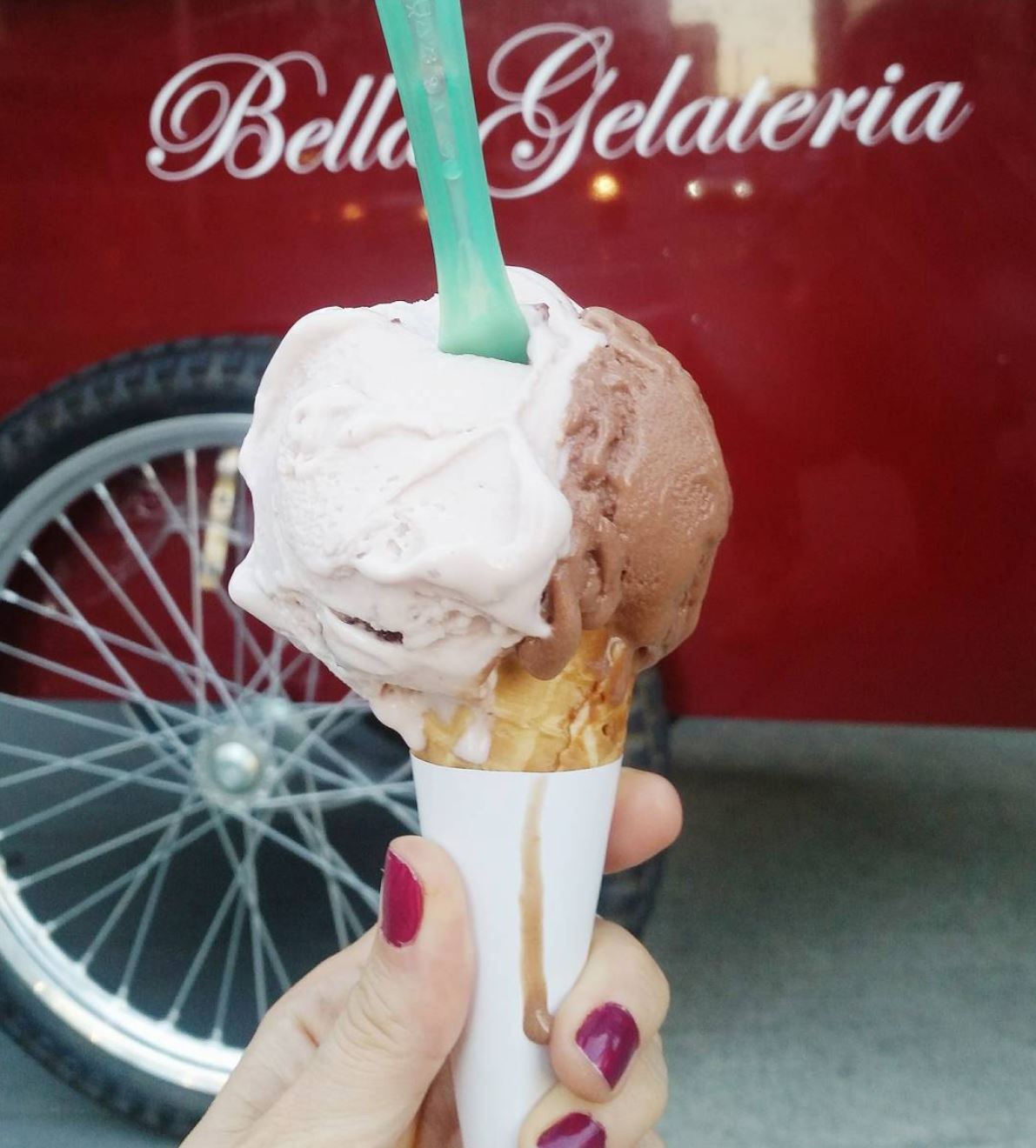 And the gelato was pretty delicious to boot.

We took another stroll along the seawall as we slurped our sweets (my only complaint is that mine melted lickety split, and I’d forgotten to grab napkins, so I ended up looking like a toddler who got into the chocolate sauce). 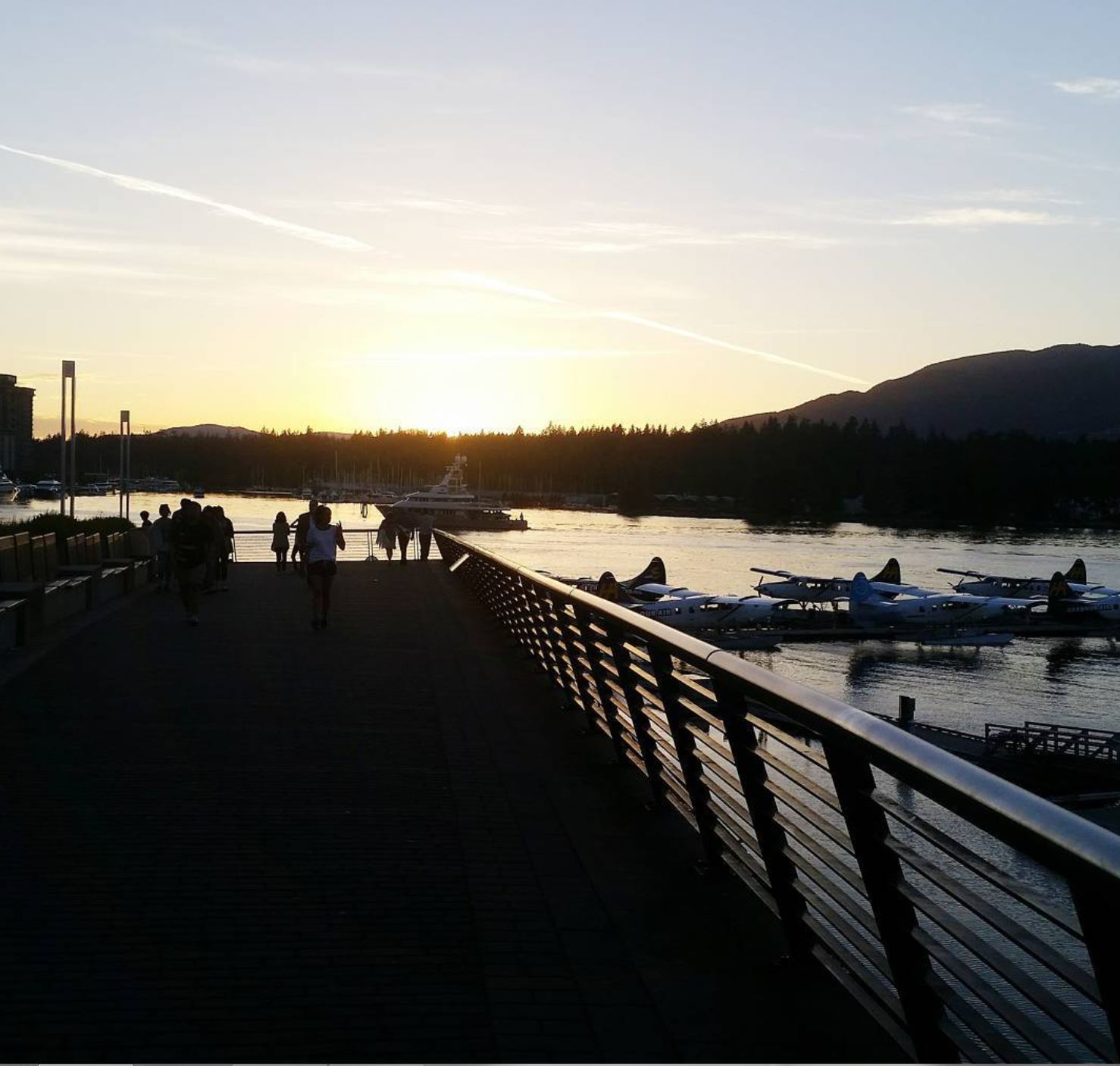 {It always fascinates me how the sun seems to take its time getting to the horizon, and then, suddenly !!!, it’s gone. There were literally 5 seconds between when I decided to snap a pic of the sun setting at the edge of the trees and when I actually got the shot, and I still almost completely missed it}

Once we (I) were clean, we decided we were still awake enough to watch a movie (we’d been drooping in our noodle bowls around 8:00 but got a second wind once we’d  blown right past our CST bedtime).

So, we headed over to the Odeon to watch Love and Friendship (a take on Jane Austen’s novella Lady Susan–it was entertaining and very clean!) and were, by a good 15 years, the youngest people (of about 20) in the audience. At one point in the movie, Shaun got a call, but the number just said, “Unlisted,” so he ignored it.

Turns out, that was a bad idea.

But you’ll have to wait until Part II to find out why.