Oh yeah! That pesky phone call right in the middle of the movie. (Read Part I if you’re lost as a goose).

Shaun checked his voicemail on the walk back to the rental, but try as he might, he couldn’t make out much more than that it was the Vancouver PD and that they had found our car with the smashed window (it was the little triangular window behind the full-sized rear window, in case you’re wondering) and were trying to notify us that it had been vandalized.

Of course, we already knew this. We also knew that we hadn’t lost one single penny or scrap of possessions.

So, when Shaun called back, fully expecting to be able to explain the situation, and was informed, instead, that the police had towed the car for “safekeeping” without permission or actual notification (methinks a missed phone call does not count), we were both a bit stunned.

Of course, the biggest bummer (at that point) was being car-less when we had been planning a day trip to Squamish the next morning, but the impound (hey! I got to visit all kinds of places I’d never been on this trip) was only a 30 minute walk away. So, the next morning, we strolled over to the Twisted Fork, ate an, ahem, hearty breakfast of banana stuffed french toast and Eggs Benedict, and then did our darndest to walk off at least a tiny fraction of those calories.

On the way, we were treated to some not-so-shabby views. 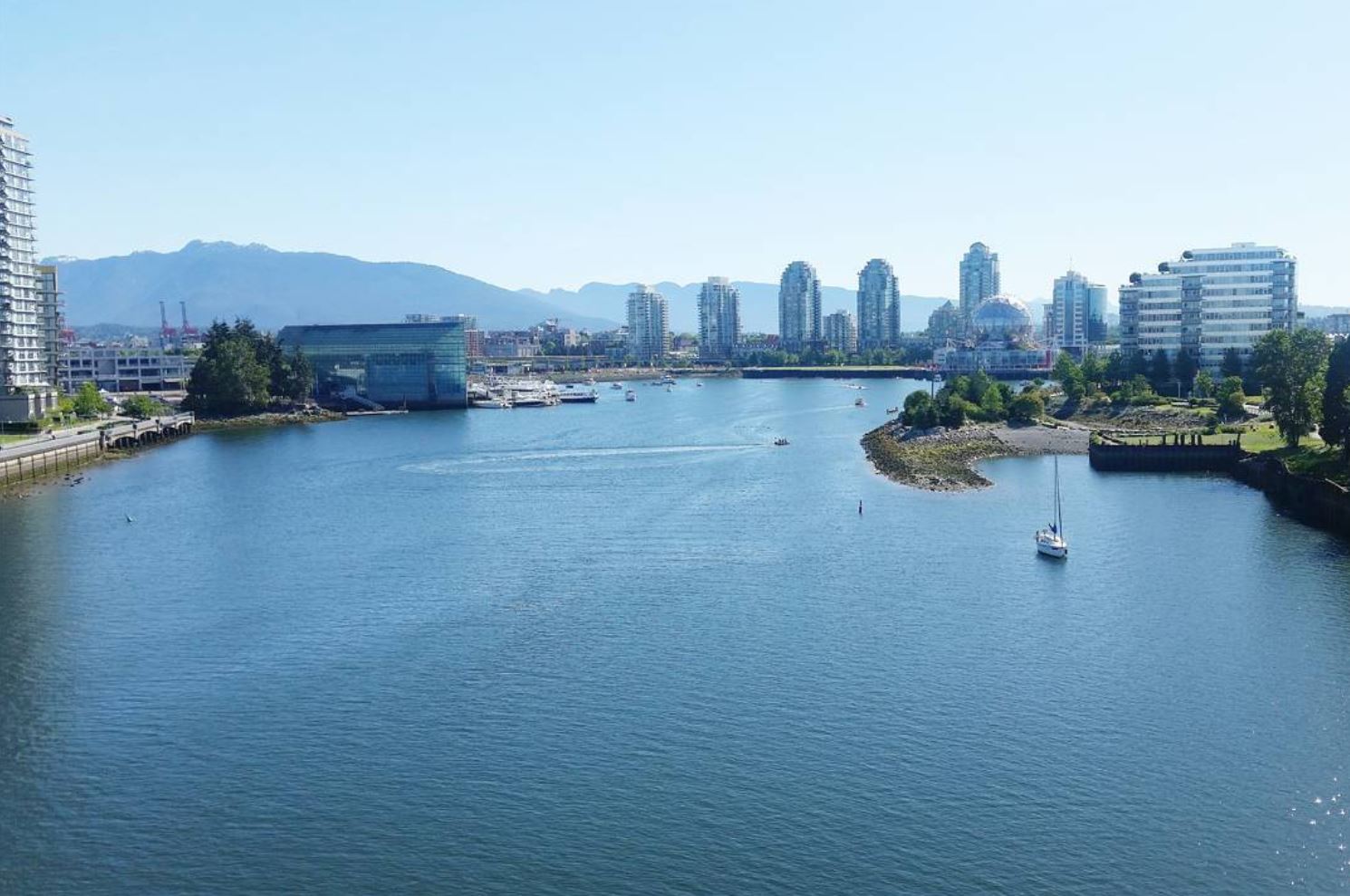 When we finally got there (somehow, we missed a turn and turned our stroll into a 45 minute hike), the niggling suspicion that the VPD was going to stick us with the bill for their little act of kindness came true…to the tune of $155. (So, basically, our car got broken into, and we lost nothing…until the police came along. Ha!).

I told him in the car that I was going to start washing random people’s doorsteps and then showing up a day later demanding payment, even though they didn’t ask and/or want me to wash their steps.

To add insult to injury, we had a parking ticket, even though I had proof that I’d paid the bill (we’ve since managed to clear up that little snafu, but at the time it felt like, “Oh, C’MON!!”).

Of course, although it never occurred to either one of us that getting towed was even a possible outcome, we sure weren’t keen for a repeat, so we drove the first rental car back to the airport, exchanged it for a zippy little VW Golf, and headed out for Squamish.

My brain could never quite immediately conjure the name, so I kept throwing out ridiculous versions like Squeamish, Sasquatch, and Saskatchewan, but the town itself was way cuter than its name (which, to be fair, originates from a Native Indian tribe and probably sounds much better in their language).

We got there while the Saturday market was in full swing and proceeded to eat all. the. things.

Basically, I’ve done vacation food two ways: 1) try to find a place with yummy salads and pace myself on all treats…mildly obsessing over/dreading the next meal (yup; that would pretty much describe my 20’s) and 2) gleefully research thee best food within a reasonable radius on Yelp and then eat what/whenever strikes our fancy.

I’ve learned that I much prefer the second, even if I do come home with some extra jiggle. Both because it frees up my mind up to actually enjoy the moment and because it makes Shaun happy when I don’t worry about it.

I point this out because I’m blushing a little remembering our farmer’s market indulgences, which included: a Greek Souvlaki wrap, an empanada,  a strawberry rhubarb hand pie, caramel kettle corn, and the best sno-cone I’ve ever had (most of them shared, I might add #justificationsrus). 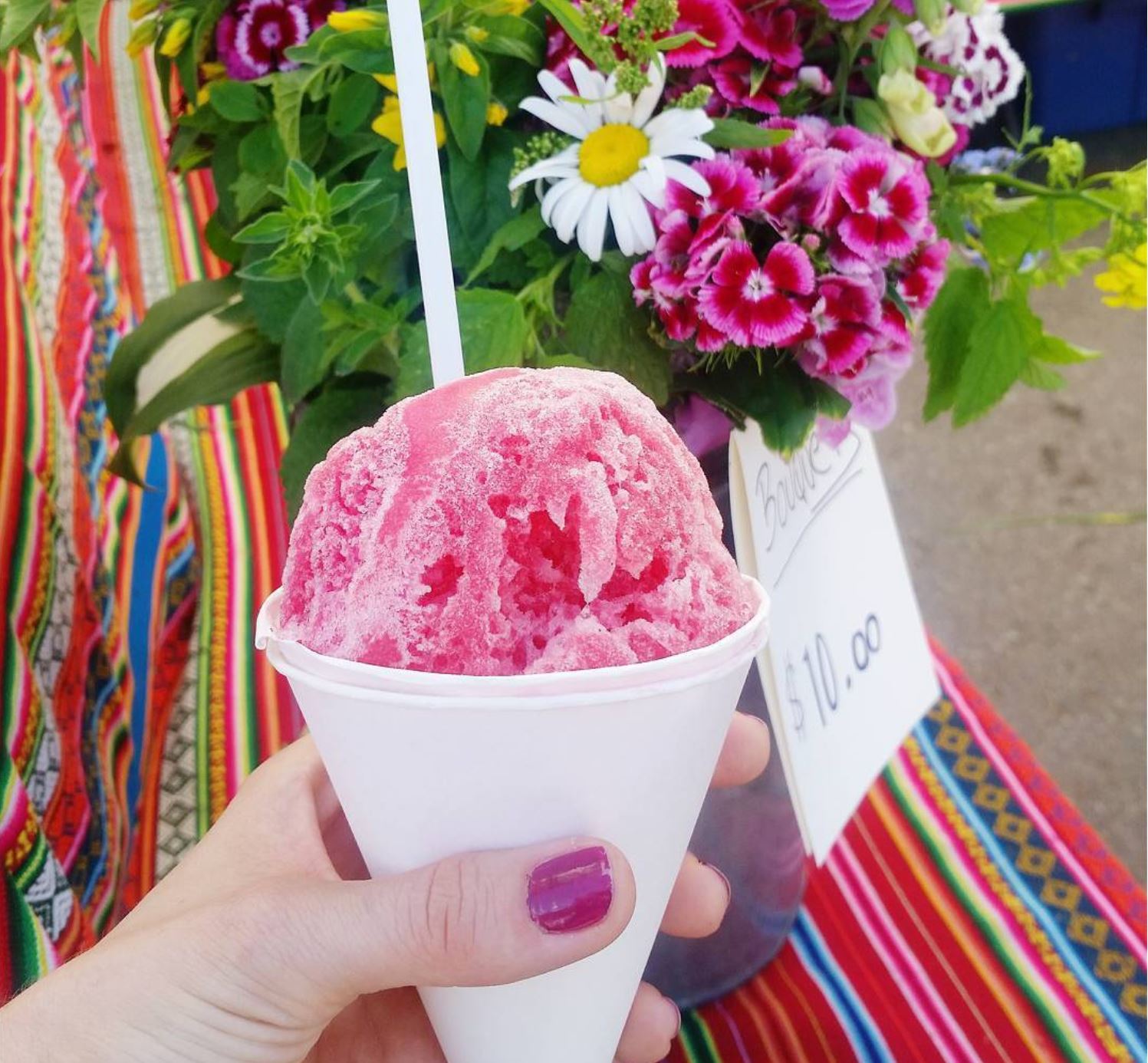 {Half raspberry vanilla, half hibiscus lemonade = aaaaaalll yum. Also, I really wanted to buy that gorgeous flower arrangement for only $10–$7 with the Canadian/US exchange rate, but it was our last day there, so it wouldn’t have made much sense}

After all of that, we couldn’t manage much more than a leisurely waddle around the picturesque square for the next half hour, but Shaun had told me about a challenging hike just outside of Squamish, and I said I was game. So, off we set, determined to beat the estimated 3 hour round trip time.

We started up the trail, unsure of when “the hard part” would start, but it didn’t take long to figure it out.

This is the hardest hike I’ve ever done…by a long shot. Now, granted, we didn’t take our time. We were determined to go as fast as possible, but after the first 10 minutes of climbing big rock after big rock and ascending stairs so steep you practically had to use the handrail to haul yourself up them, my pulse was hammering in my throat, and my breath was coming in jagged rasps. (And I thought I was in decent shape) 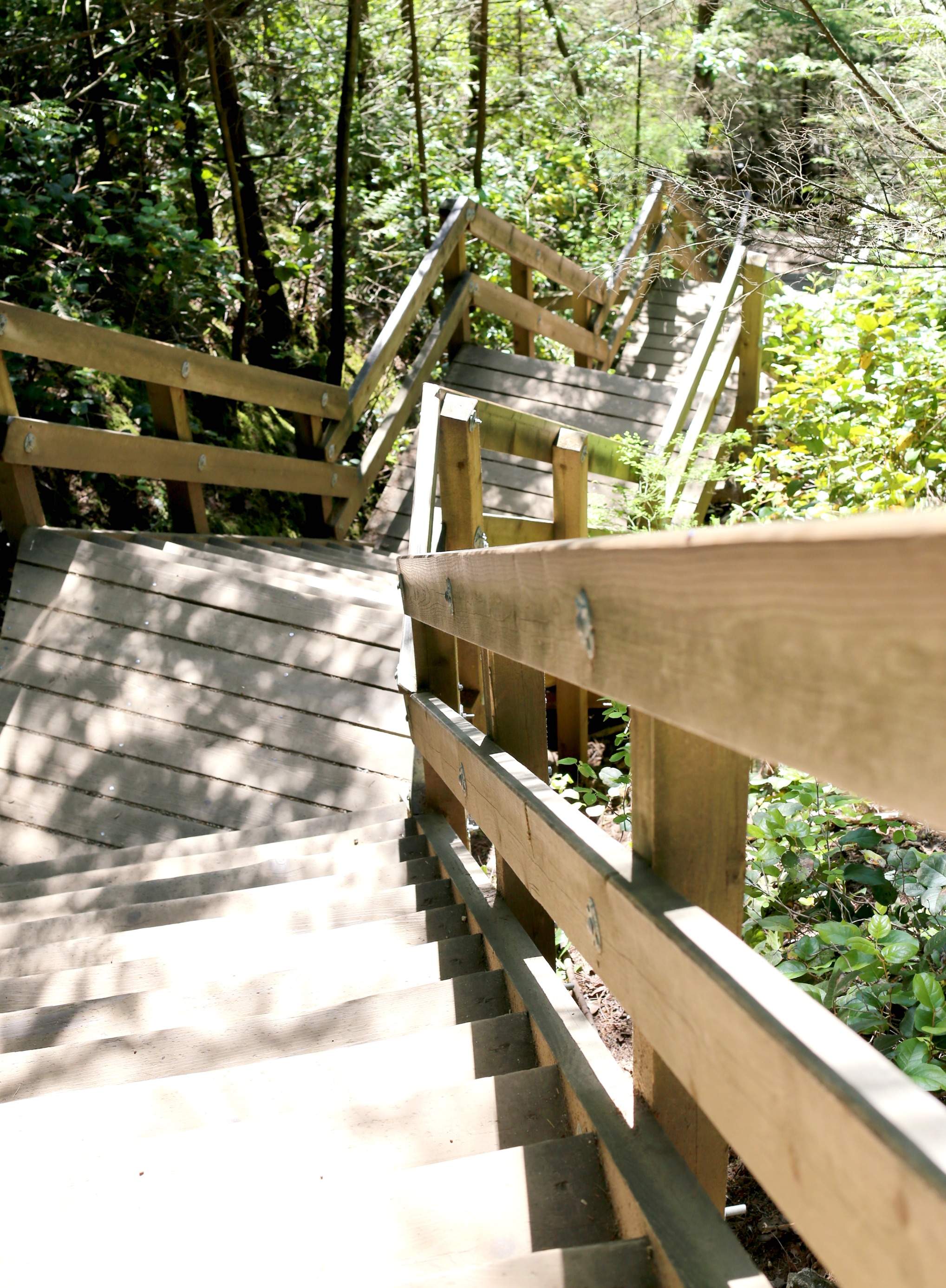 {I keep looking at this and thinking: “That doesn’t look nearly as steep as it felt.” This was only the first flight of stairs, by the way}

Fortunately, although the trail rarely let up (there were 3 or 4 spots that plateaued for maybe 20 feet before you were climbing steeply again), once my legs warmed up and my breathing achieved a rhythm, it felt doable. Still hard. But not quite as likely to kill us.

Of course, I think we were pretty much the only ones on the trail (that day, at least) really pushing ourselves, since we passed quite a few people we never saw at the start, taking their time picking from rock to rock and stopping at the outlooks. (Like normal folks; not knocking this approach).

I love exercise (y’all know that). And I love challenges. But I don’t love hiking. I’m a multitasker, but I don’t enjoy stomping through nature while trying to enjoy it. If I’m meant to be looking around and taking in the views, I’ll need to stroll, thankyouverymuch. But if I’m working hard, I’m focused on the next step, the next handhold, the next summit, and trying to get me to simultaneously enjoy that waterfall over there just makes me peevish. (Don’t I sound like a fun hiking date?)

Fortunately, this time, since our goal was speed, and the ascent was so stinkin’ vertical, I kind of got the best of both worlds. I was always looking up for the next rock, which helped me take in my surroundings, and I was always pushing myself to get to each one a little bit faster.

At the end of the hike, there was a section where you basically picked your way up the side of a vast boulder, in some cases using chains anchored to the rocks to haul yourself up when the footholds weren’t sufficient.

And then…we were there!

And the payoff was pretty spectacular. 360 degree views of God’s stunning creation. As soon as we reached the tippy-top, we flopped down on the warm rock, sipped water, and shaded our eyes from the dazzle of the sun off of the water.

It was a lovely reward for all of the gasping and sweating and burning muscles. 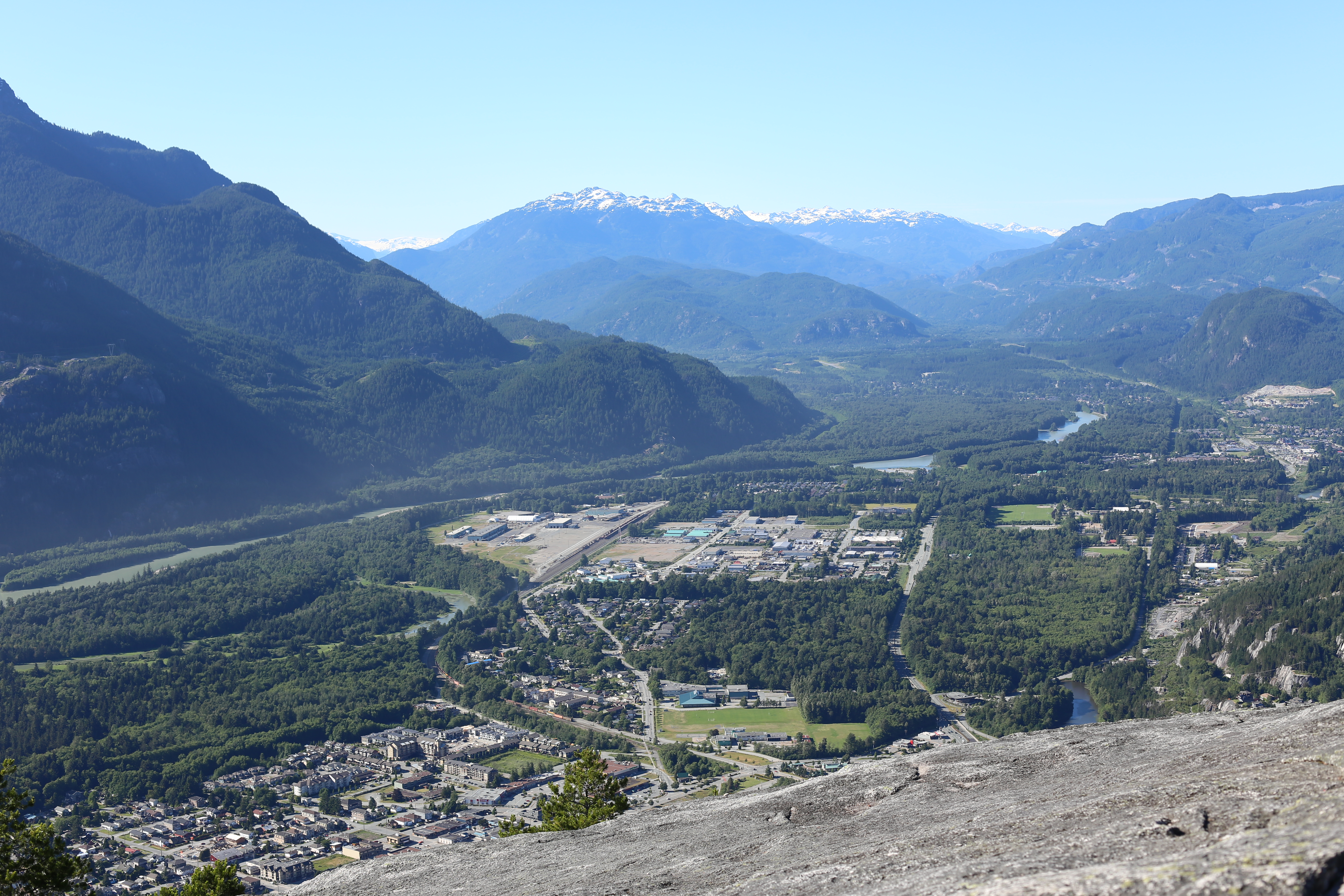 {Heeeellooooo, Squamish! Anybody else picturing that scene with Tom Hanks and his “aunt” and his “brother” from You’ve Got Mail?)

It’s a little hard to tell from the panoramic shot from above, but we were up high. I don’t honestly know if the next pic is going to give you any better of an idea, but… 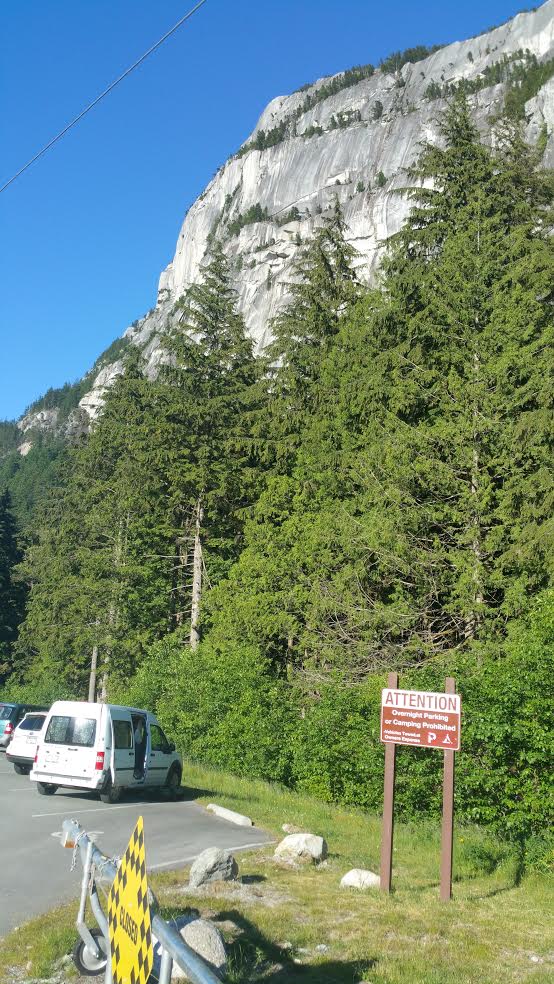 …we were on top of that giant boulder.

Of course, the wildest part is that we spotted at least one group of folks rappelling off of the sheer face of the boulder. Shudder. 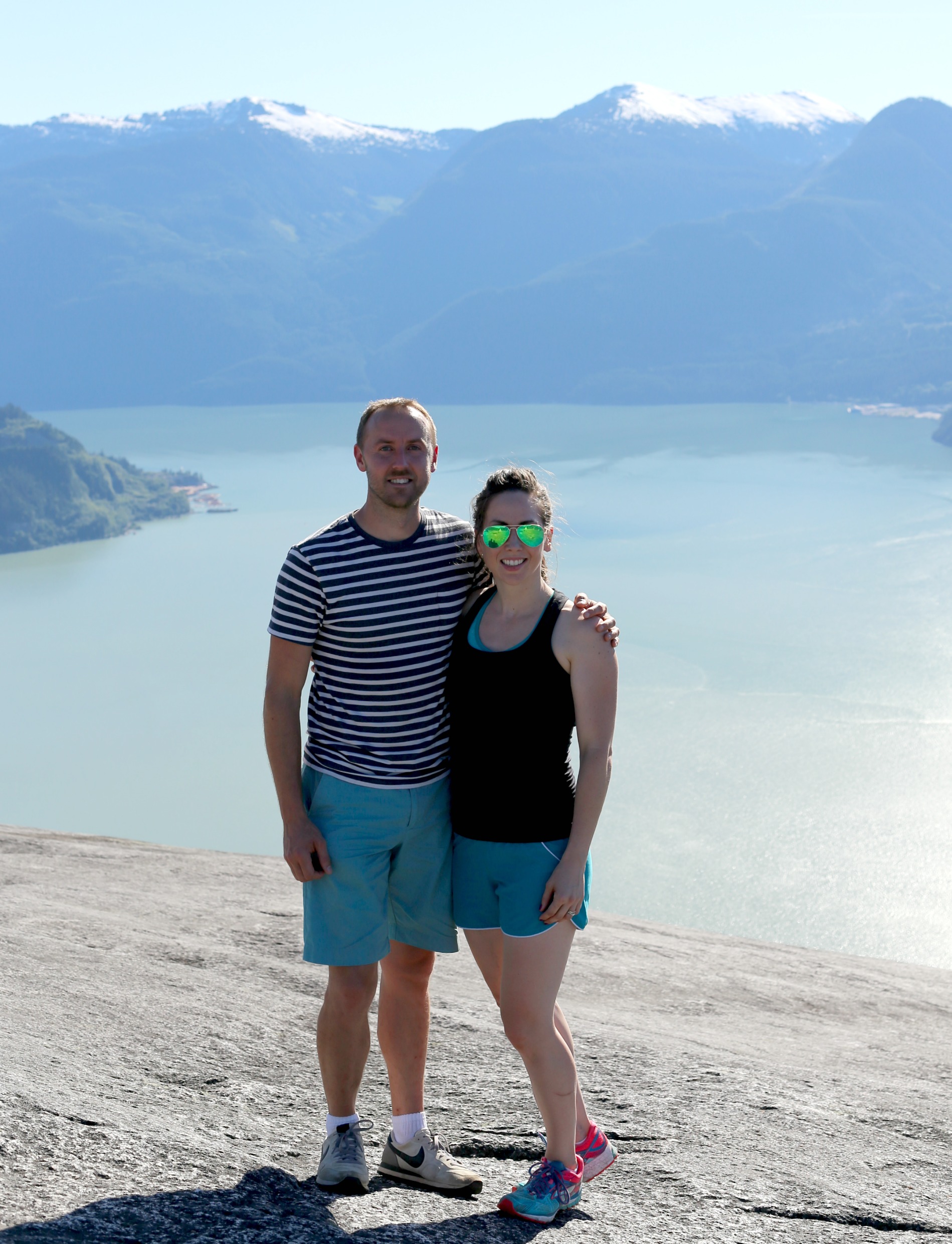 {I promise we didn’t coordinate our climbing outfits}

Half an hour later, we started the descent.

And, y’all, it felt like we went so fast. Again, on the way down, we passed up multiple people taking it slow, but I was concentrating too hard on landing on the next boulder down to notice much other than the constant: “Don’t fall” chant in my brain.

Ultimately, it took us approximately 46 minutes to climb it and 40ish minutes to get down (I was pretty slow on the first section of the descent where you had to hold onto the chains, since I was more interested in not dying than speed at that point).

Still, we were pretty happy with our 2 hour round trip (including the rest at the top), and–I’m not gonna lie–I felt considerably less like a slug after 2 days of eating with no exercising.

That night, we crowned our culinary “achievements” with a trip to a place with Brooklyn style thin crust pizza, and I couldn’t help but notice a couple at the table across from us who were engaged (I presume; she had a solitaire, but he had no ring) but rarely spoke to each other. I honestly felt a little sorry for her, since she seemed inclined to talk, but he spent most of the time staring at his phone. (Apparently, I’m a nosey Parker; probably, there was someone observing me, wondering what I was doing staring at another couple instead of talking to my husband. Ha!)

I only say this because–weirdness of all weirdness–the exact same couple were on my plane home, on the same aisle as I was. (And they STILL didn’t talk!)

I mean, Vancouver is a city of over 600,000 people, and the odds of my sitting beside a couple I’d happened to notice especially at one of literally thousands of restaurants the night before are pretty darn slim.

So…there you have it, friends: what we did, what we ate, what we saw.

I know I say this every year when we manage to get away, but I fully expect each trip to be our last. But our gracious parents (this time: his) are always so stinkin’ nice to keep our kids for several days, and–not gonna lie–as long as they keep saying yes, I’m going to keep tagging along on work trips!

The longer I’m married to my husband, the more I’m struck by how much I like him. Like just genuinely enjoy being in his presence–the way he makes me laugh, the way he can always, always make a crummy day better. I’ve always felt this way, but I don’t know that I expected my appreciation for him to keep increasing. It has/does each year, though, and I’m so grateful for a good God who saw fit to give me such a good husband and bless our marriage so richly with these opportunities to get away and just be us.