When you find out that you’re pregnant as early as I typically do, the whole process can seem to drag a bit.  A girl I follow on Instagram was surprised by her 5th pregnancy–to the tune of not knowing until she was fully 10 weeks pregnant. And I couldn’t help but feel a taaaaad envious. I mean: 10 whole weeks of not knowing you’re pregnant is practically the same thing as not BEING pregnant, or…something that like that. Of course, then she had her baby at 36 weeks (the baby was perfect…no complications), so she got to skip another month. And then, I really was jealous! 🙂

Ha! I kid (mostly), but I was actually pleasantly surprised to realize that, last Monday, I hit the 30 week mark with #babynumber7. I mean, that’s legit. We’re getting there! And I’m guessing that, with Thanksgiving, Shaun’s traveling, birthdays (Della’s, Simon’s, and Theo’s), and Christmas just around the corner, the time will fairly fly.

Until I hit Jan. 1, and this babe is still snug as a little love bug in his mama’s belly. Because my due date is technically January 2, but if you’ve been following along for any amount of time here, you know my babies like to be well-done before they make their appearance.

I am definitely mentally preparing for 1) lots of Braxton Hicks/false labor/mental torture for the last 6 weeks or so and 2) a January 15th delivery date. Maaaaaaybe, just maybe, then I won’t get as antsy as I have during the last two weeks of–well–most of my pregnancies.

ANYhoo, since I’ve made it to 30 weeks, I thought it might be time for another check-in. 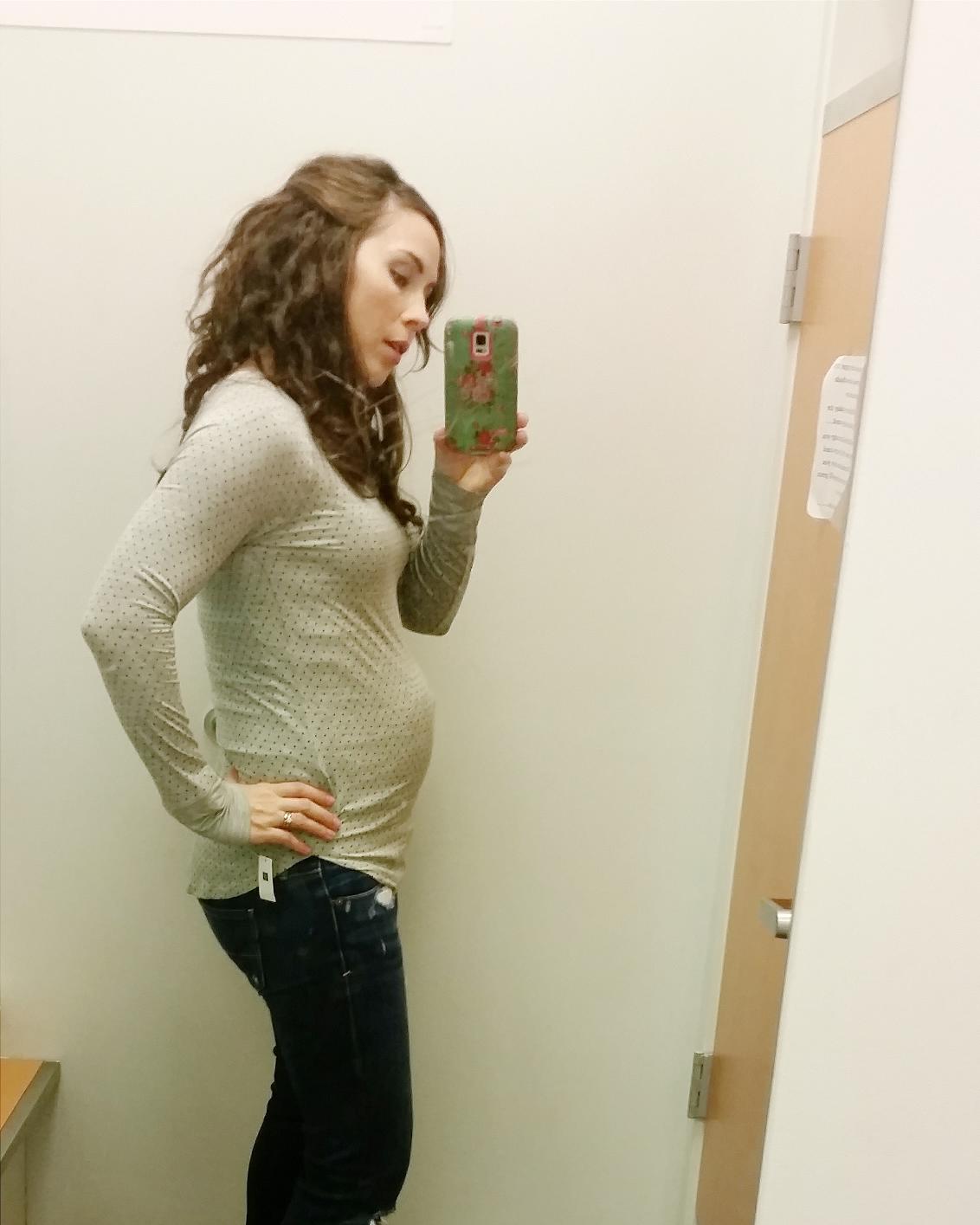 {I know this is not my usual “bump shot,” but I forgot to have Ezra take my pic on Monday, and we finally made it to Charleston–YIPEE!–so a GAP dressing room side-pic will have to suffice}

If my belly were a grocery basket, it would have this in it: I’ve never really done the whole, “My baby is the size of a _____________” comparison before, but apparently, Baby #7 is about the size of a coconut at the moment. Funny, since I’d have said pumpkin or watermelon with the way he’s already stretching up into my ribs. Oy.

If I could only eat one thing until he comes, it would be: nope. Still no significant food cravings. I still drink about 3 too many Dr. Pepper Icees per week (hangs in head in abject shame), but the rest of the time, I eat the exact same things that I always do (i.e. lots of fruit, veggies, carbs, and protein at home–with the occasional Thai food, pizza, or Chick-fil-a thrown in).

If I were an energy meter, my readings would be: alllll over the place. I’m finally over that epic cold I had, so I have more energy than I’ve had in weeks, but I feel like I flail wildly between CLEAN. ALL. THE. THINGS. and a constant mental chant of, “Nap, nap, nap, nap…” I would really love for the energy to stick for longer than 24 hours, but I’m happy that it exists at all, so no real complaints.

If I went into labor today, Baby #7 would have: no room at the inn. Ha! So, Theo is still in his crib and will remain so likely until we move because our babies usually sleep in a bassinet in our rooms for the first 2-3 months. BUT! Thanks to generous friends/hand-me-downs, I’m pretty well kitted it out with baby clothes. And everything else is still hanging around from the last–oh–six or so. So, I’m not too worried.

If I wanted to confuse you majorly, I would: show you this picture… 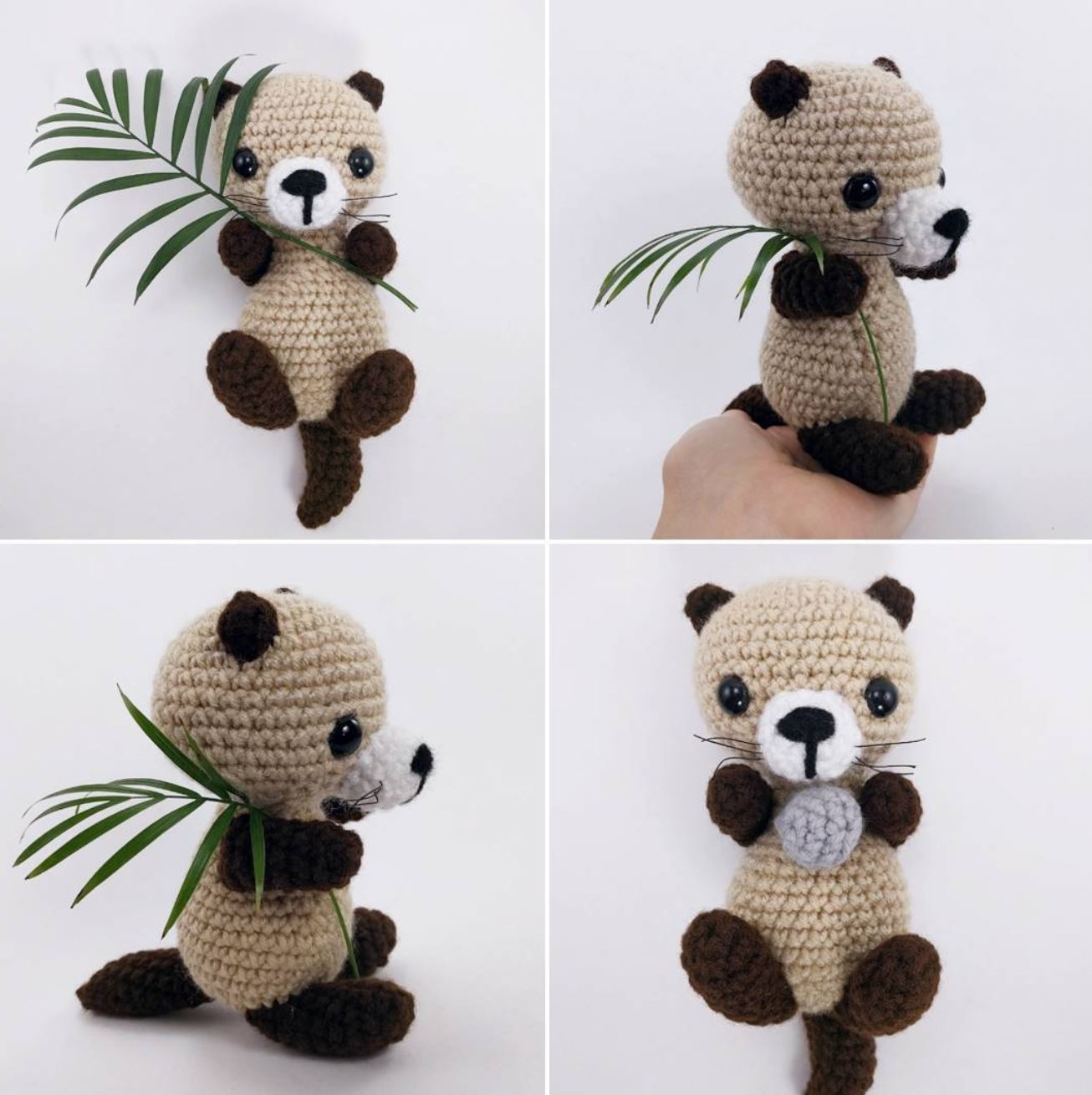 …and tell you that this adorable crocheted otter, which I had Theresa (go follow her on IG! She’s so stinkin’ talented!) make for me, is a clue to the baby’s name. 🙂 Can’t wait until I can tell you the whole story! (hashtag so mean)

If I had my exercise druthers, I’d: quit. ha! Not really. I know I’d go fitness stir-crazy in no time. But I’m not going to lie: I don’t feel bad when I exercise as a general rule (and I always feel better when I’m done), but I am SO over pushing myself as hard as I did with my last 3 pregnancies. I can remember being terrified of losing some of my strength if I went down on my weights in BODYPUMP when I was pregnant with Della. And now I’m over here happily cutting my squat weight in half and LOLing at my silly 27-year-old gung-ho self.

Perspective and age, yo. They are good, good things.

Also, I probably still have 60 classes to teach before he comes, so…I figure I’d better pace myself.

If I had to pick my favorite cute things the kids do/say about the new baby, they would be: the way Della kisses my belly every night and quietly/earnestly says, “Good night, ________. I love you.” She’s such a sweetheart these days. The fact that Theo has started saying his name, and it’s the just the most precious thing ever (don’t think he has a clue WHY he’s saying it, but he’s a very dutiful little parrot). Oh! And the fact that Nola still checks in every now and then with: “This is a girl baby, right? ‘Cause I really want a girl baby.”

If I had my best guess as to the baby’s future profession, it would be: an American David Beckham. This kid likes to KICK. And wiggle, shimmy, jostle, and jive. He’s a mover, y’all. BUT! My midwife’s assistant said that she thinks all of his limbs are facing outward, with his spine curved along mine, which would explain why I can feel everything so keenly.

If I had to name one thing I’m doing differently this time, it would be: myofascial stretches. My midwife, Melena, (also a nurse, by the way) has me doing these exercises to align and loosen my myofaschia (the “webbing” that covers all of our muscles/tendons) in hopes of shortening labor length (she’s seen good results so far) and just helping the process to go more smoothly all around. And I’m all for it! My muscles/tendons are really tight from all of the exercise I do, and my labors are long, so if there’s even a chance that a couple of easy stretches will help, I’m game.

If I could wear anything for the rest of the pregnancy, it would be: leggings and tunics. But I don’t wear them. I hardly own a pair of leggings, so I’m usually to be found in exercise clothes or stretchy jeans (some maternity, most just a size or two up from what I normally wear) and flowy tops. Next best thing.

Aaaaand, there you go! More info than you could have ever truly wanted to know about this pregnancy.

But when has that ever stopped me from sharing anyway? (Never).

Hope you have a lovely weekend, friends! I’ll be eating my way through Charleston for the next 2 days and then returning to real life until the baby comes (at which point it becomes real, real life).