I know (because some of you have emailed me as much, you sweet things) that anyone coming to my blog today is hoping for any news except that… 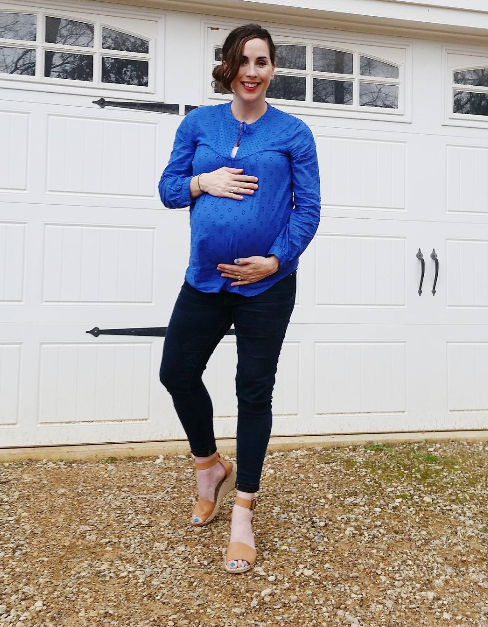 {Here I am in all of my royal blue, big-bellied, 41 week & 5 days glory. Looking very large and in charge and awkwardly posed thanks to photo credit going to sweet Della}

But–le sigh–it is the whole truth and nothing but the truth. (Please help me, God).

I think that I have now officially been pregnant for the longest amount of time in my considerable reproductive history.

Theo came 11 days late, but we passed up that mark yesterday.

Simon and Della were both 14 days late on the dot. BUT! The dates in my head (that I was pretty sure of) were different (later) than the sonograms, and so I think they were probably both “only” 9 days “late.” (Clearly, they both came in God’s timing, and both were perfectly healthy–if 3 pounds different in weight!!).

#babynumber7’s dates are spot on–in my head and on the sonogram (like to the day), which means that I am now 12 days overdue and counting…

How do I feel about this?

As long as I don’t think too much about the fact that I may have to evict a 10 pound baby from my body with nothing more than willpower and zero abs, I feel fine. Definitely relying on the Lord for grace when the time does come.

So, mentally, I’m as good as a hugely pregnant lady is gonna be.

And physically, I’m good too. Not even that uncomfortable. Most of the time.

I finally gave up my fitness classes this week, but it was less to do with a physical inability to teach them and more about a weariness with being asked, “Is he STILL in there???!” every time I waddled in the door.

That said, after all of that talk I’ve done in the past few weeks about how grateful I am not to have had very many “warm-up” rounds to mess with my brain, I have been contracting at regular intervals ALL. WEEK. LONG. (which was definitely a contributing factor to deciding to get subs for my classes…contracting in the middle of a jump kick is no fun)…starting Monday afternoon and then continuing with intermittent fits and starts until, well, riiiiiiiight now (yup, just got a good squeeze).

There have been two nights that I thought, “Hmmm…if these stick, we’ll have a baby in–oh–20 hours.” (Insert eye roll at my suuuuh-low body). But most of the time, I’m just ignoring them completely.

There have been other signs of labor whose gory details I’ll spare you, but suffice it to say that, one morning, when one of them occurred, I was all: “WOOHOOO! I’m going into labor soon!!”

And then, I remembered that I was 41 weeks 3 days pregnant, so of course I’m going into labor soon (one way or another), and I felt distinctly like Cuzco in The Emperor’s New Groove when he throws his hooves in the air and hollers: “YAY! I’m a llama again…oh…wait.” #underwhelming

P.S. If you’ve never seen The Emperor’s New Groove, you must, at least once, for the character of Kronk alone (I mean, he does his own theme music).

ANYhoo, as much as it feels a bit like I’ve got my bags all packed for vacation (exciting) but don’t know when I get to leave (deflating), I’ve finally learned how to enjoy being overdue.

Ready for my I’m-over-a-week-overdue-and-I-don’t-even-care motto?

This is hardly my normal mantra, but when I’m about to have a baby, I have learned to say yes to pretty much any opportunity to do something a little different and fun–with my family, with friends, by myself…whatever.

So, the last two weeks have been full of much-needed house-cleaning and organizing, as many get-togethers with friends and family as possible, and at least 2 dates with my husband. To say that it’s been a productive and enjoyable first half of January would actually be an accurate statement–despite that I’m down to two pairs of pants that fit and have such bad round ligament pain that turning over in bed is literally a 10-point process (bend, flex, shift, roll, repeat). 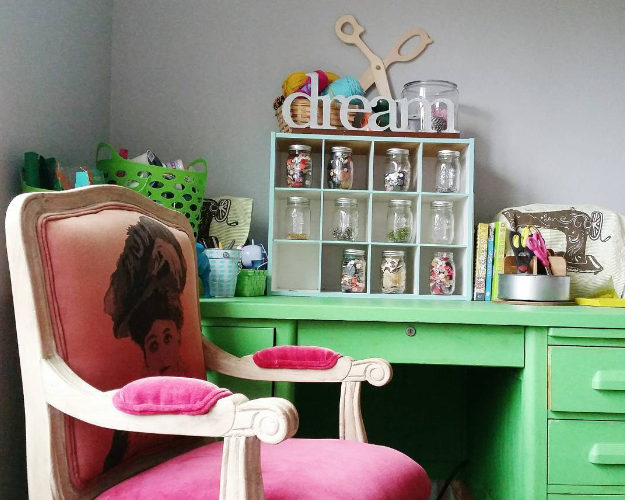 {My amazing, servant-hearted sister-in-law came to my house 3 different days this week and cleaned my messy craft room–among other things. She’s theeeee best!}

With Simon and Della (my technically 2-week-late babies), I spent a good 3 weeks throwing myself one pity party after another that I wasn’t having a baby by the end of the day. Sure, I accomplished things–both practical and fun–but begrudgingly. As in: I’d rather be having a baby right now than on a rare date with my husband. Hmph.

No more, though. If Shaun and are I at the movies (something that usually happens once every 4 months at most), I’m thinking, “Don’t you dare come out before I see the end credits, baby boy!” If the girls and Theo and I are out junking and having a lunch date (as we were this afternoon–hence actually bothering to get dressed in that blue outfit above), then that’s what I want to be doing. 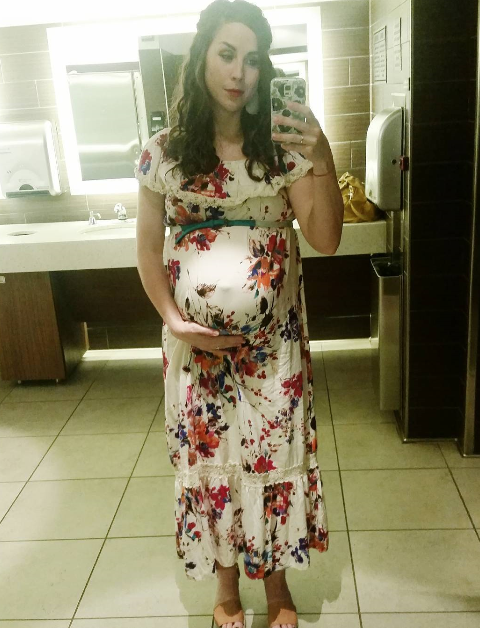 {The weather here has been nuts; a week ago, it was 15 degrees. The other night, when Shaun and I went on a date to see Hidden Figures, it was so warm, that I wore this open-toed sandals + summer dress ditty and was practically sweating…and not just because I’m currently baking a human}

Being grateful for and engaged in the moment has drastically changed my mindset about being “overdue.” I don’t love the ever-expanding belly and uncertainty. But neither do I despise them. It just is what it is. And what it is is an incentive to be more intentional with my time–which will soon be sucked up (quite literally) by a precious little (hopefully) bundle of needy, newborn joy. 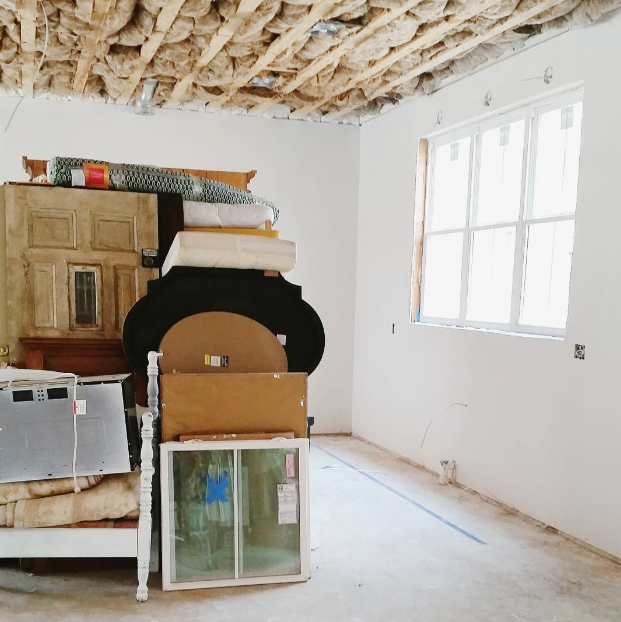 {We’ve made a ton of house progress lately too…sheetrock + wall texture are done-zo. We’re moving on to permanent power, A/C, cabinetry, trim, floors, doors, and such next. It’s pretty exciting stuff! So exciting, apparently, that ,even when Hannah–sister-in-law–and I loaded the van with tons of furniture and boxes to take over to the new house, it still didn’t send me into labor}

By the way, for those of you who are worried about my chillness because you’re sure this baby can’t possibly be safe in this-here-reluctant womb of mine, let me assure you that my midwife keeps a very close monitor on all things baby–especially during these last few weeks. I’ve had weekly appointments for over a month during which she checks all the things (except dilation, unless I ask, because–quite honestly–that means nothing).

And if this little guy isn’t here by Tuesday, I have a sono scheduled to do a complete bio-physical assessment and make sure that my amniotic fluid levels and placenta are good (I had to get those with Simon and Della too and was either in laborat the time or started it shortly thereafter). Other than that? The baby comes when he’s ready, and I am okay with that.

The Lord has just been so good to guard my heart and mind with his peace that passes all understanding in pretty much every area this pregnancy, but the one thing that does still make me nervous if I dwell on it is the labor itself. Every time I picture transition or pushing, I start to sweat. You would think that by your sixth labor, you wouldn’t dread it so, but I have been. At least until the last few days. By this point, though, I’m pretty much good with anytime he’s ready–even though I know it will hurt like the Dickens.

So, who knows? Maybe I’m the one who has been subconsciously holding us up. Whooooo knows…

As always I appreciate all of your assurances of prayer and kind words. It’s actually kind of amazing to know that I’m being upheld before the Lord by–not only my own family and friends–but a sisterhood of women around the world whom I’ve never met.

Y’all are the best!

And don’t worry. I will post as soon (within reason) as there is a baby. I’d want to know too.