Because how could I not use that title at least once?

So, I have a feeling that at least 2 of you are wondering what life with 7 kids is like. And let it never be said that I mind writing for a small audience because I’m going to deliver the goods for all 2 of you right here, right now.

In other words: busy, but good.

Edit: I started writing this a week ago. So. Yeah. Very Busy.

HA. There is not one single person out there who has read more than one post of mine who believes for even a nanosecond that I did or even could write a 100 word blog post. (Because that sentence, alone, had 35 words).

But seriously. Adding a baby to our daily life has been a remarkably smooth process, due to several factors.

1. My mom kept all 6 of the other kids for 5 days after Honor was born, which, yes, I realize, pretty well qualifies her for sainthood and makes me spoiled rotten (guilty). She even brought homemade dinner with the kids to meet Honor the day he was born then took them all back home again. And let me just say that–when you’ve had 6 kids already–5 kid-free days to rest, recover, and bond with your baby is completely unexpected…and all the more amazing for it (although, there were several evenings I almost made Shaun go get the other kids because I was missing them something fierce, and the house was entirely too quiet).

2. Once we were all back together, the crazy levels never got out of hand. The older kids, including Theo, have all been super-chill–while still extremely excited–about Honor’s arrival. (I wouldn’t say that Theo has been “super-chill” in general because, well, he’s two, and the emotions, they are strong. But he loves his baby brother).

Ezra–true to his “helper” name–would gladly hold Honor all day long, which is a huge–yes–help when I need to flip the laundry or even take a shower. Shaun has been around a fair bit, which doesn’t hurt, but the kids and I are managing pretty well on our own too. 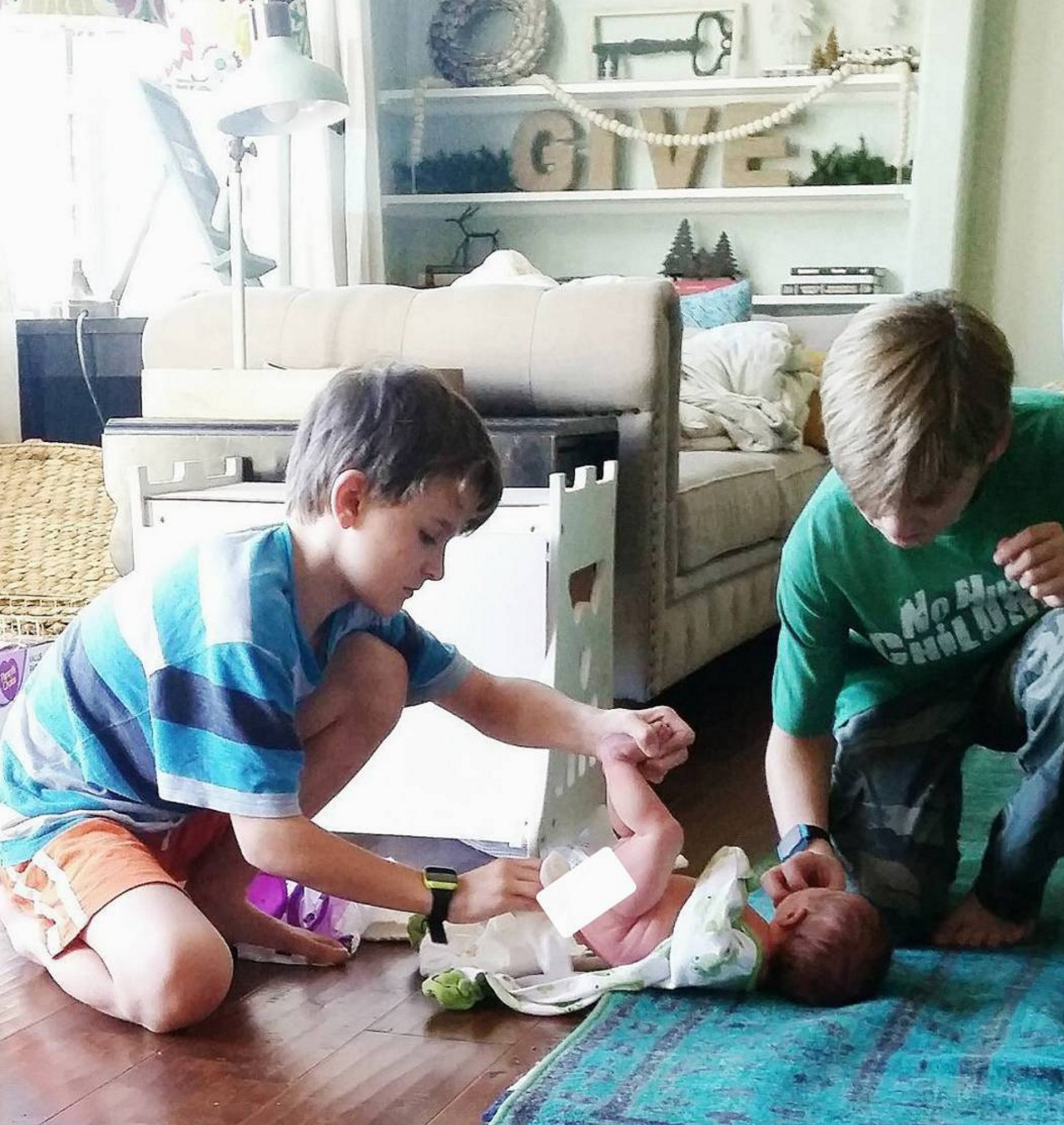 {I need to give Simon his “helpful brother” due too. This is the scene I turned around to one day from the kitchen. Gosh, those boys are sweet; also, don’t you love my clumsy baby nudity censorship?}

3. We’ve gotten back into our routine as quickly as possible. We started back to homeschooling the week after the baby came, and we even made it to our homeschool co-op last Monday and today. (Honor just hangs out with me and naps in his car seat or the crook of my arm while I grade papers…or he gets held by a succession of eager-to-help fellow homeschool mamas).

I probably would have waited longer to jump back into thick of things if we hadn’t just had Christmas break, but we all needed some schedule in our lives, and it has helped to stave off the baby blues (which I tend to get if I have too much time to think).

I even managed my first solo flight a week and 1/2 ago with seven kids (to the grocery store, mostly) and only rolled my eyes halfway back in my head at my own ding-battedness after Honor COMPLETELY peed through his outfit, and I fished around in my bag to discover wipes and a change of clothes but not one single newborn diaper. Of course, when I decided I would just have to diaper him up to his eyeballs in one of Theo’s size 4’s, I discovered I was out of those too. #meforpresident 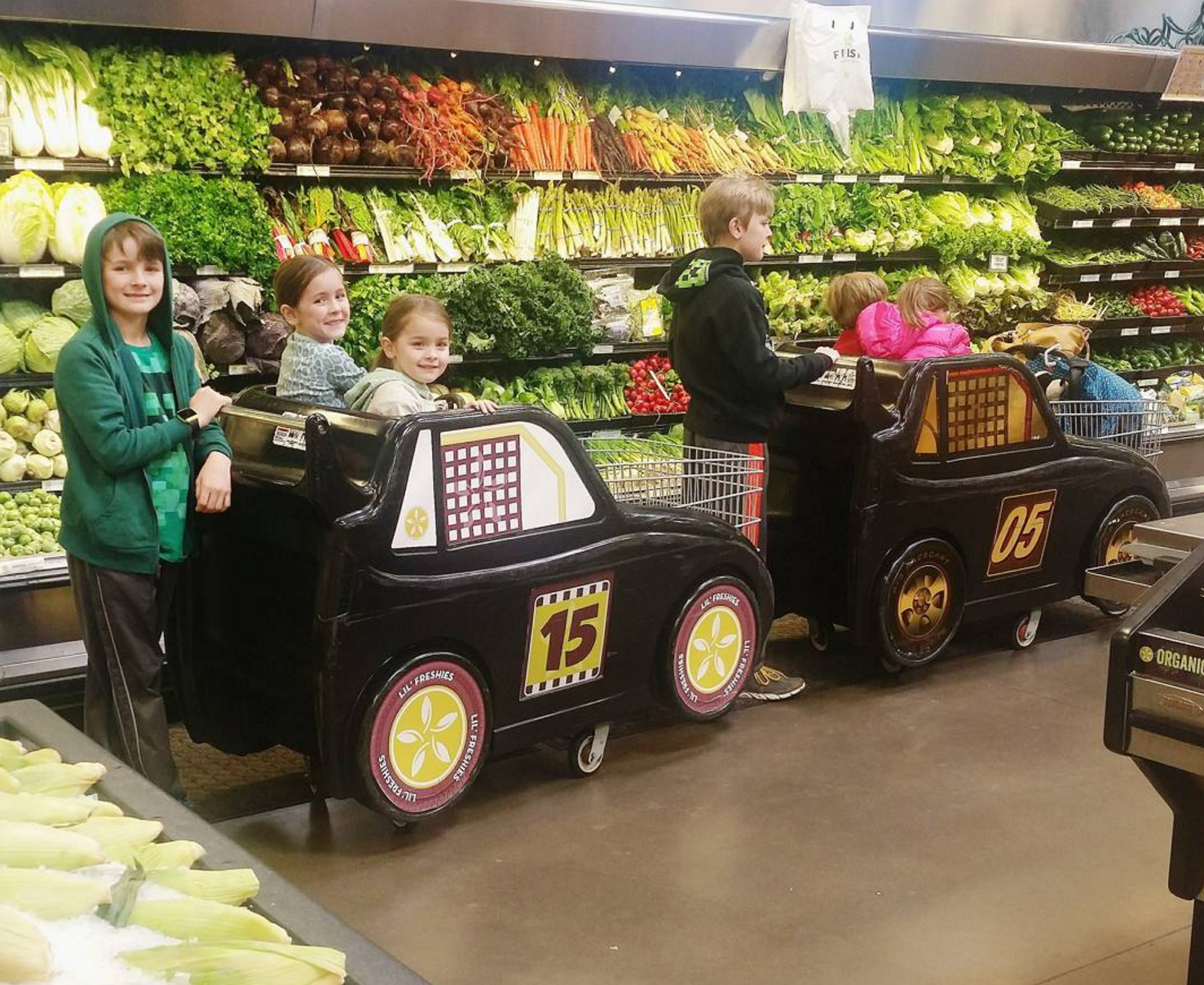 {I felt like we needed a herald going before us declaring, “Here ye, here ye. Your ankles, knees, and hips are in grave danger of assault by these awesomely unwieldy car carts. HIDE!”}

Thank goodness for a nearby gas station, which sold size 2 diapers…so he only had to be diapered up to his armpits.

Shaun and I managed to sneak off to Dallas last Monday (thanks again to my nice mama) for a last minute birthday celebration dinner (for him) and circumcision date (for Honor). I’ll give you one guess which one of them enjoyed that trip more. Spoiler: it wasn’t Honor.

And last night, we had 35 people in our house for a joint birthday (for my bro and Shaun) + Super Bowl party.

4. My physical recovery has been swift and (mostly) easy. Minus some rather atrocious after-birth pains for the first week, I’ve had very little pain or issues. I attribute this to a) the grace of God, b) water birth (way less bruising than usual), c) a brilliant tip from my midwife, which made latching better and helped me avoid the nasty nursing soreness I’ve battled every other time, d) decent amounts of sleep (see below), and e) using an ingenious invention called a Belly Bandit

, which has helped so much with ab/organ support.

5. Honor is a total babe of a babe. He sleeps 5-6 hour stretches at night, takes great naps during the day, eats really well, and is generally the picture of health and contentment. Even in utero, he seemed to have his days and nights straight and that has continued (at least in some small part due to the fact that we’ve been implementing our tried and true–for us–sleep-training tricks from pretty much week 1). 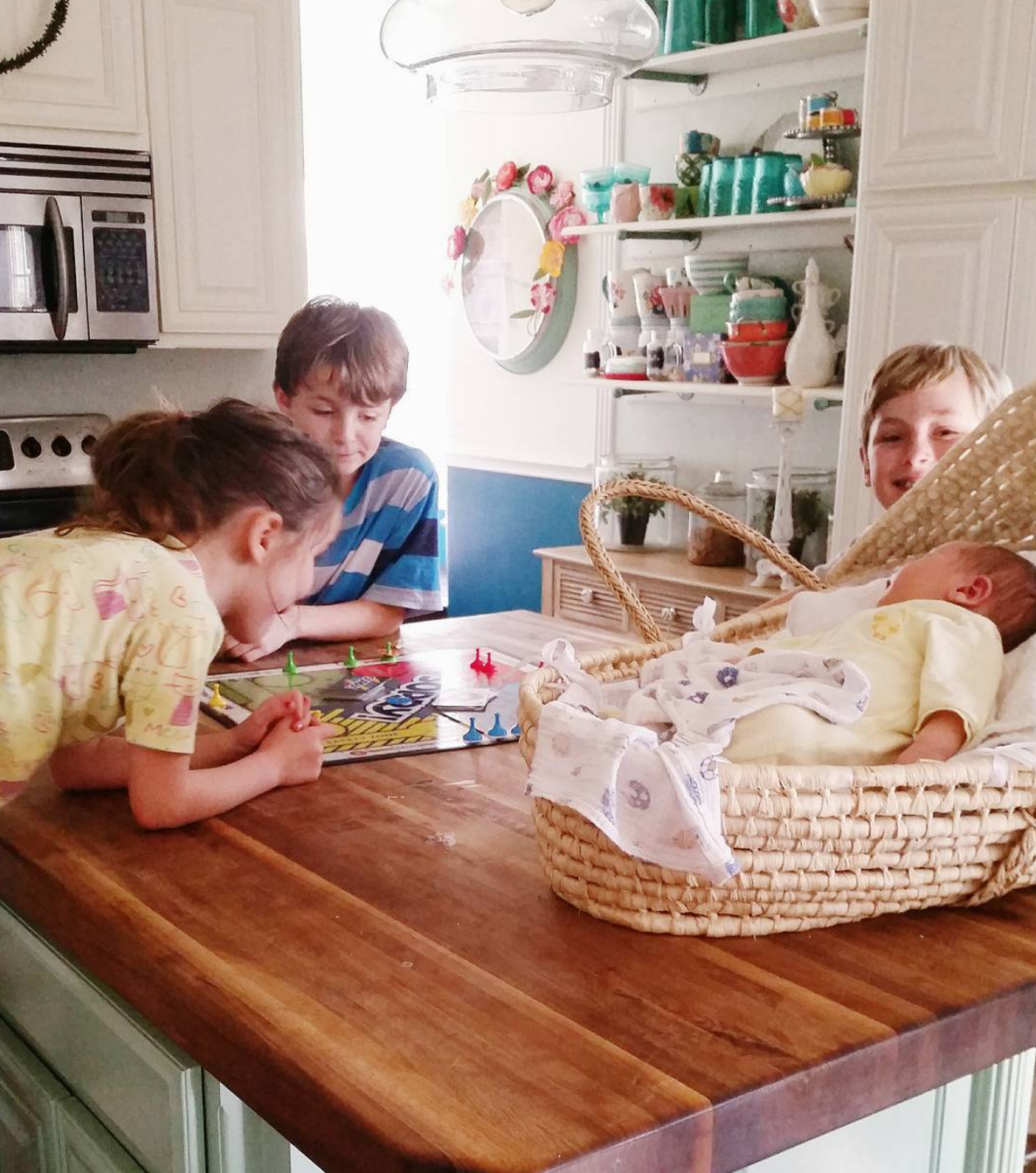 {Hanging out with the big kids}

I’ve mentioned before that I don’t let myself worry (as much as possible) about what life with another baby in the house will be like…mostly because it doesn’t change a thing, and it doesn’t help me prepare. 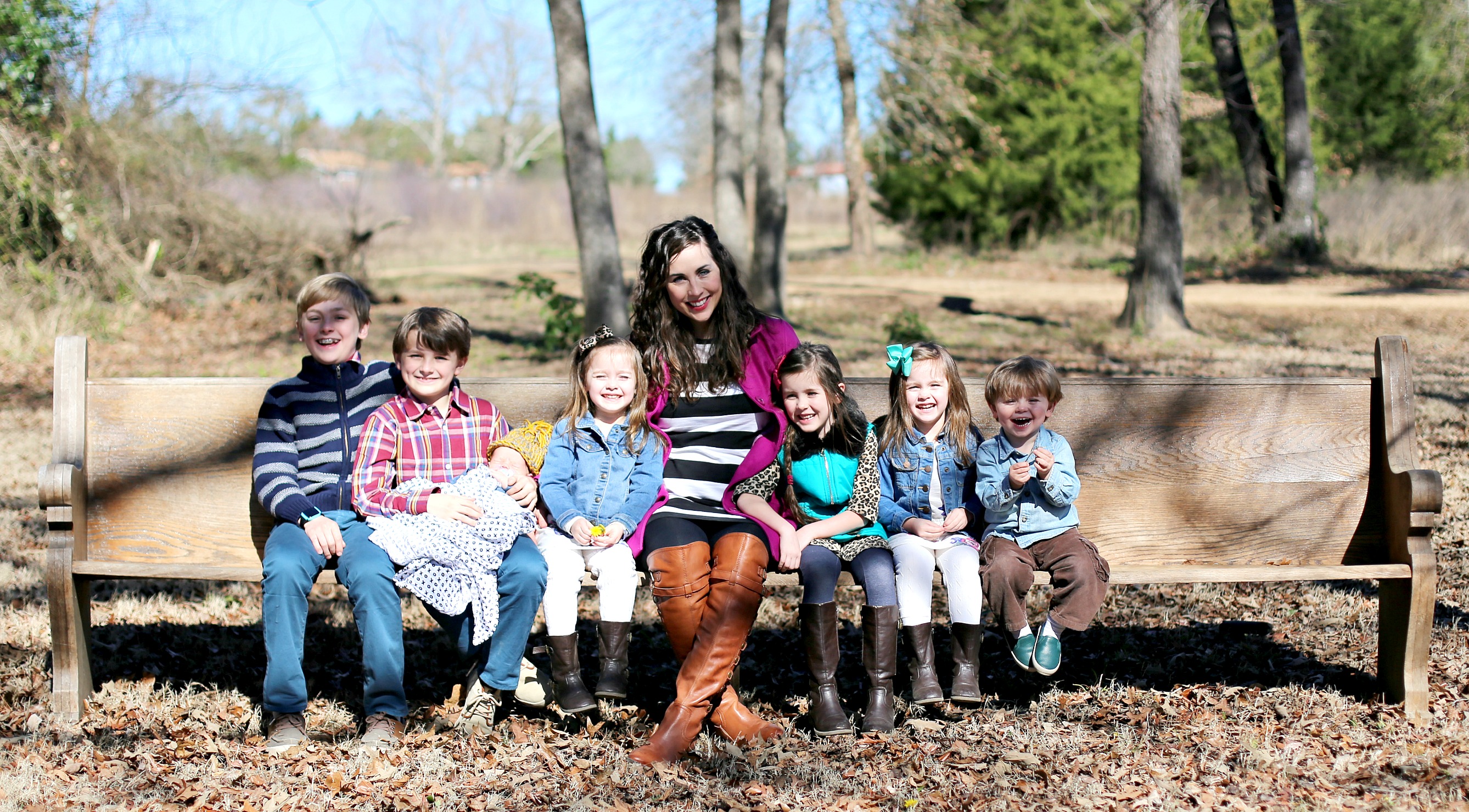 {Hey look! I finally got a new photo that we can use as a blog-header. One that includes ALL of my children and isn’t 3 years old. How long will it take me to actually get it up there on the home page? Who. Knows).

It helps that I’m not a worrier in general, but I can be a stresser (the two are different in my mind). But even with the inevitable hiccups and hardships that come with introducing anything new–much less a tiny human–into your life, each transition has been better than I expected–at least partially because I keep my expectations low or nonexistent.

I may sing a different tune when it comes time to stage our current house, sell it, and then move (the goal is a couple of months, but we’ll see). For now, though, I’m trying to do the next thing and not worry about the stuff I can’t get to yet.

So far, so good. Because God is good. And hard is not the same thing as bad. (Come to think of it, neither is easy…because sometimes, we just need a little stretch of unexpectedly easy to rejuvenate our spirits).