I almost feel embarrassed to admit that I’ve gotten horribly sore (we’re talking cracking, bleeding, blistering…the works) with every single baby except Honor. After all, that must mean that–six babies in–I still couldn’t figure out how to get a good latch.

Thing was, I’d had several people–long-time midwives and lactation experts among them–confirm that there was nothing wrong with my latch. Everything was where it should be. Baby’s lips were flanged. We were good. I’ve been able to successfully feed all of my babies for a year or more (well, Ezra actually only made it to 9 months, but that child ate so. much. food that my body literally could not keep up enough supply, at which point I got pregnant, and my milk supply completely tanked), so clearly, I’m doing something right. But for the first two weeks, I’ve been in so much pain that I dreaded every single feeding.

I have several mama friends who have confirmed the same–their latches were good, and nursing was going smoothly. Except for the fact that, until calluses formed, the entire process was excruciating, every single time. Of course, I’ve also known a few friends who have never dealt with nursing soreness, regardless of how practiced or not they were, so I just figured I was among the “lucky ones.”

You know who you are: the ones who take deep breaths and hold them to stifle the screams as your baby latches (or maybe you just muffle them into a pillow…not that I would know anything about that). You stomp your feet and hunch your shoulders up to your ears until, finally, the sucking numbs the pain, and you can relax a little. At least until next time.

If this sounds familiar, then this post is for you. 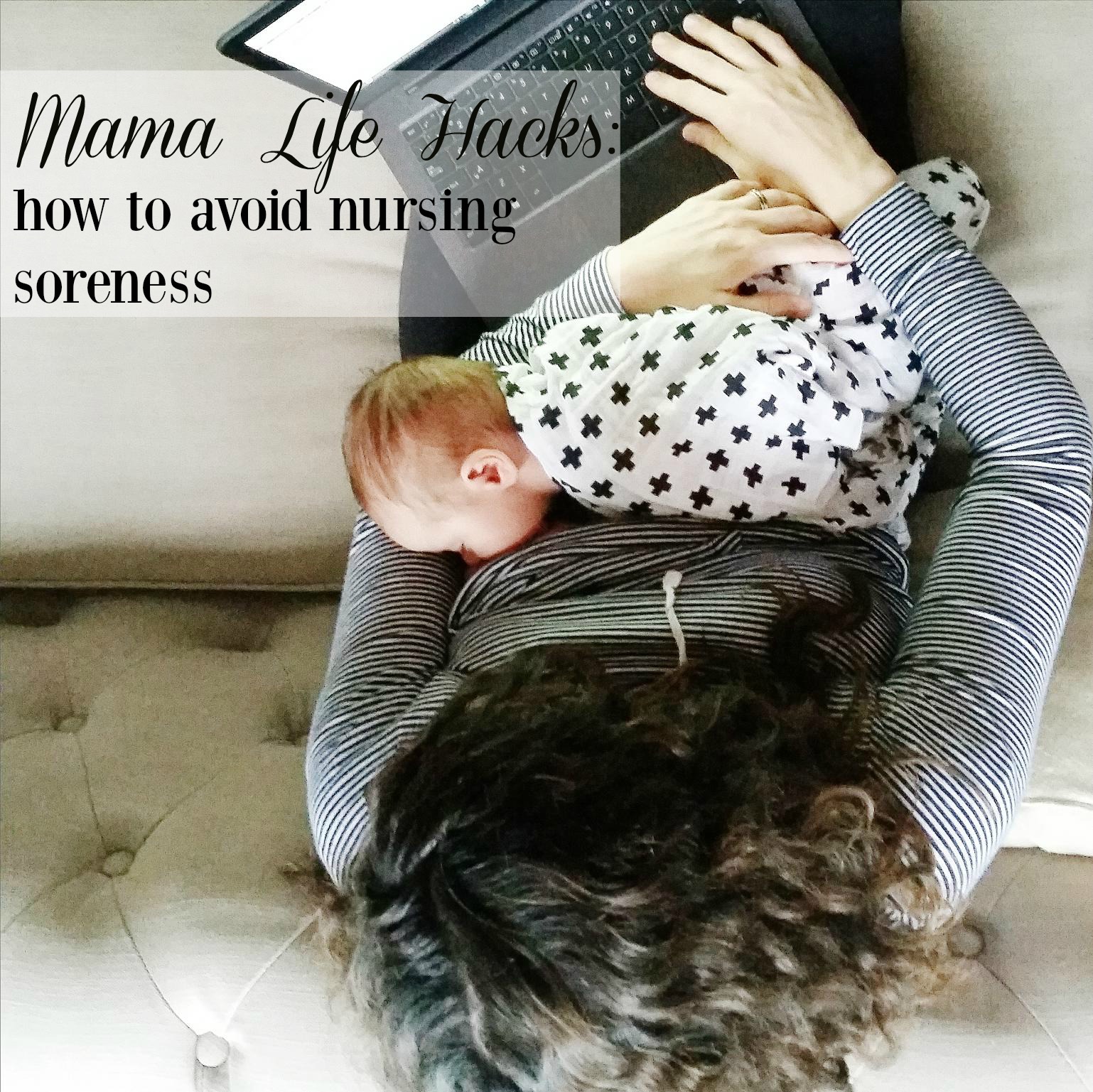 Because, for the first time in my considerable nursing career, I did NOT get sore while feeding my newborn, and it made a worldof difference in my recovery and mindset about feeding my baby in those first few weeks.

And I have my rock star midwife, Melena, to thank for it.

Honestly, I don’t know that she would have even presumed to tell me anything if I hadn’t mentioned that fact that I dread nursing for the first bit after I have a baby (because who wants to tell a mama of so many something that she surely already knows?). But, since I did bring it up, she asked if she could show me something that had been helping her clients. And I said, OF COURSE! Honestly, I was a bit skeptical that anything would work for me and my (apparently) sensitive skin. But I was willing to give it a shot.

Thankfully, she sent me videos to show you (the first is real people, and the second is done with sock puppets, so pretty inoffensive to even the most modest) because I’ve thought about how to describe the latching process several times, and I just don’t think I can do it justice, especially for those of you who (like me) need visual aids for this sort of thing.

The first part of the process is a different kind of position/latching method than I’ve ever used (seen in Video 2), and I honestly found it awkward and strange (I think almost anyone would). But I still did it for the first several days because I was determined to do everything I could to avoid the pain. And I believe it helped Honor to get an especially deep latch from the beginning. (I have since reverted to my usual latching method, and it works great now that I’ve got the second part of the process down).

But the second part, which isn’t featured in the videos, was the the most life-changing for me.

Once Honor had a good, deep latch, Melena had me basically slide him horizontally away from the breast on which he is latched toward the opposite breast. Not a lot. Just enough so that, instead of being directly on the nipple, the baby is, instead, slid away (as in toward the opposite arm, not down toward your navel), which redirects the nipple toward the roof of his mouth and takes all of the sucking force of off the ridge.

Oh my goodness, y’all. It’s so simple–literally a 1″ shift at most–but so effective.

As in practically no soreness (there’s a bit of a learning curve, and all it takes is a couple of minutes of sucking in a bad position to get a little bit sore, so I can’t say zero pain).

I spent the first 3 days thinking it was too good to be true. That surely the chafing and cracking were still coming. Something this easy couldn’t possibly have been the solution all along.

I am now convinced that it could and is the solution to my nursing angst.

I had considered sharing but wasn’t sure how many might need the info. But when I referenced this tip in passing in one of my posts and got a barrage of comments begging me to elaborate, I knew it was something that needed a blog of its own.

When I asked Melena why more people weren’t sharing this trick, she said that she was never taught this either and can’t even remember how she happened upon the videos (that I shared above) but that they just made sense to her. So, she started sharing with her clients, and they started seeing results. She also said that she knows many lactation specialists who teach that a good, deep latch–with the baby’s lips flanged–is the only factor for success, when, in fact, the positioning of the nipple in the baby’s mouth is equally (or, as I discovered for myself, MORE) important.

I so hope this helps you guys as much as it helped me. As I mentioned earlier, it completely transformed my view of nursing in the early days. I love nursing my babies once the soreness goes away. And I am determined to fight through it at the beginning to give them mama milk. But to not have to deal with it at all? It almost feels to good to be true!

Praise God for wise midwives who risk the wrath of potentially know-it-all mamas to share their wealth of knowledge!

P.S. Feel free to pass this along to any mama friends who might need to see it. I guarantee they will thank you for it.