I know this is what every mother of a newborn says every.single.time, but–well–I’m willing to be a cliche just for the chance to exclaim how ridiculous it that my seventh kid is already a month old.

Over a month, actually, because, despite my best intentions to get this blog posted last week on Thursday, when he officially completed his one month tenure on planet earth…it didn’t happen. And, yes, I know that I say that a lot. Ce la super-busy, constantly-distracted, nursing-daze vie. (And good for you if you actually deciphered that last sentence).

Honor is just the sweetest thing, y’all. I know I said the same thing about Theo on his one month “birthday” (and I would have said the same thing about the twins too if I hadn’t been too sick battling mastitis and shingles to blog when they were a month old. Yuck). And it was just as true. But in a different way. Theo is a ham. He dances. He squeals. He even does a dramatic, Hamlet-esque stagger/chest-clutch/collapse move when his brothers pretend stab him while playing swords. It’s one of the funniest things I’ve ever seen a 2-year-old do…especially since no one taught him to do it. But most of all, Theo SMILES. Almost all the time. A big, gap-toothed, cheesy grin that you can’t help but return. He’s been like that since birth, practically. 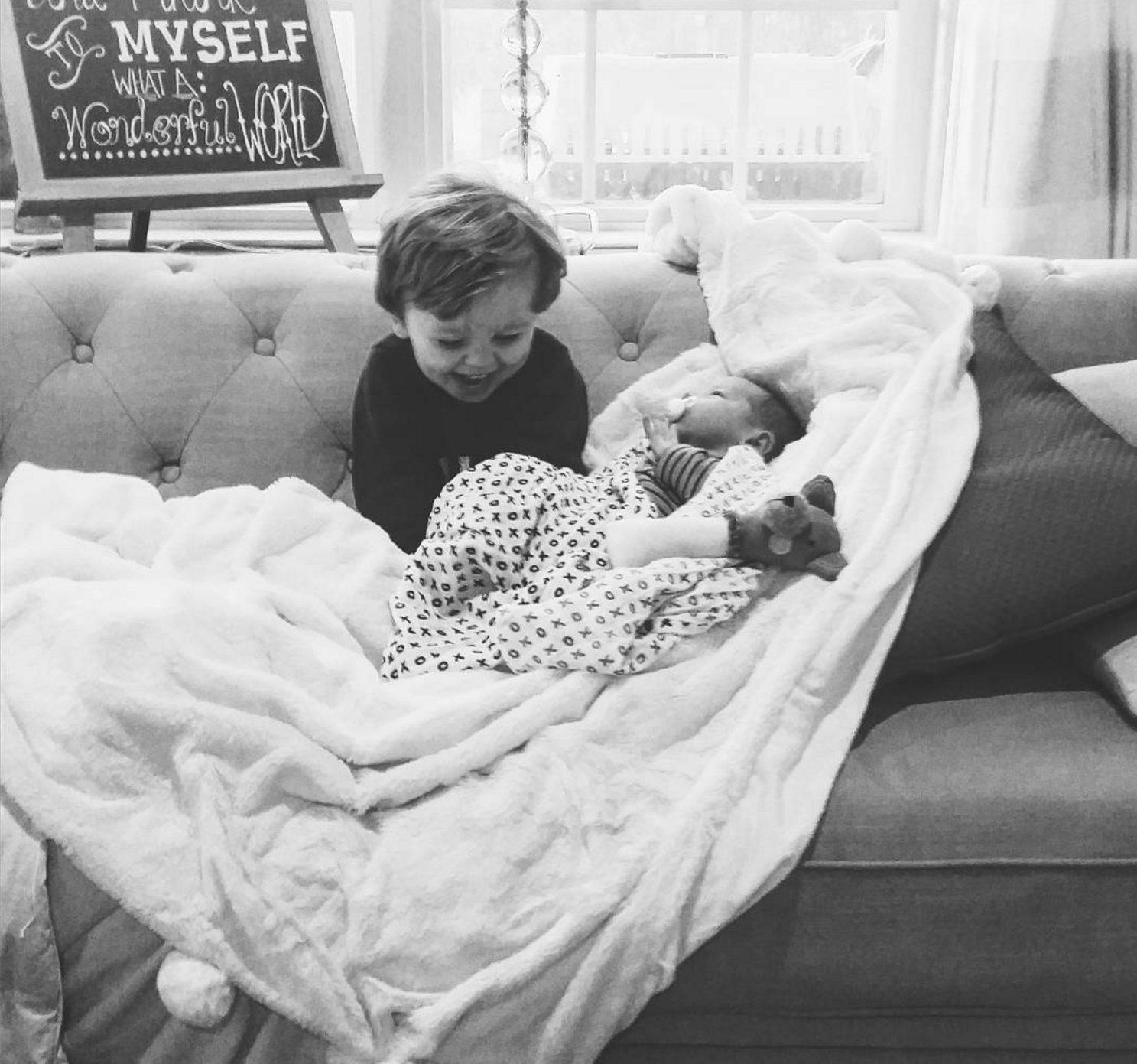 See? Solemn as a tomb. Clearly.

Honor is different, though. Equally winsome. But, whereas Theo is the constant life of the party, Honor is thoughtful and serious. 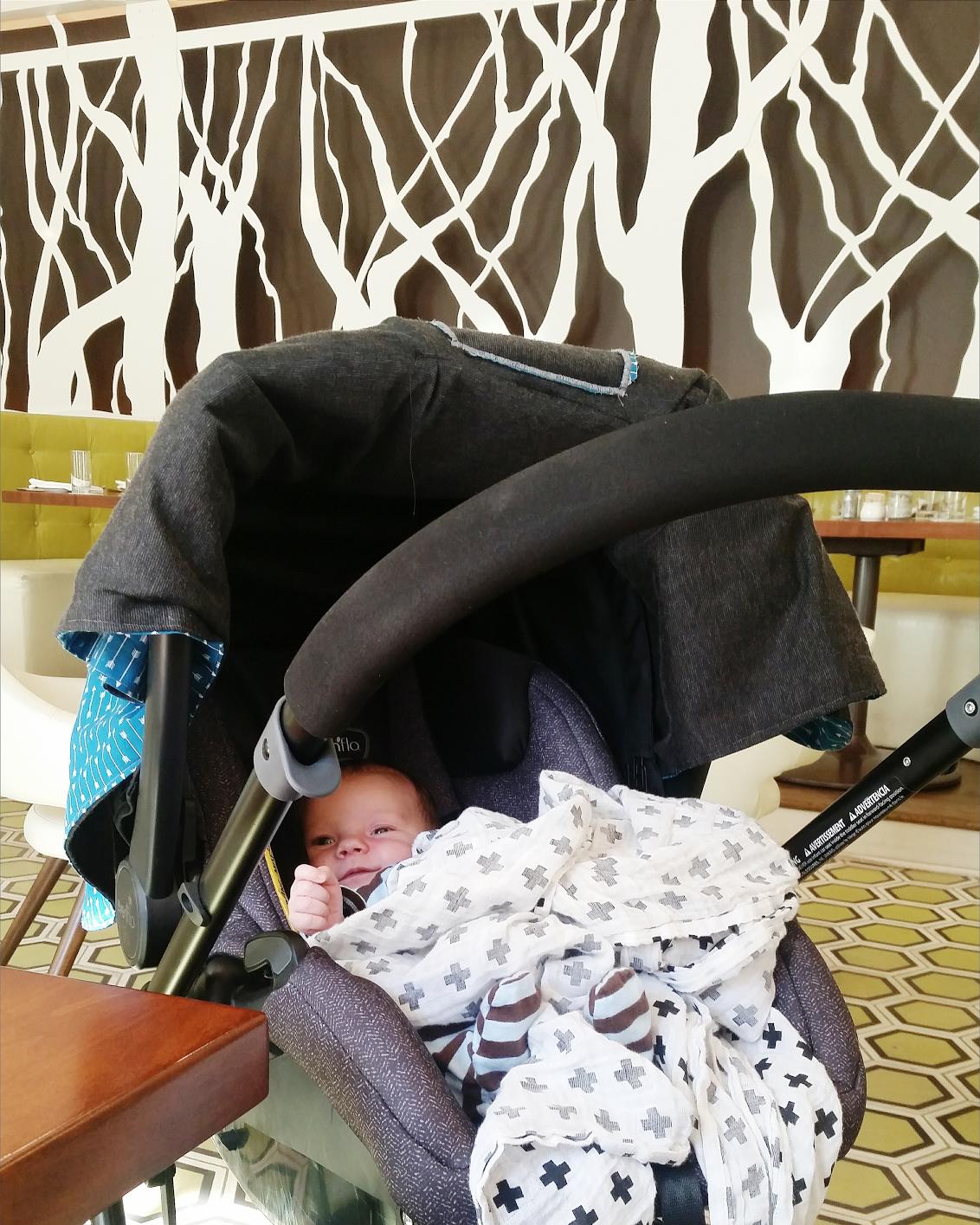 Apparently, he was digging the retro vibe at The Grove–a local restaurant with the COOLEST decor.

He started smiling on Valentine’s Day (little love-bug that he is), but he literally has to work up to it. He gets bright-eyed and happy-looking. Then he wriggles his whole body, as if the smile is buried deep in his toes and needs to travel all the way up to his lips. And then, finally, after he’s cocked his head this way and that a few times, a crooked half smile emerges from a big open mouth. Once he gets going, though, it’s one smile after the other for a little while.

Shaun’s the best at extracting these hard-won smiles, followed closely by Ezra and Simon. Honor’s most content to be held by me (although, he’s a chill baby who will happily go to most anybody), but I rarely have/take the time to sit and coo at him like Shaun does (that implied that my husband has lots of free time…he doesn’t, but when he’s holding Honor, he is usually devoting his entire attention to him. I can be guilty of hauling him around with me like a sack of potatoes on one arm while I get lunch or pull laundry out of the dryer with the other). 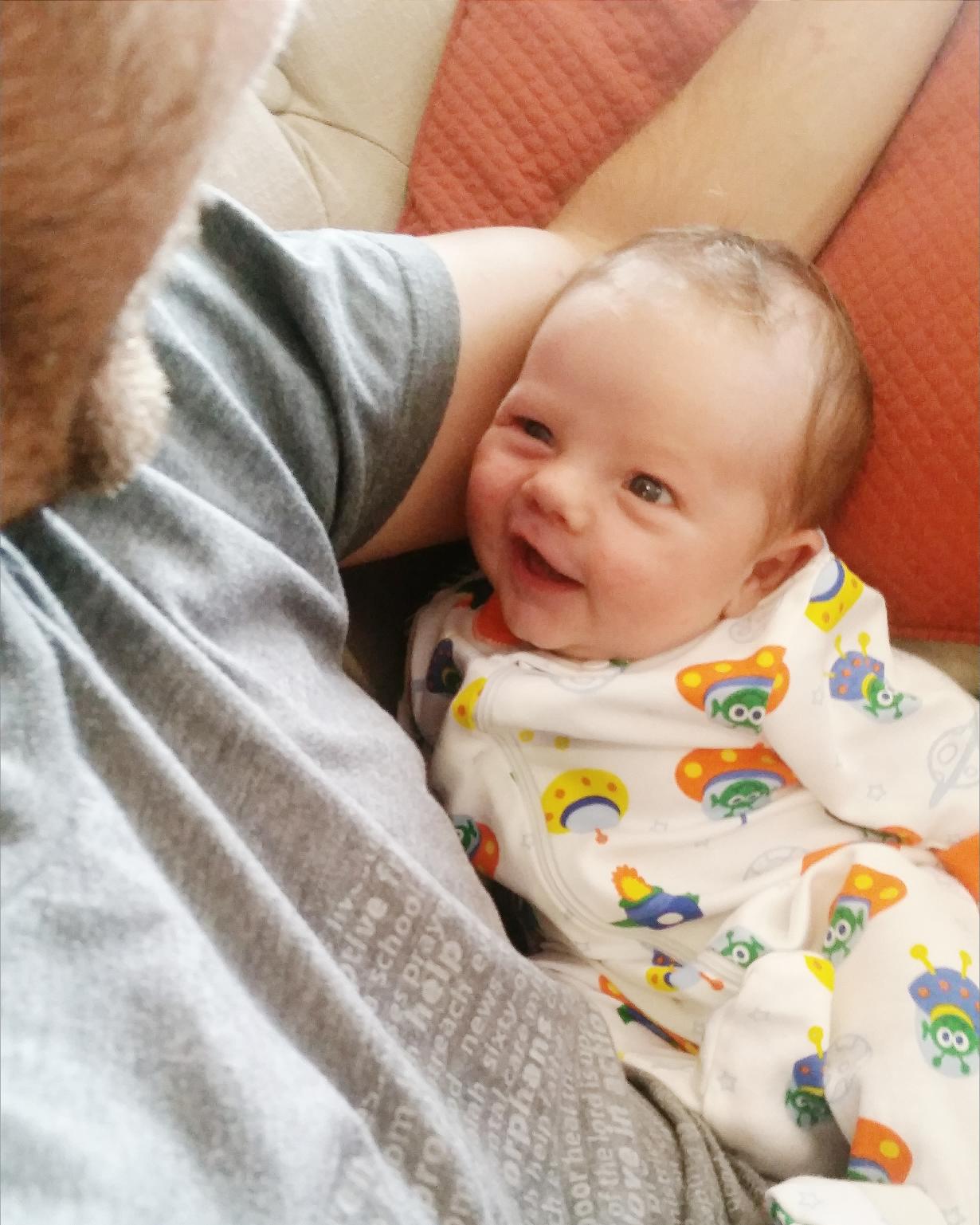 To say that we’re all completely smitten with Honor is probably completely unnecessary but no less true. It’s not unusual to hear an exchange that goes something like: “Mama, can I hold Honor?” And then immediately: “And me next?” Followed by: “And then me?” And: “And then ME!” And finally: “Oh man! I wanted to hold him. Now, I’ll have to wait forever!” 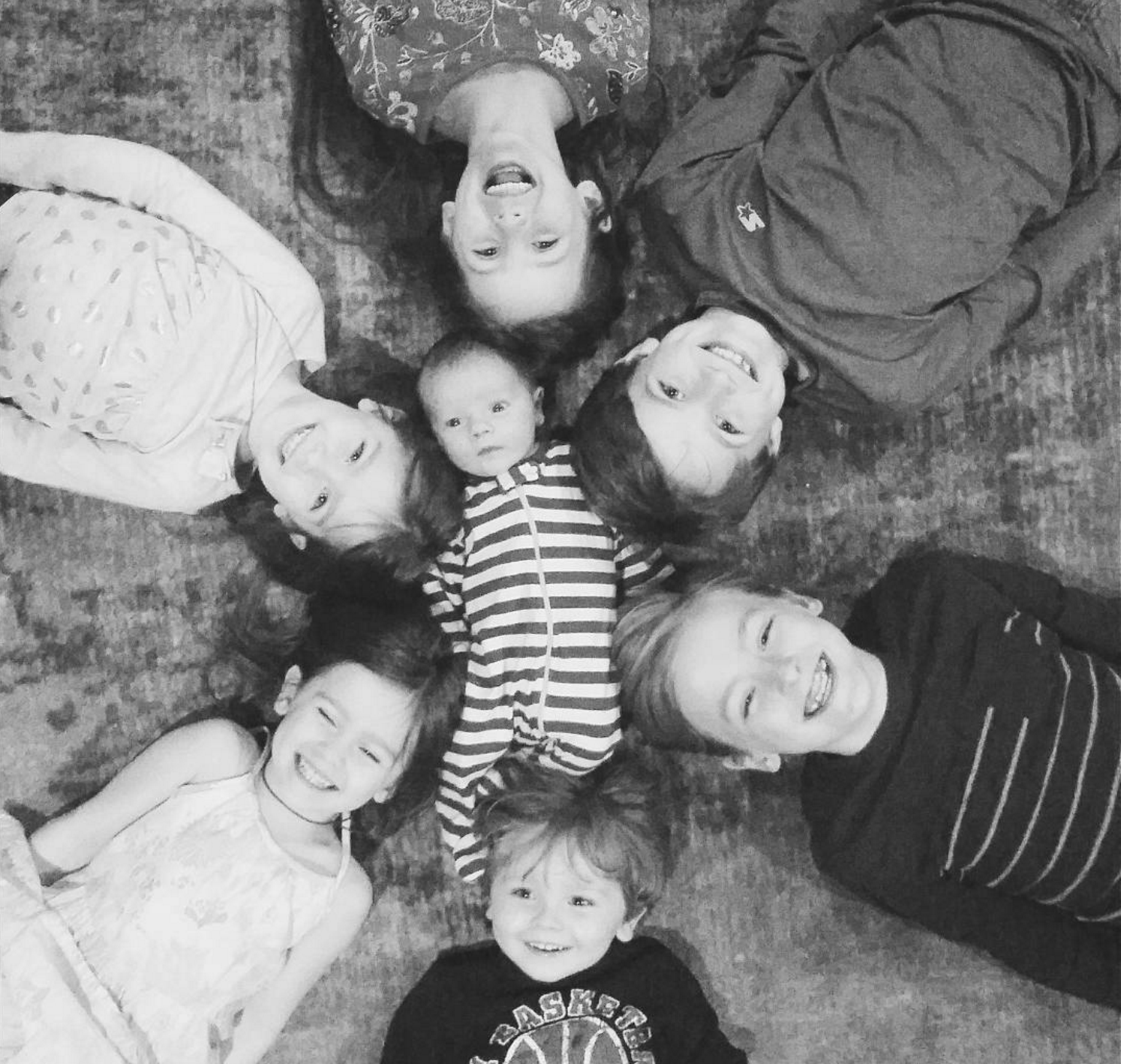 Surrounded by his fan club.

Everybody pitches in, but the older boys, especially, are sources of genuine and constant help. They hold him while I eat. They change his diapers. They fetch clothes and dress him. They load him in his car seat and carry him to the van. If they could feed him, they would do that too.

And almost none of this is because I ask them to (although, when I do ask for help, they are very quick to respond). They just adore their baby brother and are eager to be included or in charge of anything that involves Honor. They were the same way with Theo (less so with their sisters since they were so much younger when they were born), and they still are, but there’s just nothing like a brand new little human to get everybody’s attention.

I say this, yes, to brag on my sweet sons but also to encourage you mamas of little-bitties (only) out there that this day is coming if you keep plugging at training those soft little hearts. And it is a good day, indeed.

I know not everybody is into the newborn stage, but I love it. Much more so now than in the past (that’s my mama experience talking; I know now how fleeting it is). I think I would happily have a newborn in the house at all times if I could. There’s just not much better than holding a bundle of yummy-smelling squish for cheering you up or calming you down. 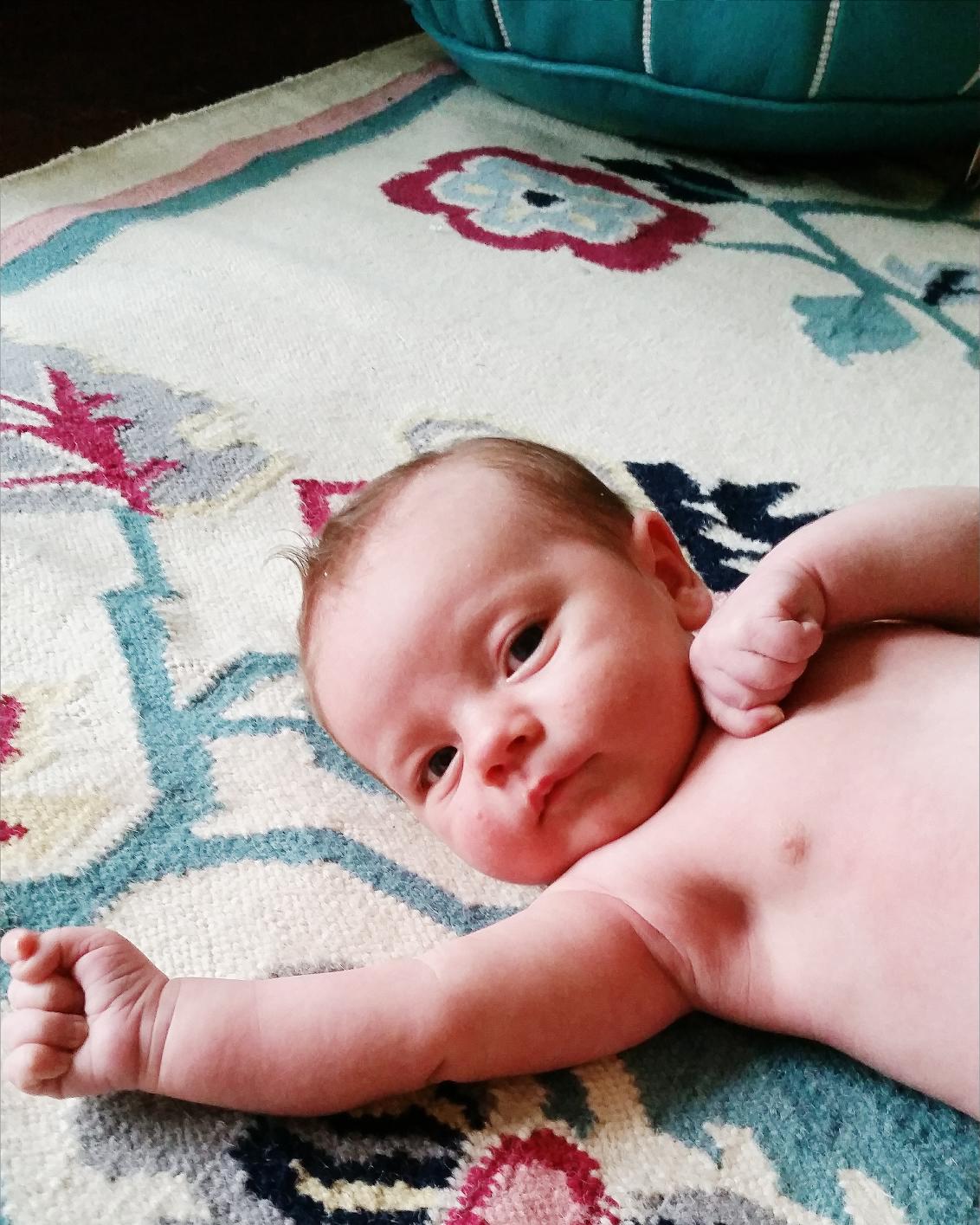 Hey, girl. Thanks for getting down on my level. How about you change my diaper while you’re here?

I love the grunts and the squinty faces they make when they stretch. And don’t even get me started on baby yawns. Even their snores are cute, for crying out loud.

Of course, I know that it helps (immensely) that I have healthy, easy-going babies who sleep well (Honor’s still holding steady at 6 hours a stretch at night, but I’m hoping he will bump that up soon). And I certainly don’t take that for granted. But babies are just cool, so that’s my story, and I’m sticking to it.

Thank you, Lord, for Honor. We sure are tickled he’s here!

P.S. After looking at the pic of above of all 7 and then at Theo’s one-month pics compared to Honor’s, I’m starting to believe that, maybe, our kids look a bit alike. #yathink

4 thoughts on “A Month of Honor”