I write those two words with almost the same level of trepidation that I would if I were texting a friend whose birthday I’d missed (something I did last week, actually). Everything is such a blur at the moment. But I still feel like I “should” be blogging…should be updating and encouraging and sharing with you.

In the past, I don’t think I couldhave gone a week without blogging without a significant level of guilt because I’m a dutiful sort, and I feel “bad” if I don’t do what I say I will…even if no one else is requiring it of me.

HOWEVER, I know that you all are busy too–that you understand that some seasons in life are more hectic than others and that you would agree with me when I say that my priorities are better now than in the past when I might have forgone something more important than blogging just for the sake of fulfilling some sort of misplaced duty.

Even so, I miss you guys. I miss writing. And I’m sorry that I’m not doing a better job of balancing all of the things at the moment.

To make up for and distract from my shortcomings, I am posting pictures of Mr. Theodorbs himself in the midst of the Great Raisin Heist of 2017 (aka: what you have to resort to to get a snack around here when Mama is distracted by cleaning/organizing/rearranging all the things that seemed perfectly fine to you to begin with). 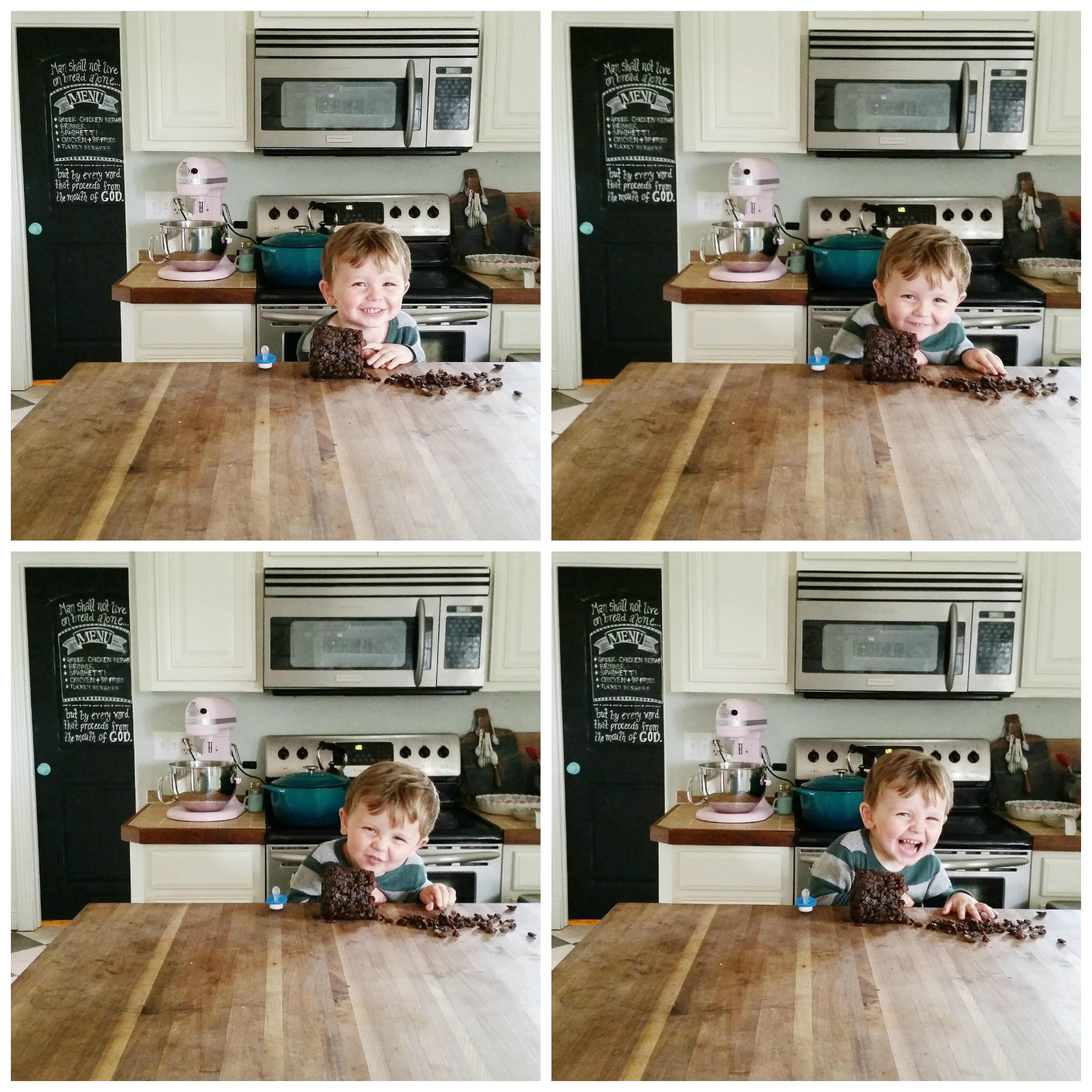 This little boy is like no other of my children so far (true of each, but, in some ways, especially true of him). He is mischievous and happiest when either a toy sword or stick is clutched in one plump fist (or both). He is noticeably athletic–leaping, throwing, catching, and running with a coordination that belies his mere 27 months. He’s reached almost every milestone earlier than any of the others. He is SO cheesy and hammy. Definitely the most theatrical of a bunch of rather UNshy and drama-prone children. He still has his sweet, soft, lisping voice–except when he’s hurt/scared/just plain mad as a hornet…in which case he uses the exact same level of volume and ear-scratching rasp to express all of his woes (makes it a wee bit difficult to discern between “bleeding to death” and “he looked at me wrong”).

And, even though he has his “days,” more often than not, he is a welcome source of smiles and chubby-armed hugs in the midst of the crazy that is trying to get a house ready to sell, finish building the other one, homeschool (including attending our homeshool co-op), teach fitness classes, and put something decent on the table for dinner most nights. Oh yeah. And feed a newborn every 2-3 hours.

Speaking of the new house, the loose plan is to shoot for moving in in about 3 months. That is, if this house sells quickly (only the Lord knows). If it takes a while to sell, we’ll just keep plugging away at the new one. Regardless of when we sell this one (unless it’s a year from now), we’ll be moving into an unfinished house because, even with all of the incredible progress Shaun has made, there’s still a lot left to do.

But we have lined up some tradesmen to finally start doing some of the work (he’ll still be working every chance he gets…just in different areas of the house)–especially key as he’s about to start a round of work trips that will significantly decrease his ability to get things done out there.

The plan–Lord willing–once we get our current house on the market (hopefully this week) is to spend as many evenings as possible at the new house as a family–cleaning, caulking, puttying, sanding, and doing anything else that might lessen the load and expense for any workers that come out.

To that end, I really need to figure out some travel-friendly meals to plan ahead for those nights. We have a small fridge there, and Shaun will hook up a stove for us to use, but it won’t be anything like a fully stocked kitchen, and most nights, we’ll be stopping at the new house to work on our way home from my teaching at the gym. So! Any brilliant ideas you have for easy, portable, reheatable, nutritious meals would be greatly appreciated.

In other news, we’re seriously considering going with quartz on the countertops after all. The manufacturer we were planning to use to fabricate our laminate countertops is no longer available, and let’s just say the samples I’ve seen of the laminate edge I want from local guys have left something to be desired.

We’re still not set, but we’re leaning toward Torquay by Cambria, which comes in jumbo slabs, which we’ll need for the length of the island. Even so, we’ll have to shorten the island by a little over a foot, since the longest option is about 132″. 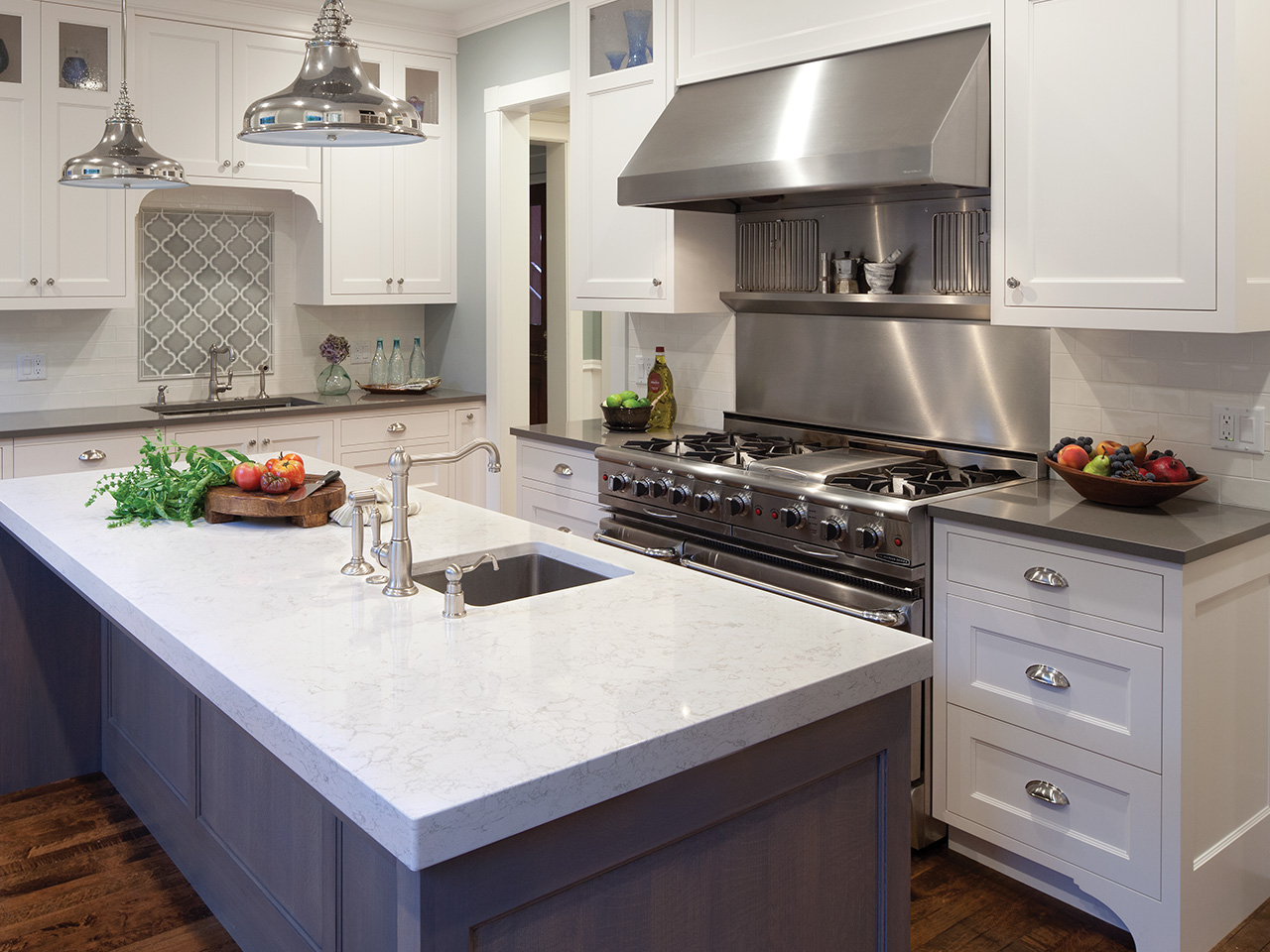 That’s it above, and the color is a pretty white with gray/tan veining that more or less mimics the look of marble.

We’ve gotten three quotes (well 2 wholes and 1 partial) so far. The first was eye-bugging, the second reasonable, and the third hopefully a bit of a steal (we’re waiting on them to come back with what they will charge for the quartz itself; but their install price per sq. foot is almost half of their competitors).

Aaaaand there you go: an update of sorts for the goings-on in these parts.

The good news is that I’ll have to take pictures of our entire house for when we list it, which means you’ll get a more detailed HOUSE TOUR than any I’ve yet shared in–oh–the last six years.

Which means you’ll finally get to take a gander at our master bathroom–something I just know you’ve been hankering to see. Ahem.

Anyhoo. Get excited. If we’re all lucky, I miiiiiight post a room or two sometime later this week.