Whereas I bought almost of all of my deals in person for the house we currently live in (I feel like such a dinosaur saying this, but internet home shopping sites weren’t nearly as much of a thing almost 10 years ago when we started building), I’ve gotten the preponderance of lights, sinks, faucets, rugs, and even furniture for the new house from sites like Joss and Main, Overstock, Wayfair, etc.

I would say that nothing beats a good Craigslist or Facebook swap deal (because thrifting will forever have my heart), but, while I’ve scored my fair share of those too, some of my online clearance finds have been even better (brand new) than some secondhand options I’ve seen. (Not to mention how convenient it is to search for a specific item rather than being at the mercy of someone’s purging whims).

I’ve already shared my tips for finding the best deals online, but what I had yet to discover when I wrote that post was an awesome little thing called Amazon Warehouse Deals. (And, no, this is not a sponsored post, but I do include affiliate links).

I don’t remember how I first stumbled upon it, but since I did, I have scored some pretty sweet deals— from a major discount on Honor’s Moses basket to a $60 chair (brand new) that is currently selling for $340 to a $17 lamp that is still available for $140!

Even if you’ve never heard of it, you’re probably already more familiar with Amazon Warehouse Deals than you think because, if you’ve ever shopped for something on the site and seen the words, “used from $_____,” underneath the item’s description, then that’s a warehouse deal.

Basically, these are open box items–some of which come perfectly packaged and pristine and others which have a scratch or two but are otherwise in great condition (it will tell you the condition in the description of the item so that you know what you’re getting into before you check out). I have only bought things described as being in “very good” condition, and they all have been at least that.

The best part is that they now have an actual entry in the drop-down menu called Amazon Warehouse Deals, so now, instead of looking for the “fine print” below specific items one at a time, you can search for “tufted chair” or “polka dot comforter” or “kitchenaid mixer” or “meat thermometer”–whatever you want!–and it will show all the deals they have for those terms. There’s no guarantee there will be a deal, but it’s definitely worth checking before paying full price. 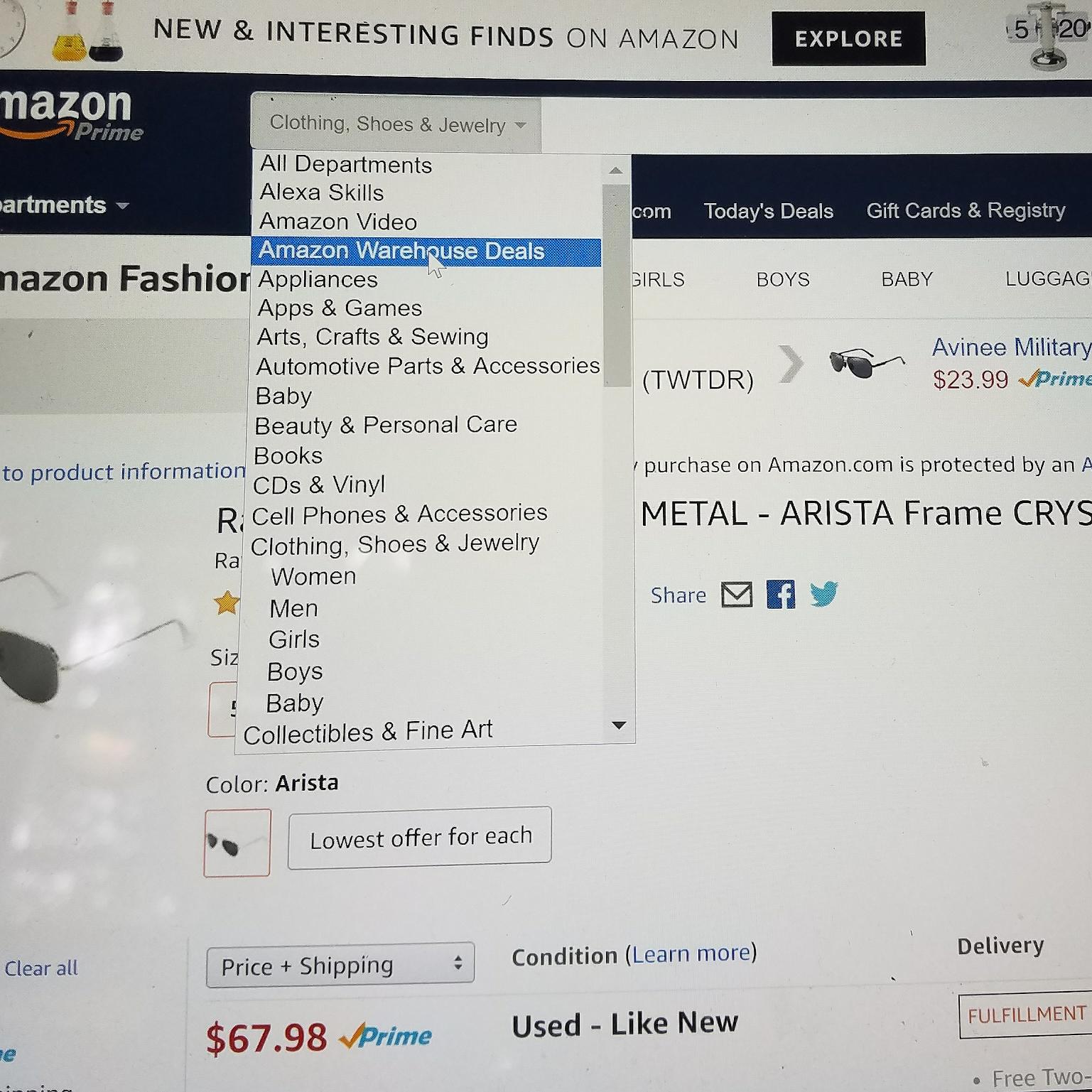 ANYhoo, I know Mother’s Day is only a few days away, and I’m sure all of you fine folks have had your Mama/Grandma/Daughter gift all lined up for weeks (ahem), but in my Amazon Warehouse Deal research, I stumbled upon a couple of deals that were too good not to share, so I whipped up a quick little gift guide (shhhhh…nobody has to know they were on clearance).

AND they all come with free 2 DAY shipping if you’re a Prime member.

1. These rain boots are thee cutest.

I don’t have a pair, personally (although…the ones with the bees are, um, the bee’s knees) but Lindsay does and LOVES hers.

They can be a bit pricey, but if you click the link above, it should take you to several clearance options (limited sizes, but maybe you’ll luck out!). If you don’t see a price immediately, click on the yellow button to the right that says “see all buying options.”

2. I’ve never made it a secret that I love Rifle Paper Co. products, and I think they make fabulous gifts (because what girl doesn’t like pretty and useful?).

Or this fun recipe box!

3. I know most of us aren’t going to be buying anybody a Kitchenaid Mixer, but all three of the color options here are really great deals for a new 5 quart professional series. Some of my mom’s friends and I went in together to buy her one for her 60th a few years ago, and it was a fun gift to give!

4. And while we’re on kitchen appliances, I got a rice cooker for both my mom and my sister-in-law as part of their Christmas gifts last year, and they both love theirs! This one has great reviews and is $20 cheaper than anywhere else on the internet.

Don’t be scared off by the $37 list price. The “used” (not used at all, just repackaged) version is only $16. But hurry! It looks like there are only a few left at that price.

6. I realize it could be dangerous to buy pillows for someone else, but I have recovered an ottoman and two lampshades in this Waverly Santa Maria fabric (albeit in a different colorway) and can personally attest to how gorgeous it is. And $25 is an amazing deal for TWO big throw pillows covered in a designer fabric!

7.  These Ray Bans are considerably cheaper than the retail price. I still love mine, and they are still the only pair of sunglasses that I’ve kept up with for 2 years.

I could keep coming with the great deals, but I think you get the idea. Amazon Warehouse Deals is the bomb!

And now, I will leave you to do your own deal browsing because the appraisal finally came through on our house, which means I can officially start packing! Yip-to-the-ee! (Sort of serious. Sort of not).