My goodness, have I got a lot to share with you guys! We just got back from a fun family trip to Gulf Shores, Alabama, which I will post about later this week (Lord willing), but today, I wanted to take a second to talk about this little nugget of sunshine, who is… 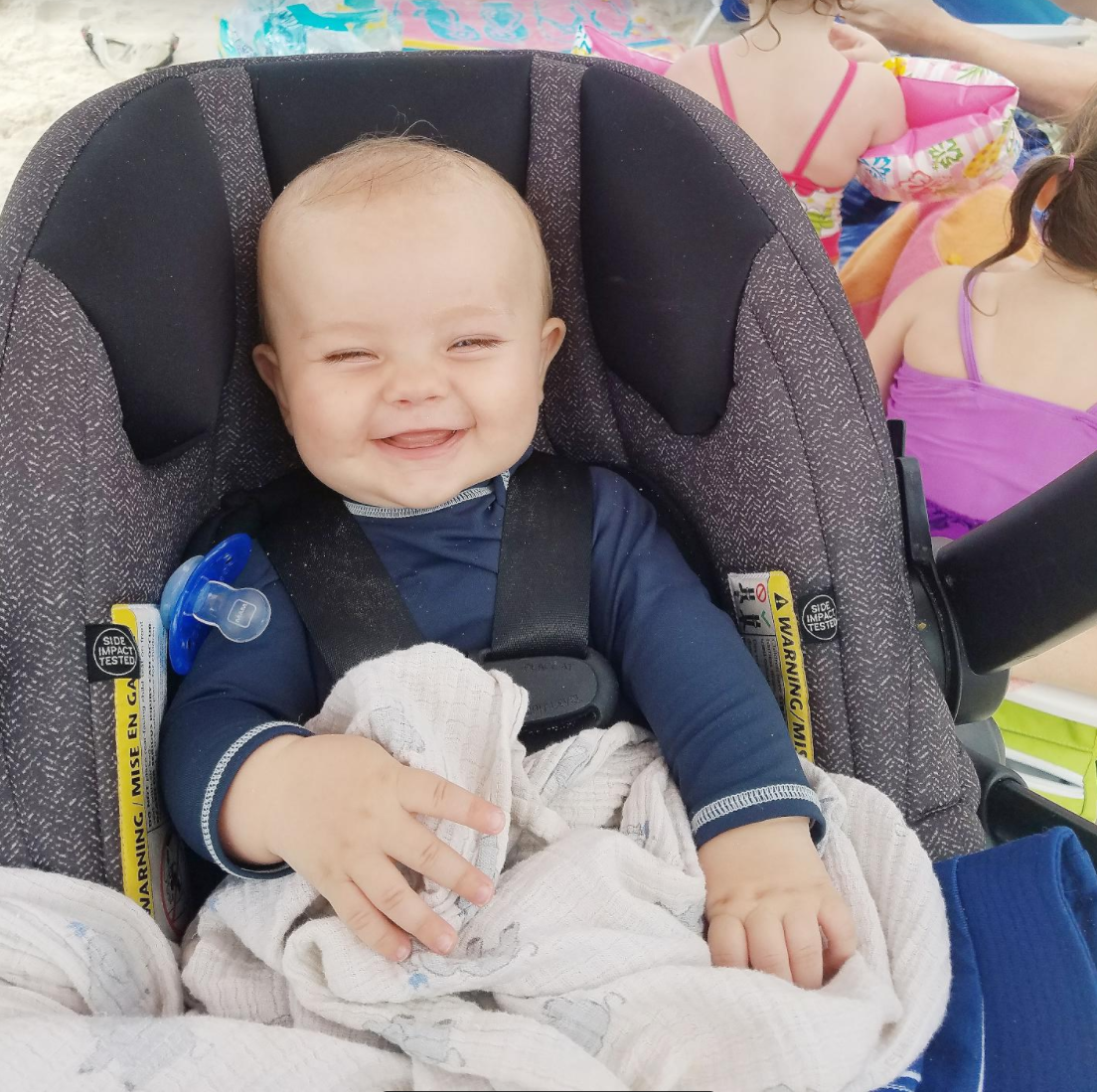 Because a baby who is easy to take to the beach is an easy baby, indeed.

Honor Daniel is pretty much the definition of a dream baby. Which…is crazy because I didn’t think any baby could be more chill than Theo (not sure Honor is, but he’s giving him a run for his money). Of course, while Honor coos and dimples and does his best to win over the planet (pretty successful effort…everywhere I take him, people fall in love with him), Theo alternates between being thee funniest little kid and…a 2-year-old (need I say more?). 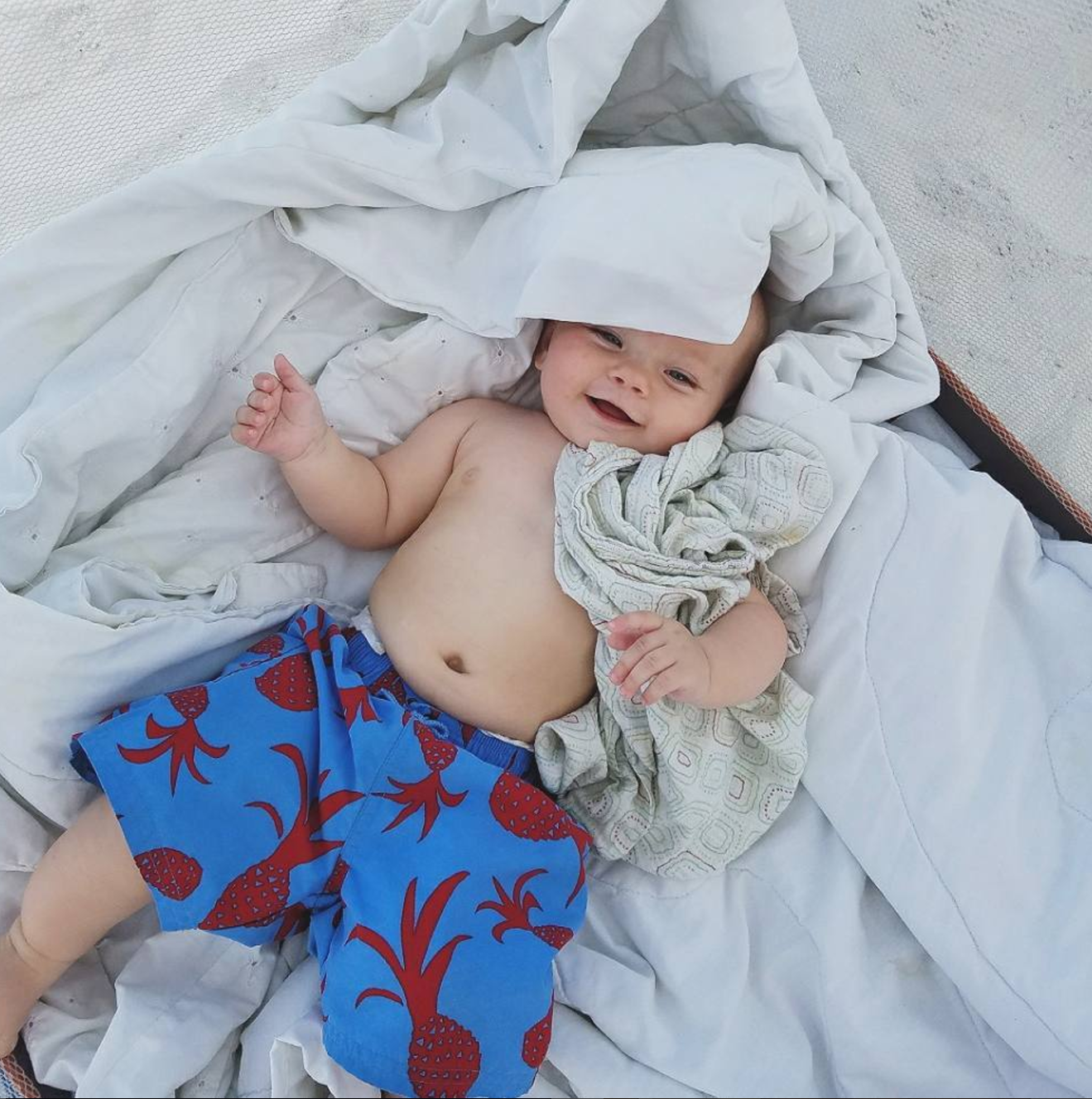 It’s okay–better than okay!–if you have abs like biscuit dough when you’re this age. Oh, his rolls are scrumptious!

Theo can still be delightful (often is), but in terms of  charm points, Honor’s definitely ahead at the moment (but then, he kind of has the unfair “baby” card to play). Especially now that he’s back to sleeping through the night (it helped immensely when we moved upstairs, and his pack n’ play was no longer 18″ from me). 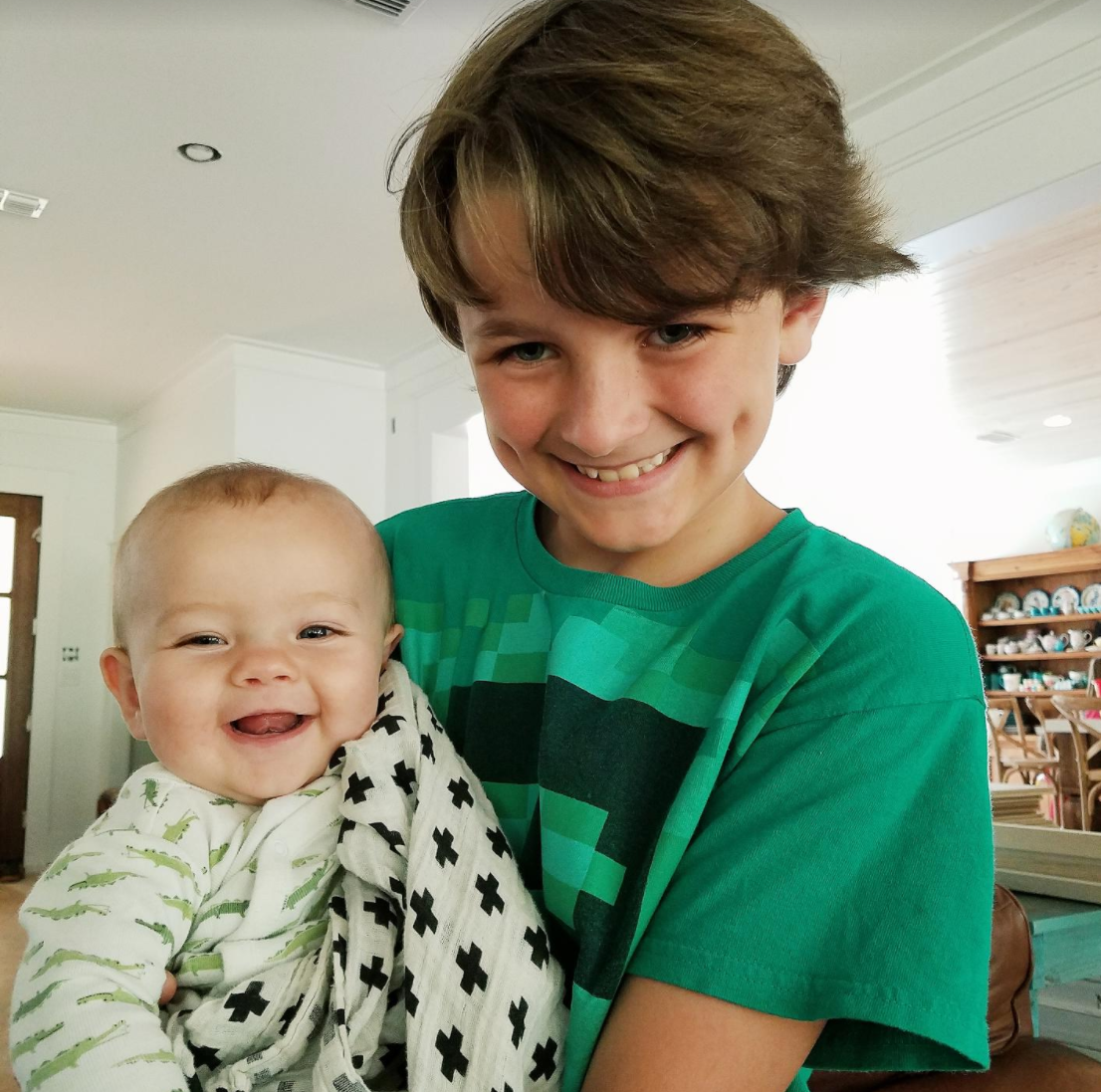 No one around here ever complains about holding Honor. Wonder why.

Even with teething (his bottom two juuuuuust popped through), he spends about 98% of his waking hours alternating between smiling, grabbing his toes, happily drooling on everything in sight, giving big, sloppy, open-mouthed kisses, and checking off every other “cute” box in the book. He wakes up in a good mood and goes to bed easily. It’s honestly kind of ridiculous. And I can’t imagine an easier baby to travel with (it’s a 9 hour drive to Gulf Shores).

As far as milestones, he’s a total slug. He rolled over at 3 months (pretty par) but hasn’t done practically anything since. He doesn’t crawl (or make any attempts to), doesn’t sit up on his own (although he’s quite strong and perfectly capable if he actually tried), and couldn’t care less about rolling all over the carpet (not that I blame him, since our current rug is a dhurrie one, which is about as soft as a ticked off porcupine). 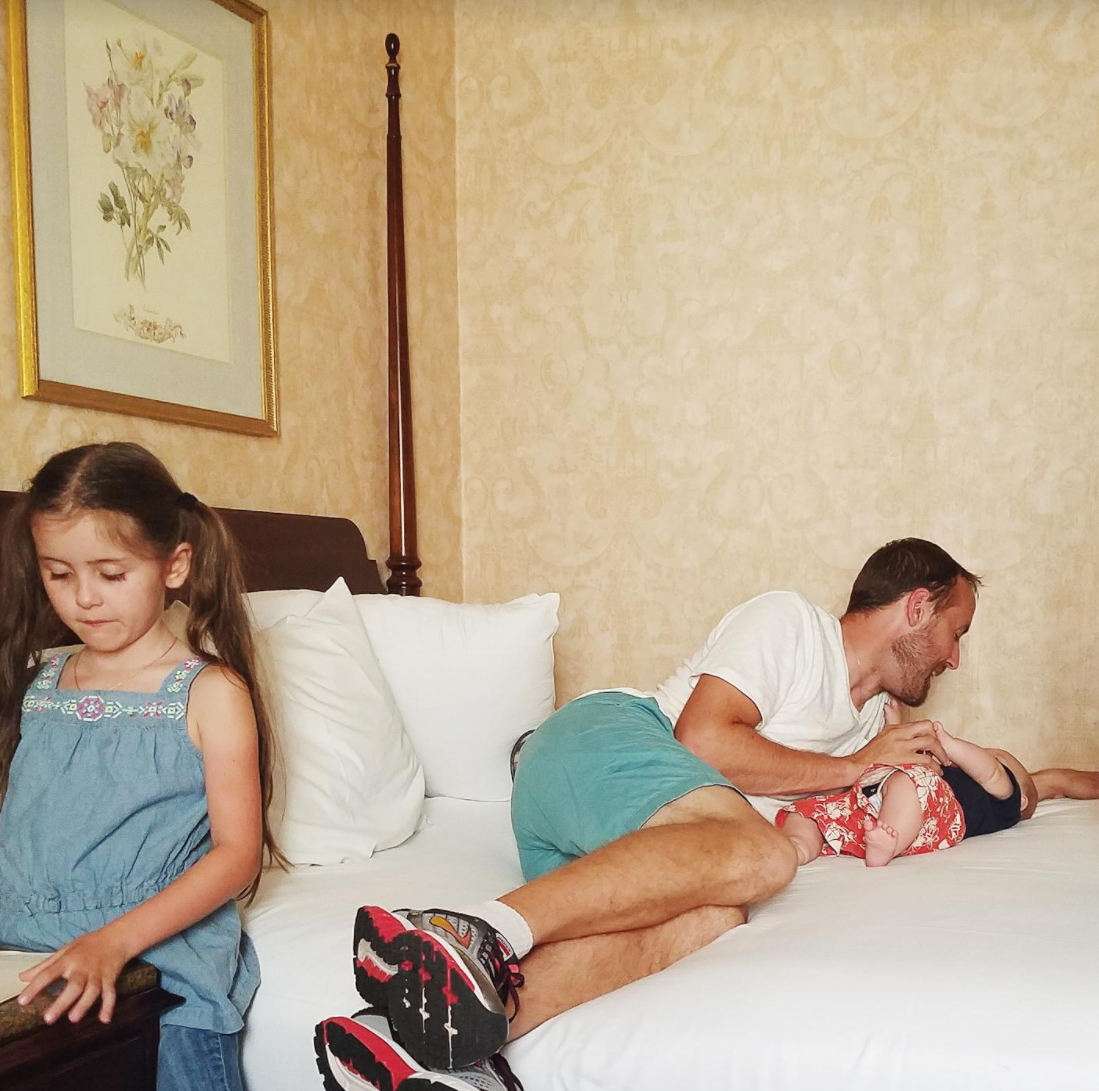 Crawl?? Ha! That’s for peasants. Why crawl when my adoring subjects will carry me?

Theo was the exact opposite in this regard. He did everything early. Earlier, in fact, than any of my other kids. Honor, on the other hand, is laidback and easygoing in the extreme and seems in no hurry whatsoever to be his own man, er, baby.

But he sure is the sweetest, cuddliest little slug you ever did see. And I know full well by this point that a mobile baby is a much harder baby to keep up with, so I’m actually grateful for my little 6-month-old sloth–especially since we don’t have flooring down in most of the house yet, and dirty, paint-splotched concrete is less than ideal for soft little baby hands and knees. 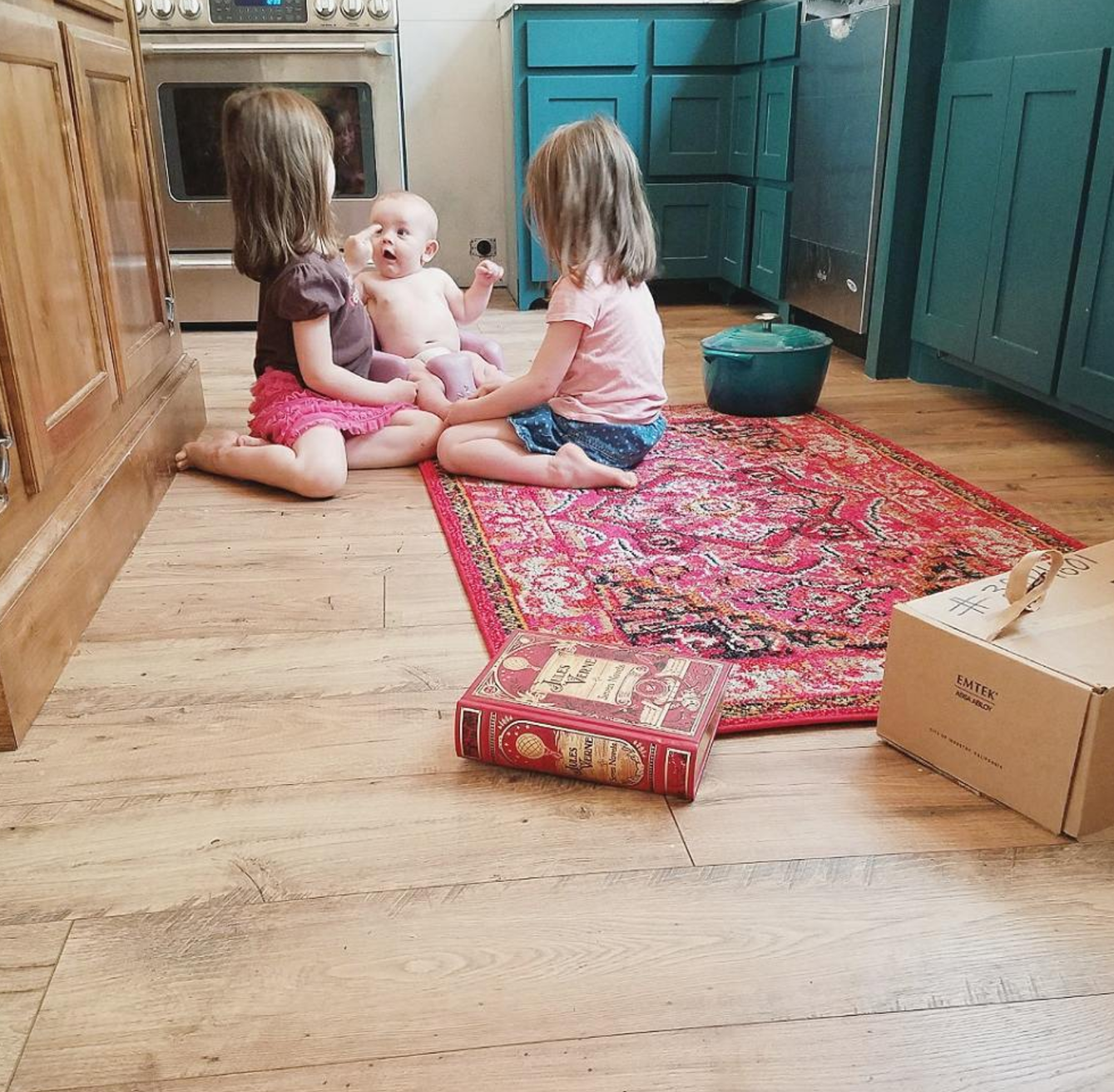 His reaction to Nola’s revealing that, one day, he will be required to transport his adorable chub all on his lonesome from point A to point B–AKA: walk.

I know that every mother feels a little shock upon realizing that her new babe is “suddenly” no longer an infant, but this past 6 months really have been the most incredible whirlwind with Honor’s birth, prepping the old house to sell, selling it, busting our buns to get the new house ready to move into, moving, and then settling in (at least a little). I can definitely remember life before Honor (so I won’t say it feels like he’s always been here), but it seems a bit like an alternate reality–and one with considerably less sunshine and smiles (cheesy, but this kid really is a sweetheart).