I almost didn’t post this. Because it’s been a…month (?) since I posted Part 1, and surely, no one cares anymore. Right? (Pretty sure right).

But I’ve had the text written for ages (the pictures are always what slow me down), and it seemed off-kilter to post a Part 1 but no Part 2, so here we gooooo…

So, where were we in the grand Hawaii birthday adventure? I think it was somewhere between yawn and ho-hum. I mean, we’d been in Hawaii for two whole days, and we had hardly done diddly-squat (but, oh, what a GLORIOUS diddly-squat it was).

Wednesday is when things started picking up considerably in the activity department, though.

Shaun worked half a day, and then we packed up the rental car and headed off to find a hike. What we found was a near brush with death. J/K. But only just. Because, while not deadly (for us), the Koko Crater Tramway hike is no joking matter. Basically, you start at the bottom of a rather dusty, barren-looking strip of old rails, and you keep climbing them, up, up, UP until you finally arrive at the top gasping and heaving, with burning legs and (if you’re like I am) a heavy dose of vertigo if you glance back down. 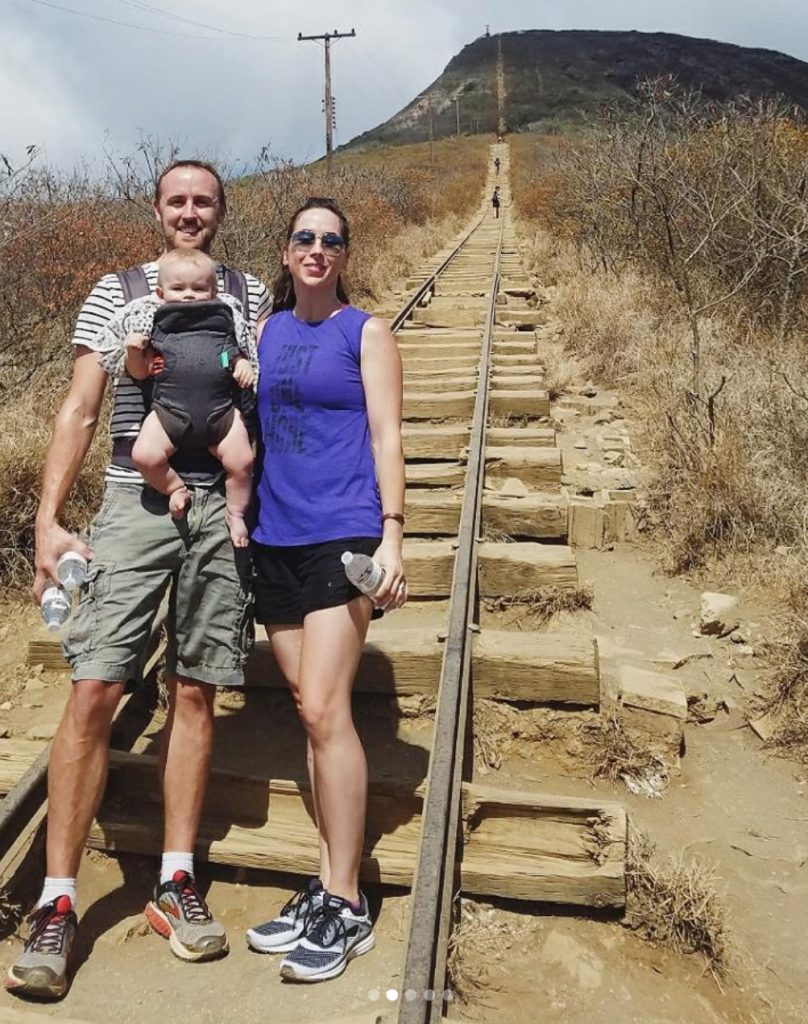 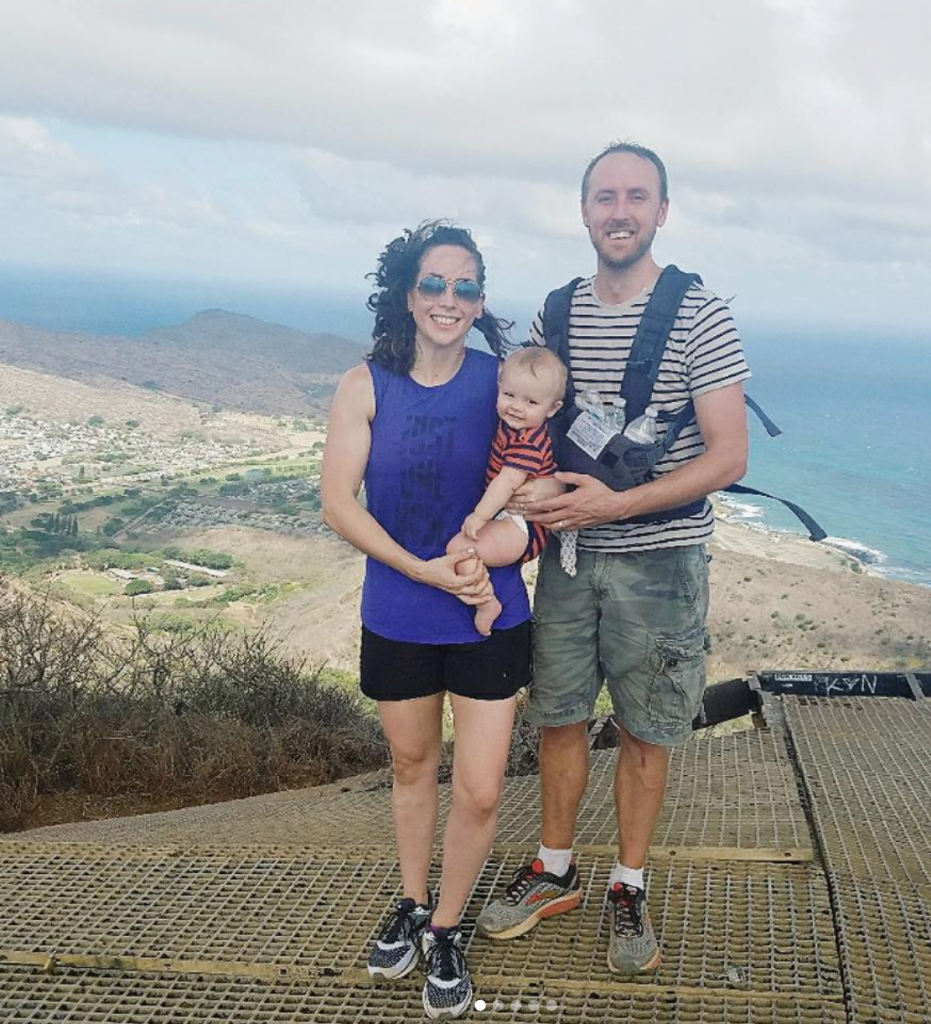 Those big smiles are on our faces in the first pic were because we didn’t know (well, Shaun had done it before but not with a baby on board). The second pic smiles are because we’re still alive.

But seriously. I am not in bad shape, y’all. And it still was a tough hike. And Shaun did it while WEARING Honor, so he took the whole Real Men Wear Babies trend to the next level.

After that (tortuous, yet strangely satisfying) experience, a shave ice was feeling pretty necessary, so we headed to Uncle Clay’s House of Pure Aloha, where Uncle Clay himself regaled me with stories of how he used to frequent his own store when it was a sweet shop decades before and long for the day he would buy it and be in charge of handing out cups of sugary goodness. See? Dreams do come true! He was a sweet guy. Plus, he told me I looked like Elizabeth Taylor, and I’m all about a fancy sno-cone with a side of flattery.

The next day, our hiking trend continued as we tackled the (much easier but considerably windier) Makapu’u Point Lighthouse trail. 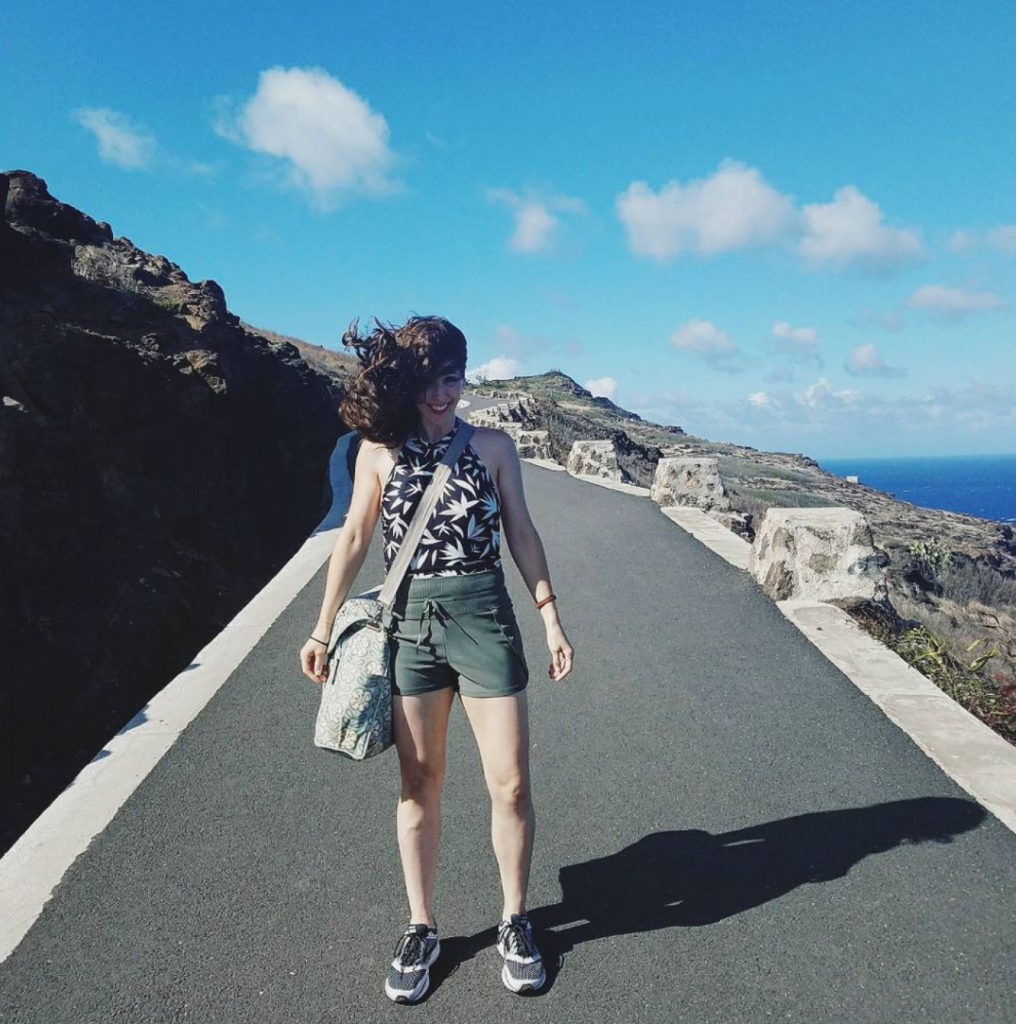 See? Gusty? I don’t recommend hiking in a bathing suit, by the way, unless you’re doing what I mention below.

The views were spectacular, but even better was when we picked our way down to the tide pools halfway back down the trail and got sprayed by giant geysers of water from the blow-holes. 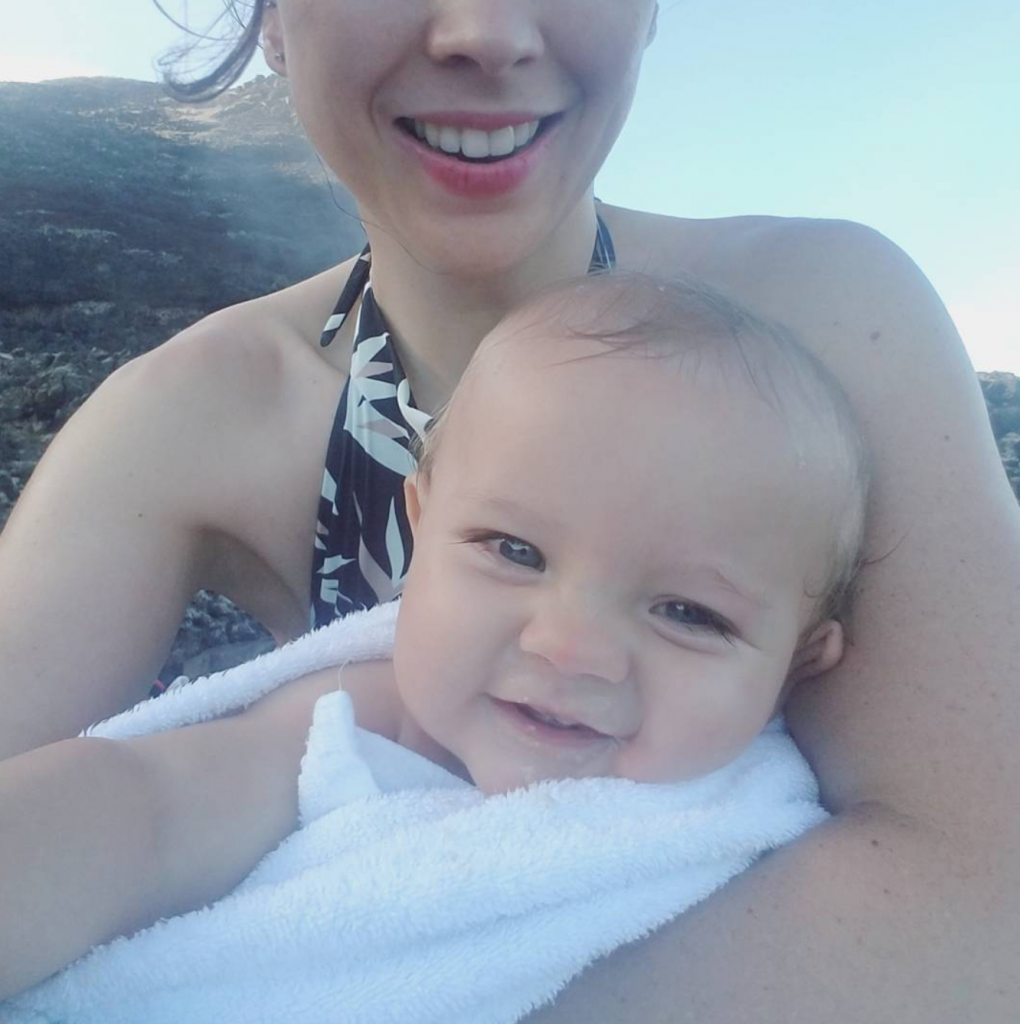 Daddy’s swimming in the tide pools while Honor and I got our selfie on.

Of course, then came the moment in the hotel parking garage when Shaun discovered that his wallet was missing. We couldn’t find it anywhere in the car, and he ended up hightailing it BACK to the hike, doing half of it in the now near-darkness and then the rather precarious goat path down to the tide pools in the then pitch blackness. Couple that with the fact that his phone wasn’t charged, and I was a rather concerned and uptight wife for a good two hours.

As you can imagine, when he came back without the wallet, we were both totally bummed.

AND THEN, we discovered it in a shopping bag…which he finally remembered shoving it into before we started the hike so the exact scenario of losing his wallet in a tide pool did not come to pass. Grrrr…all’s well that ends well?? Yes? Yes.

Friday was my actual birthday, and we started with a delicious breakfast at Sweet E’s Cafe. Honor and I had eaten there another morning when Shaun was working, and I told him we had to go back so he could try the blueberry cream cheese stuffed French toast. Holy exploding taste buds. I usually like the concept of French toast more than its execution, but this stuff was AH-mazing.

After that, we brought Honor back to the hotel where a sweet girl we had hired from an agency local to Honolulu babysat him while we took a surfing lesson. Shaun had taken one once before on his previous trip to Honolulu, but I never had. It was fun, and I did manage to stand up on the board several times, but the ABSOLUTE best wave that went on forever (and happened to be at the tale end of our time…so no chance for repeats) ended up coinciding with water smacking me straight in the eye and knocking my contact loose. So, I spent the entire wave crouching on my board trying to get the ornery thing back in my eye.

Eh. Worse things have happened to me.

Okay, that’s being a bit dramatic. But I guess I should have known when my masseuse asked, “You ever have Thai massage before?” and then just grunted dubiously when I said, “No,” that I was in for an interesting experience.

Hilariously, Shaun came along for a couple’s massage (his first massage EVER), so he was even more bewildered than I was when we left.

So, basically Thai massage involves a WHOLE lot of having elbows dug into your back muscles, being walked on, and being pulled into some of the most unappealing positions ever. All by tiny Thai women who weigh maaaabye 90 pounds soaking wet.

Which makes you feel like EVEN more of a wimp when they say, “Pressure okay?” and you’re like, “Um, it’s a littlemuch” (and by that, I mean, the imprint of you fingers will never leave my collar bone), and they respond with, “Oh, okay. But this light. You need toughen up!”

I think maybe in the future I will avoid massages that get me thinking things like: “It’s like labor, Abbie. The pain can’t last forever. Just breathe, and the worst will be over in a minute.”

ANYhoo, we continued the festivities with lunch…somewhere…and a nap. And then we got all gussied up for our dinner reservation…

But Honor was having none of it.

He had been SO good this whole trip. Chill and cheerful and easygoing. But that night, he was H-Y-P-E-R.

We stuck him in the stroller and walked for a good long while, but he absolutely refused to fall asleep and kept emitting random, excited whoops and squeaks. Our reservation wasn’t for a fancy place, particularly, but neither was it a place where you would bring a vocalizing baby just for “fun.” 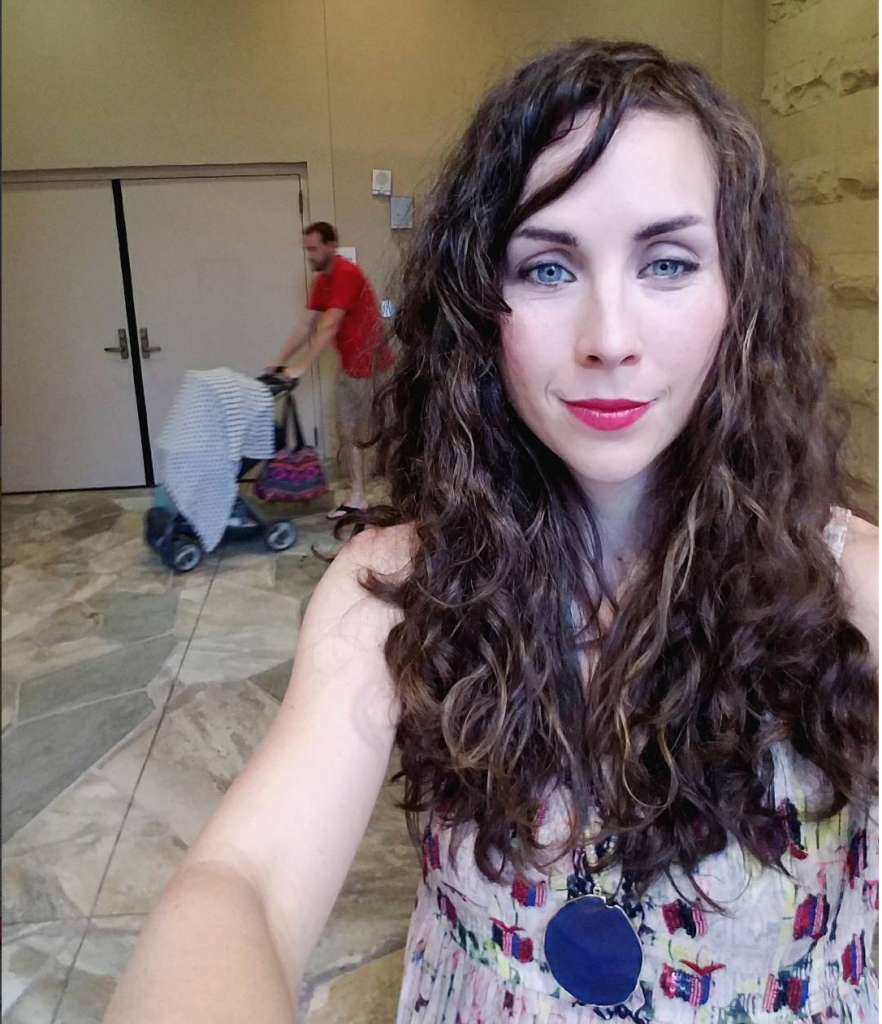 We aaaaalllmost won a few times, but the minute he got drowsy, he popped right back up.

So, we gave up and headed to a nearby Vietnamese/Thai/African (random, yes?) place.

It was SO good. I’ve racked my brain and can’t remember the name of the restaurant for the life of me, but the atmosphere was cozy and romantic and the food delicious. Plus–bonus!–the seating on one side was bench style, which gave Honor plenty of room to crawl out some of his excess energy.

We capped off the night with fireworks on the beach. I’d love to claim they did it just for my birthday, but the Hilton does a fireworks show every Friday night, so it was just really good planning on my part having my birthday fall on a Friday this year. Or…something like that.

Saturday was our last day there, and we squeezed in one more hike–to Diamond Head this time. Which was…overrated. Except for the parking experience, which was both slightly maddening–we ended up in the waiting line for quite a while because the lot was full…which should have been our first clue–and diverting. The guy in charge of the lot was wearing a yellow face mask with holes cut out for his eyes and mouth, a giant straw hat, and gloves. Plus he was SUPER zealous about his job of getting people into parking spots as they opened up and shutting down any attempts at line-cutting, which made for some pretty entertaining shouting and pointing showdowns.

ANYhoo, after idling in line for 25 minutes, The Man in the Mask finally gestured us into a spot, and we began the climb. Along with about 4,567 other geniuses who thought it would be a good idea to hike Diamond Head on a bright, sunny Saturday.

The views at the top were pretty, but hard to enjoy, since there were 14 people eagerly awaiting the chance to claim your spot at the railing. Eh. It wasn’t my favorite experience all around, but it was still an experience, and I don’t think I’ll soon forget weaving like mad through crowded paths in an attempt to keep the hike to a respectable time (we wanted to get up and back in under 45 minutes…just because).

The rest of the day was spent souvenir shopping (at, ahem, Walmart) for the kids, driving to a scenic view (which was completely obscured by fog) and trying some local poke (didn’t love it, didn’t hate it) and yet another shave ice before heading to the airport.

The flight home was the most daunting to me because it was an all-nighter, and Honor had been so full of nervous energy on the flight over, I figured he wouldn’t easily go to sleep. Plus, we didn’t have the extra space for his car seat this time.

Sure enough, he put up a valiant effort to stay awake for close to 3 hours, but he finally couldn’t keep his eyes open any longer and slept for a good two hours. Shaun and I dozed fitfully, but at least the flight back was a full hour shorter than the one there, and it went by somewhat quickly.

By the time we touched back down in Dallas, we were feeling pretty bleary-eyed but happy to be home and SO ready to see the rest of the kids.

Pretty much every aspect of the trip exceeded any expectations (they were few) that I had, and I came back feeling a strange mixture of exhaustion and rejuvenation.

Best of all, the kids thought their Hawaii Walmart shirts were A M A Z I N G. Well, those and the chocolate covered macadamias, of course. 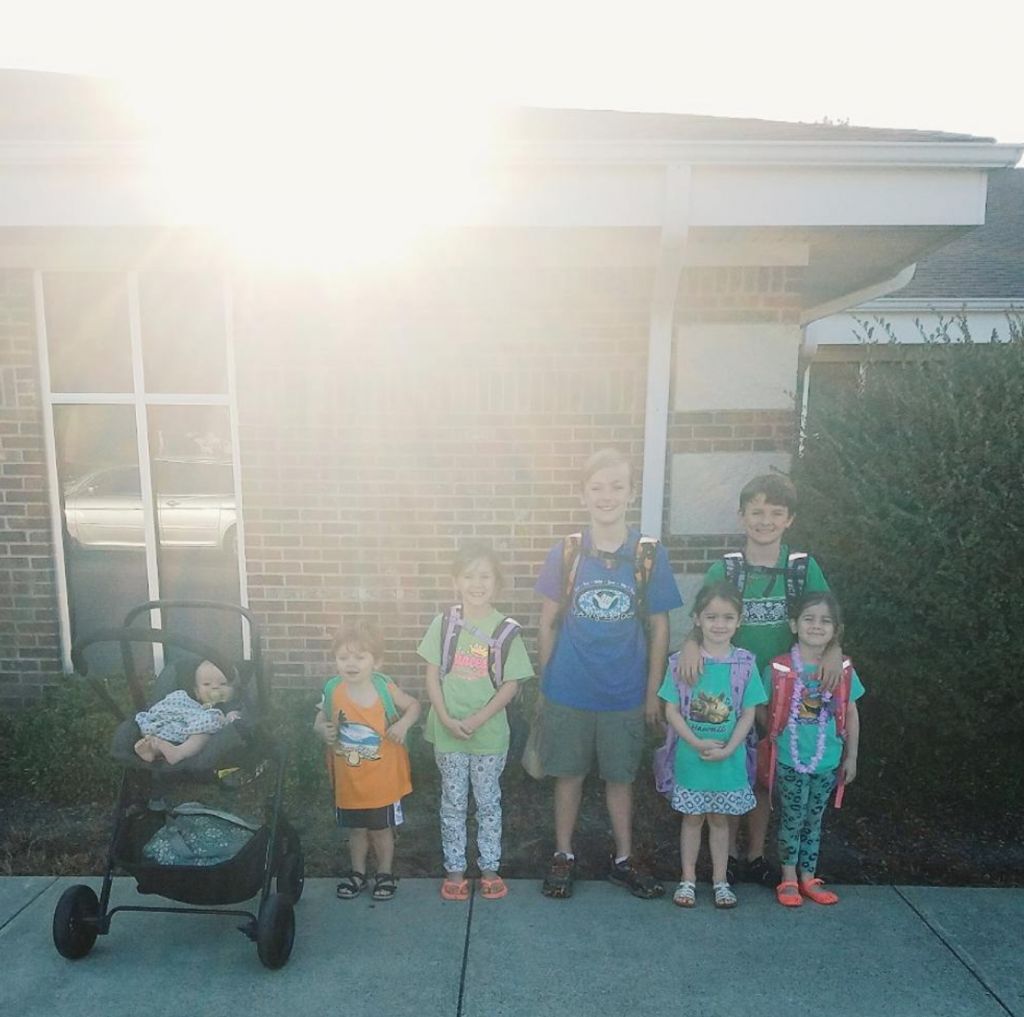 Of course we proudly wore our shirts to homeschool co-op THE DAY AFTER we got back.

Stay tuned for the first installment of my yearly Amazon Gift Guide on Tuesdays (pinky promise).