This past month has been one of the busiest and most exciting in a while. And that’s saying something coming from a woman who has spent the last year birthing her 7th baby, packing up and selling her beloved DIY home, then moving into her 2nd DIY home and living the last 5 months in a constantly evolving (code for: under construction) space.

But! None of that can quite trump the triple-threat that was traveling the first week in October, only to have Shaun leave on a work trip the very next morning after we got back, and then turning around and heading out on yet another trip just two days later. We’ve been home for a week now, but it doesn’t really feel like it. My days are all starting to blur together. Well, I don’t know about “starting.” That was a while ago. But continuing in an even more dizzying fashion. I’m ready for a dose of quiet and normal…says the girl who has 2 children with birthdays in November plus Thanksgiving, Christmas, and another 2 birthdays right around the corner. Yep. Quiet and normal should be exactly what it looks like around here. Heh.

ANYWAY, back to the travel. Do y’all remember back in the spring when everything was even more cray-cray than usual, and Shaun ended up with a work trip to Hawaii smack in the middle of our mad dash to get the house ready to sell? I remember.

He told me I was welcome to come with him, encouraged me to, even, but I just couldn’t wrap my brain around relaxing in Hawaii while there was so much work to be done at home. So, I passed. And I didn’t regret it…mostly.

So, imagine my delight when ANOTHER Hawaii work trip appeared on the radar. And my nice mama agreed to keep the oldest 6 kids. Shaun’s work trips are usually a bit up in the air for a pretty good period of time. Until they aren’t. Clients have been known to hem and haw about dates for a good four months and then suddenly need him out there in 2 weeks time. So, I wasn’t sure I’d be able to go on this one either, depending on the timing.

Wouldn’t you know it, though, Honor and I not only got to go, but Shaun managed to schedule the trip for the week of my 35th birthday! I spent my birthday surfing and getting the most excruciating massage of my life. But more on that later.

I mentioned a while back that Hawaii isn’t really my jam, which, I realize, sounds nuts since it’s plenty of folks’ dream vacation. But Shaun, Della (at 2 months), and I went to Kauai years ago, and, while I enjoyed it, it didn’t blow me away.

Well, low expectations are a beautiful thing, let me tell you. I went into this trip thinking that it would be a welcome break from our construction zone of a home and looking forward to spending time with my husband not hashing out which stair railing to choose or whether or not we had actually ordered the knobs we couldn’t find for the upstairs doors but having pretty much zero other expectations. And you know what? I had an absolute blast.

First things first and what all the mamas want to know: how did Honor do on the flights? Pretty darn well. He’s a chill baby. His favorite pursuits are eating, smiling, and sleeping. So, I wasn’t too nervous, even though it was fully an 8 hour flight on the way there. I had my arsenal of tricks all ready and raring. And let me tell you: I used every one. The thing I had not anticipated is how HYPER my usually laidback baby would become upon entering a confined space full of strangers. 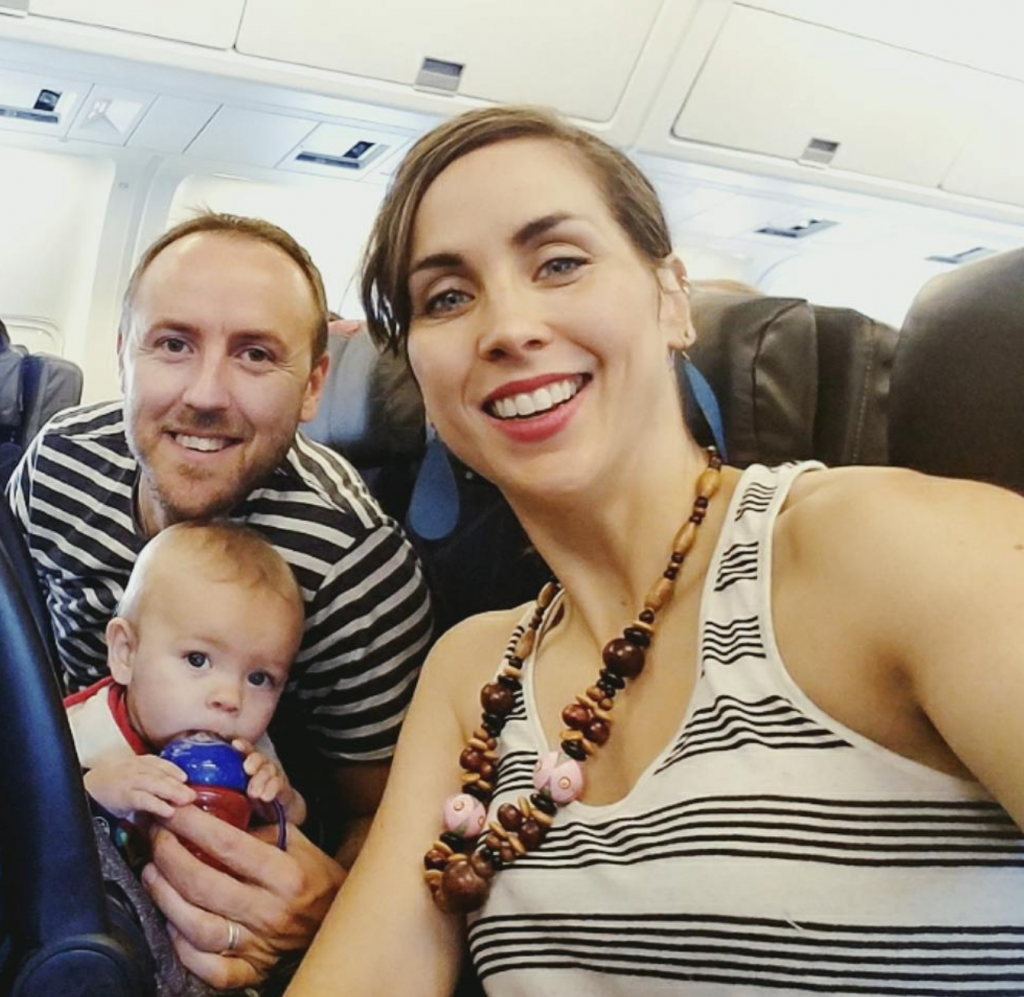 Do not be fooled by his calm expression. This kid was FULL of energy.

He fought sleep like it was a Nazgul intent on sucking the soul from his body.

But with Shaun’s and my tag-teaming it, we prevailed. Huzzah! And Hooray, God! Because, on the way there, we ended up getting an “extra” seat, which means they allowed us to bring Honor’s car seat on, which was awesome the two times we managed to wear him down enough to take a cat nap (him, not us…zzzzzzz). The lady checking for open seats was flabbergasted one was available, since it was supposed to be a packed flight with multiple standbys. She looked very confused as she told us that they had already settled everybody in the standby line, and the seat was ours but then responded to my, “Hallelujah! Praise Jesus!” with a big smile and an, “Amen.”

Once in Hawaii, we scouted out some grub pretty much the second we exited the airport. Newsflash: this will not be the post where I tell you all of the best Poke Bowl joints in Honolulu. As a general rule, I prefer to eat the authentic food of the place I’m visiting. But as another general rule, I do not care for raw fish. I did try it. But it did not wow me.

So, we settled on Thai food (it was pretty decent, especially for hungry folks fresh off a plane), then checked into our hotel, which was right across from Waikiki beach. Normally, we would have scouted out an Airbnb, but since Shaun’s work was paying for the nights when he was on the job, we decided to stick with a traditional hotel. And I’m glad we did. It just made things so much more relaxing to not have to worry about laundry and cleaning up after ourselves for once. 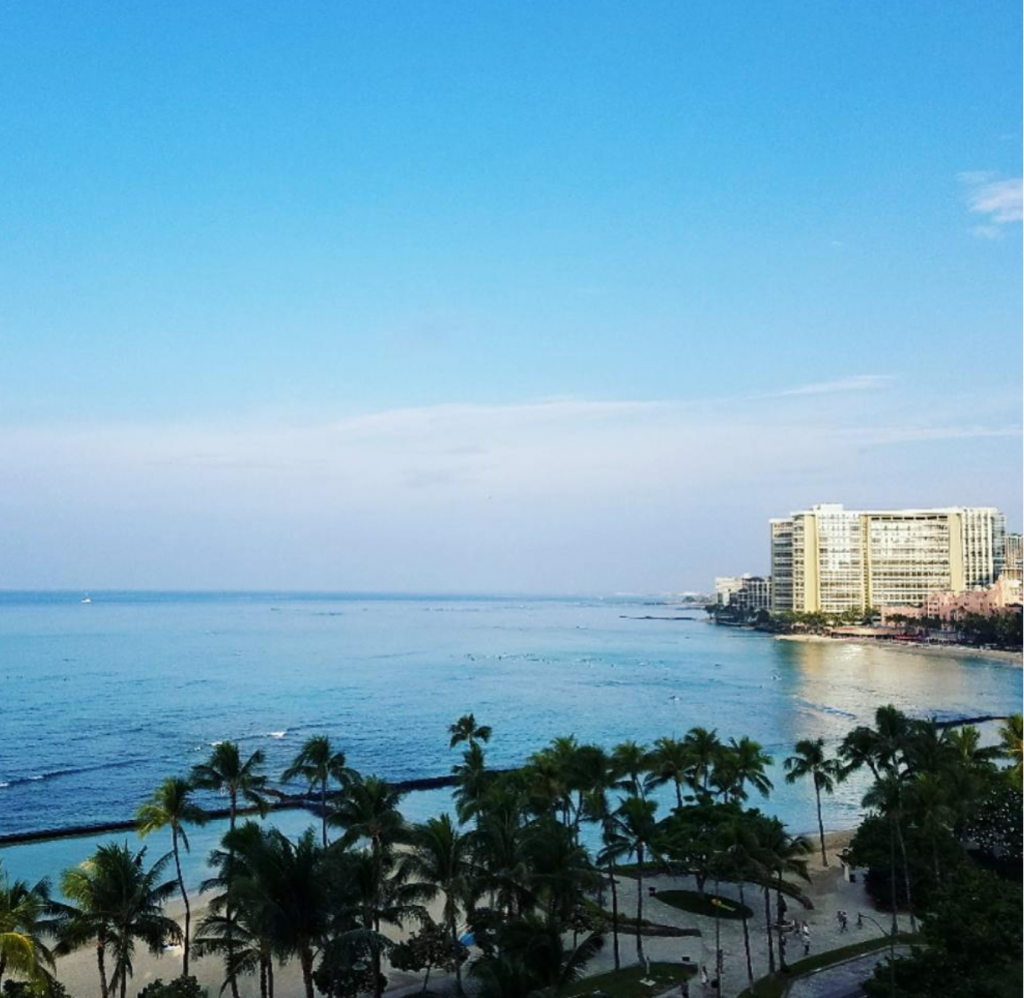 The view from our hotel was not terrible

That night, we ventured for a quick walk on the beach and a longer stroll down the main thoroughfare where I was overwhelmed by the sheer number of ABC stores. If you’ve ever been to Honolulu, you’re nodding your head right now. ABC is a chain of convenience stores, and there is literally (and no, I’m not misusing that word right now) one every fifty feet. It’s bizarre to me that any population could sustain them all, but they were always buzzing with business whenever we ducked in for some necessary small thing.

We ended the night bringing a burger (which I highly recommend) from the Hideout at the Laylow back to the hotel and putting Honor down while we propped our eyelids open long enough to make it to a respectable bedtime. (Honolulu is five hours behind Texas).

Shaun didn’t have to be at work until Tuesday, so since we’d gotten in on Sunday afternoon, we had all of Monday to explore. We  yeah right…we were up and at ’em by 6, thanks to Honor’s extremely confused body clock, but first dibs at our hotel’s custom omelet bar aaaaaalmost made up for it. Plus, Honor needed a nap like an hour later, so we got in a bit more shuteye after all.

The rest of the day was spent driving around the north end of the island…while it rained. Which sounds like a bummer. But it really wasn’t. We didn’t have a single thing we HAD to do, so instead, we wandered, taking breaks when we felt like it, trying out Korean barbecue (I’m a fan!), and doing a lot of talking and breathing. I can’t remember for the life of me what we had for dinner, but, since this isn’t strictly a guide to things to do and places to eat in Honolulu (and by “isn’t strictly,” I mean really not at all), I’m not going to stress about it.

Tuesday, Shaun had to work, so after our early morning omelets (yes, again), Honor and I headed back to the hotel room where we both napped (ah, the blissful, guiltless sleep of really, truly having nothing else you should be doing) and then headed out to explore. We spent the afternoon walking and eating and browsing the Anthropologie sale racks (confession: I bought a bathing suit on major clearance and don’t feel one bit of shame, since I immediately wore it multiple times throughout the rest of trip). At one point, Honor was a bit out of his mind with tiredness, so I plunked him in the stroller, plugged in my Audible book, and proceeded to walk for the next hour. 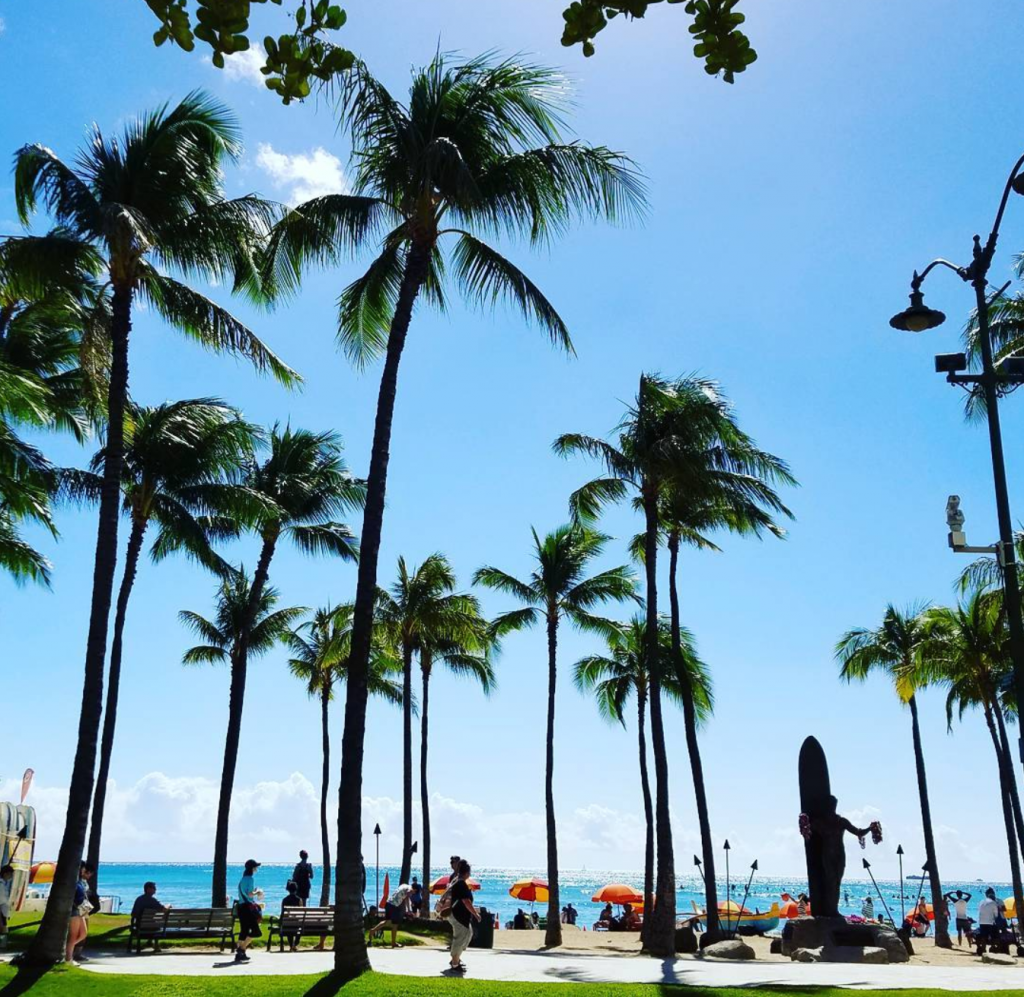 The views on our walk were not awful either. Come to think of it, there weren’t too many bad views. 😉

The weather was perfection, with a bright smiling sun, breezy blue skies, and the tang of saltwater in the air. I could feel some of the tension that I’ve been carrying with me constantly for months starting to uncoil from my spine. Honor and I ended the afternoon chilling (literally) in the hotel pool until Shaun came home. I’m not really a pool girl, but that baby needed something that wasn’t sitting in a stroller to do once he woke up. And he is a w a t e r b u g. 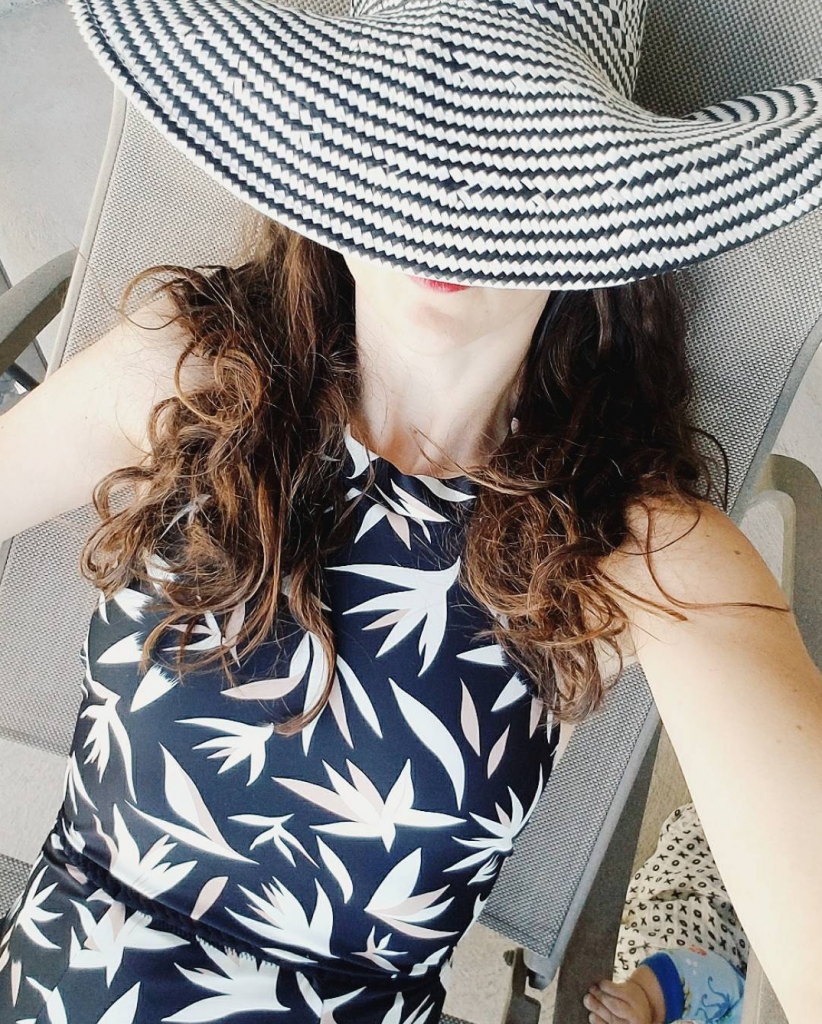 This shot is from our balcony patio, not the pool. But yay for clearance Anthro bathing suits and cute little pool mates.

Again with the dinner amnesia. I had intended to be more, um, intentional about cataloging our watering holes so that I could be a font of info for anyone planning to take a trip. But I had also intended to type this post up about 57 times over the last 2 weeks, so intentions clearly have little bearing on this situation. ANYhoo. We ate. It was probably pretty good. And then we went to bed.

It may sound kind of lame given the location, but one of the best parts of the trip was the complete and total lack of agenda. We are not obsessive schedulers, but we do tend to plan ahead a fair bit. This time, although we did have specific activities in mind, we put zero pressure on ourselves to accomplish them. And some of my favorite parts of the first part of the trip were spending evenings in the hotel snuggled up in bed in the dark with Shaun (because Honor was in a pack ‘n play in the same room), talking or watching episodes of Shark Tank or Chopped. 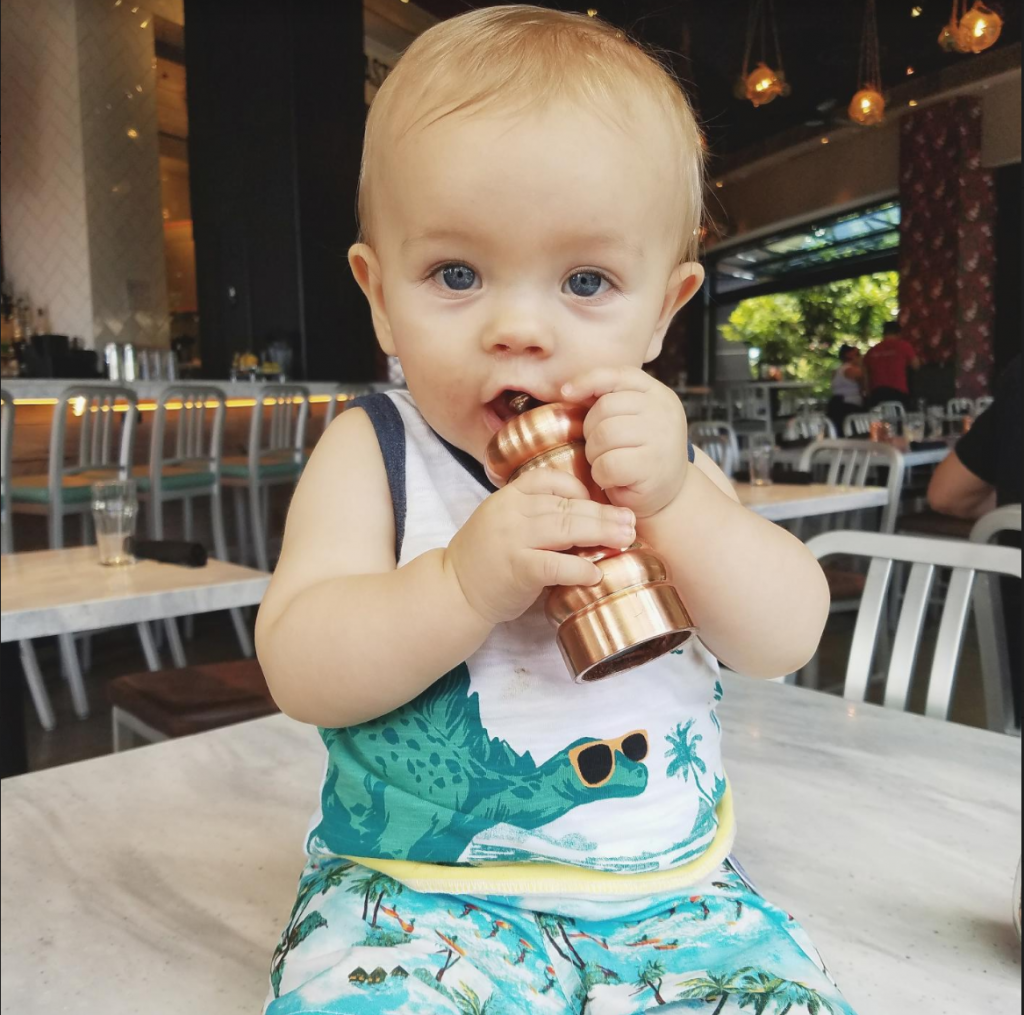 By Wednesday, though, we were rested and raring for something more active…but you’ll have to wait for just what that was until next time because I’ve recently switched to teaching early morning Body Pump classes, and my body has not adjusted yet, and I’m getting very sleevnb,mns