Question for the ages: Why, oh WHY, are men so hard to buy for?

Answer: 1. Because if they want it, they go ahead and get it for themselves without ever dropping any hints or creating an Amazon wish list or ANYTHING, and 2. Because most don’t like clothes and jewelry (unlike we easy-to-please, shallow women). 3. Because they like tools. Specific tools. Like with exact serial numbers and stuff (ask me how I know). Grrr….

Now, that I’ve demystified that for us all (thanks, Abbie), I’m here to tell you that, difficult to buy for though they may be, men are not impossible to find the perfect gift for. 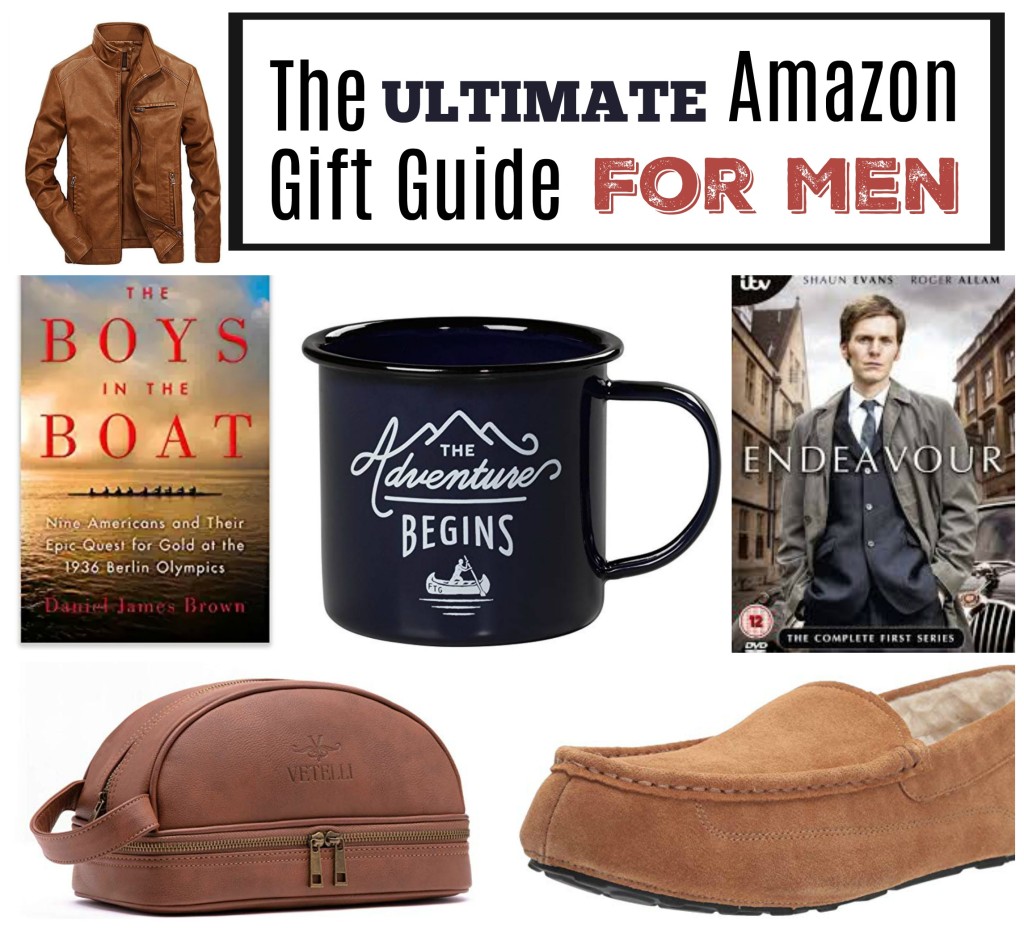 In FACT, I (think I) managed to score the perfect gift for Shaun this year without his having a clue that I remembered his mentioning it. Woot!

That gift is not listed below (because, somehow I doubt that most of your males-in-need-of-gifts want an inversion table), but I’ve got you set with lots of great, practical, fool-proof options–many of which I’ve gifted Shaun over the years and which are still in use!

I hope at least a few of these strike the right chord for the men in your lives.

I’ve been wanting to listen to this highly lauded historical account of a crew rowing team who raced for gold in the 1936 Berlin Olympics and challenged much more than a speed record at the time (think Hitler controlled Germany and all that that entails). I haven’t found the time yet, but the more I read about it, the more I think I will love it, especially since it’s often been compared to Unbroken, which I found mesmerizing (and would highly recommend if your man hasn’t read it). And if I’m intrigued by the topic, I guarantee plenty of men will be too.

This camping mug is manly, stylish, and sturdy. Need I say more?

Ditto for this metal thermos, which has a great reviews and a strong, standout logo.

And then there’s this Bush Craft book, which has 1,500 4 1/2+ star reviews. Apparently, it teaches you everything you need to survive in the wild. Manly, much?

Shaun travels a fair bit for work, so he was thrilled when I replaced his worn out mesh toiletry bag with a sturdy leather one for Christmas one year.

This one is a bit different than the one I bought, but it would definitely do the trick.

I’m loving the concept of this leather mouse pad, both for its sleek minimalist good looks, and for the padded wrist-rest.

I have become a bit of tennis shoe snob. I strongly suspect that I suffered a stress fracture in my right foot when I was pregnant with the twins, and I blame it on a tendency to be cheap with my workout footwear. Ever since, I’ve been willing to “splurge” a little on workout shoes, which totally makes sense for me since I’m a fitness instructor and they are part of what makes me able to do my job well (not to mention a tax write-off). In my mission to find the cushiest, best shoe, I discovered Brooks…and have never looked back. Now, Shaun is not a big exerciser, but he still appreciates a comfortable shoe. So, when I bought him his first set of Brooks for his birthday last year, I was a bit gratified at his expression of disbelieving ecstasy. “They really ARE better!” he said. “It’s like walking on CLOUDS,” he said. And I just smirked.

P.S. Lots of size/color/price options here, but $75 is about as low as most styles ever go, so this particular shoe is a bargain.

With a husband who builds houses, good work gloves are a must. And this leather pair has great reviews for comfort and durability.

Got a retro kind of guy in your life? Then this handsome Crosley record player just might be the thing. I’ve tried to justify buying this for Shaun in my head, but I know it would actually be for me.

One thing Shaun is never without? A quality set of noise-canceling earbuds. If he’s working on a project or mowing the lawn, he always has an audio book book in his ears. Chances are, you’ve got a guy in your life who could use these.

Okay, this one’s a long shot, since everybody’s tastes in scent are different. But I bought this for Shaun over 15 years ago, and it’s all he’s worn since. It has such a warm, spicy-without-being-overpowering fragrance that I think would work well for lots of folks. He doesn’t wear it every day, but he knows I’m guaranteed to notice (and give him extra snuggles) every time he does. Come to think of it, why doesn’t he wear it every day??! (Funny story: when one of his bottles ran out, I found a bottle for cheap at Marshall’s without realizing it was the exact same thing that he had always worn and bought it, thinking that it seemed familiar. Turns out, I know what I like because it really was the exact same thing).

Another of Shaun’s favorite gifts he’s gotten from me are these Reef Smoothy flip-flops. I had a pair myself years ago (not sure why I never replaced them because they were great), so I can testify to how cushy and smooth the foot bed is.

These Reef Leather Smoothy’s have the same comfort level with a more stylish twist. (And, yes, Shaun owns these too).

I just bought this book at Marshall’s the other day. It’s basically a guide to cool, hidden finds in various locales around the world and makes for a fascinating read (from what I’ve seen so far). Would be great for a traveling man in your life.

Last year, I recommended Foyle’s War as a manly period drama/series, and this year, I’m throwing Endeavour out there in case you’ve got a mystery-loving man in your life. It’s not as clean, content-wise (most episodes are, but some have more “sensual themes,” even though this is not a show with anything explicit like nudity or sex scenes). On the whole, though, the entire series is smart, moody, well-acted, and engaging. When I asked Shaun which of our favorite British crime drama series (they’re pretty much the only thing we watch) he would recommend after Foyle’s War, he said this one, so I’m going with it.

It sure isn’t an alluring gift, but I will say that Shaun has used the tar (maybe not the right word choice for this particular gift) out of the electric toothbrush I bought him a couple of years ago.  His is a Philips Sonicare, but this cheaper option still has great reviews.

This Under Armour Fleece Sweatshirt is a pretty decent price for a high quality, brand name athletic sweatshirt with awesome reviews. Just saying.

Anybody else have men in their lives who insist on wearing “show” socks with shoes that they shouldn’t? Then, these no-show versions would make a great not-so-subtle hint of a stocking-stuffer.

Is there anything better than cozy flannel pants? Fine. I know the answer is yes. But they’re still pretty great, right? These have good reviews and come in a variety of patterns.

And while you’re outfitting him with comfy sweatshirts and pants, you might as well give him something soft to put on his feet too.

It wouldn’t be a gift guide for men without a good multi-tool option. I’ve gifted Shaun with various versions of these over the last 15 years, and he has always used them a ton and been excited to explore their various gadgets and gizmos.

I am so tempted to get this jacket for Shaun, even though he already has a real leather version he wears often. The reviews say the “leather” is well-made and authentic-looking and the fit is excellent (if anything, it runs a tad small, so size up if in doubt).

This canvas + leather duffle has tons of compartments and great reviews for style/durability. Plus! An optional long strap for different carry options.

I bought Shaun this “bib” last Christmas, and he faithfully uses it each time he trims his beard. It’s nothing so very fancy, but it certainly helps with clean-up after and stores easily.

And with what does Shaun trim this beard of his while wearing a bib? 😉 Something very similar to this puppy. Which! Comes with a boatload of options for trimmer lengths.

Got a guy who loves to hit the gym? Or swim? This bag has great reviews for durability and the inclusion of both a shoe compartment and a wet bag for sweaty clothes or damp swimsuits.

I don’t love most baseball caps, but this one has a stylish vibe while still maintaining its man card status.

And there you have it! As always, be sure to check out last year’s guide, which still has tons of great, available options!