Since images almost always trump words, I will treat you first to my summertime collage for this week, which I am linking up with Amber of Starfish in her series:

This week, it’s mostly about the boys, but the “gilr” (yes, I just saw that typo on the bottom pic…argh!) does put in some appearances. How could she not, ridiculouslycutegiganticbookreadingthangthatsheis?! 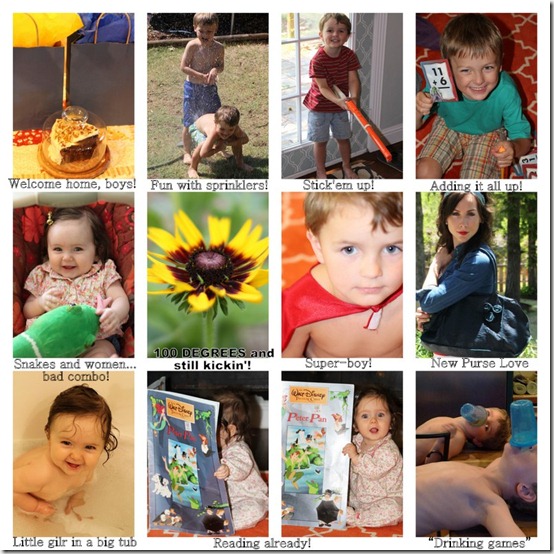 And now for today’s Picky Flick: The Greatest Game Ever Played 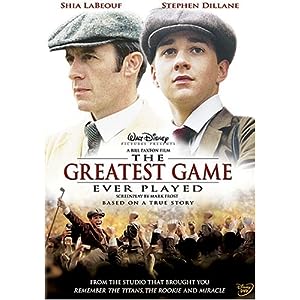 Trivia tidbit courtesy of www.imdb.com: the producers of the film changed the color of the golf club-house where they filmed in Quebec from white to yellow, and the club members ended up liking it so much that they never painted it back.

Believe it or not, The Greatest Game Ever Played refers to…golf. {Feel free to take a moment to yourself for a derisive chuckle…I’ll wait…all better now? Let’s proceed}.

Now, I’m aware that my reader-base is mostly female, so I also realize that I may be committing blog-suicide by recommending a sports movie, but, in honor of the 30 Day Husband Encouragement Challenge that I mentioned here (some of you are already doing it with me; if you’re not yet, feel free to jump in anytime!), I thought I’d hype a flick that your husbands can dig too.

So, this weekend, when your honey says, “You wanna watch something, babe?” take a deep breath (it’s a long title) and spit this one out.  Now, what you don’t have to mention is that this movie is just as much about family dynamics, personal integrity, and cute, early-20th-century golfing duds–with a dash of romance thrown in for good measure—as it is about the actual sport (cough, cough) of golf.

Seriously, I was so pleasantly surprised by how much I liked this movie that I grabbed my little boys a few months later and watched it again.

It may technically be about golf (which I clearly don’t love), but I’ll watch a movie about curling if it’s well-acted, witty, and populated with engaging characters—all of which are true for The Greatest Game Ever Played.  The fact that it’s based on a true story (although I know that doesn’t necessarily mean much) and features not one but two underdogs is just a bonus.

Give it a chance…even if it’s just so you can have enough leverage to get your hubby to watch Steel Magnolias (again) next week.

Can’t find it to rent? Click below to order a hard copy from Amazon.