Whew! This week has zipped by, and I feel like I should be patting my pockets looking for where those extra minutes I thought I had lying around went.  So, what better way to start off a (hopefully more) relaxing weekend than with a great movie?

Especially one that’s not in English.

Man, I really gotta work on my lead-ins.  I’m pretty sure I lost half of you with that last sentence.  But I felt, in the interest of FULL disclosure, that I should point out early that Mostly Martha is a foreign film.

Now, I know not everyone is into subtitles, but I’m begging you—for the love wiener schnitzel—give this one a chance.  It has everything a relaxing movie should have: romance, drama, redemption, stomach-rumbling-good food, and a (very) happy ending set in the sun-drenched Italian countryside. 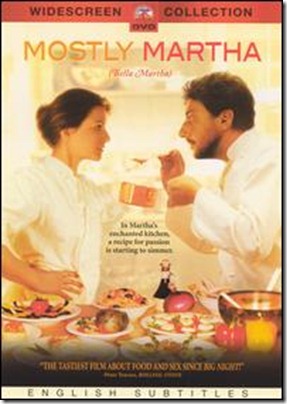 Sidenote: Mostly Martha has fantastic music (click here to hear/watch a live version of Paolo Conte’s irresistibly catchy Via Con Me), but there’s no official soundtrack (not for lack of people asking either), so my husband found all the individual songs and compiled a custom soundtrack for me (complete with cd art) that we listen to when we cook together (Why only cooking? I guess we were inspired by the movie, but it really does make the perfect background for easy-going productivity).  Amazing much? Yeah, he is (*sigh*).

Mostly Martha’s eponymous protagonist is a control-freak German chef who has and needs nothing in her life but her beloved kitchen until her sister dies, leaving her taciturn eight-year-old, Lina, in Martha’s decidedly non-kid-friendly care. It’s hard to imagine a more single-minded or stubborn individual than Martha, but Lina matches her aunt’s headstrong tendencies with a determination of her own fueled by the grief of her mother’s loss, and it seems unlikely that she and Martha will ever connect. That is, until Mario, a good-natured Italian sous chef, comes on board to replace Martha’s ready-to-pop pregnant second-in-command.  He’s everything Martha despises: spontaneous, easygoing, and boisterous.  But he’s also a dang good cook, and he’s the only one who can get Lina to smile or eat even.  Oh, and Martha’s boss has ordered her to therapy after an incident involving a very rare steak and a disgruntled customer and revoked Martha’s kitchen staff veto.  So, Mario stays.  And…well, I bet you can guess the rest.  Still even if Mostly Martha’s trajectory is predictable, the superb acting and unforced chemistry between the leads mark this movie out as something unique.

P.S. If the plot sounds familiar, it’s because Hollywood did an English remake with Catherine Zeta-Jones called No Reservations. I’m not going to comment on that except to say that there’s a reason I chose to feature the German version.

Can’t find it to rent? Click here to get it from Amazon instant video or here to get a hard copy..