There.  See how I did that?

First, a picture to give you an idea of what this Body Combat is of which I speak: 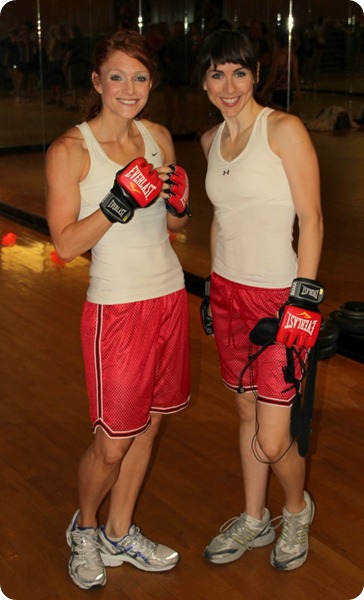 Some people like to sew, cook, read…Mandy and I…we like to dress in matching outfits and punch and kick the air (actually, we like to do all that other stuff too, but a—marginally—good grown-up excuse to wear matchy-matchies with your BFF is fairly rare, so we’ll take it).

But back to that whole “wardrobe malfunction” issue.  No matter how hard you look, you’re not going to find anything amiss with our outfits (unless you have a particular aversion to red mesh shorts and white tops, in which case, I’m afraid we’re at an impasse).

Fortunately, no B.M. (Before Marshall’s) pictures exist because of what I discovered when I walked up behind Mandy during practice the morning of our **launch: red mesh shorts—even the ones with double linings—can be deceptively transparent.

So to Marshall’s we hightailed it, power-walking past the racks of pretty, sparkly, reasonably-priced wares that reached out their hangers to snag our (see-through) shorts and distract us from our mission: finding the most sensible, full-coverage, neutral-toned underoos in the land.

I think the best part about that little excursion was the expression on the cashier’s face when two grown women wearing identical outfits proceeded to buy matching unmentionables (their selection of non-loud options was quite limited).  Come to think of it…there was a staff meeting going on behind the checkout counter..  Maybe the manager was able to use us as a real-life example of team-building and always having each other’s backsides.

So…I SUPPOSE my post title should have been “Wardrobe Malfunction Averted,” but—really—where’s the fun in that?

Anyhoo, let’s get back to the regularly scheduled, non-undergarment-themed program, shall we (why do you look so disappointed)?

**I mentioned the word “launch” earlier, which, simply put,  is the Les Mills’ fitness world’s term for the new release of music/moves that comes out every 3 months—in this case: Body Combat 48 (the # of the release). 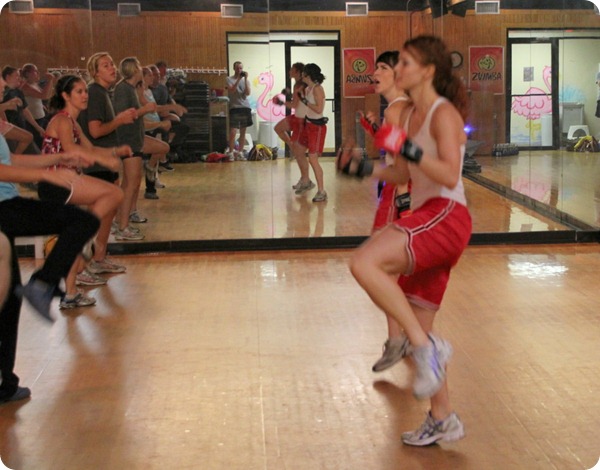 My husband took a break from playing racquetball with his buds in another part of the gym to take some video footage that I planned to show you, but my technological black-thumb struck again apparently because I somehow failed to import the video with the rest of my pics, and then I deleted everything on the card. Of course I did.  (I included a video of the people who really know what they’re doing in my very first Move-it Monday post in case you’re interested).

So, here’s the only “action” shot we got of the entire class.  And, yes, I do look like someone just stomped on my toe, but I think I’m probably yelling something like, “MOOOOVE!” or “MOOOOORE!” Such attractive expressions I make when I motivate people. 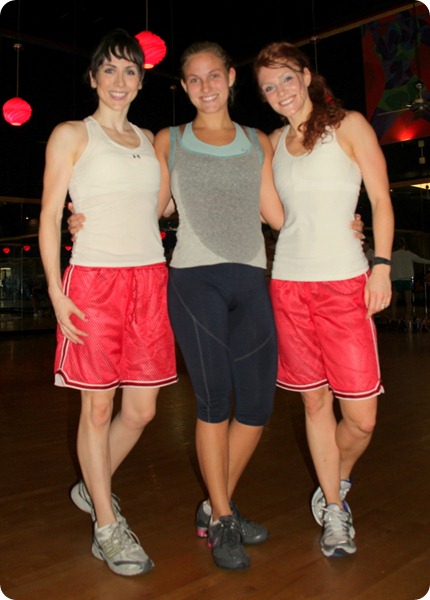 Meet Gena, our #1 Body Combat participant.  She says things like, “I just love this class so much! It just makes me happy!” We totally understand, Gena-girl. Now, if only we could get you to look slightly less smiley and sweet while you pretend to punch somebody’s lights out! (P.S. Although our white shirts hide it well, we were just as soaked in sweat as Gena. It was a gooooood workout!). 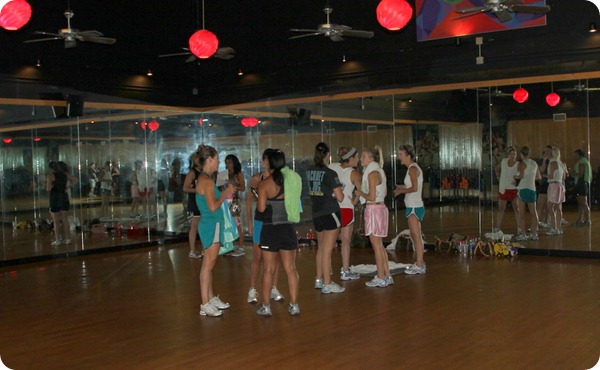 A small knot of our faithfuls hydrating, mopping their brows, and chatting it up after launch (we had about 30 participants, which is pretty much the max that our studio can hold before we use up all the oxygen and start kicking bodies instead of open space). 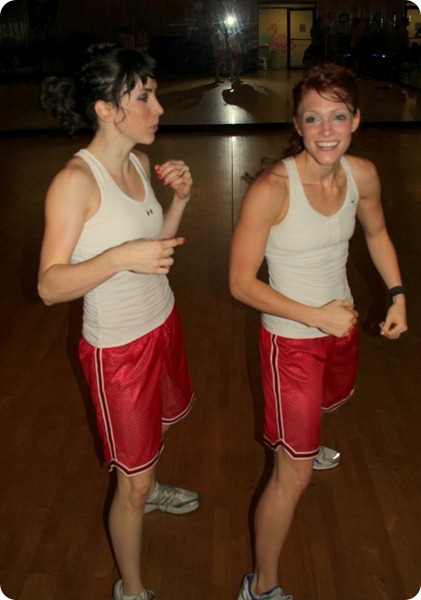 Mandy may try to hurt me for posting this picture (it’s okay, I know pretend karate), but in between all the cheesy, posed shots where we try to look tough, this is really what we look like. 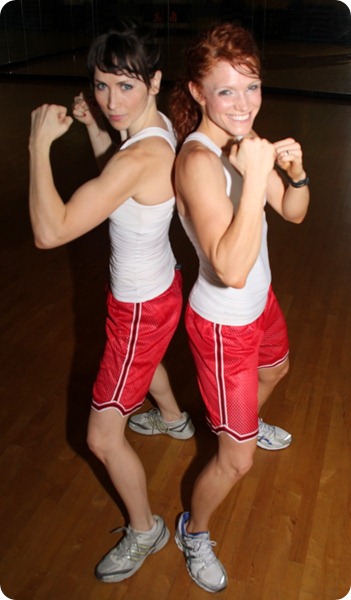 See? Cheesy, posed shot…except I seem to be the only one that got the memo to try to look tough.  Darn your adorableness, Mandy!

And that, my friends, was Body Combat 48!

We kicked.  We hollered.  We perspired profusely. But mostly, we had more fun than two girls with seven children between them (me: 3, her: 4) should be allowed to.

Come to think of it, Body Combat might be the best stress-relief/therapy that a mama with littles could get for the price of a gym membership.

So, does that make me a Body Combat therapist?

Hmmm…why don’t you lie down here on the couch and tell me how that makes you feel?

Oh, and then come back tomorrow for Try-it Tuesday. I’ve cooked up something yummy for you to try!