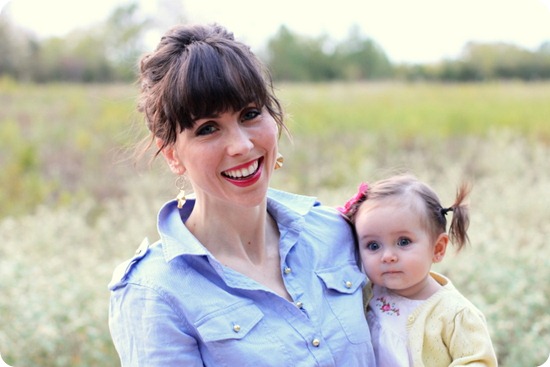 If there were words to accurately describe how much I love my daughter, I would use them. But I’m not sure there are. 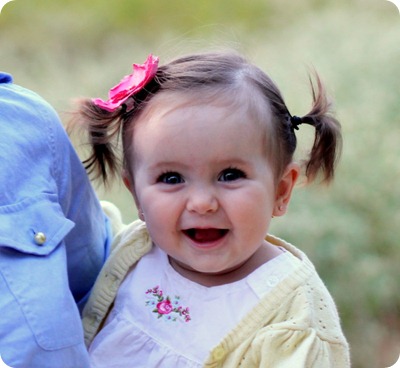 She is everything that is innocence and light to me. If I were to lose her, I don’t think I would ever recover from it (I know that with the Lord’s help, I would at least learn to cope, but I can’t fathom how now). And do you see her adorable piggie-tails (what the boys call them)? What 9-month-old has enough hair for piggie-tails? My Della, that’s who.

But do you know what else? The only reason that Adelaide has piggie-tails or that cute homemade flower in her hair is because she has a mama who adores her.

In fact, you may be thinking, “Well, obviously, Abbie. Who could help but love that sweet munchkin?!”

Well, do you know that, all over the world, there are children—who are just as cute (or at least reasonably close :)) as Adelaide—who are orphans? (I’m being intentionally flippant here since I in no way believe a child’s attractiveness affects his/her worth).

I’m not a super-emotional type, but I would have to have a heart fashioned from bricks for it not to lurch at least a little (in this case, a lot) at the thought of an abandoned, motherless child…

So, about this point, I’m sure many of you are wondering where I’m going with this and why I’m being such a downer on this, the most festive of weekdays. Where’s the TGIF chant, Abbie? I mean, c’mon!

Well, actually, today’s post is the opposite of a downer. Because my feature—Parental Care Ministries—is in the business of giving these orphaned children in Africa hope in the form of meals, beds, a roof over their heads, schooling, and yes, most importantly, love.

If I were to outline all of the details of this ministry, this post would be pages long, but I wanted to tell you just a little more about my connection with them as well as an opportunity you can participate in before I let you go find out more on your own.

I first heard of PCM when Dr. Mark Barret, a member of my home church, spoke one Sunday about how he and his family had come to form this ministry. He was hesitant about it at first, maybe even a bit resistant. But before long, the faith of his daughters and his wife (who had experienced Africa firsthand and was convinced that the Barrets needed to get directly involved) persuaded him, and he found himself sitting around the doctors’ lounge listening to his coworkers talk about their portfolios and investments, knowing full well that he had just sunk a hefty chunk into a new crop of banana plants, which would provide food for orphans. When his fellow physicians asked him how his investments were doing, his answer was, “Well…they’re growing.” (I think I choked/cried/laughed at that one).

Can I just admit something and get it out of the way? I don’t have a heart for Africa. I have nothing against it, but I’m not specifically drawn to it, and sometimes I get a little impatient with what a trendy thing supporting Africa has become. After all, there are other beleaguered places in the world that are just as deserving of attention/aid.

But an abandoned child is an abandoned child, no matter where they live. And the tug on my heart as I listened to the Barrets humbly describe the very practical, non-glamorous (sorry, Bono) steps they were taking in partnership with a Ugandan pastor named Pastor Emmy to support and sustain the lives of a group of orphans and pastor’s children was palpable. I looked at my husband and could tell he felt it too.

That morning, we “adopted” Harriet. I say adopted instead of sponsored because that is what we are doing really. It costs a piddling $35 a month to provide for her basic needs, but the return on that tiny amount is huge. She writes us letters in broken English telling us how much she loves and prays for her Mummy Abbie, her Daddy Shaun, her brothers, Ezra and Simon, and her sister, Adelaide, and I—the non-cryer—well up every time with tears of joy but also shame at my own decadent complacency and lack of thankfulness. I’m doing it now, just thinking about it.

Pastor Emmy was able to come to our city from Uganda recently and tell us a little bit about himself (he was beaten, abused, and mistreated for practically his entire youth, and still his face shone with gratitude) and how he and Supermom (his wife…and an apt title for her for sure) began taking in these orphaned children (I don’t remember exact numbers, but at one point, I think they had something like 35 children in a one bedroom structure), even though they already had several of their own and were far from well-off.

Pastor Emmy and Supermom with just a few of their “children.”

And they just kept on doing it until God crossed their paths with the Barrets, which allowed them to bring in more orphans until…

…they now have about 500 orphans and pastors’ kids who depend on them and PCM for support.

Do you know what these children asked for when PCM told them they could all have something special for Christmas last year?

Oh, Lord, I’m going to get my computer keys soggy.

They could have asked for money or ice cream or new clothes, but instead, they wanted an apple, people! And were excited to get it!!!

So, here’s where you come in. If anything that I’ve written so far has resonated with you at all, please click on the PCM button in the top right corner of my sidebar and do a little bit of reading about their ministry. It’s so simple and so practical. They are being the hands and feet of Jesus and practicing what James 1:27 calls true religion—looking after the orphan and the widow.

Also, keep your eyes and ears open because in November, I will be hosting my biggest giveaway yet (I’ve already got a few sponsors lined up—including one I get to introduce to you on Monday—and am working on a really big project for you guys). This giveaway will also be a fundraiser. It will be free to enter the giveaway, but each dollar donated after that will count as an extra entry, and every one of those dollars will go to PCM, with the goal being $5,000 to buy the bricks for a new classroom to house the growing number of PCM orphans in Uganda.

We already have a promise from an anonymous donator who will match every one of those dollars up to the $5,000. Which means, that we might be able to not only buy thematerials but also get that classroom built!

Now, I know November may seem far away, but my aim is to get as many people on board between now and then to try to make the $5,000 goal a reality.

If you have wares you would like to donate, please contact me via my “Email Abbie” button. And please share this with anyone you feel led to. You will be donating (via a button that leads you to PCM) directly to PCM…just so we get that straight and no one thinks I’m taking your money and going on an extra special shopping spree to Goodwill (okay, kind of funny, but not really).

And I will keep you posted with details as I know more. Until then, please pray that God will bless this effort. And pray for PCM, Pastor Emmy, his family, and the PCM orphans. Sometimes, it’s incredibly overwhelming to consider the poverty and destitution that abound in this fallen world. But instead of sitting on the floor with your head bowed wondering what and why, how about standing up and taking action, even if it’s just by writing a $35 check each month so you too can gain a precious new member in your family?

I hope you have an incredible weekend. We’re planning a road-trip to visit family, and I’ll have some fun pics for you on Move-it Monday.

Oh, and I’d love to know…is there a charity, cause, or ministry that is dear to your heart?