I had about 15 things I could have (and planned to) post about today (though not all at once, of course), but this week has been a bit random already, so I figured I would stick with the (non) theme.

So, here you have it—5 random things from my week, in no particular order:

1) I have eaten a hoagie sandwich just like this one for lunch for 5 days straight (I know the exact number because there were six rolls in the bag, and I ate every one but one). 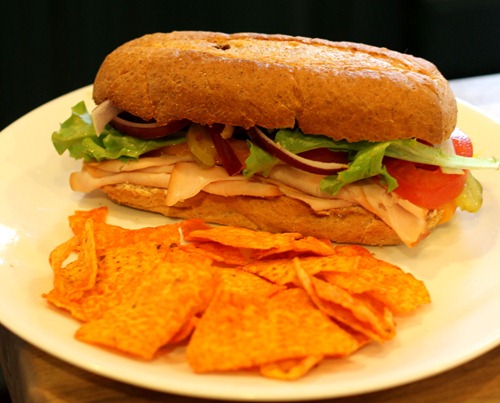 So, what’s my special “recipe?”: Mustard, turkey, cheddar, lettuce, tomato, purple onions, and pickles on a toasted wheat bun (and yes, I was singing that to the “Big Mac tune” while I wrote it).

2) I posted this picture of my husband (one of my faves) on Facebook at the request of some blogging friends (it made sense at the time, I promise), and then one of them told me her 14-year-old daughter came up behind her and said, “Mom, why are you looking at pics of _____________?” 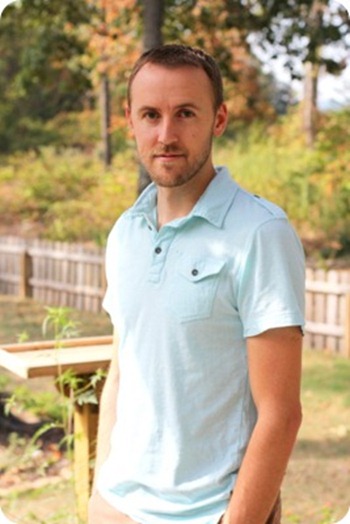 Now, it’s your job to fill in the blank with the appropriate celebrity name.

(It’s something I’ve been telling him for years).

3) That handsome man you see above is traveling again. This time only to Houston, but it doesn’t much matter whether it’s Houston or Timbuktu, when he’s not here, now does it?

Actually, I guess it does, since he can drive home on the weekends. 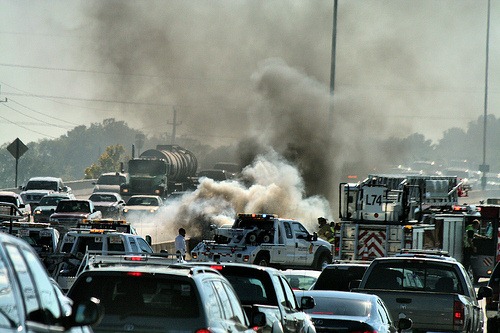 Of course, he’ll probably have to drive through something like this on his way.

He told me it took him an hour and a 1/2 to drive ten miles to work this morning.

(I believe that is why the words “road rage” were invented).

After all, he gets his flair for the dramatic from me. 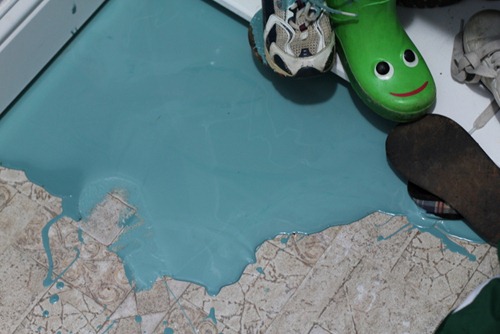 Hmm…apparently, not so dramatic after all.

(#2 claims that he just happened to be standing in the doorway when he saw the paint can fall “because it was sitting on an edge, Mama.” I thought about explaining that whole inertia—things at rest tend to stay at rest—concept to him, but one look at the expression of practiced innocence on his four-year-old face told me I’d be wasting my breath).

5) We’ve had a lot of rain in the past few days, and our yard is basically one huge mud puddle waiting to swallow us whole every time we walk out the door. 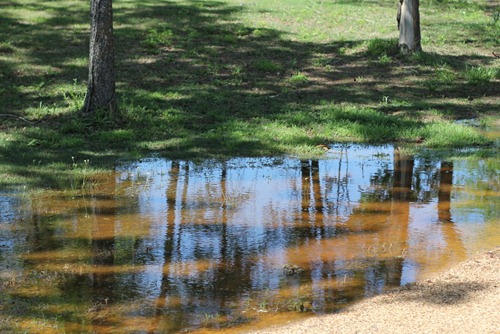 Seriously, people. If you ever want to do one of those Mud Runs that seem so popular these days, come on over.  We’ve got it in spades. Literally. As in, I should probably just give my children spades and let them go at it.

6) Bonus: No pics of this one (although you’ve already seen what I was wearing, and my expression in the first pic pretty much says it all), so I wasn’t even going to include it, but…you know me and my storytelling self:

So, as we were leaving Walmart one evening, I was holding Della on my hip—because she had missed her nap and was at the tail end of her patience with this grocery-shopping business—and pushing our very full cart with my free hand.

In the process of forcing the cart over the metal door-strip on the floor at the exit, I dislodged a rather precariously perched bag containing a jug of milk.

It proceeded to burst spectacularly upon contact with the ground and bleed out into the parking lot at an alarming rate (though, how a single gallon of milk exiting its container at such speeds can take so long to finish doing so still baffles me).

There was a man (notice I did not say gentleman) coming in the door just as all this happened.

He looked me over—taking in my toddler-adorned hip and little boy-flanked sides in a glance—then said, “Aw,” stepped over my still-gushing bag of groceries, and went inside.

So, I leaned down, still carrying Della, picked up the near-empty jug and attempted to avoid getting her and me too damp as I smooshed it in the perpetually-too-full trash bin at the exit.

…while milked flowed freely down the parking lot slope and every single person in sight just stared with various expressions of bemusement and pity.

Just as I had decided to cut my losses and run, a gentleman approached and said, “You go on. I’ll tell somebody inside they need clean up out here.”

I had the distinct impression of having lived out the story of the Good Samaritan, just without all the beating/robbing/being left for dead bit.

“Now which man was a neighbor to the harried mama of three littles?”

“The one who had mercy on her.”

“Go and do likewise.”

(I did mention Ezra gets his drama from me, right?)

36 thoughts on “5 Things Thursday: My life this week”