I mentioned a few weeks back that it was pretty much “launch week” around here.

What that means, if you’re new here or if you generally turn your mental station to static when I start talking about exercise (oops! you probably just did, huh? : )) is that, as a Les Mills BODYPUMP and BODYCOMBAT instructor, I’m responsible for memorizing a new set of choreography (moves/music)—what we affectionately call “chorey”—every three months and then presenting it with my fellow instructors in that particular format.

It’s both the most exciting and the most stressful couple of weeks (in terms of fitness) out of every quarter.

I know that may sound a smidge dramatic, but we take our launches seriously (ish).

Actually, all of our instructors have kids and busy lives, and I feel like all of us are just getting busier (hello, twins!), and the more that happens, the less we stress about what we should wear, which direction our benches should be turned, or exactly which hand we should use when passing off the mike (that last one was a joke).

Still, one launch is kind of a big deal.

I live 30 minutes from our gym, and launch week always requires multiple extra practices at weird times of day, and if you’ve ever disrupted 3 small children’s naptimes/routines for multiple days in a row, you know things can get pretty hairy pretty fast.

But throw TWO launches into one week, like we did this last time, and things are beyond nuts!

Especially when the nice people at Les Mills who plan the chorey choose to use the same song for two different formats (nothing like having the urge to do a jump-kick when you’re in the middle of a squat track because your brain can’t decide which move is supposed to go with this music…because they both do!).

ANYhoo, two weeks ago, we launched BODYCOMBAT on a Wednesday, and it went fantastically. Probably the best launch we’ve ever done, despite the fact that it felt like a sauna in there (my face hasn’t been that red since my husband asked me out on our first date—more on that soon).

Here we are, decked out in our matchy-matchies right before the sweat-bath began: 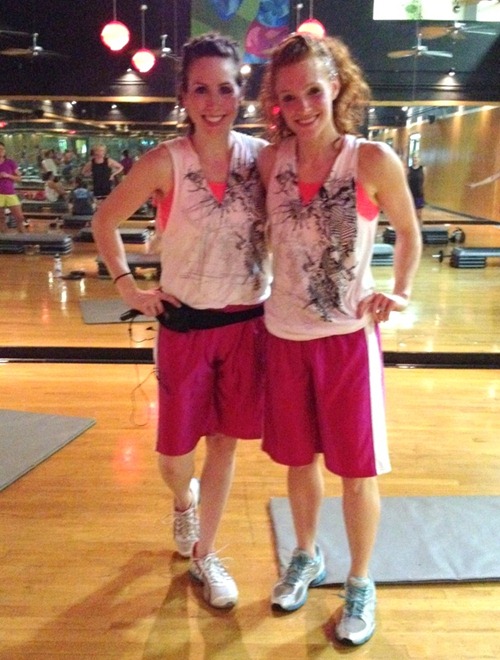 I’ve said it before, and I’ll say it again: if you need an excuse to dress in coordinating outfits with your adult friends (something that is generally frowned upon past age 10, with the exception of sports teams), become a fitness instructor. (Just don’t buy matching underwear).

BODYPUMP launch went equally well despite the fact that I felt seriously underprepared and was having major brain malfunctions on the day of.

And here we all are, decked out in our Cinco de Mayo neons. 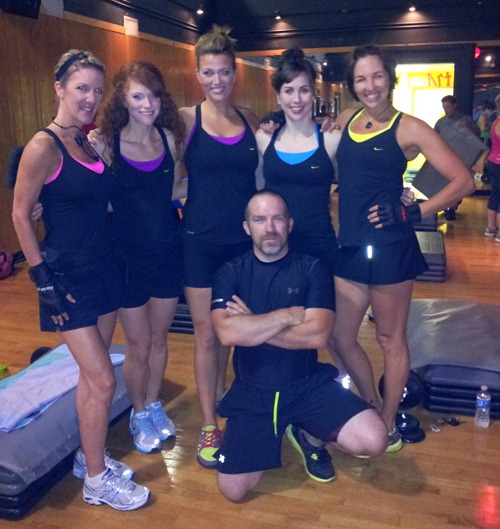 I’m not short, but you would never know that based on this picture because we have some seriously tall, leggy women on our BODYPUMP team

(Maybe that’s why I wore my hair in a “blogger bun,” even though I was teaching a fitness class—I subconsciously felt the need for a few more inches). .

So…there’s your fitness update for the first time in quite a while.

If you’ve wondered whether the Move-it Monday fitness posts have been scarce due to my pregnancy, the answer is both yes and no.

Yes because I don’t have oodles of extra energy these days, so making videos about specific moves sounds about as good as licorice with a root beer chaser to me (ugh…can’t stand either)—both for the effort involved and for the prospect of watching my belly on video. : )

No, because I haven’t slacked off on my own personal exercise regime…yet.

I’ll be honest: things are starting to ache and pull and stretch in weird places.

It makes me nervous for what’s to come, but I am taking it one day at a time and very grateful that my partners in crime you see up above are awesome about covering classes and picking up slack (in whatever form it takes).

Also, I am trying more and more each day to embrace what Jesus said in Matthew 6:34:

“Therefore do not worry about tomorrow, for tomorrow will worry about itself. Each day has enough trouble of its own.”

Amen to that last part!

Speaking of which, today is jam-packed because it’s party week (how did that happen so fast?), and there is much to be done.

Time to get a MOVE ON!

(What are you working on today?)