If I’d known I would be spending my weekend in Fairyland, I might have brought a ball gown.

Something reminiscent of this, perhaps? 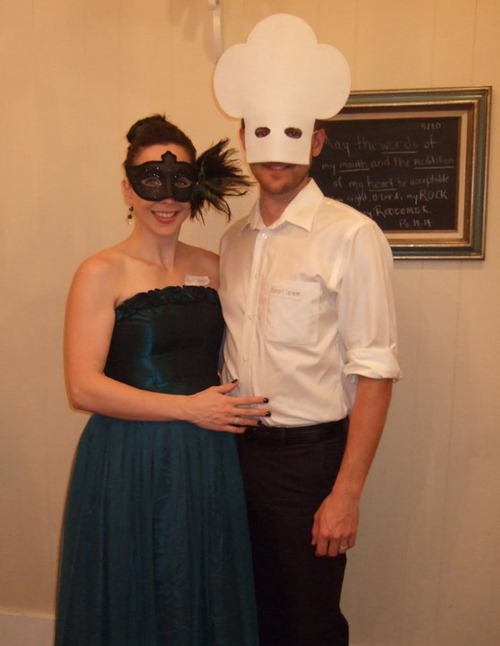 {Ha! This is the $7 Goodwill ca. 1998 prom dress I scored to wear to Mandy’s surprise murder mystery birthday party. I’m 8 months pregnant with Della in this pic}.

Still, despite my lack of formalwear, I did have some fun getting more dressed up (for sure!) than I do when Shaun’s not around, helped out in part by the fact that I scored big time at Old Navy’s one day 40% off everything in your bag sale last week.

You’ve already seen this particular outfit from Friday’s post, but there was no shoe shot, so I thought I’d do the full-length version this time, even though it’s a bit on the fuzzy side. 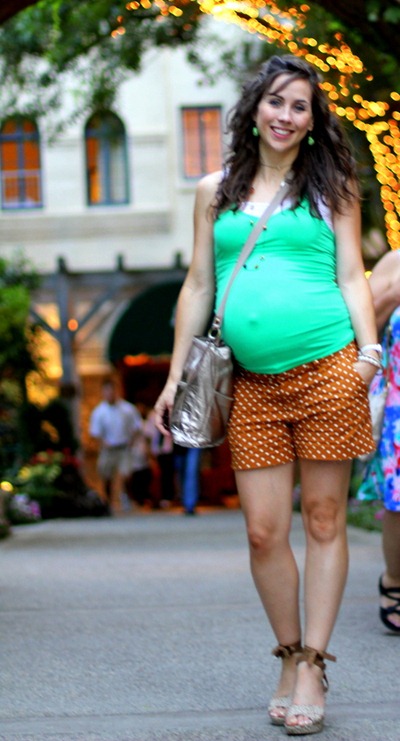 I bought the tank, shorts, and shoes at that ON sale I just mentioned for a grand total of $17…not too shabby, considering the shorts weren’t even on super-sale (you better believe everything else was). I just couldn’t pass up the chance at cheap polka dot shorts.

I wore this on the flight there and got asked pretty much everywhere I went how far along I was, what I was having, etc., etc.

It didn’t bother me a bit, but it made me realize that you don’t see too many big-time pregnant ladies in the airport.

In fact, one guy eyed my belly nervously before expressing surprise that my doctor was still letting me fly.

We spent Friday doing a little bit of shopping at the various quaint boutiques within walking distance of the inn, and I wore this uber-comfy maxi that I practically stole from Beall’s for $6 (with a coupon and “free” money). 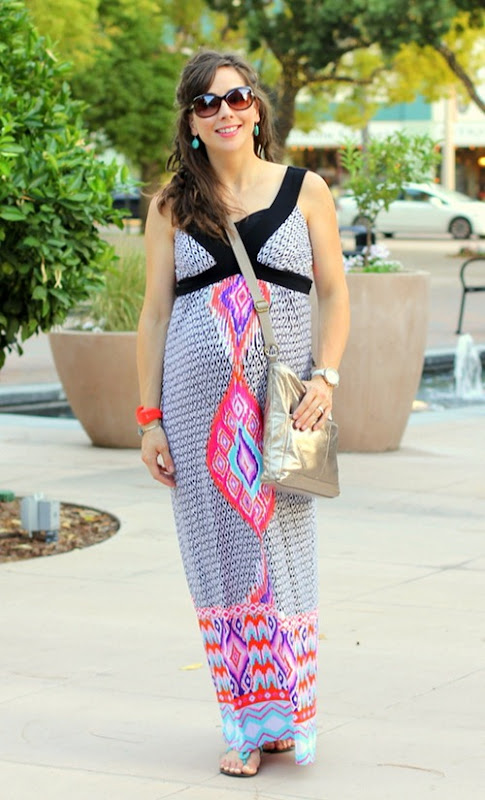 I think Shaun regretted it every time he looked below my rib cage (he’s not a big fan of bright colors and crazy patterns), but I didn’t even bother changing when we went to see Casablanca at an old-timey theater about a block away. 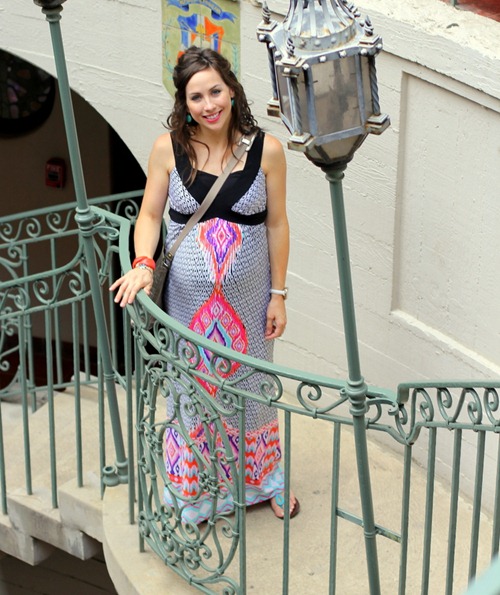 The theater was packed with folks who were just as excited as we were to see such an iconic movie in such a fun setting (velvet curtains, lots of ornate wood carving and decorative details), and I was glad to be wearing something that made sitting through a two-hour movie without a bathroom break (it would have involved some creative crowd surfing to get to the aisle) a little more bearable. 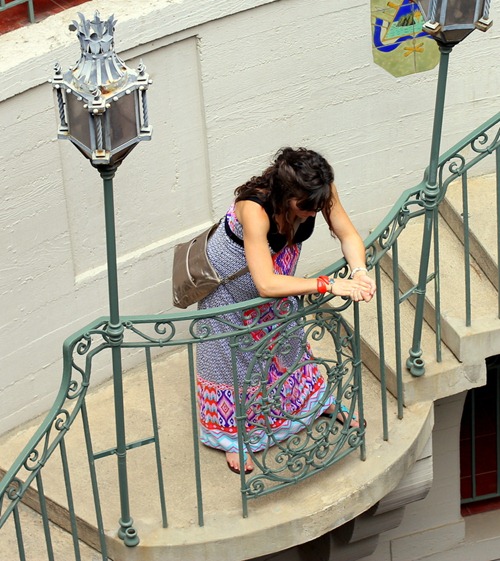 I’ve already gushed about how fantastic the Mission Inn is, but here I am gazing down 3 stories of spiraling stairs at all the gorgeousness below (I didn’t realize Shaun was taking the pic)…something I did a lot of while we were there. 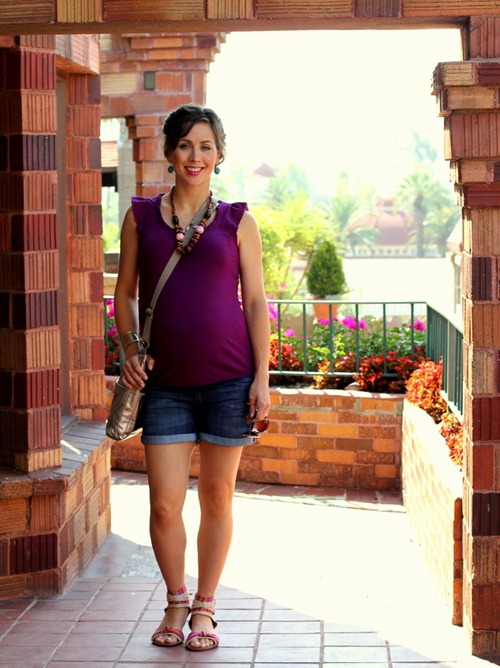 Saturday was another relaxed day of eating, exploring, and naps (Shaun even sent me to the Inn’s spa, which was the most luxurious place I’ve ever been), so I opted for a casual combo of a tee with jean cutoffs (Pea in a Pod), and those ankle-cuff sandals that I devoted an entire Wardrobe Wednesday post to a few weeks back.

That night, we drove a few cities over to see Music Man at The Candlelight Pavilion—a dinner theater venue that someone in the airport recommended to me, oddly enough (and with good reason; both the food and the show were quite good). 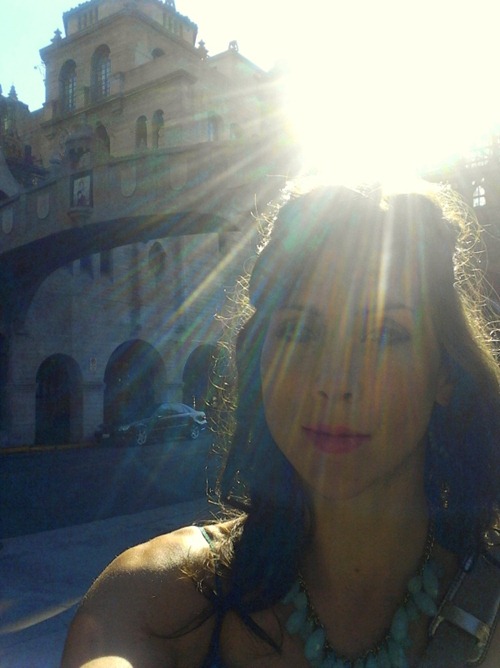 Shaun had to run back to the room to grab something, so I fiddled with my phone camera and some fun sun flare shots (ack! my hair’s on fire!) while I waited. 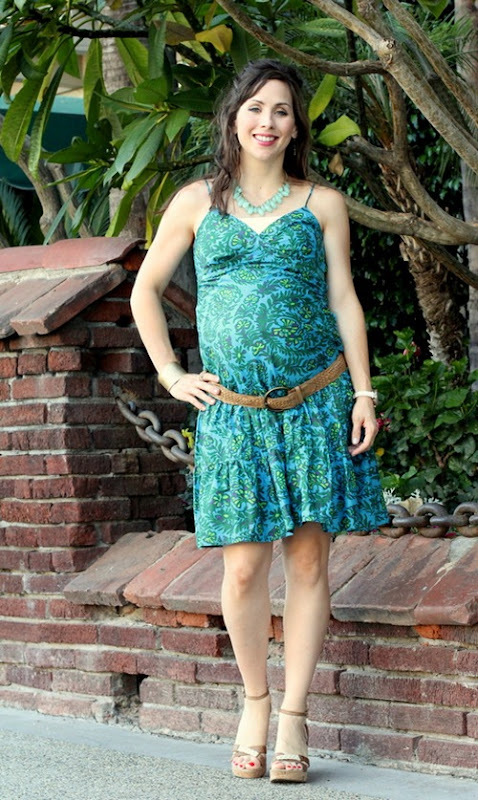 I wore a $6 GAP/Goodwill dress with $3 MIA/Goodwill wedges and a $3 GAP belt from eons ago, and I can’t help but notice two things about this particular get-up:

1) My skin, although never tan, looks particularly pasty in this shot. And although normally I would just say, “That’s about right,” all of my recent traveling has provided me with considerably more sun exposure than I normally get, so this time I’m going to blame the lighting.

2) The combos of blues/greens and flora/fauna pattern on my dress give my belly a bit of a globe-of-the-world look. 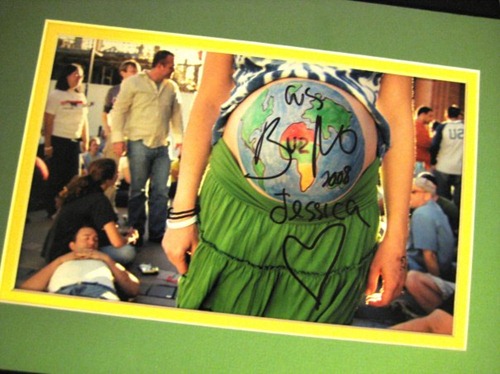 This is not my belly, but it is the belly of my former pastor’s wife, and it not only got her noticed in line at a U2 concert and upgraded to a front row seat but also got the photo of it signed by Bono himself (as you can see in the pic).

And finally, I wore yet another $6 dress (apparently that was the magic dress number) from Old Navy for the plane ride home… 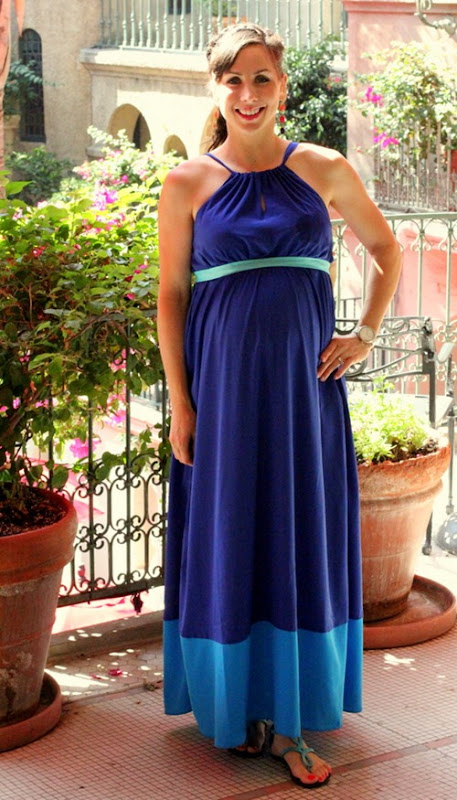 I added the turquoise ribbon because it had a tear in the fabric (part of the reason why it was so cheap). In fact, I brought my glue gun with me and did it at the hotel, and I’m sure that the airport guys who searched my bag were holding that gun up with raised eyebrows (I was too chicken to put it in my carry-on lest they consider it a potential weapon—“Hold still so I can burn you! My cord doesn’t reach that far!”—and confiscate it). 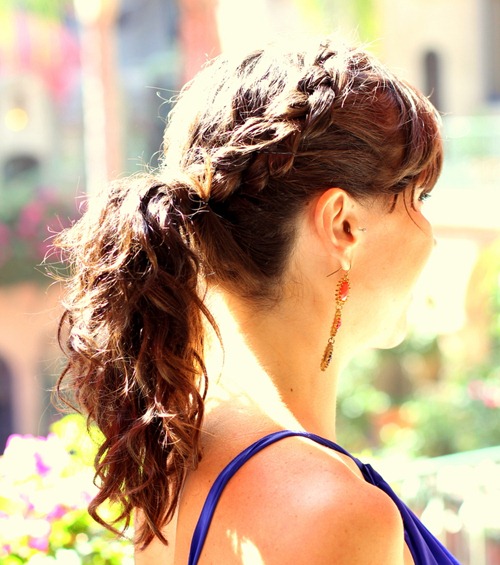 A girl in the elevator told me she liked my hair and asked me how I could do it myself just using a mirror. And I told her the truth—which is that I have to do it entirely from feel because if I look in the mirror, I get totally messed up.

Seriously, it really wouldn’t have mattered what I wore one bit because this last getaway was the most relaxing, enjoyable, absolutely magical time spent yet with the man I love.

I will be hanging onto remnants of it for weeks to come, I think, as we attempt to crank out quite a few house projects and just generally make it through the rest of a busy summer before the twins come.

Heck, I think I’ll be be reminiscing about it when I’m 90.

It was that good.

And so is God.