So, it’s kind of been forever since we’ve played a round of Thrifted or Grifted.

Not sure why other than that I’ve been in a bit of a thrifting funk, what with the mountainous belly and all.

But I did manage to rustle up a couple of outfits this week, so, by golly, we’re going for it!

So…what is Thrifted or Grifted?

It’s a silly little fashion game I came up with in which I wear two similar ensembles, and you test your thrifting savvy by deciding whether an outfit is:

If you’re a Thrifted or Grifted pro, then you know the drill—squint through the cracks in your fingers, phone a friend, do the Hokie Pokie while you turn yourself around…whatever it takes for you to feel fully satisfied that you have sufficiently scoured each outfit for telltale signs of thriftedness (WRINKLES DON’T COUNT!) and then comment away telling me why you chose which one you did.

The commenter I find most entertaining (there’s nothing fair or random about it! ; )) will get 5 free entries into our recent earring giveaway. (I’ll announce the winner tomorrow!) 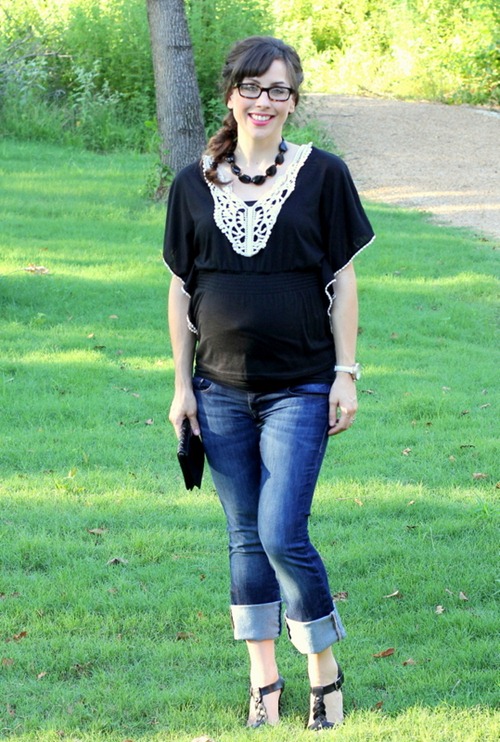 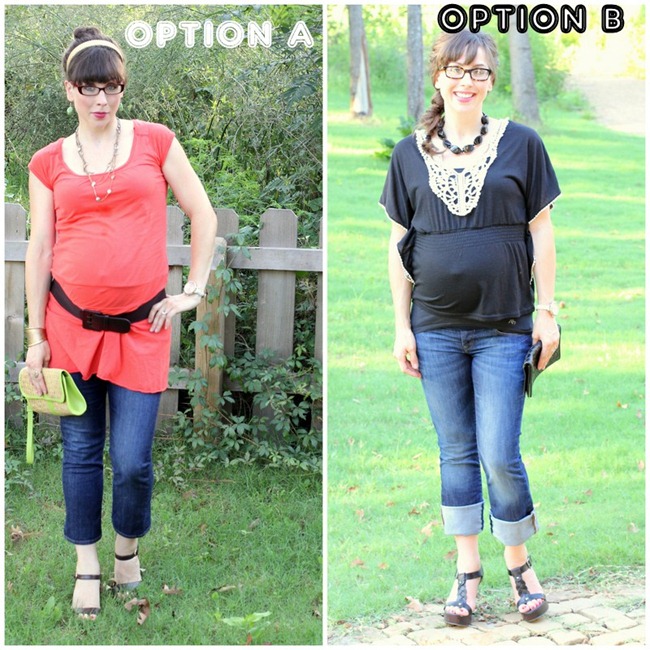 Confession: It took pretty much every ounce of willpower after actually seeing these photos for me to post them.

Puffy legs + jeans that end right above the ankle do not a fetching combo make.

I could quibble about several other things, but y’all didn’t stop by to hear me whine, so I’ll restrain myself to simply apologizing that I didn’t get a better shoe shot and assuring you that both are in pristine condition so you’re not missing out by not being able to give them the 20 point inspection.

On a more satisfying note…anybody remember my “Which glasses should I choose?” post from, oh, I don’t know, maybe a couple of years ago (okay, so 5 months, but it feels like eons).

Well, during our recent trip to Florida with my parents, they were nice enough to take the kids for a day while Shaun and I watched the new Spiderman movie, ate a leisurely lunch, and…glasses shopped?

And quite by accident.

Since my parents were driving our van, our activities were limited to a walking distance range, but we discovered something very interesting about Florida: they have an overabundance of eyeglass and mattress stores (Shaun reasoned that the high number of retirees created the demand for both vision correction and a good night’s sleep).

Seriously, along a one-mile stretch of highway, we counted no fewer than 5 places to buy glasses and at least 6 mattress stores. Kind of nuts, right?

I spotted a BOGO sign in the door of a brand new store, which looked a little more promising than its rather faded and dated-looking neighbors, so we wandered in and proceeded to the spend the next 2 hours trying on and deciding on two pairs of glasses each (he’s needed some for quite a while as well).

Just as a refresher, here’s the option that won 57% of the vote when I asked for your feedback (there were 5 options, and no other option got more than 16%, so it was a pretty overwhelming response). 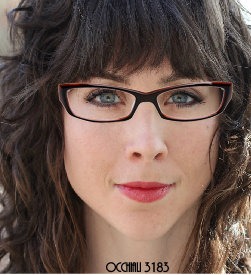 And here’s one of the pairs that I bought in Florida. 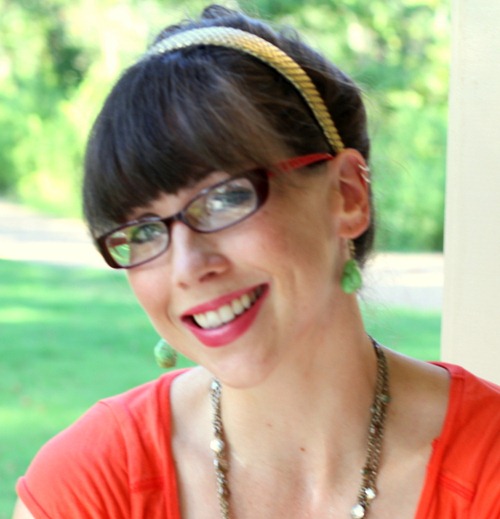 {Pardon the blurry photo. that’s what happens when your six-year-old does the honors}

Kind of uncanny how similar this style is to the one you guys voted for, isn’t it?

And, honestly, it had been so long since the poll, that I didn’t even realize I was doing your bidding (apparently, you are planted deep within my subconscious…oh my).

I’ll just chalk it up to great minds thinking alike.

{By the way, the thing that sold me on this pair was the fact that the earpieces are red}. 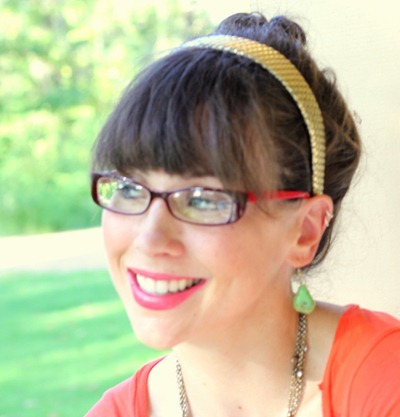 And since it was BOGO, I even got to go with what I reeeeeeally had my heart set on—the perfect pair of geek-chic tortoise-shell frames. It didn’t hurt a bit that my husband (and the adorable and extremely patient/helpful salesgirl) liked these the best too. 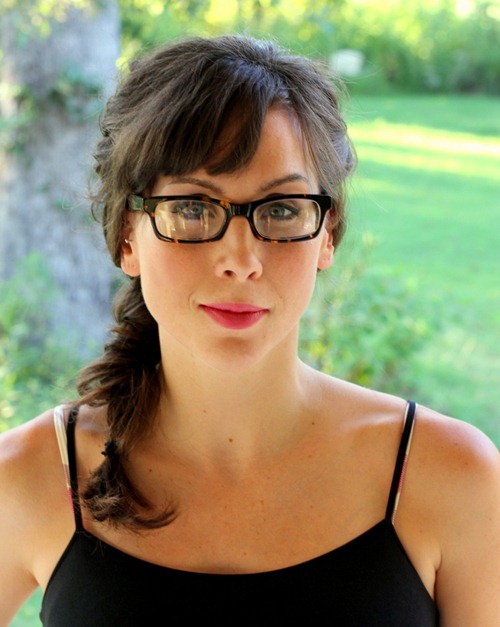 “May I stamp that book for you?” 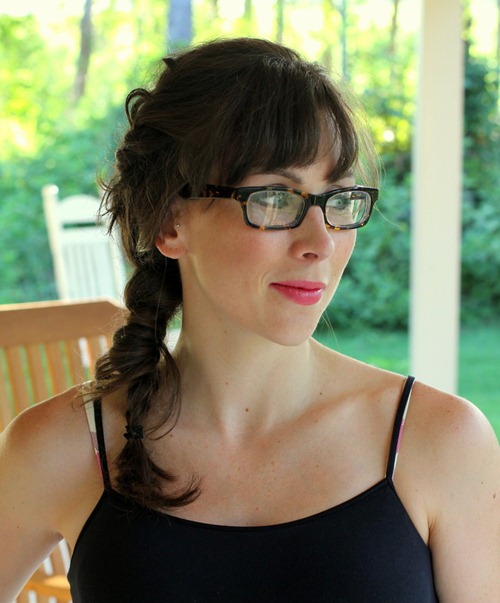 {These pics were snapped by my accommodating brother whose hand is just a tad steadier than Ezra’s}.

P.S. Yup, I brought the bangs back. And a day later, I got my first Zooey Deschanel reference in 6 months. I like these things! : )

Sure, they’re not my hubby’s fave, but, as I informed him when I sent him a text of this pic (which was right after my haircut): 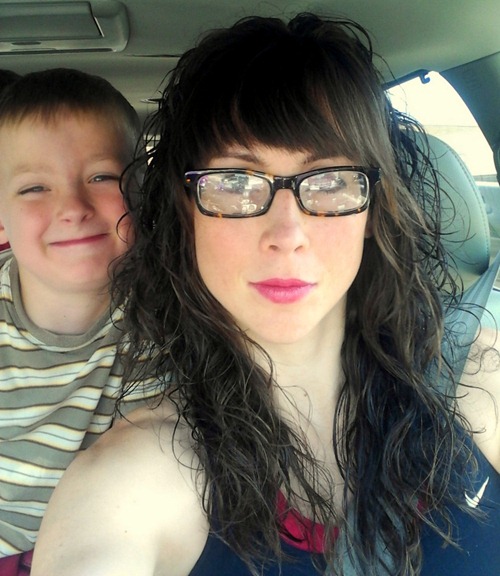 …if you’re going to head off to California for weeks at a time, I can’t be held responsible for what I do to my hair while you’re gone. ; )

His response?: “Well, you look beautiful.”

Smart man, that one.

Which outfit is 100% Thrifted?