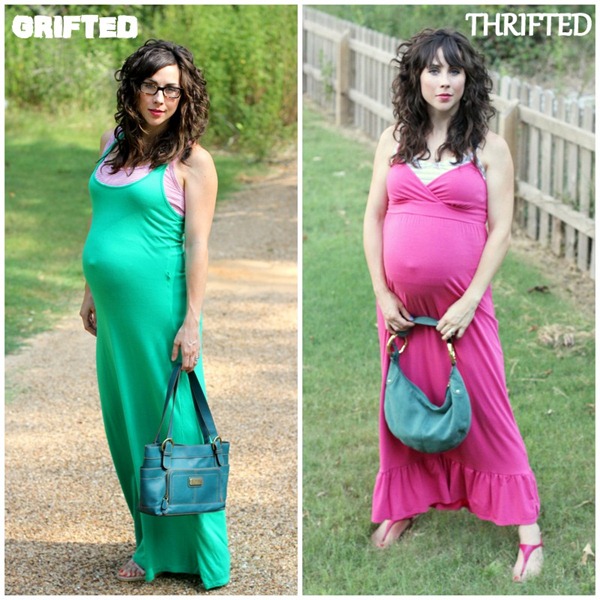 The majority was right…by a hair (or a ruffle, since that seemed to be the major deciding factor for several of you).

Oh, and my favorite commenter this week was the ever-entertaining Amanda (who has not one but two fantastic blogs, by the way: Royal Daughter Designs and Daes of our Lives), who said:

“I’m going with A. B fits you like a maternity dress, but A is too big in the chest (give it a few months, right?), hence the uber-low neckline, and the need for a tank underneath. Because you’re modest you wore a tank with both, but if your hubby is like mine, he’s wishing you skipped the tank…on both. *wink*
So yes, I am basing my guess on your bust-line. It’s my bust (er, best) guess. :).”

She might not have gotten it right, but she is 100% right about 2 things: 1) The strap length on Exhibit A is way too long. It’s actually going to the sewing room before I wear it again, so I can shorten them, and 2) My husband would definitely have liked both dresses better without the addition of the tank tops. : )

P.S. Several of you commented that you really liked the bag in Exhibit A, so I thought you might like to know that, if all goes as planned, I’ll be hosting a Shop My Closet for accessories (think shoes, bags, scarves, and jewelry) this weekend (look for it Saturday or Sunday), and that purse will one of the items for sale.

Do you remember that game from Youth Group or slumber parties called, “I’ve never…?”

Okay, so maybe some of you remember it as a drinking game from college, but I’ve never (ha!) played that version (you’ll see why in a minute).

Just in case you’re feeling a bit lost, the basic premise behind “I’ve never” (or, “Never have I ever,” which just seems a bit redundant) is that you sit in a circle and one person says something that they’ve never done—usually something that most other people have—and then everybody who has done that thing has to ___________________.

Depending on the version of the game you’re playing, the action varies. You might have to take a shot or run around the room or eat something gross or…yeah. The list is pretty endless.

Well, today, I thought for 5 Things Thursday, it might be fun to play a virtual game of “I’ve never,” and while I can’t make you stand on your head or run laps around your house if you have done the things I haven’t, I would still love it if you’d play along with your own list of 5 “I’ve nevers” in the comments.

I’m 29-years-old, and I promise I have friends, but through a strange convergence of circumstances, never once have I ever been part of a wedding party as a maid of the bride.

Been drunk. Or even a little bit tipsy.

Part of that is because I’m a pretty big teetotaler by principle, but it also has a great deal to do with an aversion to the taste of alcohol. Any alcohol. If I can taste it at all, I don’t like it.

Strange side story: when Mandy and I went to Blissdom this past February, they hosted a party one night, which included cocktails and appetizers.

As a tray went by, I grabbed some sort of grapefruit-y concoction on a whim and managed to actually finish it (granted it was about an inch deep in a tiny cocktail glass, but that’s “good” for me) without spitting it out.

It is literally the only alcoholic drink I’ve ever consumed in full in my entire life.

So, imagine how terrible I felt when I remembered later on that night that I was 10 weeks pregnant with the twins (although I didn’t know the twins part yet) and had completely forgotten that momentous fact when I had that drink.

Don’t get me wrong…I’m under no delusions that one, tiny, watered-down drink in any way harmed my babies, but I do find it incredibly ironic that the least likely person in the world to drink while pregnant (or ever) did just that…without even realizing it until it was too late.

Can we say (double) pregnant brain?

Had any part of my body waxed

(although I did attempt a home version once and completely chickened out).

The very thought makes me shudder.

Been to Chuck E Cheese.

We do plenty to keep Chick-Fil-A in business, where they have both a playground and edible food.

Not even a toe…although I did smash my big toenail so badly during an exuberant game of Ultimate Frisbee that I lost it and had to wear a fake one so I could still wear my open-toed shoes at my wedding.

What have you never done?

I promise to take a water shot for every one I have done.