I’ve said it before, and I doubt I’ll stop saying it as long as I write this blog: I abso-flippin’-lutely love reading your Thrifted or Grifted comments.

{And all your other comments for that matter; I read every single last one}

My husband said something the other day…to the effect of: “You have really good commenters.”

And I couldn’t agree more.

Y’all are so funny and expressive, and it puts a big ol’ grin on my face every single time I get a new comment notification.

My husband also pointed out that yesterday’s comments were so lively and detailed that I was going to have a hard time choosing my favorite.

And he was right again (that man knows his stuff).

So, I figured I wouldn’t limit myself to just one favorite comment today but instead choose 5 (since it’s 5 Things Thursday and all), and in the process answer some questions and extend some thanks—sort of a multiple bird-killing with one stone kind of thing (wow, that sounded violent).

“Wow-wee… you look amazing. my gut is telling me A is thrifted. my gut is also telling me I want a cupcake… but I’m trying to ignore that! :)”

Okay, so I mostly chose this comment because of the cupcake part (girl, I feel ya; I just ate 5—FIVE—oreos!!), but lest you think me egotistical for choosing to feature a comment that starts with compliment to me…let me ‘splain.

Historically, I am terrible about taking compliments. Like, truly awful. I have been known to argue with the complimenter about why I’m not deserving of the compliment.

I’ve gotten better, but I still somehow feel that, if I don’t think I deserve the compliment, or if I just say thank you, I am somehow being either a) untruthful or b) arrogant.

So, I’m working on getting better at just saying thanks.

And that’s what I’m doing now.

Y’all have been SO incredibly sweet, encouraging, and just downright stinkin’ awesome about your comments on my post-twins figure in Wardrobe Wednesday posts that, even though I feel a bit look-at-me for bringing it up, I also feel like I would be rude not to acknowledge how much of a self-esteem boost they’ve been and how greatly appreciated they are.

“Soooo happy you are feeling better! And even happier that you feel well enough for T&G! Woot! Woot!
Clearly, I’m terrible at this guessing, but I’m going w/ B. Not sure why….just gotta gut feeling. Or is that hunger…..not sure!
Either way, you are looking great Hot Mamma!
(And maybe I’ll get picked for best comment due to my overuse of exclamation points!!) ;)”

I’m sensing a theme—apparently reading T+G makes you guys hungry (is there some sort of food hidden in the pattern of my dress that’s sending out subliminal messages?).

And I just can’t resist featuring Leigh Anne’s comment because a) it’s funny and cute and has an overabundance of exclamation points, and b) Leigh Anne is one of my nicest, most incredibly uplifting readers who never fails to put a smile on my face with her comments.

Sadly, even though we live in the same state, we are still 10 hours away from each other. Darn your ginormousness, Texas!

“A is thrifted. Because that dress is gor.ge.ous. And when you come across a find like that at the thrift store, you thank your lucky stars and then brag about it for years. Thrifted perfection. I’m sure of it.”

Maggie, your confidence is too much to pass up. And thanks! I like the dress too! : )

Check below to see if you were right.

“i voted b is thrifted because a) i remember the saga of the jean jacket that you’re wearing in a (and it was a good one) b) i really hope i can just go out and buy those shoes in a and not have to find them in a thrift store because in these parts they’d be hard to come by and c) i really like your hair. that has nothing to do with anything i just wanted you to know.”

I chose Emily’s comment because a) she was one example of several of you who remembered the jeans jacket saga, and I’m so impressed she (and the rest of y’all) were paying such close attention, b) I felt the need to publicly apologize to her for her inability to find those shoes anywhere but a thrift store, and c) she was one of several to comment on my hair in this post, so I wanted to say THANKS and give the link to the post I wrote about how I style it since I had at least one other commenter ask me whether it’s naturally curly (yes).

“I’m choosing B as thrifted because the dress is a little shorter than you generally wear, and I can imagine you having a somewhat limited view of the mirror in Goodwill, what with the shopping cart, Della, the boys, (I’m assuming you bought this prior to twins) and whatever “distractions” you brought to keep said children amused.”

At least one other person commented on the length of the dress in B, so I figured I would explain: I actually bought it without trying it on and have only ever worn it in the photos from the post.

But thank you so much for giving me the benefit of the doubt, Judy, because the explanation you gave actually makes total sense and makes me feel like I’ve got a thrifting cyber-friend, which is fun!

All five of you are getting 5 entries into our next giveaway…I hope one of you wins!

So, my poll went totally haywire and ended up saying that I only had 9 votes. (Which is off by a couple hundred at least).

But, no matter what the number said, the percentage consistently indicated that majority of you guys thought that OPTION B was thrifted. 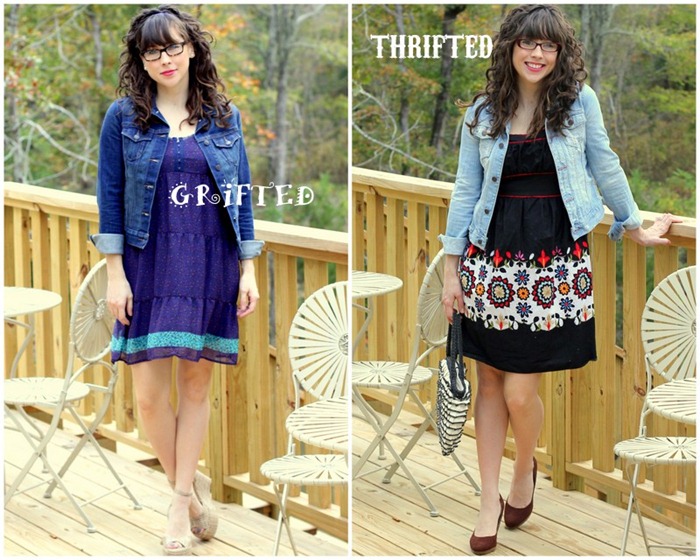 Also, I’m sorry about the confusion of the Ebay jacket.

I was not trying to trick you. And I debated whether I should use it, but since it is a secondhand item, even though I did not get it from a thrift store, I decided to go with it (notice I actually paid more for it than I did my Old Navy jacket…mostly because of shipping).

This post is getting pretty darn long, but I had one more question for you:

Should I keep the Old Navy jacket?

I’m all about asking you guys whether I should keep jeans jackets, but it fits a little strangely through the shoulders, and now that I see it in pictures (instead of just a fitting room mirror), it looks a little strange too.

I’ve even included another poll, which hopefully will work in its intended fashion this time.

Should I keep the grifted jacket?