I mentioned on Friday that we were heading back from a 4 day trip to New Braunfels. It’s about a 5 hour drive from our house, but, between the wonder of our van’s DVD player, coloring books, snacks, and the fact that Softa and Sabba (my mom and dad) were carpooling with us and had the older kids in their van some of the time, both trips went by surprisingly quickly and with amazingly few meltdowns. (As in, maybe none? Whoa). The twins did incredible too—napping, playing with their car toys, and babbling happily in the backseat.

The main point of the trip was to allow the boys and Della to experience their first taste of Schlitterbahn, an epic water park with multitudinous water slides, lazy rivers, and wild tube rides. The plan was that my parents would take the three older kids, and Shaun and I would hang out with the twins (preferably at the San Marcos outlet mall). Yes, I brought a bathing suit, but I never really intended to do much with it.

But then, the morning before Operation Schlitterbahn was set to commence, my dad woke up with a bum hip and could barely walk. So, all the kids (yes, the twins too), my mom, Shaun, and I headed to the water park for the day. I’ll be honest—the prospect did not thrill me. But, it wasn’t too hot of a day, there were lounge chairs and shade in abundance, the park wasn’t very crowded, and Shaun saved the day by taking the big boys on rides while my mom and I entertained the twins and took turns watching Della play on the steps in the (chilly!) water of the River Lagoon.

I even squeezed in a “ride” with the boys. Granted, it mostly consisted of a slow float down a chute-controlled “river,” complete with odd little whirlpools that sucked you into their aimless vortex and left you at the mercy of complete strangers as they whooshed down the mini-waterfalls behind you and rammed into your tube, which, ideally, resulted in enough of a jolt to get you out of the whirlpool and on your merry way again. I still had fun, though, because my boys were kicking and giggling and “Mamaaaa”-ing the whole way down.

I also discovered that skin is very in. Okay, so I knew that. But I’m pretty sure the fabric on my tankini was enough to account for at least 4 of the itsy-bitsy bikinis that I saw go by.

Fortunately, I had a whole lot of cuteness close by to distract me from the endless parade of the 3 B’s (belly, bum, and boobs, in case you were wondering). 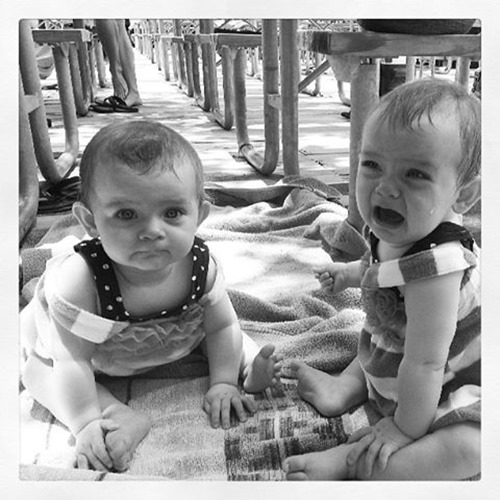 {I’m pretty sure Nola had just seen yet another 75% naked person walk by and was weeping for the death of modesty; either that, or I wasn’t giving her snacks fast enough. Hard to tell}

Of course, Schlitterbahn wasn’t the be all, end all of the trip. 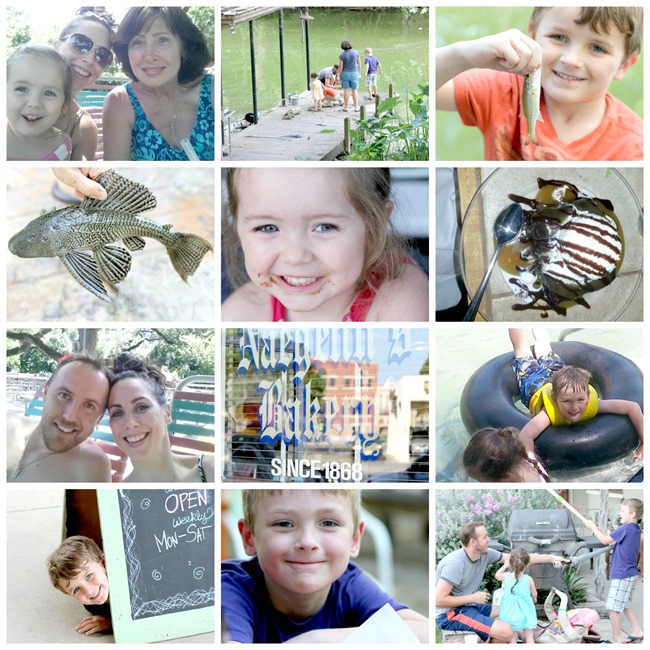 There were also trips to the oldest bakery in Texas (middle, third from the top), some net fishing off the pier—with results both impressive (second down from the top left) and underwhelming (top right), sword fights (bottom right),  and lots (and lots) of good food.

I actually managed to squeeze in a BODY COMBAT class at the New Braunfels’ YMCA (I’m pretty sure the other participants were wondering who in the world the crazy chick was whof kept jumping and yelling and seemed to know the choreography as well as the teacher), but that’s the only exercise I’ve done in a week.

So, I think it’s fair to say that IT’S TIME TO GET A MOVE ON!

I’m teaching BODYPUMP tonight, and I’m hoping to work in some BODYCOMBAT beforehand to help atone for my many culinary transgressions from last week. But whether I fit in any extra or not, that chocolate cake (second from the top right) was worth every calorically-dense bite.

P.S. I realize that that collage was sorely lacking in twin pictures. But that was on purpose, and I plan to make up for it later on this week. Pinky promise.