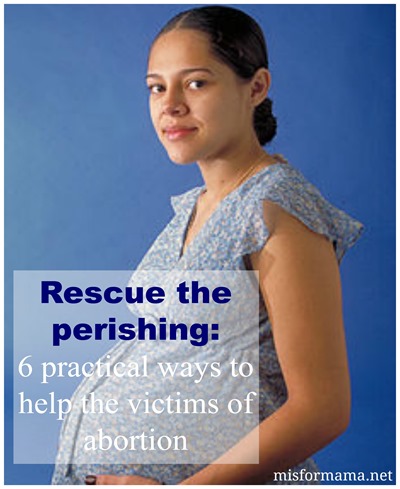 First of all, thank you so much to every single person who responded to yesterday’s post. Whether you agreed with me or not, it takes time and effort to speak your mind, and I am always grateful to hear from you.

That being said, I think the main thing that I feel compelled to respond to is this (not a direct quote at all, but a paraphrase of several questions I got):

“This is great and all, Abbie. But what are you going to DO about it? What can any of us really DO to make a difference?”

After all, writing that post cost me nothing more than several  hours of thinking, researching, praying, and writing. I spend more time that on a room reveal. So, there’s really not much bite to my bark if I stop there.

Proverbs 24:11-12 says: “11 Rescue those being led away to death; hold back those staggering toward slaughter. 12 If you say, ‘But we knew nothing about this,’ does not he who weighs the heart perceive it? Does not he who guards your life know it? Will he not repay each person according to what he has done?”

Because even though, yes, just like we talked about before, life and death are in the power of tongue—meaning that words are very powerful things—and dragging dark things into the light with our words is a step in the right direction, that verse does NOT say, “Talk the ear off of those being led away to death; theorize eloquently at those staggering toward the slaughter.”

The talking and writing part is most important in the first part of verse 12 (“but we knew nothing about this”). People need to know. And once they do?

Which is why I called our local crisis pregnancy center this morning and literally said this: “I want to volunteer. Other than that, I don’t even know what I’m asking for.”

That’s how clueless I am, even with a lifelong conviction about the sanctity of human life.

The lady on the other end of the line laughed and said, “Well, can you come in Thursday morning between 8 and 1?”

And I’ll be honest, y’all. My first reaction was, “Shoot. That’s my writing time.”

But then I remembered that I had already written enough. It was time for action.

It’s not much. But it’s something. It’s a step. And on Thursday I’ll find out the next step after that. Because if I’m learning one thing in this life it’s this: that when David described God’s word as a lamp unto his feet and a light unto his path, there’s a reason he didn’t say, “floodlight” or even, “high-powered flashlight.” Sometimes, God only illumines the next few feet of our life’s path, even though we wish we could see from here clear into eternity.

Which brings me to the nitty-gritties.

What can we do to help the victims of abortion (both the babies and the mothers)?

1) Volunteer at crisis pregnancy centers. If you have a genuine desire to help and a belief in the sacredness of human life, they won’t turn you away, even if you pick up the phone and sound totally lost. (I just proved that).

2) Mentor young women (and men!). When I taught part-time Spanish, I used to have the girls that had taken my Spanish 3 class the year before out to my house on Fridays (because there was no Spanish 4, but they wanted to keep learning). We ate yummy food and spoke Spanish and played with my (then only 1) baby.  It doesn’t sound like much, but it was a way for me to pour a little of my limited life experience into those young girls’ lives. I’ve wanted to do something like it again ever since then, but with moves and house-building and lots of new babies, it got shoved to the back burner. I am praying about finding a group of young women I can pour into again.

Of course, you don’t have to have people in your home. You can go to your local boys and girls club or find out about after school programs or get involved at your church’s youth group.

If you’re wondering what any of this has to do with abortion, let me assure you that when half of all pregnancies in America are unplanned and 4 out of 10 of those end in abortion, that means there are a whole lot of young women out there making bad decisions and in desperate need of someone who can show them Jesus.

Knowing someone loves them and is there to listen to and pray for them—someone who won’t abandon them, even in the face of an unplanned pregnancy, can go a loooooong way towards helping a scared young woman understand that she has a choice to let her baby live. And wise counsel and friendship can go a long way towards helping her make the good decisions that will keep her from getting pregnant out of wedlock in the first place.

3) Reach out to single mothers. 85% of all abortions are performed on single women, many of whom live alone and 61% of whom already have one or more children to care for. 69% are economically disadvantaged (code for: have trouble keeping food on the table and shoes on their children’s feet). In the same way young women need to know that they have somewhere to turn for guidance, these single mamas need to know that, if they find themselves pregnant again (or even if they don’t), they have somewhere to turn to for financial and emotional support.

A friend from church hosts something called Single Momma Mondays where she invites single mothers (and their children) into her home and provides them a safe haven for friendship and a warm meal. Sure, that’s only one day a week, but what if you coordinated with your friends to each take a day of the week, and you had Single Momma Monday-Thursday? Even knowing that one meal a day is taken care of can be a huge lightening of the incredible burden these women carry. (The way that my friend does it is to ask her girlfriends to contribute a dish on a particular Monday date so that the entirety of preparing a meal for 10 hungry mamas and their kids doesn’t fall on her; it’s a great way to share the load! I love being able to make a dish and drop it off, knowing that that small gesture is ministering to multiple women).

4) Adopt or foster a child. Yes, adoption is expensive and complicated. And no, not everyone can do it. But will you at least pray about it? I will.

Also, fostering is another great option. Heck, even getting certified to foster so that you can be a relief family for others who foster is a great way to support those hardworking families so they don’t burn out. Because it’s one thing to say that adoption is always an option and quite another to actually take a child in.

5) Get involved with ministries like Cities4life. It’s very different than what you might think of as your typical “abortion protester.” It’s about love and incredible courage, all mashed up into one incredible act of Jesus.

6) Pray. Did you just roll your eyes and think, “C’mon, Abbie. You said this was going to be practical!” Bear with me, please. Even though it’s not a physical act that involves leaving your house, prayer is so very powerful and effective. But I’m not talking about the kind of prayer you tag onto your bedtime ritual. I’m talking about the kind of fervent intercession that changes lives. Set aside a specific morning a week to pray for lawmakers to abolish abortion. Then another to prayer for mamas. And yet another for the babies. And finally for yourself so that God will reveal concrete things you can do to help. If you’re thinking, “But, Abbie. I have kids. Responsibilities. A job. I can’t just sit on my couch all morning and pray four times a week.” I totally understand. (5 kids, remember?). You can pray while you wash the dishes and scrub toilets, though. You can pray in the carpool line or while your child does yet another marathon potty-trip in Walmart (shudder). I think that being a mama gives a whole new meaning to that whole praying without ceasing business. We slip it in whenever we can, but the best part is that many of our tasks allow for that kind of spiritual multitasking.

You could also organize a prayer group that specifically focuses on the issue of abortion and all who are involved in it. Jesus said, “Where two or more are gathered in my name, there I am in their midst.” In other words, there is great power in joining together with like-minded/hearted women.

So, what, out of this list, am I going to do? (After all, how can I suggest these things to you if I’m not willing to at least consider them myself?)

Option G)—all of the above. Does that mean we’re adopting a kid tomorrow? No. And maybe not ever. And I haven’t even researched where the nearest Cities4Life ministry opportunity is (I just found out about it from a reader as I was typing this post). But I’m open to all of it. And I’m taking small baby steps like my Thursday crisis center field trip towards uncrossing my ankles and unclenching my fists so that I can actually be the hands and feet of Jesus to the world.

Will you join me? Oh, please say yes. I’d much rather not do this alone.