I am not naive enough to think that everyone shares my views on abortion, so the fact that there were dissenting opinions in the comments section on Monday’s post didn’t surprise or offend me. At all.

(And if you were one of them, I’m asking you to stick around and hear me out this one last time).

And yet, as much as I have no intention of harping on this subject from now on, I haven’t been able to escape the conviction for the last several days that I needed to write one more post right now on the topic. 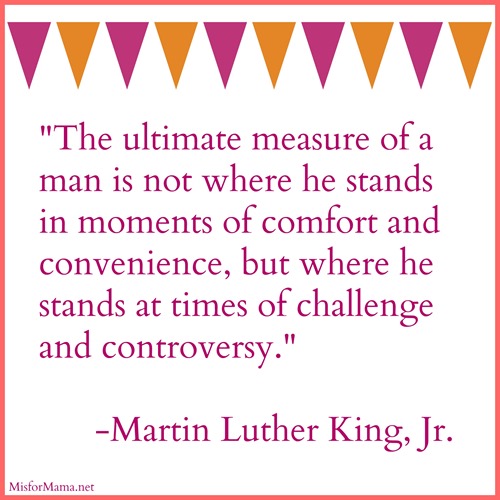 This is not about defending myself or changing your opinion of me. It is about asking some honest questions to which I really do want to hear your honest answers.

(Seriously, I would be honored if you would take the time to answer these in the comments, regardless of which side of the issue you fall on; I only ask that, since I am choosing to be respectful in my approach, that you do the same).

1) When does human life begin?

2) Once it has begun, is there ever a circumstance which justifies taking that life?

I know my answers. They are:

2) Once life has begun, there is never a circumstance that justifies taking that life. (I’m considering the topic of wars and capital punishment and protecting yourself against home invaders to be entirely different topics that we don’t have time to go into right now).

And since, both of those are my answers, it should come as no surprise that I am never in favor of abortion, under even the most dire circumstances.

It simply wouldn’t be logical since, as I consider an in-utero baby to have the same unalienable rights as every other human being, it would be the same as saying, “In general, I’m opposed to murder, but if my situation ever gets desperate enough, and my 2-year-old becomes enough of an inconvenience to me or enough of a financial burden or enough of an emotional drain, I suppose I would have to kill him. In a perfect world, killing my toddler shouldn’t have to be an option, but because we don’t live in a perfect world, and my situation is bad enough, I simply have to. I don’t have a choice.”

If you think that my examples of “financial burden” and “emotional drain” sound flippant, here’s another question:

Did you know that that Roe v. Wade allows for any abortion under any condition up to and including the moments before delivery?

I didn’t until I did some digging. That’s because when Gallup polls ask people if they favor upholding Roe v. Wade because it “allows for abortion in the first trimester,” they don’t bother to mention the fact that there are no “only in the case of rape” or “sure death of the mother” clauses or that the Supreme Court’s decision does not at all restrict abortions to the first trimester but instead describes the availability as limited only to how it pertains to a woman’s “health.”

Here is the further description of those “health” considerations (the language of the court’s decision, not mine…although the emphasis is mine): “The medical judgment may be exercised in the light of all factors — physical, emotional, psychological, familial, and the woman’s age — relevant to the well-being of the patient. All these factors may relate to health.”

In other words, a physician is able to perform an abortion on a women who is 40 weeks pregnant with the simple justification that the woman would be “stressed by” giving birth to the child, and the Supreme Court would/could do nothing to stop him. 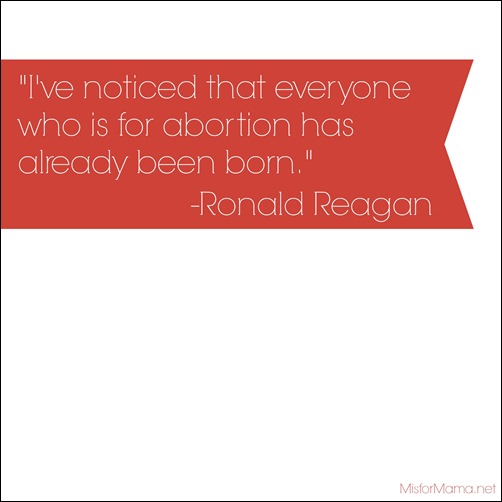 The percentage of folks who support abortions at any time and for any reason drops drastically because the more a baby looks like us and the closer it gets to breathing air outside its mother’s womb, the more uncomfortable we are with the idea of ending what is so obviously a human life. This discomfort extends even to those who consider themselves pro-choice, which means that, if the majority of Americans fully understood the complete license that Roe v. Wade gives to abortion, support to overturn it would rise even from the very people who are its greatest champions.

But what about the mothers? You keep talking about these babies, but you’re not even taking their mothers into consideration? It’s their bodies after all.

Let me address that last question first. Because it isn’t about a women’s right to do whatever she wants with her body.

If this were merely an issue of a woman tattooing herself or altering her appearance or doing anything else (even harmful!) to her physical body without directly affecting another human being, then, although I would strongly urge her not do something hurtful to herself, I, as an individual, would have no right to forbid her to do so. (I make the point about the “individual” part because we do already have statutes in place that allow the government to outlaw doing certain harmful things to your body, like taking drugs or engaging in prostitution, because they have the potential to harmfully affect others).

A baby is not simply an extension of or a blob inside another person’s body but its own person (as mentioned above when I cited the scientific factors of DNA and a heartbeat/unique blood type). 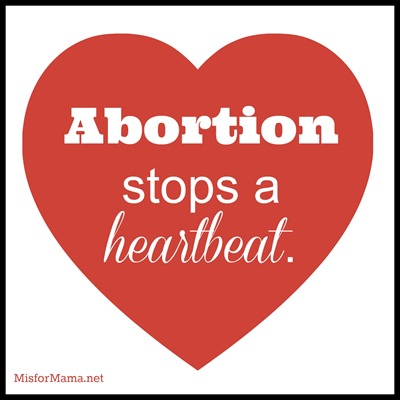 If you argue that the baby cannot live without its mother’s life-giving sustenance and is therefore not a viable human being, I have to point out that he will continue to rely on his mother for nourishment and care once he has been born, and without it, he will die. To extrapolate it further, there are many highly functioning children outside the womb who rely on feeding tubes or breathing aids to survive. (I’m not talking about a completely non-responsive, brain-dead person on full life support).

Does that then give anyone the right to take away that life-giving support? The law says no and will send anyone who does so to prison for murder.

And now let me address the accusation that I am ignoring the mothers in favor of their babies.

I believe with all my heart that abortions hurt women as much as they do babies.

Multiple studies conducted by the medical community (with no associations with pro-life organizations) have reported a connection between a woman’s having an abortion and a significant increase in her likelihood to develop mental illness such as depression and anxiety disorders (especially if she has multiple abortions). (Both this CBS article and this one from The Telegraph {UK} cover this issue, and neither of these newspapers have any connection to the pro-life movement).

And then, there are the incidents of women being dragged into abortion clinics by boyfriends or husbands. Of being pressured into having an abortion (by the very clinic who will get paid only if they go through with it). Of unsure women entering an abortion clinic for counsel and exiting, no longer pregnant, murmuring words like, “I didn’t know it was going to be like that.” These women deserve to know what they are getting into. They need to know the whole story. 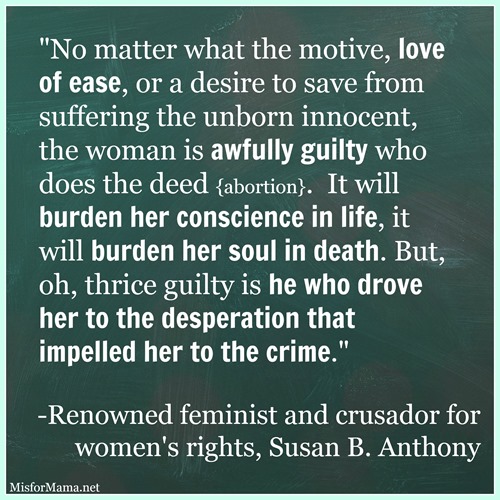 I have read so, so many stories of women who have some level of regret (some extreme, some more mild) about their decision to abort their babies (this site is pro-life but the testimonies on it are unsolicited and freely volunteered by women who have chosen to use their online feedback form), and while I’m sure I could find many examples of women who say that they feel no remorse and have had zero adverse effects from their abortions, the fact that there are so many stories of sadness and remorse and wishing that baby back—feelings that haunt women for the rest of their lives—tells me that this is not an easy thing for most women—that it is, and should be, a big, Big, BIG deal.

I feel deeply for the women who endure abuse and lack a support system. But in the same way that I could not condone taking the life of a child outside the womb who reminded an assaulted woman of her attacker (thus causing her emotional distress…often an argument for abortion in the case of rape) or killing a child outside the womb who was “one more mouth to feed” when there already isn’t enough food, I cannot promote that for an in-utero, just-as-alive child.

In short (not that this is short :)), since I believe that a baby is a baby is a baby whether in the womb or out, I would be betraying every fiber of my conscience to say that there are circumstances that warrant taking his or her life.

With that being said, you might actually be able to say that I am pro-choice. Because I am committed to finding ways (like going to the crisis pregnancy center today with my three little girls) to let women who are already pregnant know that they have the choice to let their baby live—that having an abortion is not the only way to avoid their lives falling apart (and, in fact, may actually be the thing that causes that to happen).  I am willing to do anything it takes to provide that choice, up to and including supporting them emotionally, spiritually, financially, and even being willing to mother their children if only they will let them live. 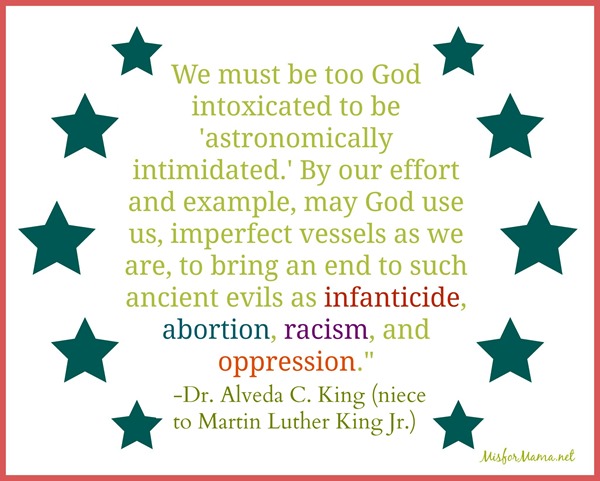 And now that I’ve had my say, it’s your turn.  I welcome your thoughtful responses to those two questions I asked at the beginning of this post (even as scary as that is to say). But more than anything, whether you answer me here or not, I encourage you to ask yourself those questions. If you don’t already know the answers, I beg you not to rest until you do.