I won’t even mention how long ago it was that I showed you the inspiration for Della’s big girl  room, but just know it’s been a while. And the thing is, it’s mostly done. And it’s been mostly done for a while. But the last 12% or so has had me stumped.

I wanted to do a gallery wall but couldn’t seem to find all the pieces I wanted for it. I couldn’t decide whether or not  to paint a vanity because I couldn’t decide on a color that I loved with everything else. And if I didn’t paint it, I didn’t want to keep it. And so it just sat there.

There were little projects here and there (mostly involving spray paint) that I kept putting off because of all of the other little details nagging at the back of my mind.

And then there was the issue of the bedside table.

Della listens to music each night, so she needed a place for her music player and her water cup, plus any other “necessary” odds and ends beside her bed.

But Della’s bed is very low, and finding a small table that doesn’t overwhelm the space or seem comically disproportionate to the bed has proven to be unexpectedly similar to solving a quantum physics equation hard.

Enter this cute fabric-covered bird table from Hobby Lobby. It was the last one on clearance, and it mostly went with the colors in her room, so I snapped it up and brought it home to roost (see how I did that?). 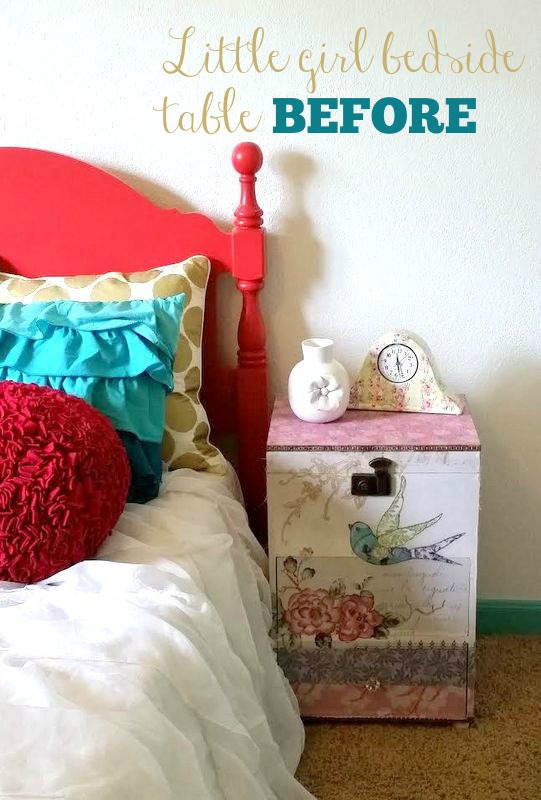 It’s cute, right? There’s absolutely nothing wrong with it by itself.

Except that it didn’t take me long to figure out that it wasn’t quite right for the space. Too tall. Too much competition with the rug, which I luuuuuurve. Not that that kept it from staying there for months because I couldn’t seem to find a better option.

Until Saturday, that is.

On a trip to Target for something else entirely, I spotted an adorably funky little table that looked like it just might finally be tiny enough and the right colors to make the space work how I wanted it to. 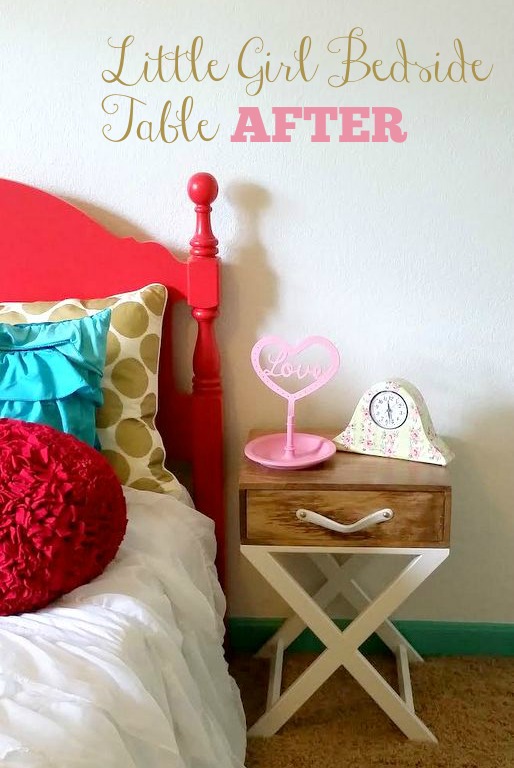 And you know what? I was right!

Now, I fully expect to get at least a comment or two saying, “But the first one was better!” And I get that. Because it is a very pretty table.

But I think when I show you the entire space you’ll see why the Target table was the better choice.

So, when will that be, Abbie? I mean, after all, it’s taken you two years (oops, I wasn’t supposed to mention that) to show us this much! (In my defense, you got another little peek back at Christmas, not to mention when I showed you this aqua and white stenciled desk).

Well, you know how sometimes something small just clicks, and all of a sudden, everything else just falls into place? For some reason, buying this little table was like that.

Suddenly, I knew what color I wanted to paint the vanity (which means it’s staying). I knew which art I wanted. Heck, I even knew how to end world hunger.

Okay, sadly, not that.

But I think I can say with relative confidence (see how I hedged there?) that I will be doing a full-on reveal of Della’s long-awaited (who are we kidding? you gave up waiting 18 months ago) big girl room very soon because I have a vision, ya’ll!

Oh, and in case you’re wondering what Della thought of her new table… 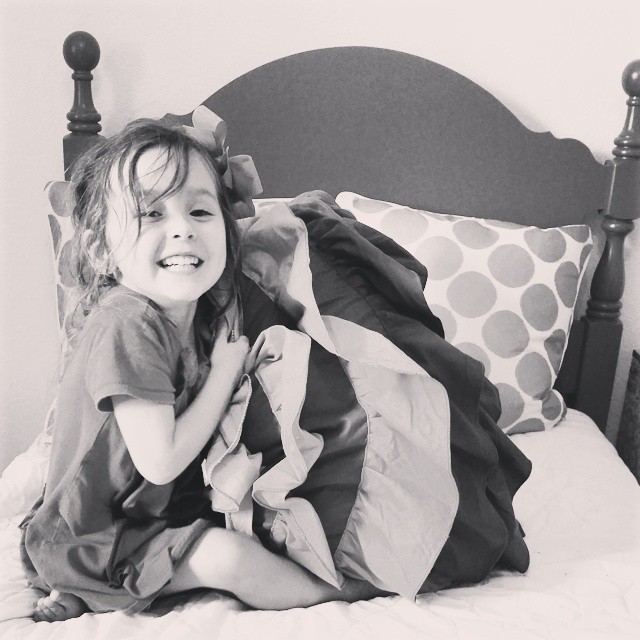 I don’t really know because she was too busy getting uber-excited about her new ombre ruffle pillow I also snagged on the same trip to Target (I don’t guess anybody who’s ever set foot in Target should be surprised that I walked out with a ruffle pillow and a bedside table when I went in for stools).

So, what about you guys? Does getting one little thing right sometimes break through a case of decorating block? I tend to get hung up on the details, so getting one of those banged out usually gives me a bit of push.

When was the last time you went into Target for something specific and only came out with the item(s) you had in mind? I think a feat of such Herculean strength would require avoiding all decorating aisles, party aisles, office supply, beauty, and clothing. So, yeah. Basically the whole store.