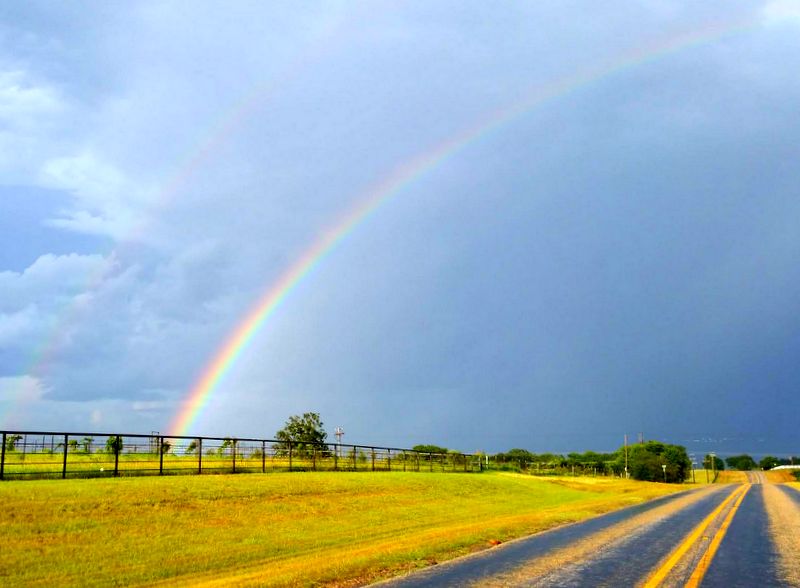 The soul would have no rainbow had the eyes no tears. -John Vance Cheney

I pushed through the gym doors with maybe 13 minutes to spare before the 2009 Turkey Trot kicked off and made a beeline for the bathroom. There was no way my full, 13-week-pregnant bladder was going to make it through a 5K without something embarrassing happening. Especially not with its being my third run at this whole pregnancy business.

As I walked, I absentmindedly massaged my lower abdomen, which had been feeling crampy all morning. I banged through the stall door, creating quite a ruckus in the thankfully deserted bathroom. My mind on the race ahead and the bread rolls I needed to mix up as soon as I got home if they were going to have time to rise before we headed to my mom’s for her annual Thanksgiving feast, I sat down on the toilet and stared unseeingly ahead.

It wasn’t until I moved to stand up that I saw it.

And not pink or spotty either. But thick and so dark it was almost black.

Everything froze. My mind. My body. Time itself.

And then, as if someone had taken their finger off of “pause” and mashed the fast-forward button instead, a barrage of emotions pummeled me in quick succession. Fear, panic, and above all, guilt.

You see, I hadn’t been very excited about this baby. I had thought I would be. That I was ready. That after having my first two only 18 months apart, a 22 month break from pregnancy would be sufficient to recharge my baby anticipation meter. I was wrong. I had been fighting frustration and borderline resentment for most of the pregnancy. I felt disconnected from the little life growing inside of me. And it didn’t help that my emotions were all over the place. Although, let’s be honest: they were mostly in an ornery, short-tempered place. I wasn’t much fun to be around, and I knew it.

Granted, it was a stressful time of life for us. We had just finished building our house completely from scratch and were barely moved in with lots of work yet to do. I spent my days chasing toddlers and changing diapers with one hand while holding a paint brush in the other, fighting nausea and fatigue along the way.

But none of that mattered when I saw the blood, and the chill of possibly losing my child crept its way up my arms and into my soul. Once I could breathe again, I called my mom, who is, sadly, no stranger to miscarriage, and she listened and talked and prayed and just generally did the things that good moms do when their daughters are hurting.

But I think we both knew what was happening.

That didn’t stop me from hoping, though. From praying and frantically shoving away the thought that I deserved this for not being excited enough about this baby. Because, surely there was no “this.” Pregnant women bled all the time during pregnancy. My midwife said as much when I called her, stumbling over my explanations and apologies for disturbing a day of grateful happiness with my mess.

For several hours after we hung up, I hunkered on the couch, trying to be as still as possible, as if, somehow, my lack of motion could hold my baby inside where it was safe and warm.

At first, it seemed to work. But then, then there was another trip to the bathroom and more blood. More nauseating fear.

My roll ingredients languished on the counter top, unmade and ignored. There would be no feast for us that Thanksgiving.

My midwife called to check on me again, and I told her the grim news. She offered to leave her own family feast to drive 40 minutes to the childbirth center and listen for a heartbeat. Clinging to hope, we agreed, thanking her effusively for her selflessness.

I’m not sure I breathed once as she ran the wand over and over my belly, to no avail. No familiar whump-up, whump-uh, whump-up emerged from the faint crackle of the Doppler signal.

I lay there, feeling numb as she described what I could expect in the upcoming hours.

I think I remember tears leaking out of my eyes, down my cheeks, and puddling in my ears, but I can’t be sure. Everything about that moment is blurry and strangely metallic.

The contractions began in earnest before we were even all the way home. I had to pause to let one subside as I dragged myself up the stairs. I know I cried then. Tears of sorrow and self-pity and anger. No one had ever told me that miscarriage could be a mini version of labor, except with no sweet, squishy babe at the end to make it all worth it. This was not supposed to happen.  It was Thanksgiving day, for the love of all things sacred! How was I supposed to be thankful for this?

I spent the next several hours surviving the process, mostly in the tub, pretending to read The Count of Monte Cristo, ignoring the pain and trying to ignore the impending moment when I would have to hold my tiny baby for the first and last time.

The only thing that kept the sobs at bay was a thought that Thalia had offered when I described how odd I’d felt throughout the pregnancy as well as some other unusual things I’d noticed. She had suggested the possibility that I might be looking at a blighted ovum, which meant that, although my body had been behaving as if it were pregnant, with heightened hormonal levels and a developing placenta and everything, there would be no actual baby.

In the end, when all was said and done, I think that’s exactly what happened. I never saw a baby, but I did experience the other symptoms, subtly different though they were, that Thalia had said to look for in this kind of miscarriage.

And, relieved as I was, I was also battered and exhausted. And sad. Sad that my body was broken. Sad that I wouldn’t get to meet that particular iteration of me and Shaun. Sad that the last 13 weeks had been wasted. Sad that Thanksgiving Day seemed destined to bear the taint of loss.

The thing is, with God, no sadness is truly wasted. He keeps count of our miseries, collects our tears in a bottle. It is we humans who shovel sorrow away by the double fistful, hoping to bury it beneath activity and sound and something, anything that will make it ache less. I know that sounds trite. And believe me, I would never have chosen to be pregnant for three months, only to endure a miscarriage and discover that my body had been misfiring all along. But I learned some things about myself that I needed to know. The experience stretched and reshaped me, forcing my gaze up from my own navel and outward towards the hurts of other women to whom I would have never related in some ways.

And three months later, after my body and heart had both had time to heal, I was genuinely thrilled and oh-so-grateful to find out that we were pregnant with Della. That was a pregnancy full of anticipation and joy and complete redemption of what had been lost.

She was my rainbow baby, and I was in love with her from conception.

Fast forward 4 years to this pregnancy–to the moment our sonogram technician swiped the wand across my 11-week pregnant belly, and I immediately said, “Did I just see what I thought I saw?”

And she said, “Goodness, girl. It’s twins again! Or at least it was.”

That last phrase filtered through my stunned thoughts as I squinted at the screen, straining to make out the second shape. But it was too faint, the mere shadow of a tiny babe.

Almost like that second rainbow I captured on my way home from the gym one day. (Did you see it?)

Again, I held my breath as the hunt for a heartbeat commenced. My prayers were a simple loop of: “Please, let him be okay.”

But, once again, there was silence. One baby we thought we knew who turned out to never have been at all. And one baby we knew nothing about who slipped away from us before we could ever wrap our hearts around his very possibility.

Honestly, the second time was less traumatic, both for my body and my heart (somehow, not knowing he existed in the first place made releasing him back to Jesus easier).

But it still hurt. It still tugged and pinched to think what his twin, who is kicking me as I type this, could have had (now that I’ve seen the bond that Evy and Nola share, I kind of think every singleton is missing out). What I could have had.

So, why do I tell you all of this now? (I certainly never planned to before this pregnancy).

I tell you because I know that it is hard for many of you to read about a woman who is effortlessly pregnant for the sixth time when you would give anything to see those double pink lines just once.

I tell you because of this verse: “Praise be to the God and Father of our Lord Jesus Christ, the Father of compassion and the God of all comfort, who comforts us in all our troubles, so that we can comfort those in any trouble with the comfort we ourselves receive from God.” (2 Corinthians 1:3-4)

I tell you so that, maybe, possibly, my story could comfort those in any trouble with comfort I myself received from God.  Those of you who extended such sweet words of congratulation in the midst of your own struggle to conceive. Those of you kept silent and fought the urge to throw your laptop across the room (I get that). Those of you who can relate to the horrible, nauseating stomach-drop when there’s blood on your underwear, and the Doppler does nothing but crackle.

My story is different than yours. But I still hear you. I see you. I’ve felt at least a tiny sliver of your pain. And I’m for you.

But, more importantly, Jesus is for you. Even on Thanksgiving Day when your bathtub water runs red or on a Monday morning when you’ve just tossed your 23rd negative pregnancy test in the trashcan, along with a fair bit of hopes and dreams.

“For I am convinced that neither death nor life, neither angels nor demons, neither miscarriage nor barrenness nor unexpected pregnancies when we don’t feel “ready” nor rebellious children nor anxious nights in the NICU nor stillborn births nor anything else in all creation will be able to separate us from the love of God that is in Christ Jesus our Lord.” (Romans 8:37-39, added paraphrasing, mine).

We don’t always know why we hurt, but we can know this with certainty: “I will see the goodness of the Lord in the land of the living. Wait for the Lord; be strong and take heart and wait for the Lord.” (Psalm 27:13).

If you’re struggling with miscarriage or infertility or feeling overwhelmed by lots of little kids or…whatever…I would be honored if you emailed me at:

As I’ve said many times before, I don’t have all the answers. But I know a God who does. And I would be happy to lift you up before Him in prayer. And if that whole “love of God in Christ Jesus” thing sounds confusing or foreign or too-good-to-be-true, I’d love to talk to about that too.

You probably have some processing to do, but in the words of the inimitable Joe Fox: “Meanwhile, I’m still here. Talk to me.”