On my birthday weekend, the last stop on our “way” back from Houston was actually a bit of detour to an outlet mall.

I had grand plans of getting some Christmas shopping done, since the idea of buying for myself at 30 + weeks pregnant was far from alluring. 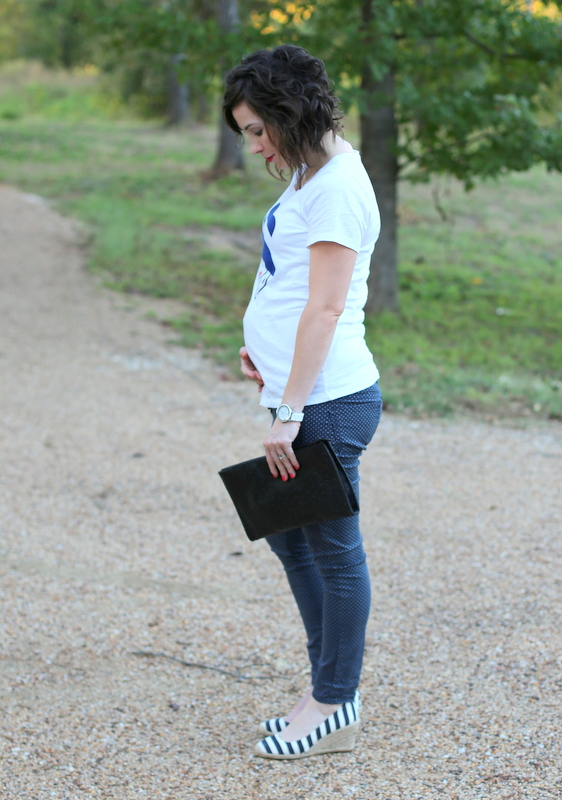 But the sales at all the kids’ stores were less than stellar, so we basically walked the entire loop of the mall, stopping into a few stores here and there, and then vamoosed. 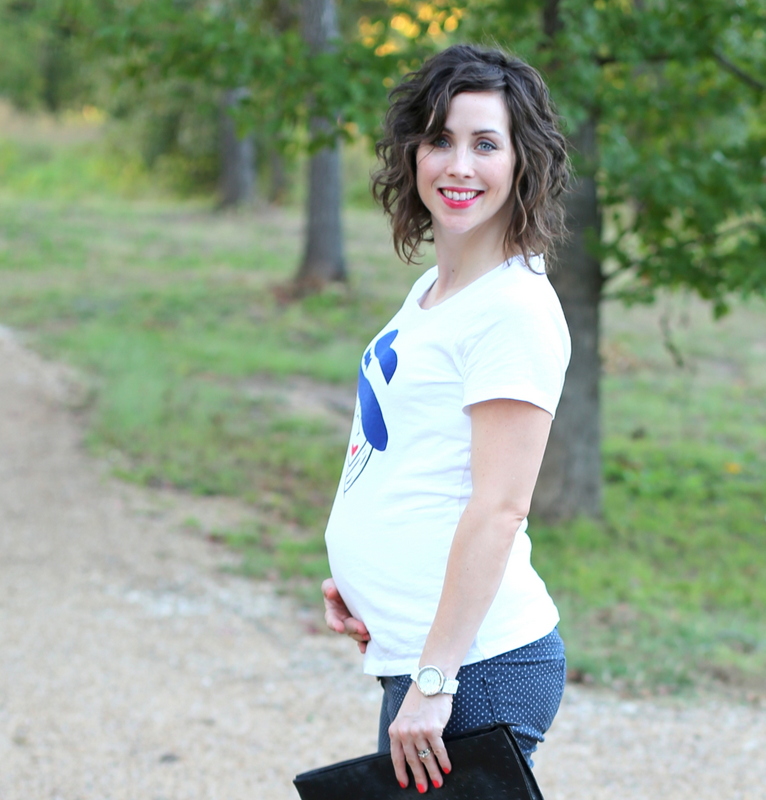 If that sounds like a rather lackluster shopping trip…I suppose it was…although I’ll take an excuse to wander around, sifting through sales racks and holding my husband’s hand any day.

The one notable exception was the Parisian Lady tee. 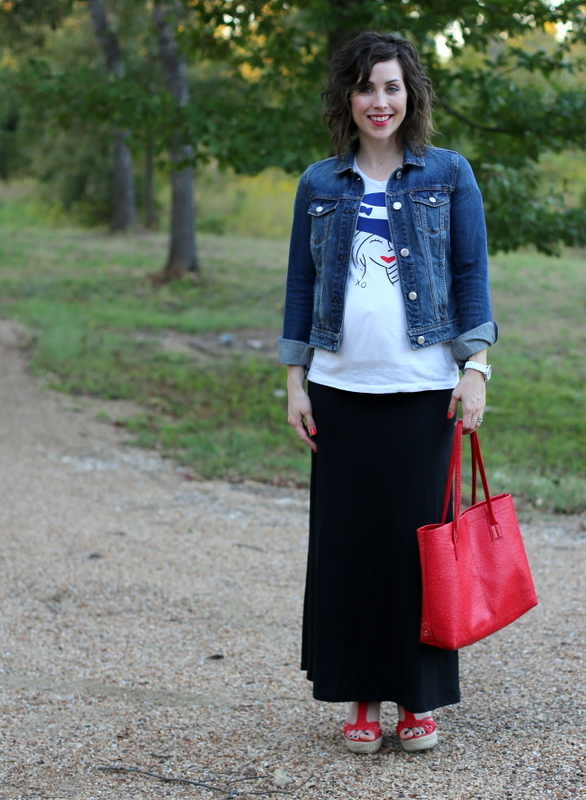 I spotted this fun graphic tee on jcrewfactory.com (the online version of the outlet store) a while back for $17.99 and really loved its cheerful, cheeky style. But, with shipping being $5 and my having no idea about the quality or fit, I wasn’t quite willing to shell out $20+ for a t-shirt I couldn’t easily return.

Turns out, they had one Parisian Lady left in the J. Crew outlet at this mall, and it was my size (or close enough, given the belly). It was $29.99, though, and the store guy I talked to said they didn’t match online pricing. 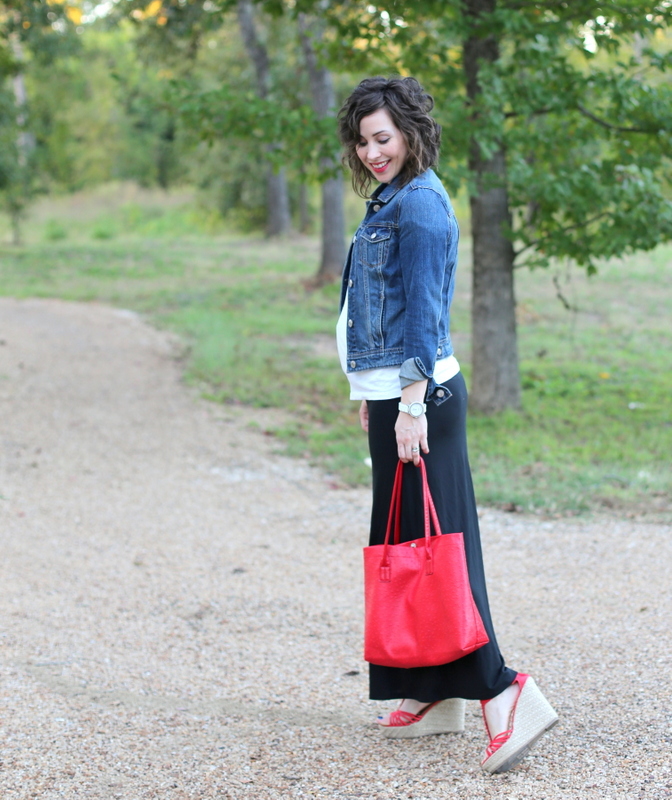 HOWEVER. The outlet store had an extra 50% off of sale prices dealio going, so I decided to take the plunge. Even better, they had one other shirt that I had been eyeing in just my size–also on sale with the extra 50% off (and this one had been over $30 online, so there was no way I was going for it without being able to try it on). That one ended up being a winner too, and we even threw some shorts for Shaun into the mix, which brought our total to a whopping 3 items.

When we got to the register, somehow it came up that it was my birthday (Shaun said it, not me), and the guy ringing up our purchases congratulated me. And then I mentioned to him that I’d signed up for the J. Crew Factory birthday rewards (which was supposed to give you an extra 20% off your entire purchase during your birthday month) but had never received the promised email. I just kind of trailed off because he had already made a point that they were a separate entity from the online store. I figured he would probably say there was nothing he could do.

To which I replied by doing cartwheels around the bin of striped ties next to me. No small feat with this belly, I tell you.

I haven’t been able to do a cartwheel since 4th grade.

I did thank him profusely for his kindness, though. 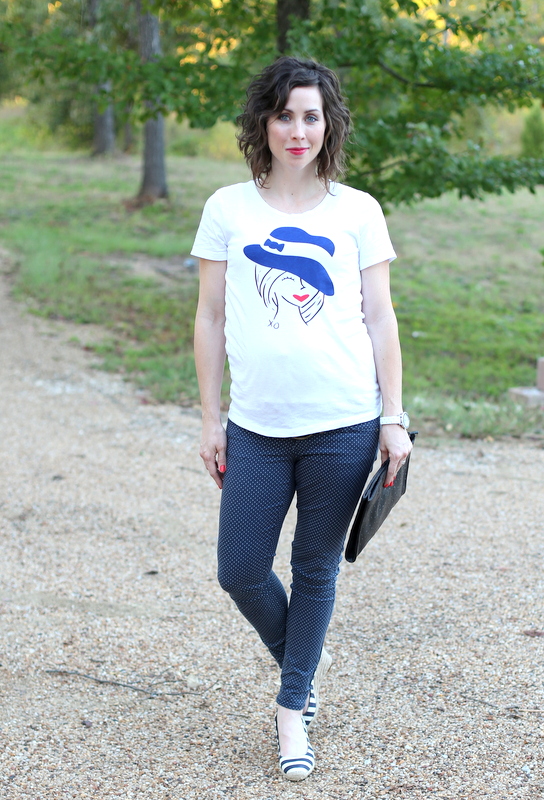 And then I wore my Parisian Lady tee with polka dot skinnies (from Old Navy a while back), striped wedges (from Target last spring), and a smile almost as smug as the Parisian lady’s herself.

I think we all know the moral of this story.

Always, ALWAYS ask for a better price if there’s any justifiable reason to do so. (I’m not quite brazen enough to wander up with a full-priced dress and ask if I can have it for 50% off just because. But I’m close).

Ever gotten special treatment (doesn’t have to be shopping related) just because it was your birthday? I feel like there have been other instances of this that I can’t remember at the moment. But getting two shirts I’d been wanting on my birthday for way less than the price of one online made this bargain-loving chick quite happy.

2 thoughts on “The Parisian Lady Tee”