On the one hand, it seems strange that I’m already in the 30’s of this pregnancy. On the other, it feels like I’ve been pregnant for at least a year already. 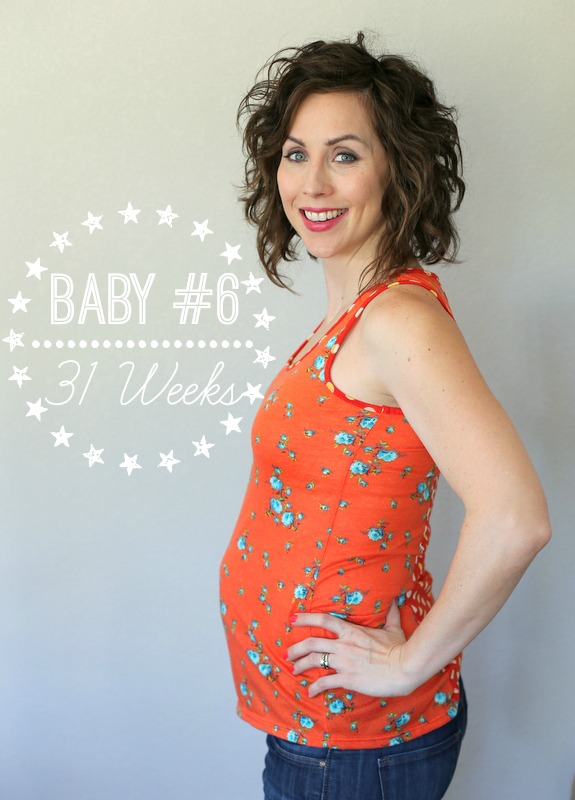 Pretty sure I’ve felt this way for the last 3 pregnancies, although the twins’ was different enough that each new stage was a bit of an adventure.

And, should the Lord bless us with any more kids, I have a feeling I will start feeling “done” with being pregnant earlier and earlier. And that, right there, folks, is how I really feel. Gimme all the babies! Just, could we hurry this pregnancy business along, please?

Of course, the second I think, “Man, oh man, I would have this kid rightthisverysecond if he were actually fully cooked”…

And then, I’m all: hope you’re comfy in there, little dude, because Mama can’t deal with that yet. In fact, after 4 natural deliveries (which produced 5 kids because of the twins, obviously), I literally can’t think about the details of labor with any level of objectivity at all. It makes me queasy. And panicky.

In fact, I find it absolutely fascinating that God designed us so that, by the time we get to the end, we are so genuinely done, desperate to see our little sweetie, and full of “get-this-kid-out-of-me-NOW-I-don’t-care-what-it-takes” angst that we’re spazzing out, Cuba-Gooding-Jr.-style, hollering, “Show. me. the. PAIN!”

I posted something similar to this sentiment to Instagram/Facebook a while back (somewhere around 24 weeks, which was the first week that I started getting that whole: “Urgh. Can I please be done, already?” feeling).

I got some amens, some “you should not be wishing for a preemie baby” (totally not what I was saying), and perhaps most surprisingly of all, some: “I would give birth again in a heartbeat. It was AWESOME!”

(For some reason, I keep hearing Inigo Montoya saying: “You keep using that word. I don’t think it means what you think it means”).

Now, don’t get me wrong. My labors aren’t bad. They’re long. And frustrating. (Have you read the twins’ birth story?). But the really, truly excruciating part is “only” about 5 hours long, and I’ve yet to have any complications.

Those 5 hours, though. Those are the ones I have to mentally avoid.

Praise Jesus for squishy little babes that make it all worth it in the end, amen?

ANYWAY, so I guess that gives you a bit of an overview about my current mental state, which is a not-so-straightforward: ready (if he were ready)/not ready (even if he were).

As far as the rest…

Cravings: Other than carbonation, I really don’t have any of these.Not consistently. My food definitely develops a traffic jam somewhere in the region of my ribcage when I eat. Which, of course, means that I fill up quickly, only to feel hungry 20 minutes later. Which, of course, means that I’m munching on something small practically all day long.

Weight gain: No clue. I haven’t stepped on the scale since 27 weeks, and I don’t plan to (so grateful for a midwife who doesn’t make me a long as I’m growing). But I do feel like things have leveled out a bit after a big jump back in the early 20’s.

Exercise: I feel SO much better than I did a month ago. My round ligament pain (that searing burn that runs from your obliques down to your inner thighs on both sides) has eased up considerably, and I can pretty much pop right up from my bench when I’m doing chest press for BODYPUMP, even though my belly is bigger. I even tried some jump-moves in BODYCOMBAT last week and discovered that, outside of a sudden inspiration to invent Depends–the Exercise Version, I could actually get some air, and it felt fine (and looked absolutely ridiculously, I’m sure).

Pregnancy Side Effects: Midday exhaustion is my nemesis. Also, I’ve been battling more moodiness and “down-ness” than usual, but over all, the hormones are relatively tame. (Although…this is the first pregnancy that I’ve cried over spilled salad). I know I already said this, but the Collinsonia Root and MK-2 supplement I’m taking for the varicose veins in my right leg really do seem to make a difference. I didn’t take them for 3 straight days because I forgot to take them to Houston with us for my birthday, and by day 3, my leg was aching. Within two days of resuming the supplements, though, I felt great.

Energy: Totally depends on the day. But I wouldn’t mind having more than I do, pretty much all the time. (Not sure this has as much to do with pregnancy as homeschooling and chasing 2 toddlers who think that life is not worth living unless they change into a different outfit–doesn’t matter whose–14 times an hour).

And now we get to the part where I discuss pregnancy math: I’ve run into a whole rash of folks lately who do not understand the correlation between months and weeks in pregnancy. (Which, admittedly, can be a bit confusing). For example, I have an acquaintance who is due only a few days before I am. And yet, at 22 weeks, she called herself 6-months-pregnant. And then a few weeks ago, she mentioned being “almost 8 months.” Which was a real head-scratcher for me since we’re due at the same time, and I knew I had a few weeks to go until I even made it to 7 months.

Basically, the common misconception is that a month = 4 weeks. But that’s actually only true for the month of February (which is 28 days), which means that the other 11 months give you 2-3 “extra” days per month. Sounds like a throw-away, right? But when you multiply 2 X 9 (months of pregnancy), you get 18. Throw in January, March, May, August, July, October, and December, and you’ve potentially got another 7 “extra” days.  That’s 3 1/2 weeks of “extra” time you’re not even counting.

So, if you consider yourself 8 months pregnant when you’re 32 weeks along (because 32 weeks divided by 4 = 8), then you’re in for a bit of a surprise when 4 weeks later, you’ve still got 4 weeks to go!

No, you’re not pregnant for 10 months. Months just don’t generally happen to be exactly 28 weeks long, and those “extra” days add up in a sneaky way.

If you’ve made it this far into our math lesson today and are just burning to know (hi, all two of you that are still here!), since pregnancy is 9 full months, that makes each trimester right at 13 weeks and 3 days long. So…

I could go into how, for 2 of those 40 weeks, you’re not even technically pregnant, but I think I’ve geeked out on you guys for long enough, so I’ll quit.

ANYhoo, the long and the short of it is that this little guy (and CHRISTMAS!) will be here before I even have time to process either, I’m sure, so I’m just trying to take this pregnancy/life one day at a time with Jesus by my side.

Which, yes, should be my plan all the time, pregnant or not.

Do you guys dread labor too? Do you go the epidural route? Home birth? Hospital all the way? C-section? While I go the home birth route and love it, I’m all for any choice that is the safest/best for each woman that is birthing her own baby. I have friends who want the epidural waiting in the parking lot of the hospital, some who do natural births in the hospital, some who do home-births, some who have planned C-sections. I even know a few folks who get a little bit of back pain and barely realize what’s going on before–hello!–the baby is crowning!(These folks and I cannot truly be friends; my jealousy is way too strong :)).

Do you count by weeks or months? Or just not worry about it all? In a completely myopic episode of everyone-must-think-like-I-do, I was genuinely shocked one day when I discovered that some people don’t have much of a clue how far along they are and don’t bother about it. (Seems smart, in a lot of ways, but I can’t seem to turn my mental weeks-pregnant calculator off).