First of all, can I just say a big, “Awwww, thanks!” for all of your sweet comments on my “new” light and bright kitchen?

I’ve said it before, and I’ll just keep right on saying it: Y’all are NICE!

I am completely honest when I say that I love how it turned out, and it makes me really happy, not only to have such a cheerful space to do life in (I really do spend about 75% of my at-home time in the kitchen between cooking/cleaning/projecting/homeschooling/making snacks/eating meals, etc.), but just to have every last detail of the vision that I had in my head out of my noggin and on my walls/shelves.

(Or, at least that was true until the “O” from my ENJOY sign came crashing down to the floor during family Bible reading yesterday morning and shattered into a gazillion tiny fragments; you know you’re a mama-blogger when your knee-jerk thoughts are a) Praise Jesus there wasn’t a baby underneath it and b) Praise Jesus I had already taken pictures of that because it probably won’t get replaced for a good long while and c) somebody needs to go sweep that up!

But even as genuine as that happiness is, I have to admit that, as  I was editing my pictures, another person’s beautiful kitchen popped up in my IG feed, and my knee-jerk reaction to that was to think something mopey like, “Mine’s not nearly as polished and awesome as hers.”

I know we’ve all heard this quote a ton, but…Comparison really IS the thief of joy.

I get a lot of joy from pouring my heart and soul into the heart and soul of my home. And still, a moment of viewing someone else’s version of kitchen happiness is able to (at least momentarily) tarnish that??? Ridiculous.

I would love to just blame it on preggo hormones, but I think it’s more of a human nature thing–a finding-your-worth-in-your-works instead of the-One-who-works-all-things-together-for-good kind of thing.

ANYhoo, I say all of that to assure you that your feedback–and above all the repeated, “It looks like you!” sentiment–was such a helpful reaffirmation of what I already know to be true: God created us all with unique talents and tastes, and while we can certainly appreciate someone else’s talents and tastes, the second we cross the line into coveting them, we’re not going to be content with our own anymore. And that’s just wrong.

So, yeah. Thanks for helping to restore some much-needed perspective.

And now on to the actual purpose of this post.

And that would be introducing you to this pretty, who had already caught several of your eyes from Monday’s post. 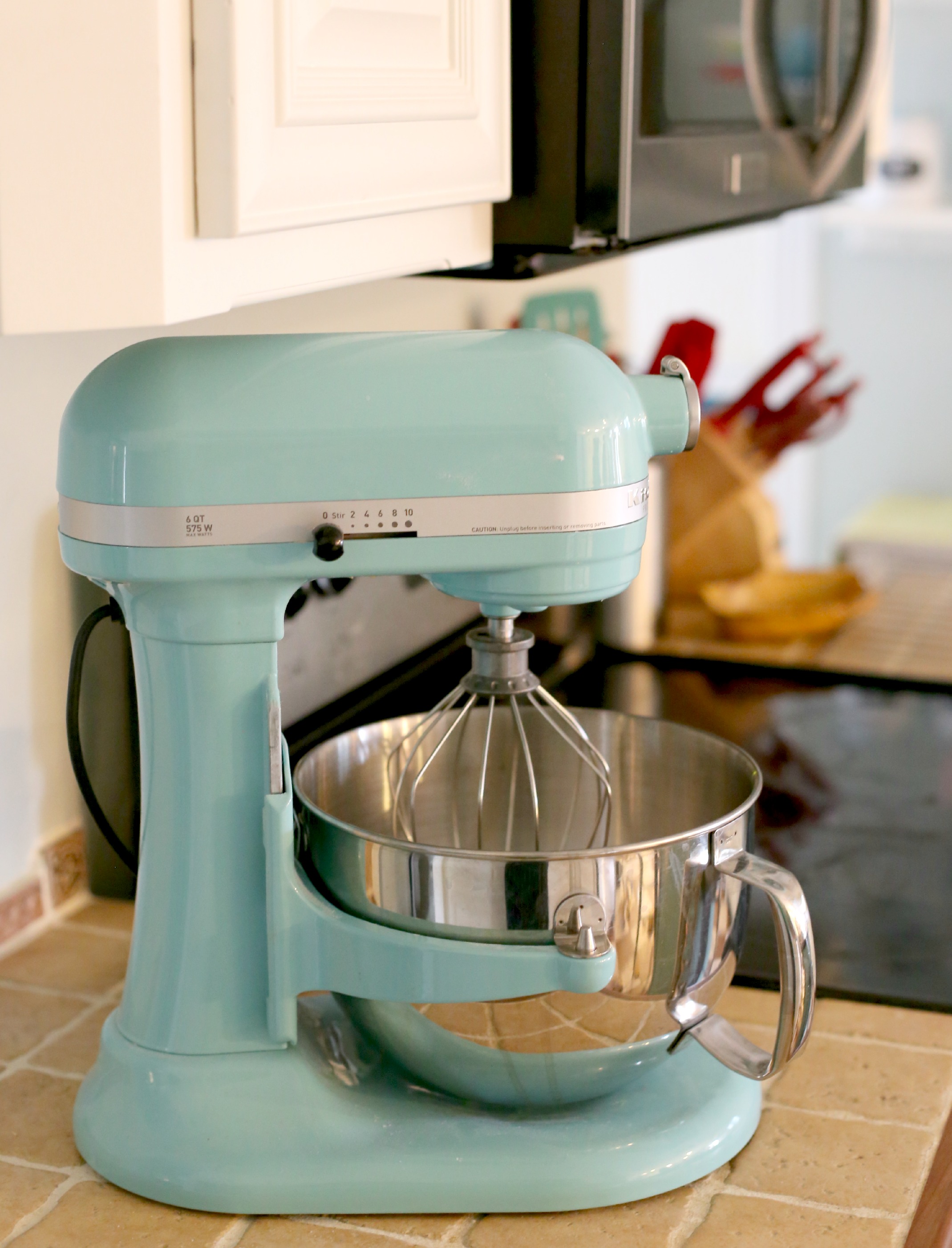 Meet Audrey (yes, as in Breakfast at Tiffany’s…Tiffany blue…and all that). 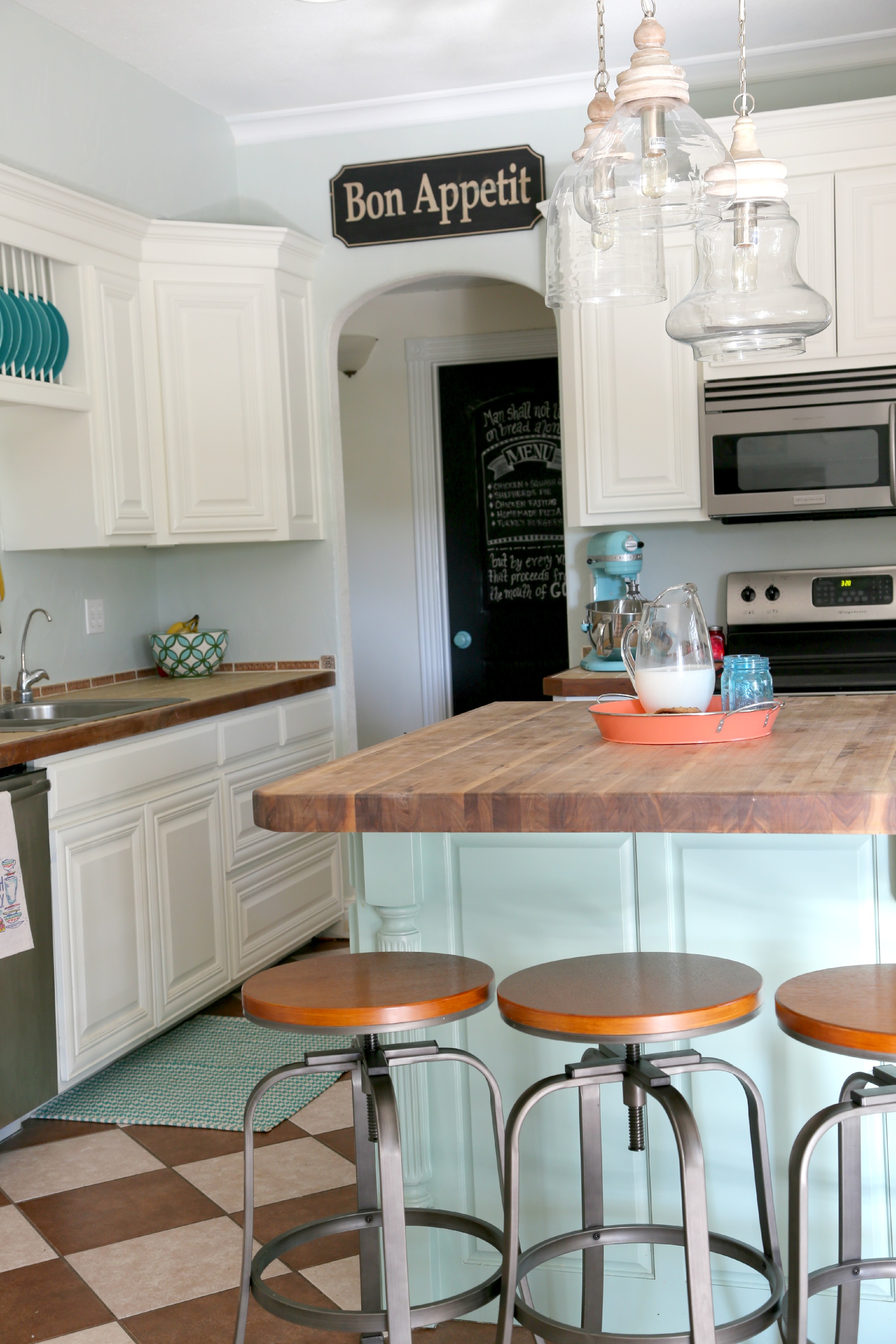 {See her hiding back there all being all demure?}

Of course, since I love her so much, I am definitely hoping that she never has a run-in with my former kitchen BFF, Penelope, her scarlet predecessor, who got unceremoniously carted off by a total stranger following a parking lot rendezvous in which cold, hard cash changed hands. (I promise this is not how I treat my real-life pals).

But, here’s the thing: as much as I loved ol’ Penny, her sheer redness just didn’t jive any longer with the lighter/brighter vibe I was going for.

So, my options were to a) paint her myself (which would not have gone well), b) have her repainted by an autobody shop (apparently, they’ve been known to do such things and, while not cheap, it’s usually less than buying new), or c) sell her and buy a new one in my preferred color choice.

Since I got her for such a great deal brand new 5 years ago, I was pretty sure I could get at least all of my money back, which made the swap a bit of no-brainer.

Turns out, I was right. I actually made money selling her used (and without asking an exorbitant price, either) and then put that fundage toward the purchase of pretty lil’ Audrey, who just so happened to be on major sale (I did a lot of research and couldn’t find a better deal than this site offered), with a coupon code AND a $50 factory rebate.

As it turns out (and don’t tell Penelope), Audrey is more than just another pretty face. She’s actually quieter and runs more smoothly than Penny (who definitely got the job done and had no actual “problems” but was just a little bit on the noisier/rougher side, in general…which I would have never known before I got Audrey).  I don’t know if I just lucked out or if Kitchenaid actually upgraded their design.

But I do know this: Audrey and I are very happy together.

Do you have a Kitchenaid mixer? If so, how long have you had it, what color is it, and–most importantly of all–what is its name? I guess you already know all of my answers.  I don’t see myself getting another one any time soon (probably never), but I definitely wouldn’t complain if I won one of those fancy, painted flowery ones that the Pioneer Woman gives away!