I don’t know about you guys, but pretty much any time I see a room reveal I really like, I end up wondering where someone found such-and-such. Of course, it doesn’t always (in fact, rarely) means that I rush off and buy the same thing, but in some cases, seeing something (like the Target stools I ended up getting for the island) in someone else’s actual house is the little push I need to go for a purchase.

So, with that in mind, I’ve rounded up as many sources as I thought might be relevant, just in case you guys were wondering (in some cases, because I tend to buy things on maaaaajor sale or thrifted, they won’t help much because they’re sold out, etc., but at least you’ll know not to look for them). Oh, and if it’s not labeled, feel free to ask because I have preggo brain and may have just forgotten, but most likely it’s because it was such a random purchase that it could never be duplicated. 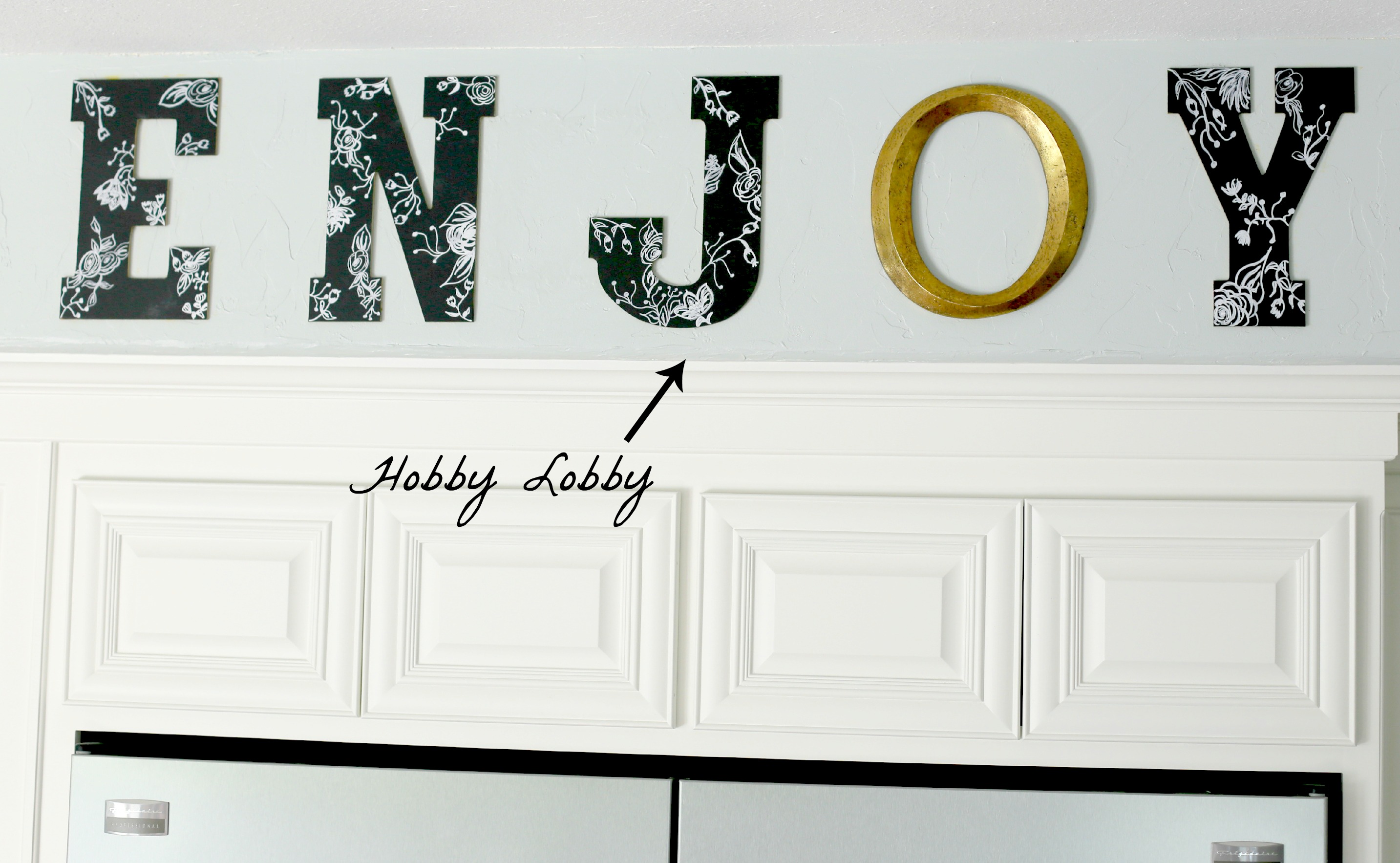 I might have had to paint them three times to finally get them just how I liked them, but these super-cheapy (maybe $2ish each) wooden letters from Hobby Lobby definitely work great for a large scale impact on the wall, not your wall-et (see how I did that?). (I scored the gold O there too on major clearance forever ago for $2, but it has since fallen off the wall and smashed to smithereens, more’s the pity. They do regularly stock both the gold and wooden letters, though).

In case you’re wondering, I painted the wooden letters with chalkboard paint (I could have sprayed them, but they were already stuck to the wall with Command strips since they started out a different color, so I used a brush) and then free-handed some chalk pen flowers onto them (I used the Bistro brand of chalk pen but only because it’s what I had; not particularly loyal to one brand of these). 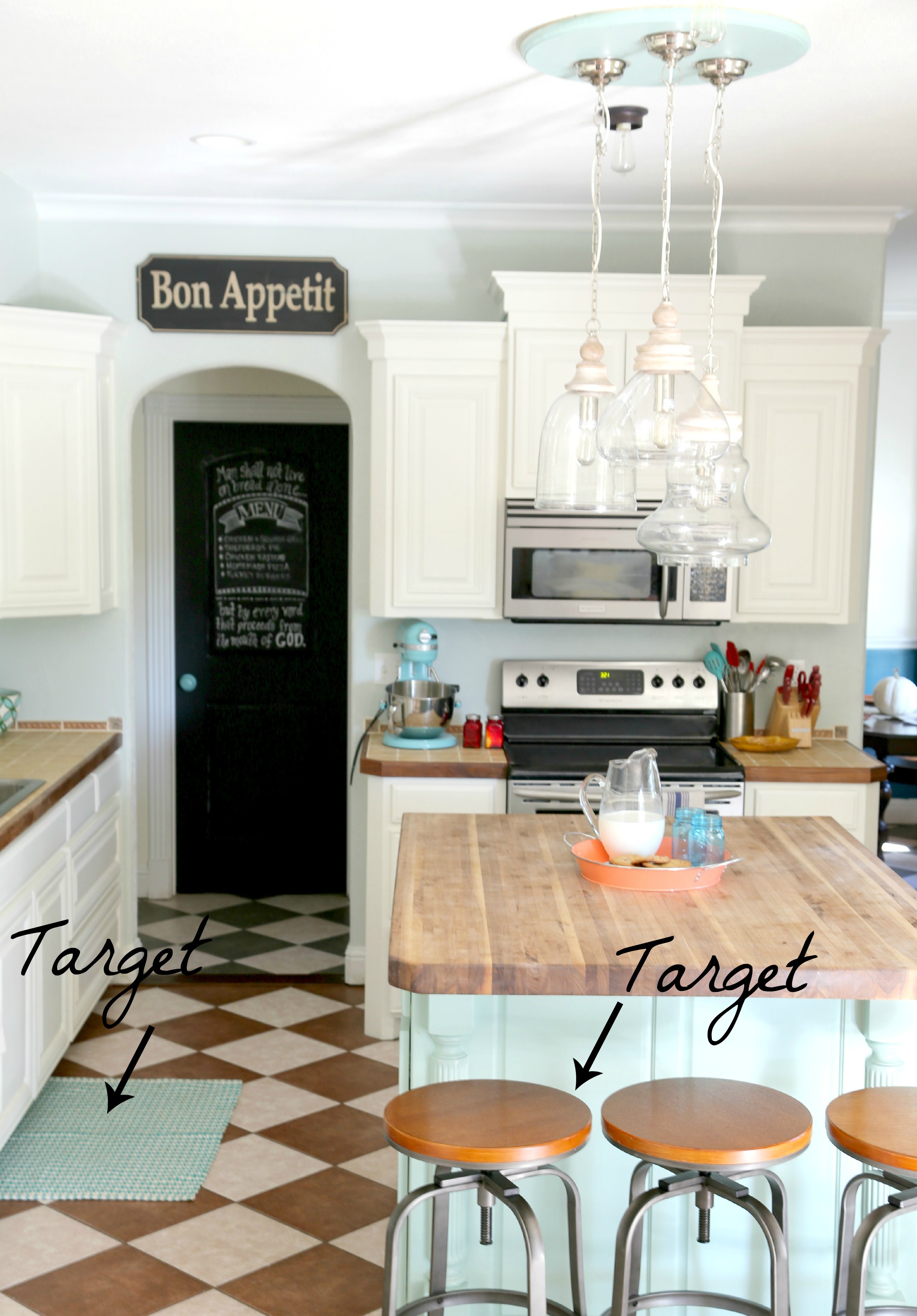 I bought 3 of those industrial bar stools from Target online after searching high and low for the best price + reviews (and, yes, after seeing them in another blogger’s kitchen reveal post), and I really like them. They are very sturdy, and the seats are super wide, which makes me feel safe to put even the twins on them. They come in several finishes, and I wanted mine to mix and match with my other industrial stools (that I scored at Sam’s for a steal of $20 each), so I chose pewter.

I couldn’t find the green houndstooth kitchen rug at Target online, but I bought it on sale not too long ago, so you might be able to still find it in stores. 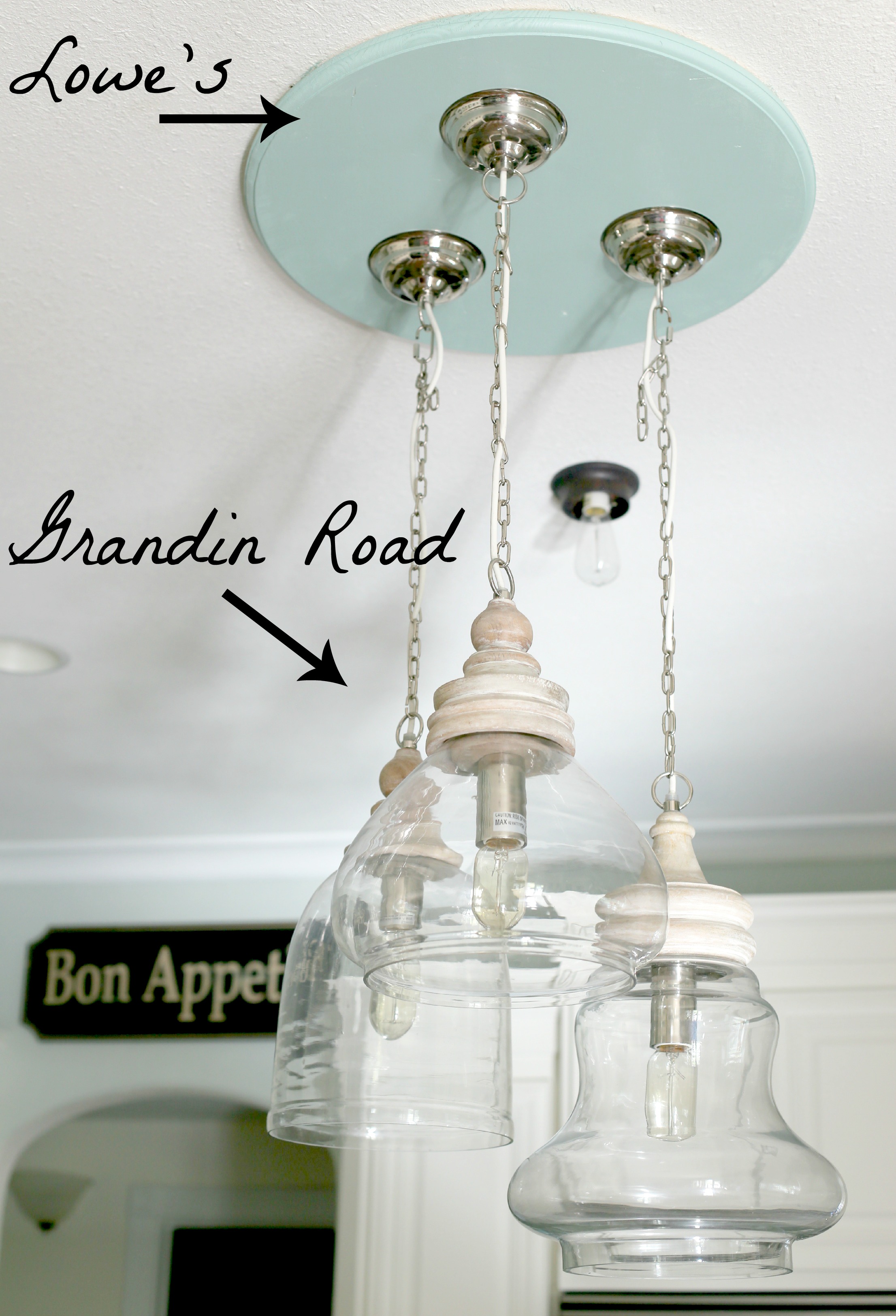 All the links you need for these lights are in this post that I wrote when we first got them. In it, I mentioned that one of the lights had a chip and that I was trying to decide whether to send it back. Well, then we noticed another (even smaller) chip in second light, so I called Grandin Road customer service, which basically resulted in a, “Send them back to us using the prepaid label, and we’ll refund you,” reply. I sat on it for a little longer, and then called back another day, which turned out a little better. That CS agent sent me replacement lights with free expedited shipping (she charged me again for the lights, with the understanding that when they received the ones I was returning, I would be refunded). I was pretty okay with the outcome until I realized that the “prepaid label” was actually on my dime and would subtract $9 from my refund for each light I returned. And this after I very specifically asked the CS agent if I would be receiving complimentary return shipping (her reponse: “there’s a prepaid label included,” which, while technically true, was definitely meant to give me the impression that it was prepaid by them, not me).

Anyhoo, when I realized the way it worked, I included a note with my return asking for a full refund of all charges, including shipping, because the flaw in the lights had been their bad.

But it just now occurs to me that, while I received email confirmations of my return/refunds, they didn’t itemize the amount returned. So, I’m not sure if they charged me for shipping or not.

ANYhoo, I didn’t really intend to get into all of that except that I felt like just saying that these lights are awesome doesn’t tell the whole story.

So, the whole story is this: these light are awesome. They’re beautiful, huge, and a really great deal compared to anything else I could find with their look.

BUT, the glass is not super-high quality. Even the replacements they sent had a few small bubble/flaws, which, since they weren’t all-out cracks or chips, I decided I could live with.

Just be warned that, if you do order these and receive a blemished one, their policy is to charge you for return shipping, and you will have to specifically request not to be charged it (with unknown results at this point) to get around that.

OH! And as far as hanging them in a cluster like we did…weeeeeeellll, that could stand to have a blog post all its own. But the short version is that we bought that wooden medallion from Lowe’s to hide the hole my husband had to cut in the middle of our ceiling to pull enough wires from the right spots to hang them all together. It might not be the most elegant solution ever, and it was definitely not a super-easy process (he is nodding emphatically right now), but I am really happy with how everything turned out in the end. If you have more specific questions about hanging them, email me at blogabbie{at}gmail{dot}com, and I’ll forward it to my husband. 😉 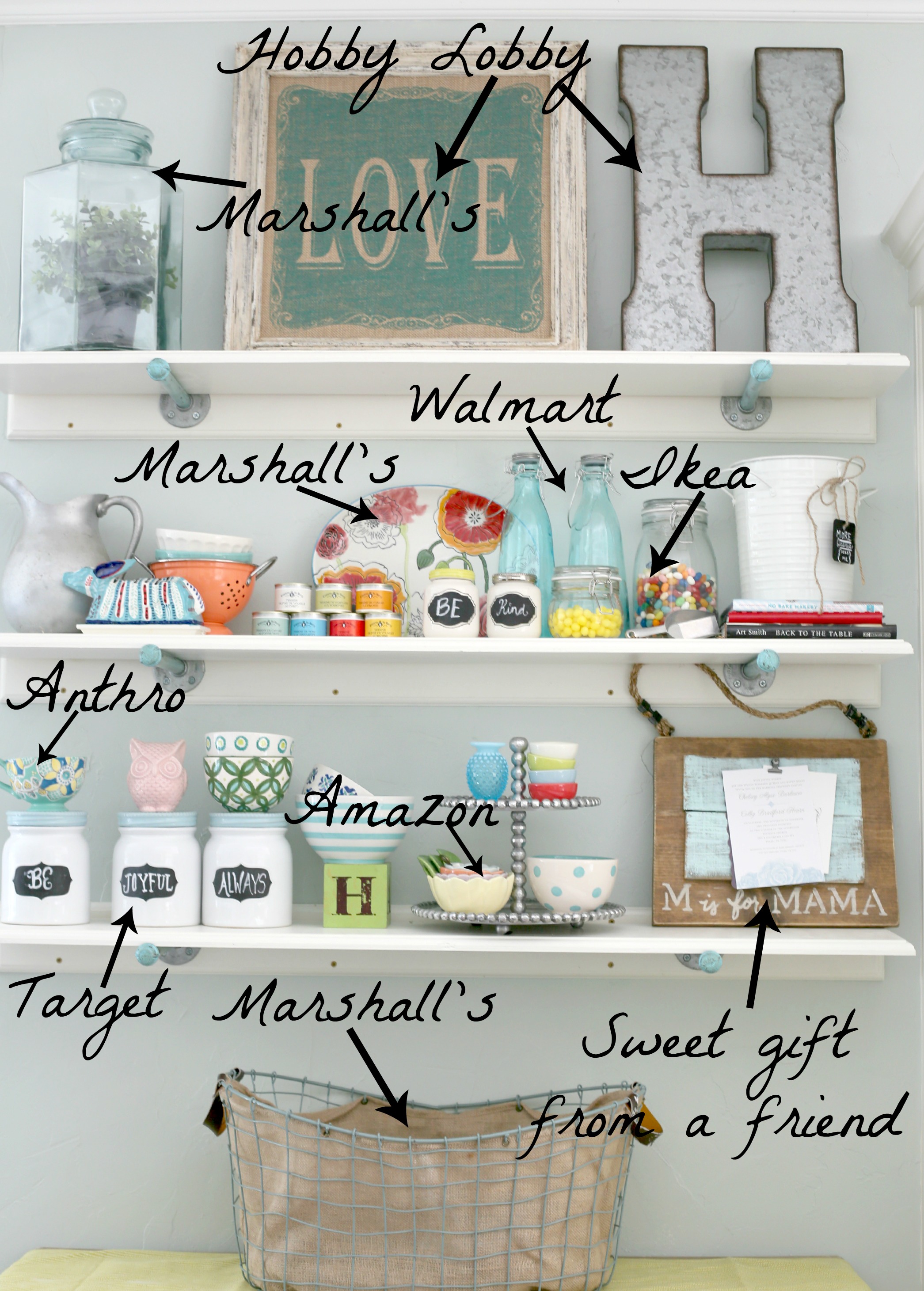 About the only things that you’re likely to be able to duplicate from all of the randomness I have on these shelves would the bottom left cup from Anthro, the pretty aqua bottles from Walmart, and the top middle “Love” sign + zinc letter (both from Hobby Lobby, both 50% off).

(I could also hook you up with the person who made my “M is for Mama” clipboard sign if you have any interest in a custom version for yourself or a gift. Again, just email me).

All of the bowls, I have collected over time from Marshall’s, Ross, or Hobby Lobby.

I will say, though, that quite a few people ask about those chalkboard canisters on the bottom left, which I got at Target several years back but which are available in various sizes and colors at both Michael’s and Hobby Lobby right now. 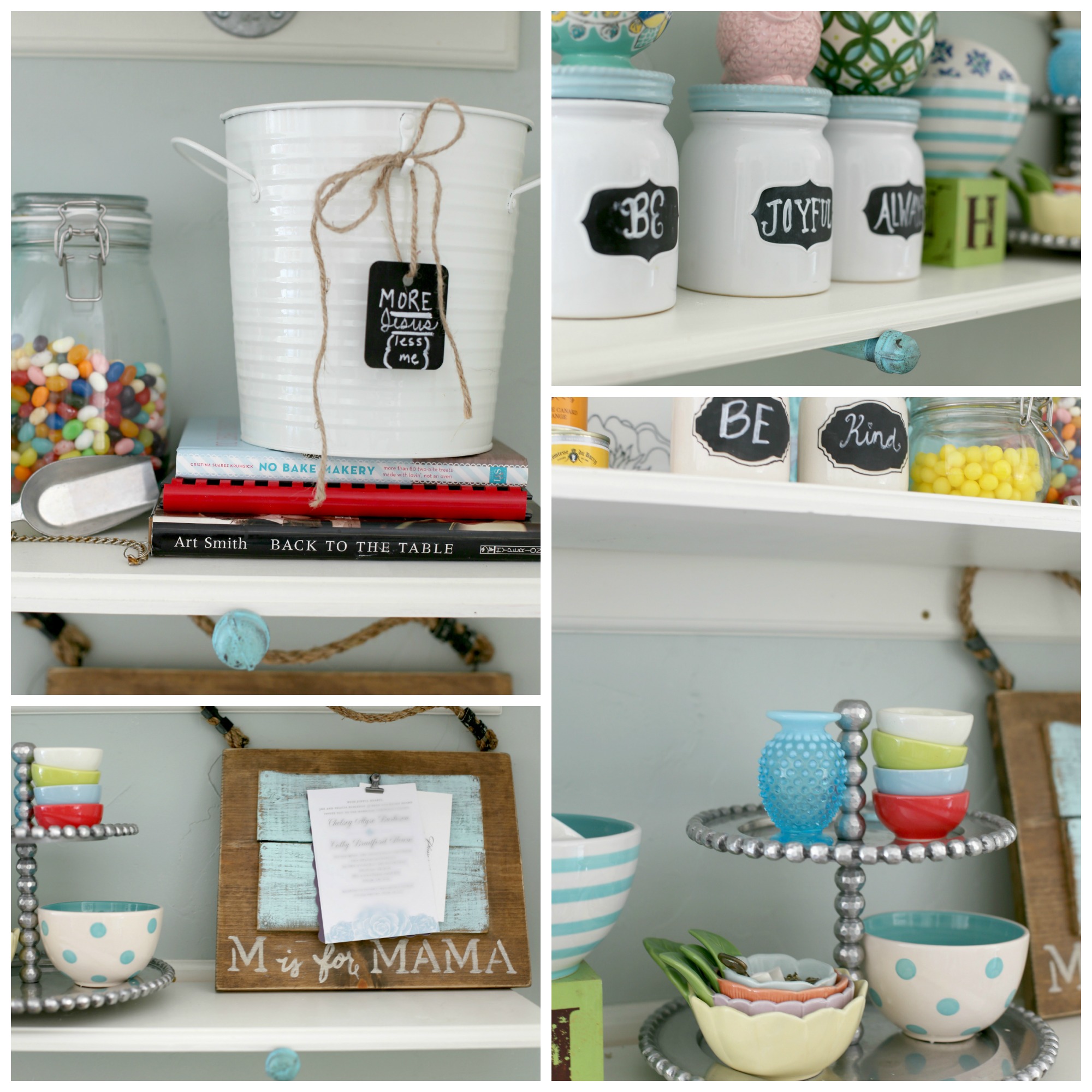 I will also say that I’m planning on showing you guys how we made the pipe shelving. Buuuuuutttt, I just don’t know how soon I’ll get around to that. 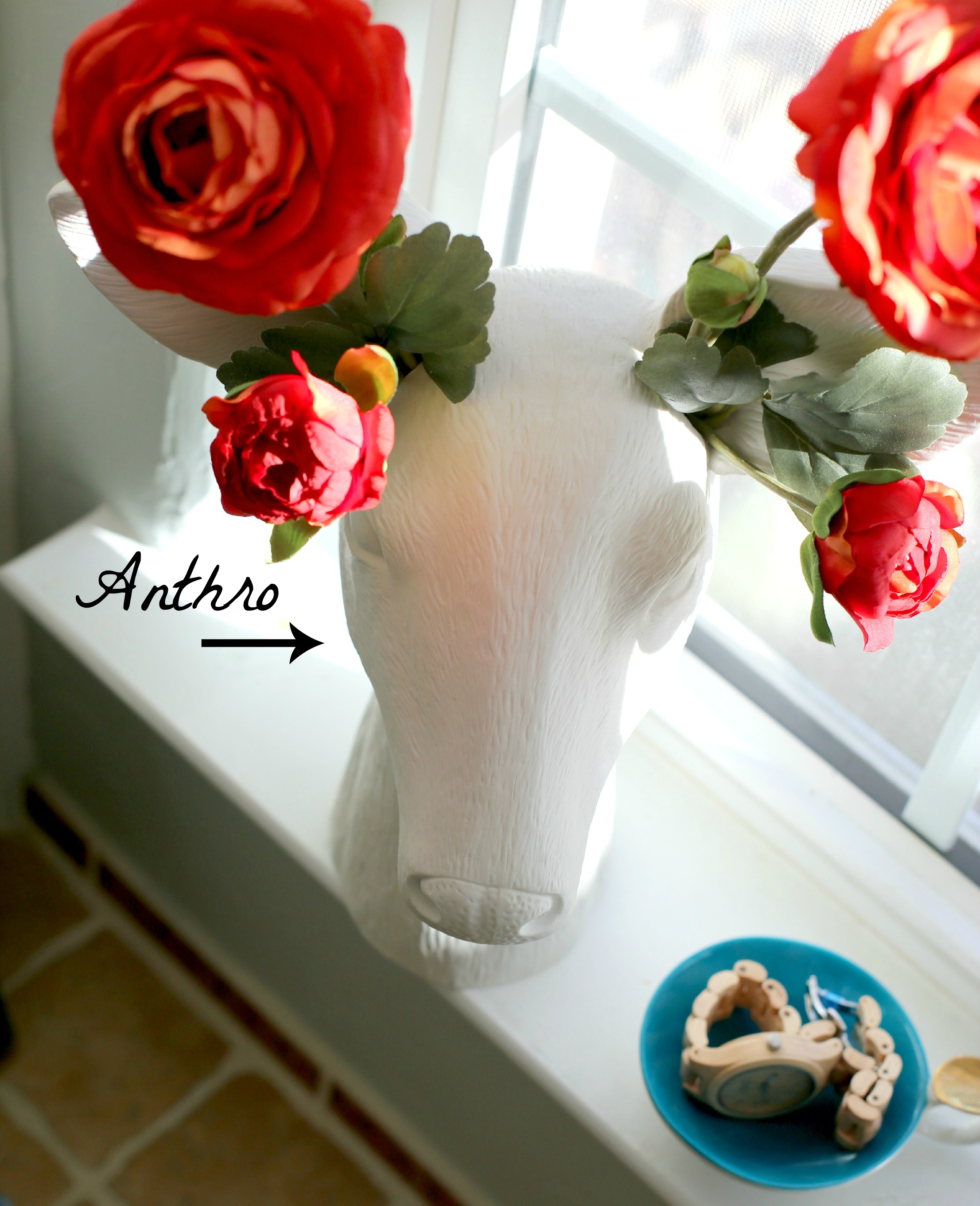 Meet Fiona, my deer friend (ha, ha. I scored her on sale from Anthro online for only $15, which I thought was a smokin’ hot deal, considering that I would have easily paid that much at Marshall’s (she’s pretty big). She has since sold out. I’m sorry. 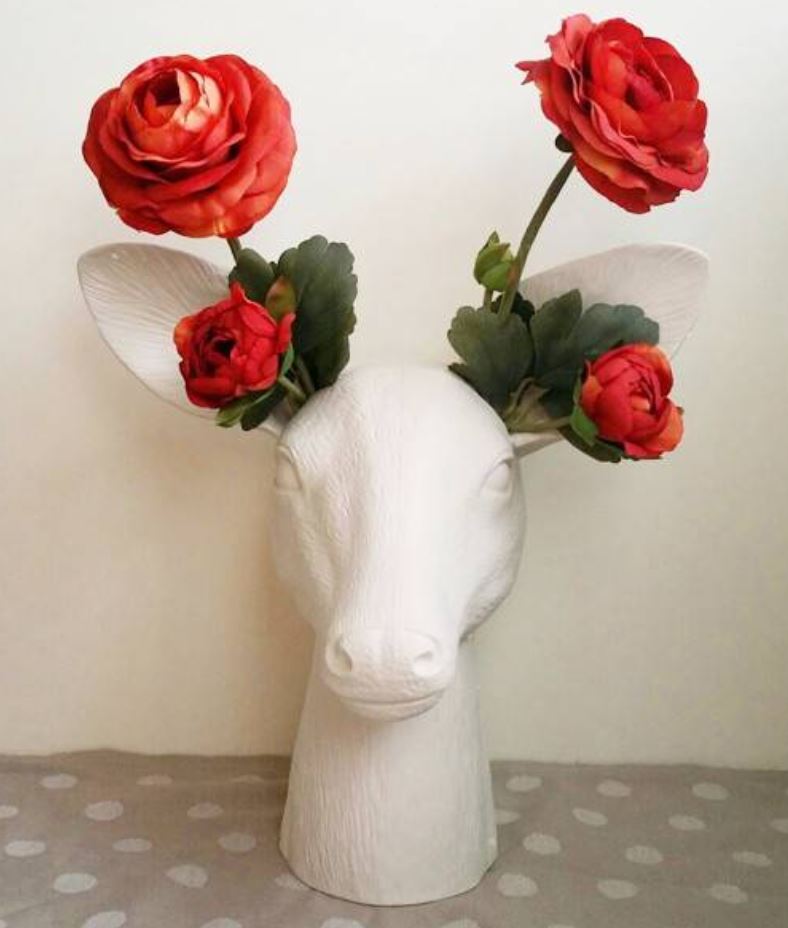 (I posted this shot to instagram with a call for name suggestions and got a much bigger response than I expected, so apparently, I wasn’t the only one who thought she was pretty sweet!).

Oh, and since I didn’t actually show you a closeup of this behind-the-sink collage in my first post… 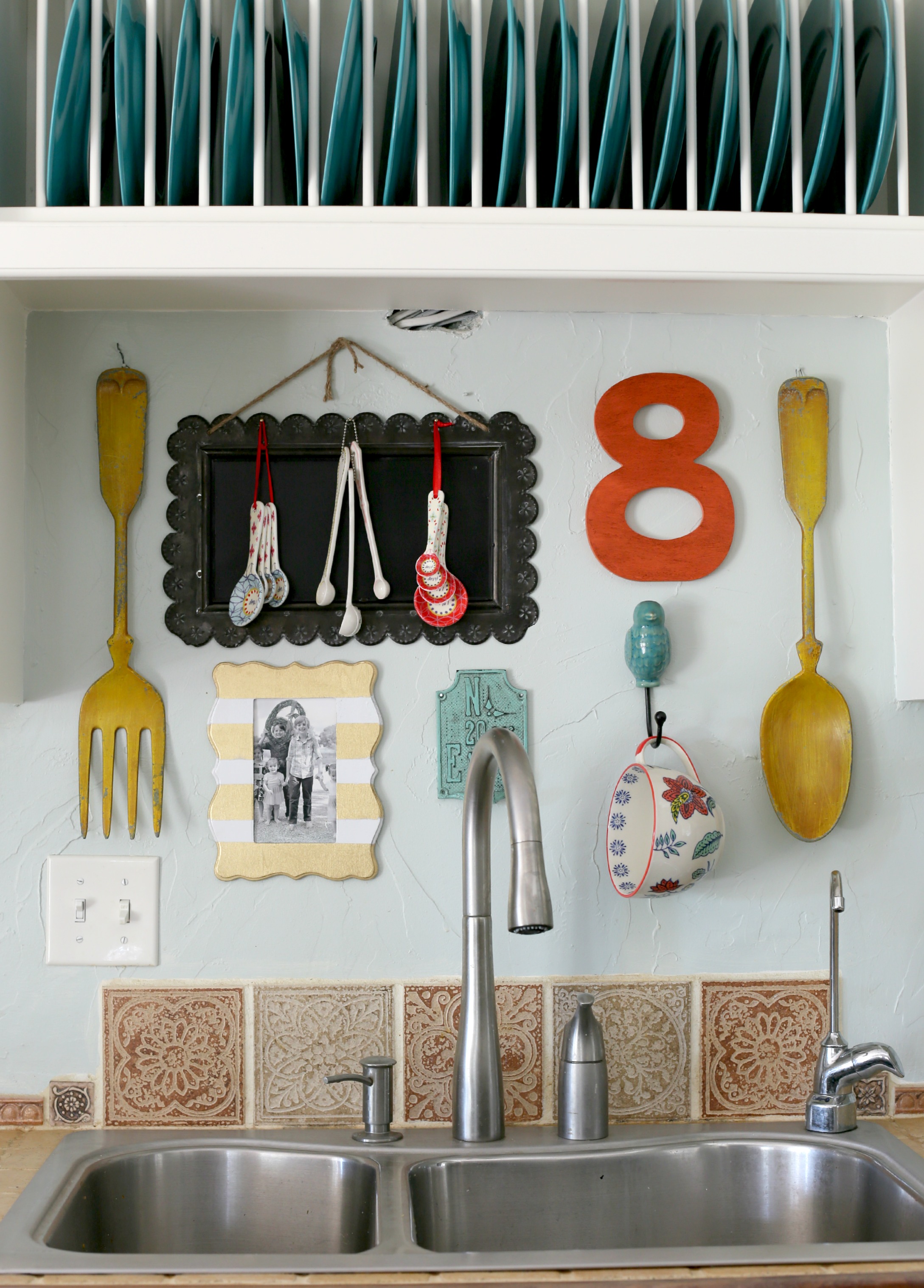 As far as sources, if you look at the pic above, my teal plates are from Pier 1, and the rest are listed below. 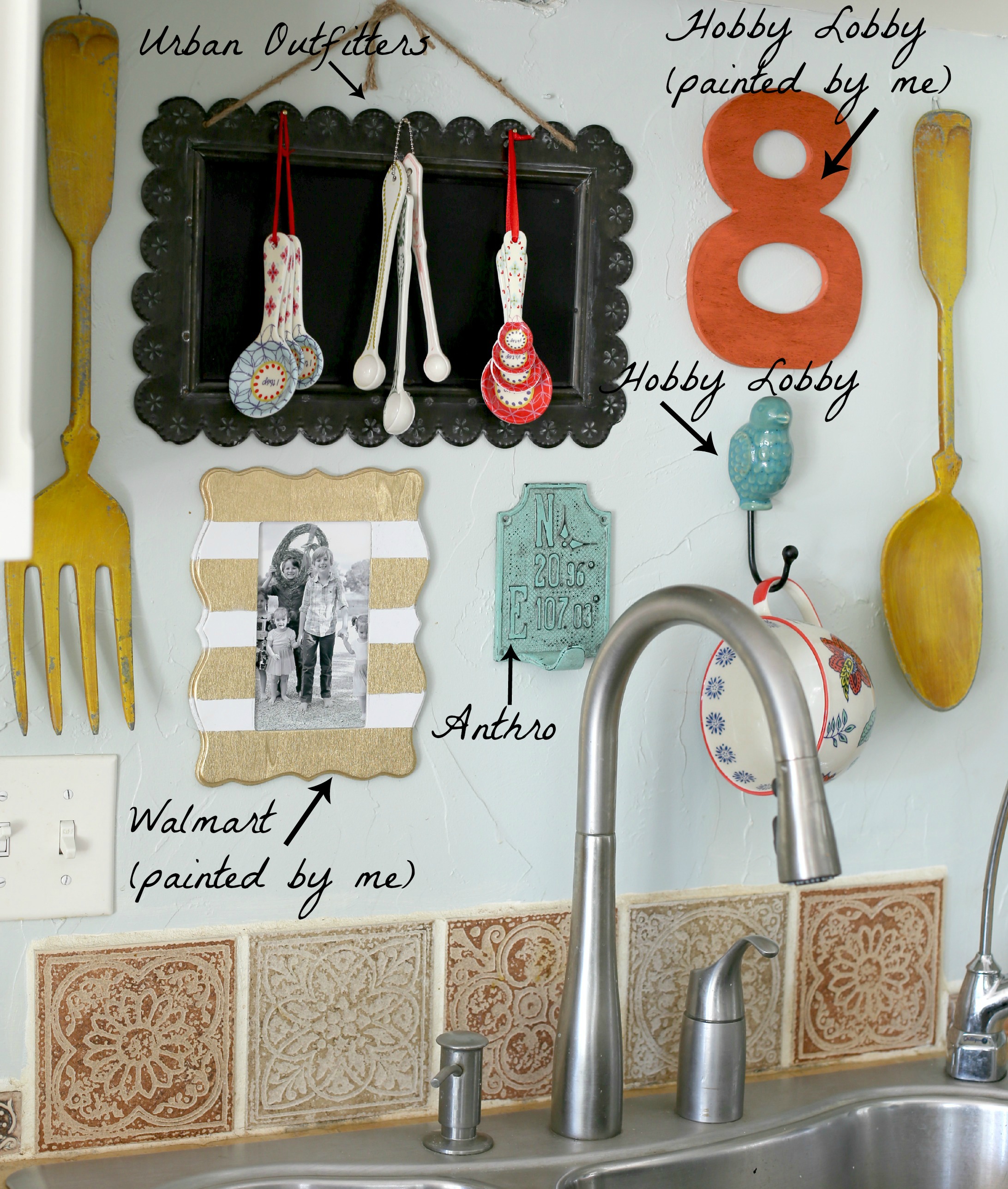 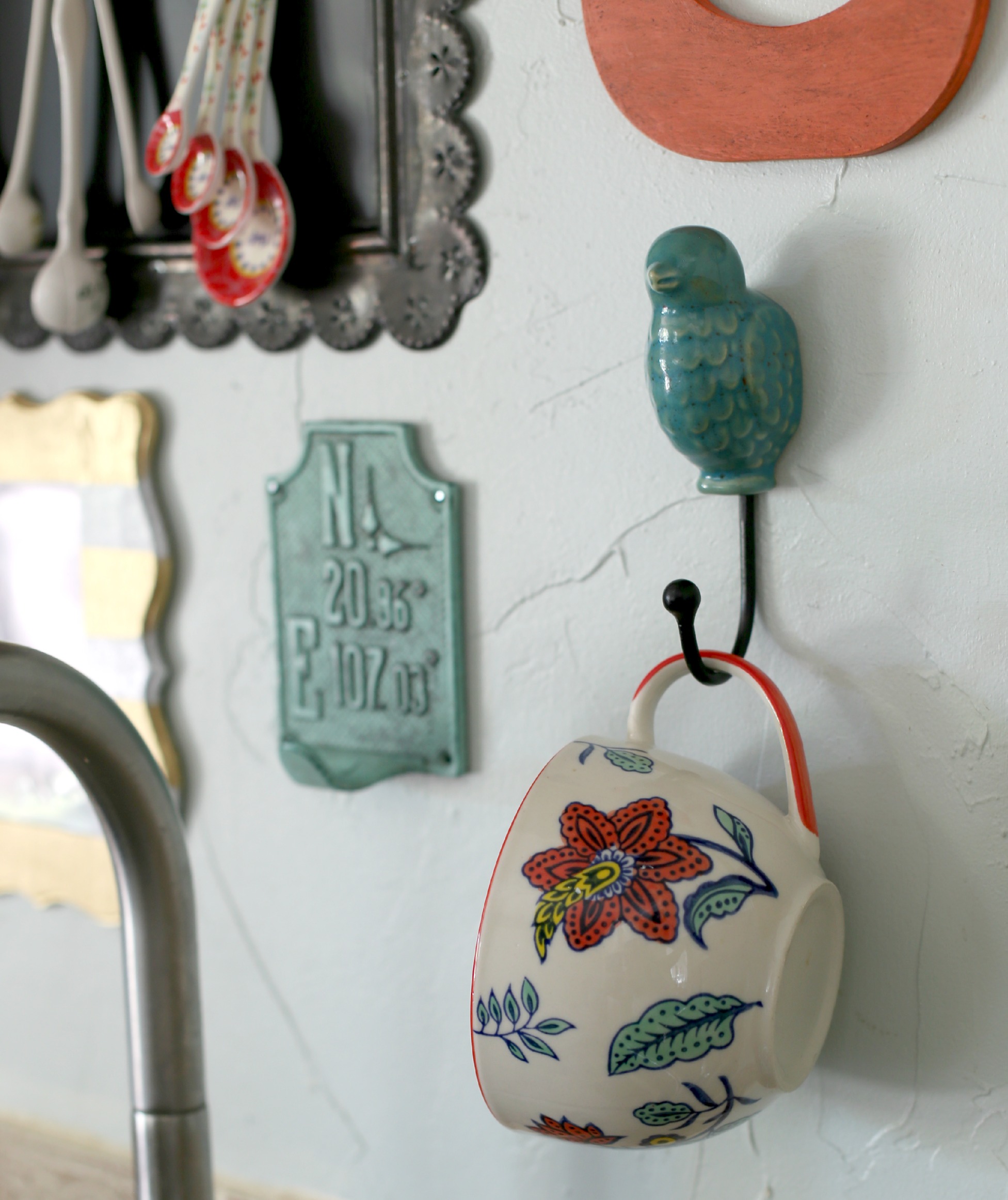 The bird hook + letter from Hobby Lobby, the scalloped chalkboard from Urban Outfitters (I got mine when it was on sale), and the frame from Walmart are all still available. The measuring spoons are from Michael’s (no longer available, although I think I spotted a set of them on Amazon a few weeks ago for waaaaaay more than I paid) and Anthro (not available online). 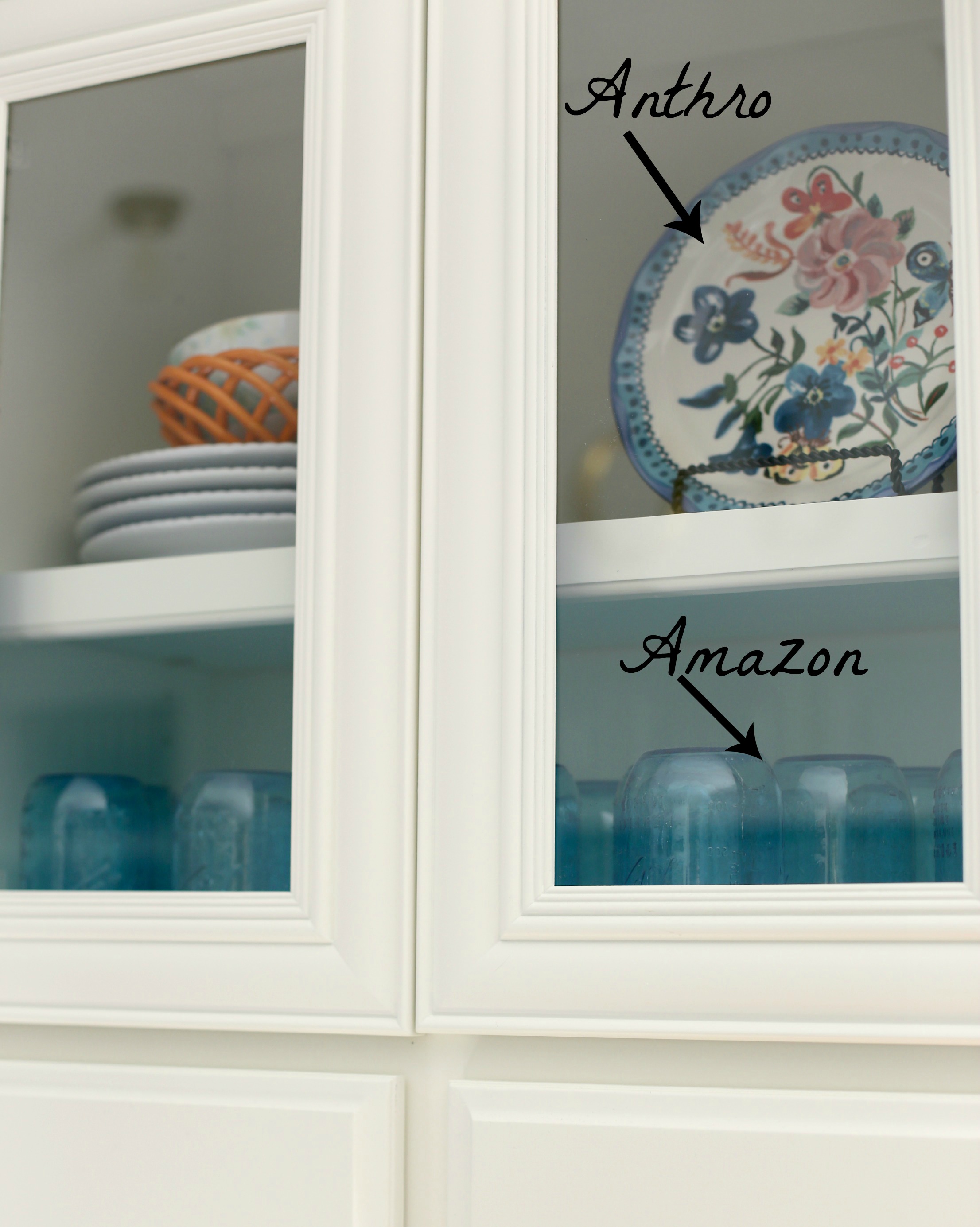 That Anthro plate is available from ebay if you want to spend a fortune (I think I paid $7, but people be scalping, y’all). And the mason jars are still available from Amazon. 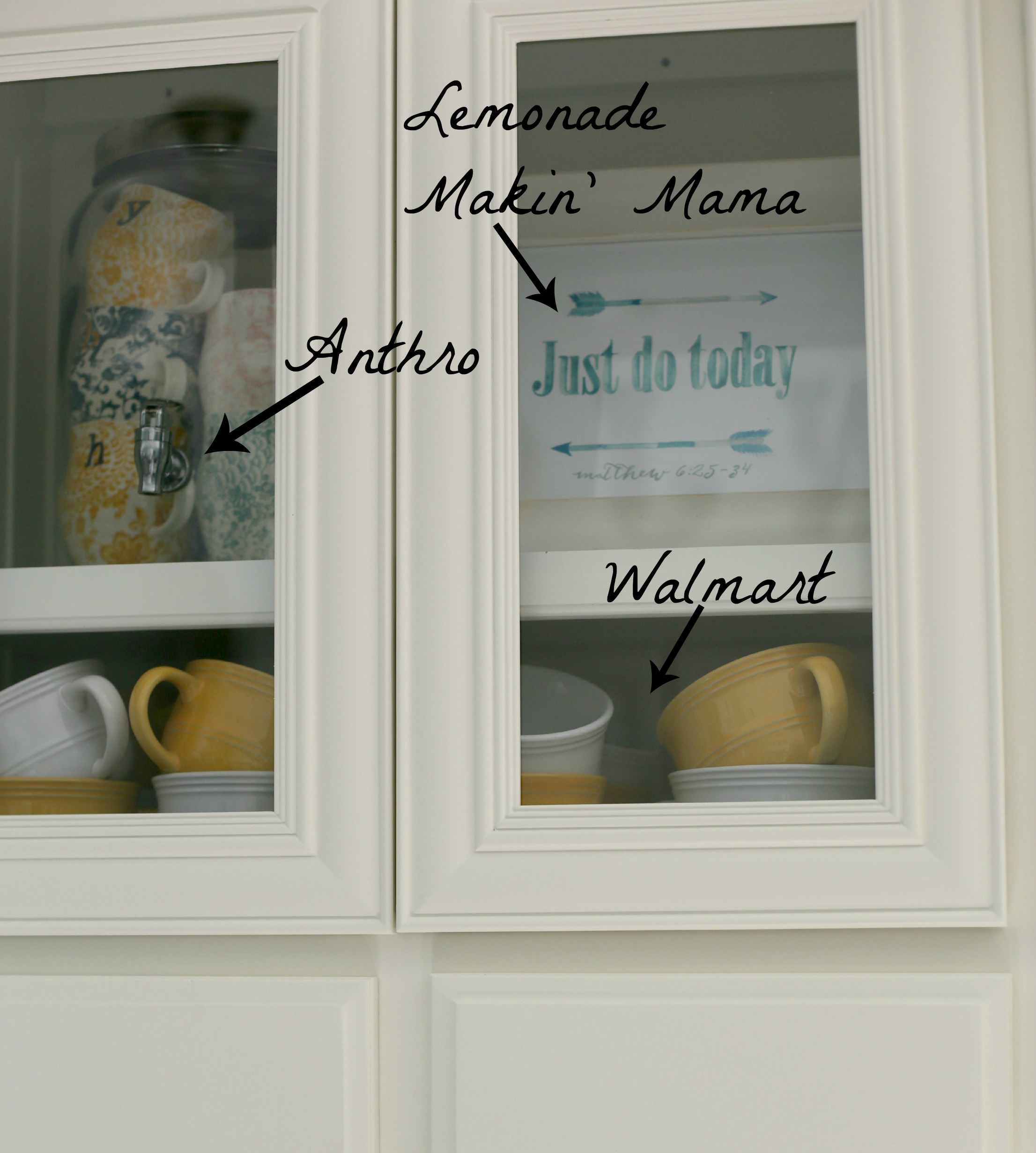 The Just Do Today print is available from Lemonade Makin’ Mama. I love mine! All of the initial mugs are from Anthro (mine were a Christmas gift and spell out my name), and the soup mugs may or may not still be available at Walmart (I bought mine back in the spring when we had our dinner party).

Aaaaaand…I think that about covers it. Obviously, I have a thing for deeply discounted Anthro knick-knacks, random Marshall’s/Ross purchases, and–above all–HOBBY LOBBY. If you don’t have an HL near you, I’m sorry. That place is pure magic, and they almost always have something I’m looking for for 50% off (which brings it down to either a good or reasonable price) or, if all else fails, I can use their omnipresent 40% off one full-priced item.

Did I miss something you were wondering about? Feel free to ask away!