There is a point that I reach in every pregnancy where getting dressed just sounds like a joke. A cruel, sadistic joke that had to have been invented by a man, who, by laws of nature, will never have to experience this particular level of extreme clothing aversion.

Of course, by “dressed,” I mean in anything other than items made from the stretchiest of materials. (Wandering around in the buff sounds even crueler–especially to those around me–than actually clothing myself).

And I am here to say, my friends, that I have reached that point. At 39 weeks and change, there are very few items in my closet with whom I am still on speaking terms. Last week alone, I had a girls’ night out and a date night with my husband–both of which are rare and cherished occurrences. And yet. They required semi-cute outfits that didn’t leave 3 1/2 inches of belly exposed. Ugh.

Now, in all likelihood, I’ve still got a ways to go (my babies tend to be fashionably late to the party), so the 6 items I have left in my closet that still look decent and cover the bump will be on constant repeat for the next ____________ (insert more days than I care to even consider).

So, what’s a very pregnant girl to do?

Why, browse for clothes for when she’s not pregnant anymore (which might be in 2015…yipes!), of course.

And where is said very pregnant girl to do such browsing?…since actually going to a store and trying on anything would be enough to send her on a crying jag of such epic proportions that it might take a very large Coke Icee and several Snickers bars to quell it? Oh, and especially since said pregnant girl doesn’t exactly want to drop a wad of cash on these after-baby clothes that may or may not fit for another 3 months (optimistically).

Have you heard of it?

It’s an online used clothing consignment site that lets you search by brand name, size, item type, color, and pretty much any other qualifier your heart could desire until you find just the right thing in just the right size.

The pictures they display are usually quite clear and detailed, they carry a huge variety of brands, and–maybe best of all in my mind–they give each article of clothing a “wear” rating and include a description of any possible flaws.

I was fairly unfamiliar with the site until a few weeks ago, when I did a FB poll, and several lovely peeps assured me of their good experiences with ThredUp and even clued me in to a 40% off an entire order coupon that I could use.

So! With my coupon code copied to my clipboard, I proceeded to spend a Friday evening snuggled next to my husband, watching a movie with one eye while browsing ThredUp for the best deals with my other (apparently, I have very talented, slightly schizo eyeballs; just don’t quiz me about the movie plot).

And you know what I discovered? Some really amazing deals. 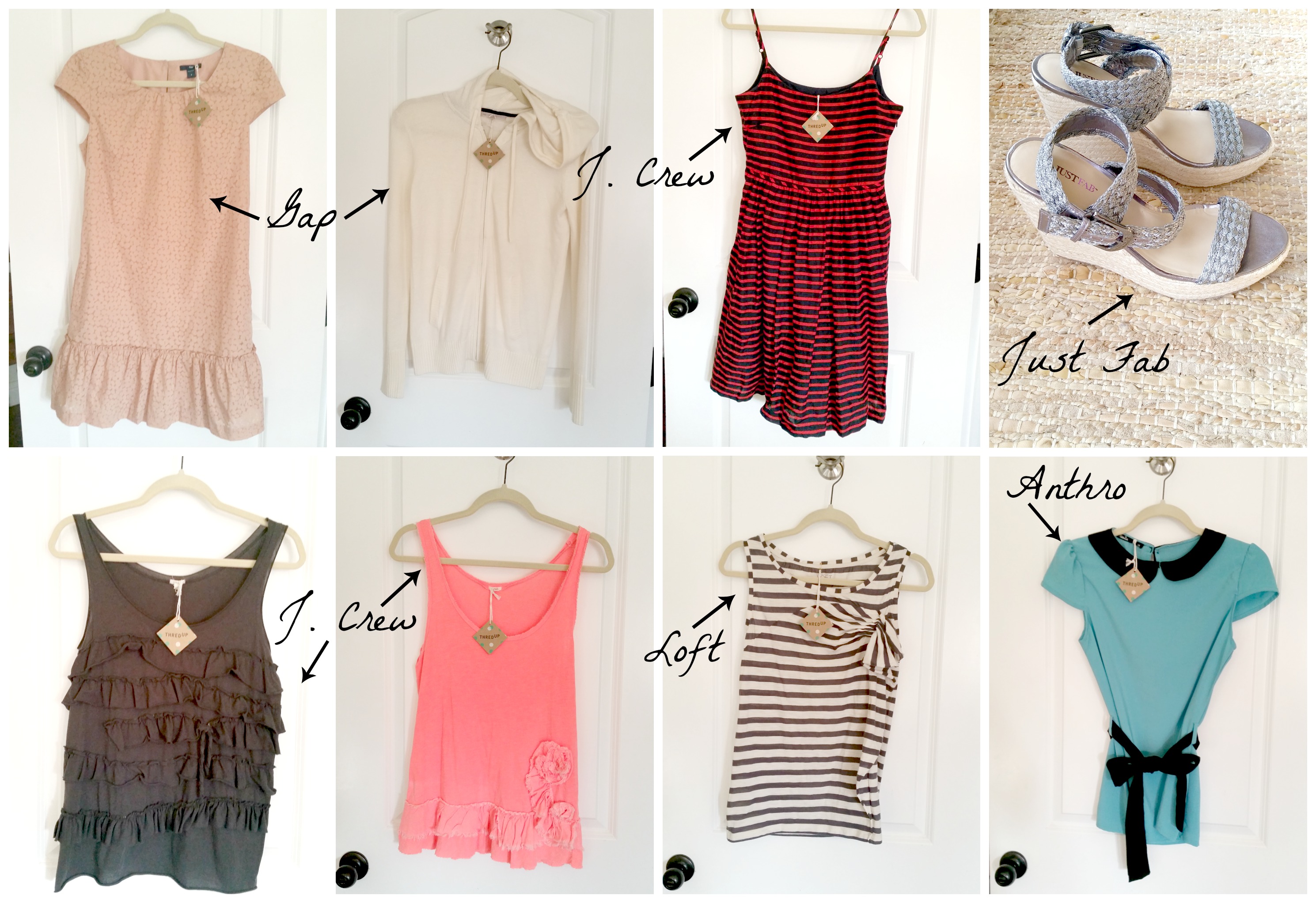 I was very picky with my selections–only choosing name brand items that were described as “like new” condition, with a starting price point of $12 or less (most way less)

And while, yes, it probably looks like I bought items for next spring (which, hey, may be the most realistic projection for when I can fit into them), the truth is that our Texas winters tend to be mild enough that I should be able to wear the shirts under layers like cardigans and the dresses with tights, boots, and jackets as soon as I’m able to squeeze into them.

To my delight, all of the items arrived in true “like new” condition (I’m pretty sure several of them, including the shoes, had never been worn) and were exactly as described/pictured on the site.

And now, because I’m sure you’re dying to know the total for my haul, I am happy to announce that I got 2 dresses, 4 tops, one pair of shoes, and one wool-blend zip-up hoodie (ah, how I love hoodies!) for…

And I never left my house. (#holla)

Shipping was free on orders over $50 (did I nail that or what?), and then there was the 40% off coupon, so I got about the best deal I possibly could have. But still. Mint condition, cute clothes, shipped to your door for only a little more than Goodwill prices?

And before you think that I have signed up to be a spokesperson for ThredUp (although, apparently, I should, huh?) this post is simply a public service announcement to all of you fellow thrifties who love a good deal as much as I do.

In case you can’t already tell, I’m a fan.

So, spill: have any of you ever tried ThredUp? Were you as impressed as I was? I was genuinely happy with everything from the packaging (which was cute and thorough) to the clothing quality and accuracy.

Did this post give you a hankering to try it for yourself? If so, shoot me your email address at blogabbie{at}gmail{dot}com or just leave it in the comments, and I’ll send you a friend share code that gives you an automatic $10 credit if you’re a first-time customer. In full disclosure, it also gives me $10 for sharing, but, while it probably seems like this was the ulterior motive of this post, the truth is that I was just so excited to share about my score that wrote the entire post, hit publish, and THEN went to the site and realized that I could use the friend-share code with as many people as I wanted (I had previously thought it was a one time thing). So…NO PRESSURE at all, but if you’re interested in giving it a go…we both win! 😉

0 thoughts on “I’m having an affair with ThredUp.com (Shhhhh…don’t tell Goodwill)”