I never wanted a Christmas baby. Mostly because I love birthdays and celebrating them, and I didn’t love the concept of one of my children’s birthdays being swallowed whole every year by the hustle and manic rush of our country’s most cherished, most overblown holiday.

And yet, here I find myself, 40 weeks pregnant, not-so-patiently awaiting the arrival of a baby boy, not unlike a certain Jewish girl 2,000 years ago. (Although, yes I realize that Jesus wasn’t actually born in December).

I’ve never given Mary too much thought. I mean, after all, she was just the vessel. Just the container for the miracle that was God incarnate. Nothing special, really.

The thing is, it’s easy to dismiss Mary as ordinary until you read the Magnificat. I mean, historians estimate that Mary was somewhere between thirteen and fifteen-years-old when she received the news of her impending pregnancy.

If an angel of the Lord had appeared to my 14-year-old self and proclaimed that I would be supernaturally impregnated with the Savior of the world, I’m pretty sure my reaction would have been as follows:

2) wake up, remember what the angel said, and burst into tears

3) curl up in the fetal position and suck my thumb

And yet, Mary, a simple, uneducated teenager had this to say (among other things):

“My soul magnifies the Lord, and my spirit rejoices in God my Savior, for He has looked on the humble estate of his servant…he who is mighty has done great things for me, and holy is his name.”

Not only is her eloquence surprising but her poise is just astounding.

Was she scared? I have no doubt. Worried? Um, yes. Aware of the repercussions of a virgin pregnancy that no one would believe? I’m sure.

And yet, she chose to praise.

Which is very different from the response I had yesterday as I was lettering the words, “A thrill of hope, the weary world rejoices,” on a piece of burlap with a black Sharpie, feeling all of the weariness and none of the rejoicing. 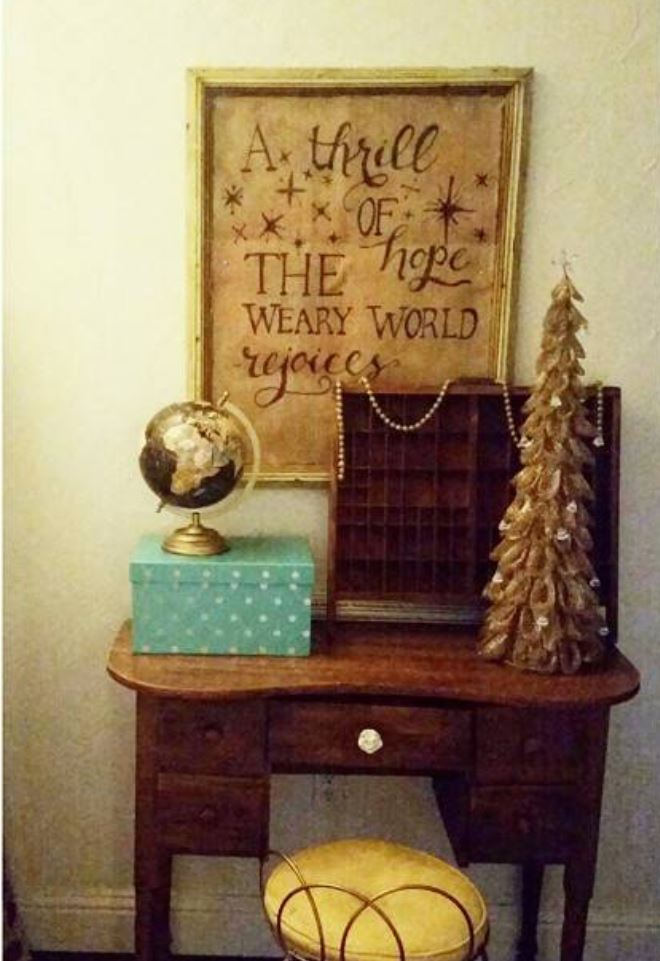 My body has been trying to go into labor for over a week now. At first, I was cautiously hopeful. After 5 babies, I am on a little too friendly of terms with my old friend, the Braxton Hicks contraction. But these were different. And if they could just establish a pattern and kick in, darn it, we could get this baby out.

But as I was having yet another hormonal episode (right in the middle of touching up the word, “rejoice,” ironically enough), I thought about Mary.

Mary, who was forced to ride aback a bony donkey for days, hugely pregnant, with no hope of a bath or anything resembling a decent bed.

Mary, who, even when she did finally arrive at the closest thing to the prospect of a bath and a decent bed, was rejected out of hand with the terse declaration of, “No room.”

Mary, who suffered through contraction after contraction, crouched in the filthy hay, surrounded by lowing, braying, baaing creatures. No midwife. No dresser full of tiny, clean little clothes she didn’t have to sew herself. No freezer full of meals just waiting to be thawed in a magical contraption called a microwave.

My tailbone is getting sore just sitting here on my comfortable couch as I type this. If you asked me to get on a donkey, much less ride him for longer than 2 minutes, I might drop-kick you across the room.

Can you imagine her discomfort, her uncertainty, her worry that she might somehow manage to completely bungle this whole being-the-mother-of-God assignment? I can’t, and I’m feeling considerably more empathetic with her than I ever have before.

You know that song, Mary Did You Know? It posits all kinds of questions about whether Mary fully understood the impact that the tiny baby in her womb would have on the world. For eternity. I have to think that she didn’t. Couldn’t.

And yet, Mary did understand this: God is God. Period. And not only that. But he is Good. And that was enough for her.

May it also be enough for me (and you) this Christmas season.

Today, I am asking the Savior of the world to remind me, in “my humble estate,” to “magnify the Lord.”

Merry Christmas, friends. May a joy that has nothing to do with your circumstances and a peace that passes all understanding fill your hearts and minds this blessed season.