Pretty much every time we’ve gotten back from a trip in the last two years, Shaun and I have looked at each other and said, “Welp. That was fun. But it’s never happening again. At least not until we’re old, and the kids are grown. I mean. How could it? We have ___________ of the little critters, for crying out loud.” (Funny how that number’s not getting any smaller).

And then, a year or so goes by, and we get the itch to get a few days to ourselves, and we start thinking, maaaaayyybe we can talk those nice parents of ours into keeping our kids yet again.

Oh-so-graciously, we both have super-obliging parents who not only love their grandchildren but are sweet enough to watch them for days at a time so we can get away. (I suppose it doesn’t hurt that both sets live 30 minutes to an hour-ish away).

We usually do a split deal, since the twins–at not-quite-3–are what might be generously termed a “handful” (assuming you have God-sized hands) on their own.

So, with the older 3 off at my mom’s house, and the twins at his, we winged our way to California for a 5-day road trip down the Pacific Coast Highway. 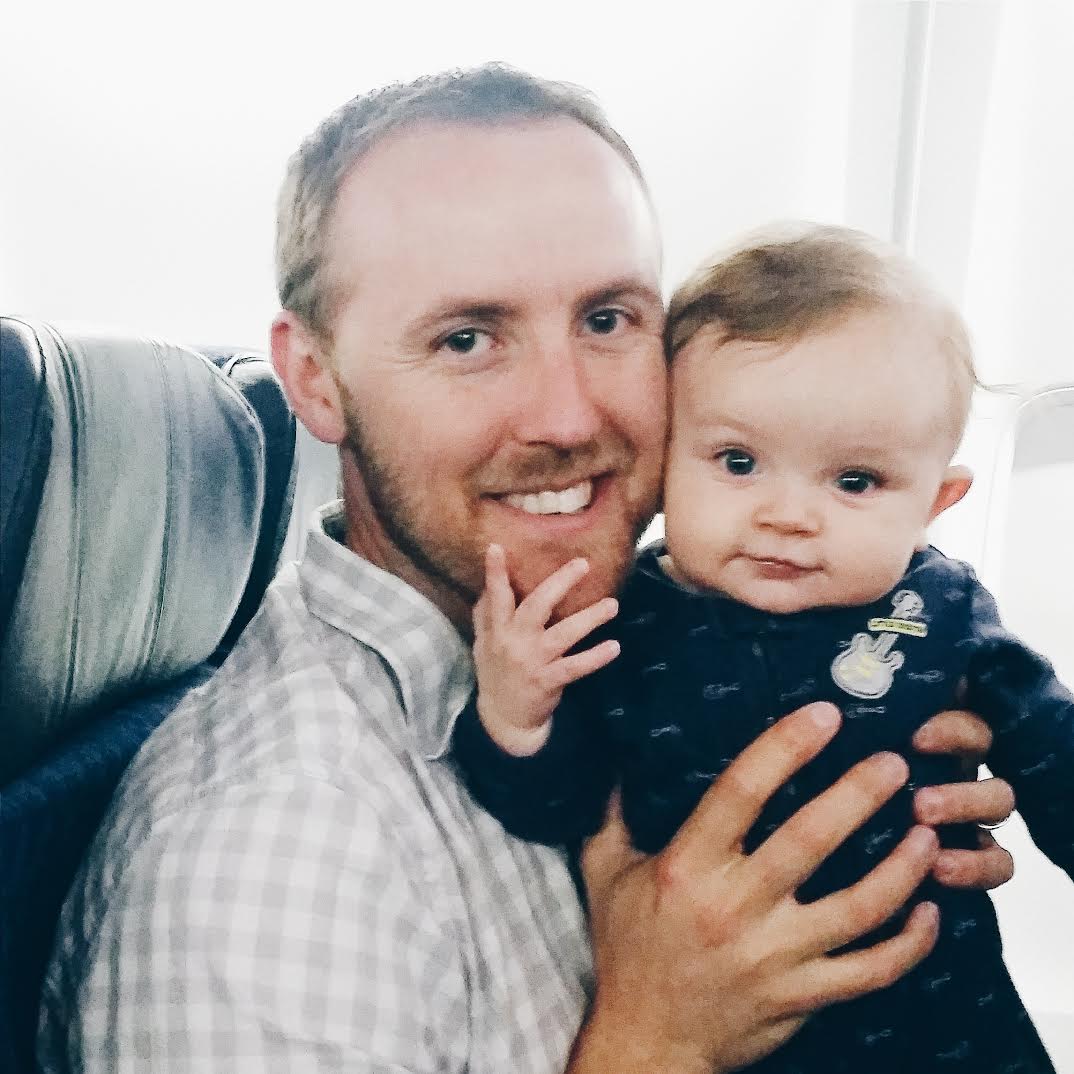 Here is #Theodorbs himself, ready to charm an entire airplane. But for reals. He did great and spent pretty much the entire flight climbing between Shaun’s and my laps, alternating between nursing, napping, and grinning his sweet-cheeked little face off. 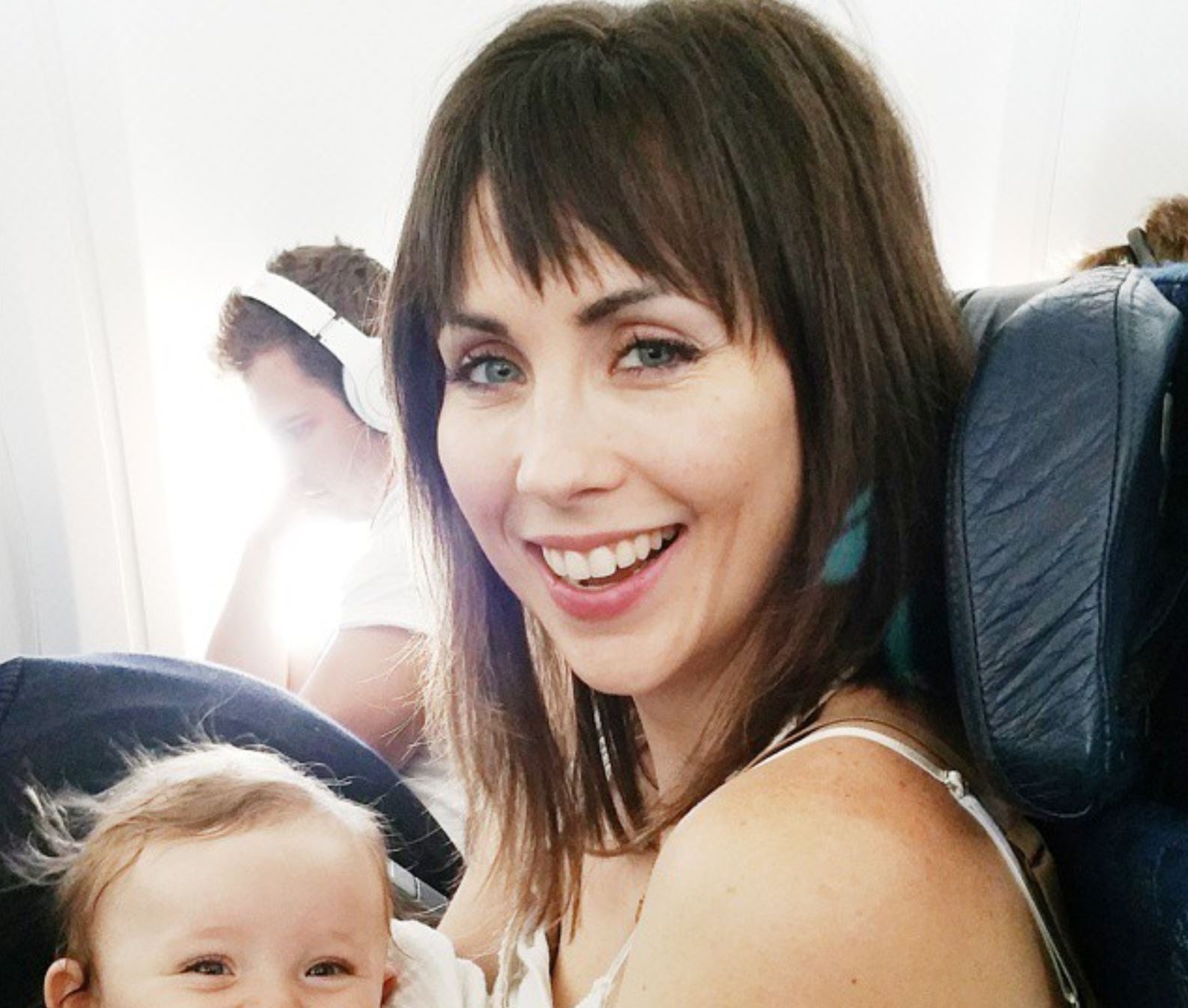 {Dude in the background clearly had no clue how lucky he was to have a crinkly-eyed, smiley baby next to him, and his wife–AKA, the black lump you see behind Theo’s head, slumped forward with her face resting on the tray table–slept through every effort at cuteness that he attempted. And that was just fine by me}

We began our journey here: 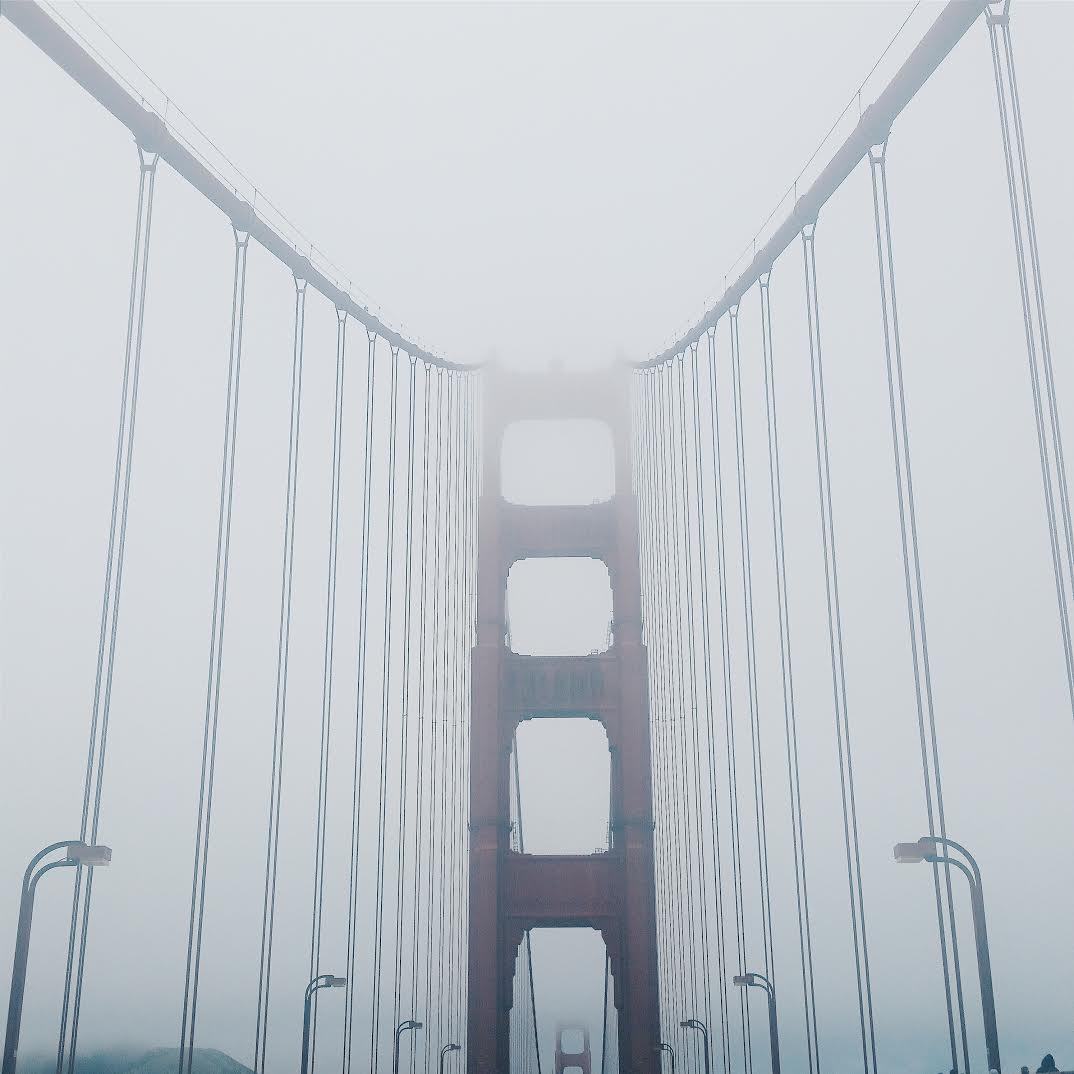 From San Francisco, we made our way down the 1 to Santa Rosa, where we had booked a VRBO rental room at a cute little mini-farm, complete with ducks, dogs, cats, chickens, a peacock, and a donkey. 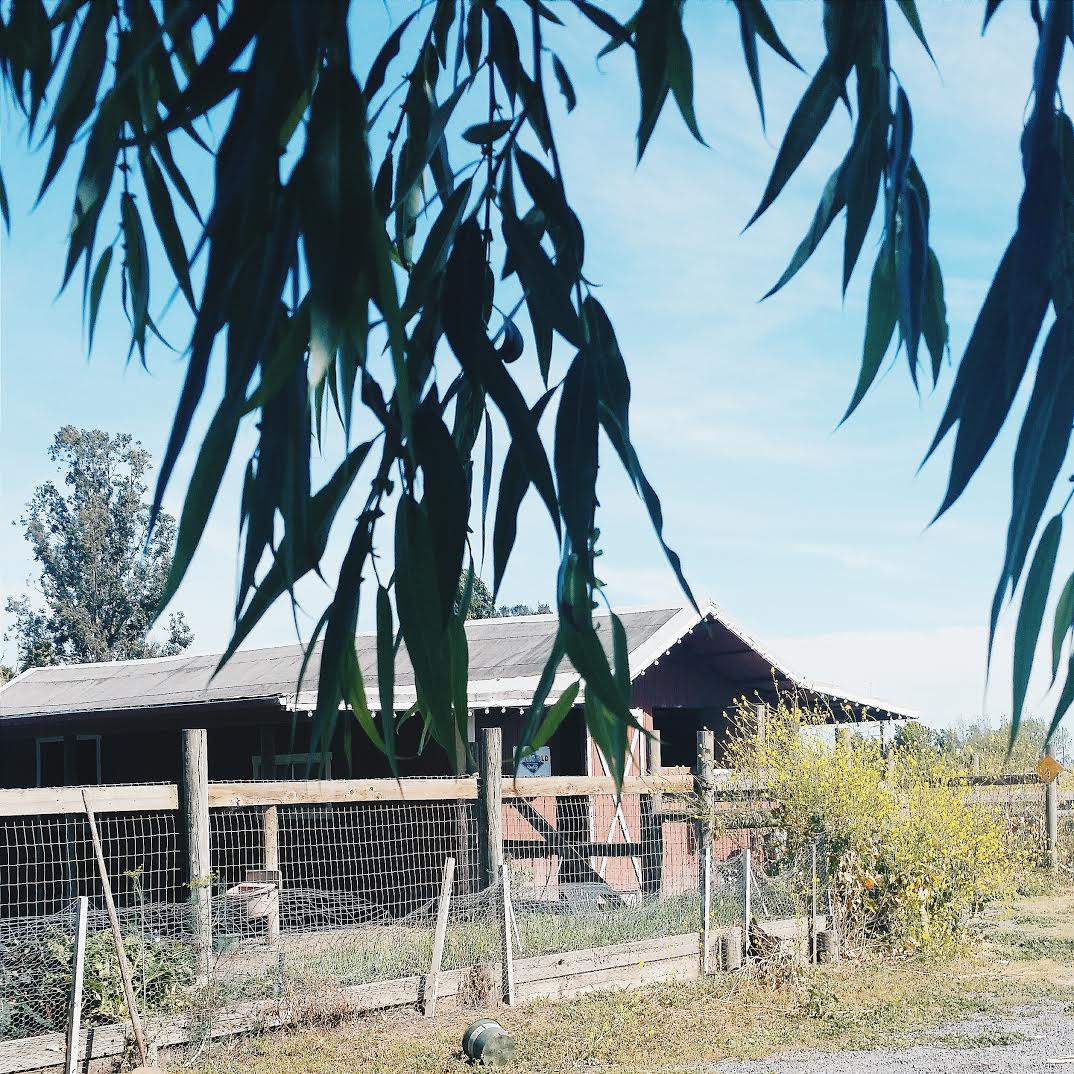 The weather, after weeks upon weeks of rain and mugginess in East Texas, was glorious. Crisp and cool and sunny. Neither Shaun nor I got more than an hour 1/2 of sleep the night before our flight due to various factors including the fact that our hop-over flight to Dallas got canceled (at midnight!) due to weather, and we ended up having to leave at 3:30 in the morning to make it on time for our flight. Shaun did all the driving, and I got to sleep in the car on the drive down from San Fran, so while he caught a quick Z or two in our room, I plugged my earphones in with an Audible book (The Kitchen House…it was pretty good, especially since the readers were excellent. I don’t think I would have liked it as much as a traditional read), and Theo and I roamed the farm property, checking out the critters and taking sun flare selfies. 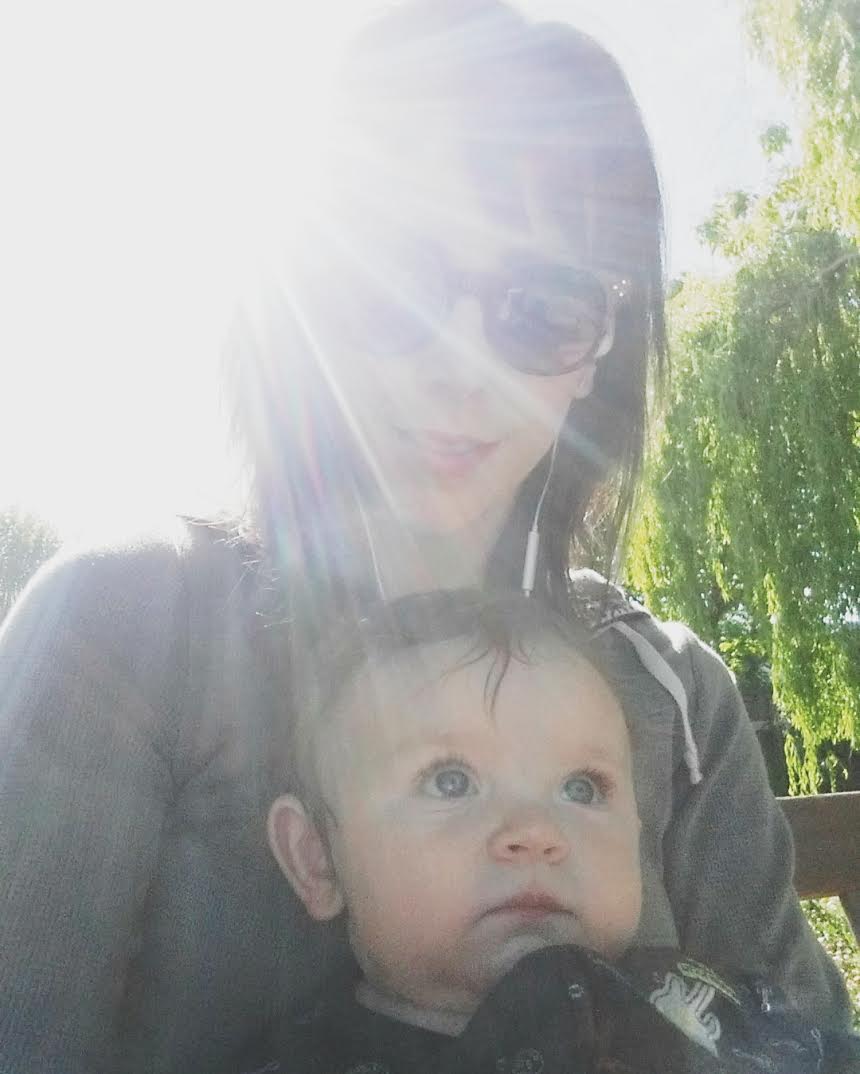 {I really should stop starving this child; his double-chin is clearly suffering}

After a fun (chilly) wander to the cute little downtown square that evening + a tasty dinner, we spent the next morning eating even more good food (don’t worry; I plan to treat you with a post all about our eats very soon) and stumbling upon a happy discovery. 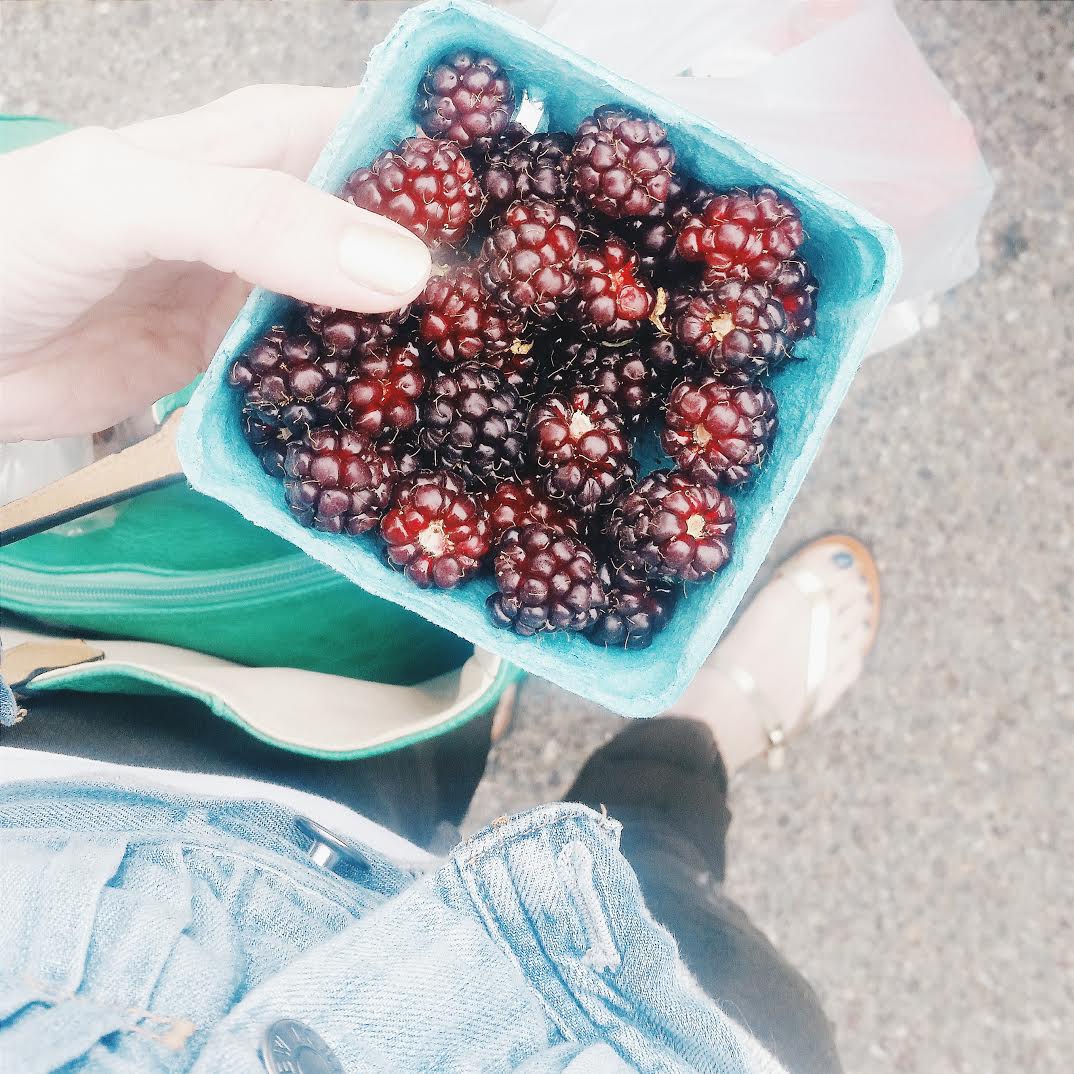 That would be the Santa Rosa Farmer’s Market. Very few things make our skirts fly up more than scoping out local vendors/shops/markets, etc. In fact, if those boysenberries (their flavor is part raspberry, part blackberry, and ALL yummy) don’t prove our willingness to buy local, then take a gander at my handmade leather sandals from Greece that I’m still wearing (and loving) a year later.

From Santa Rosa, we began our many hour meander down the coast, taking our time and catching our breath at views like this one: 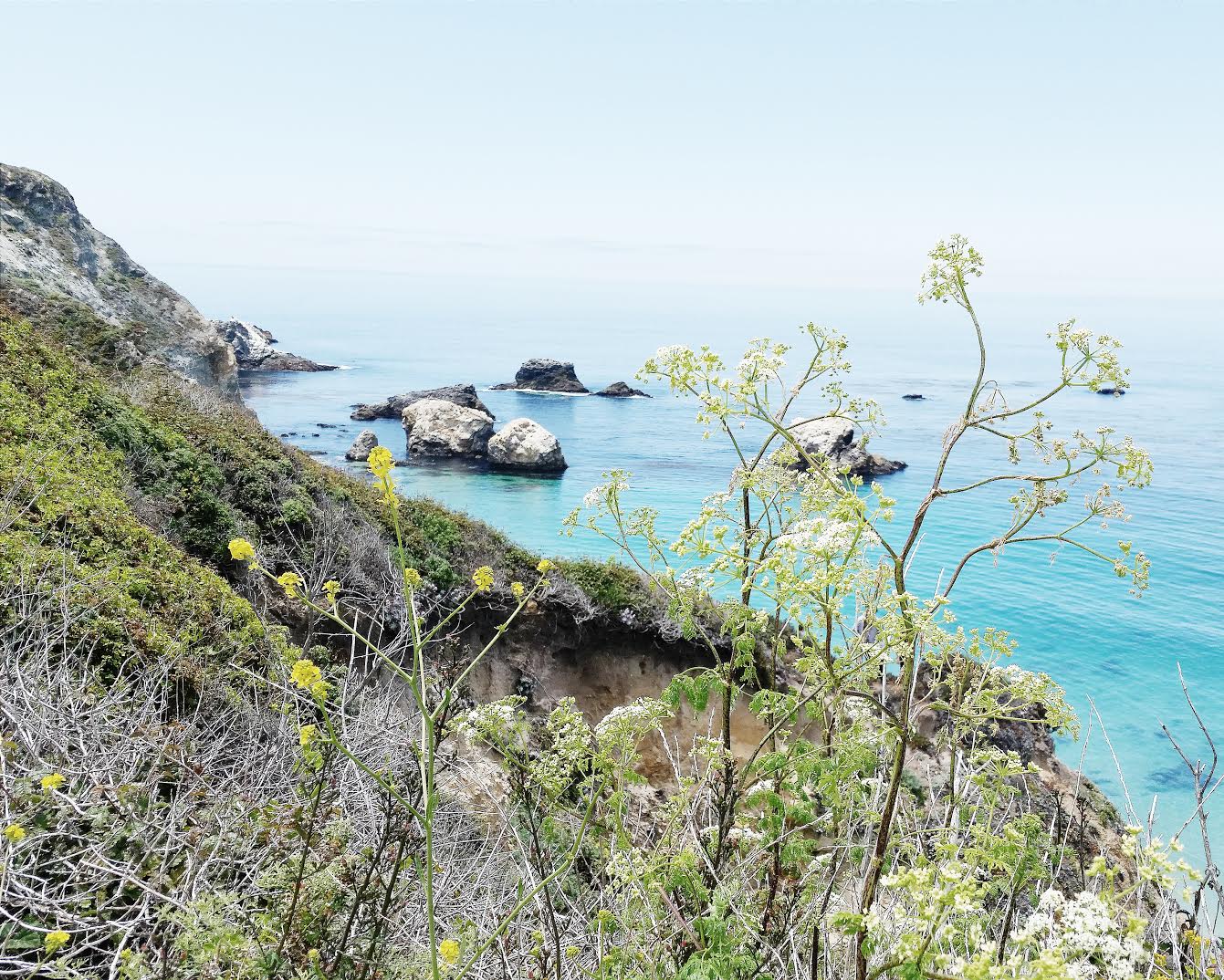 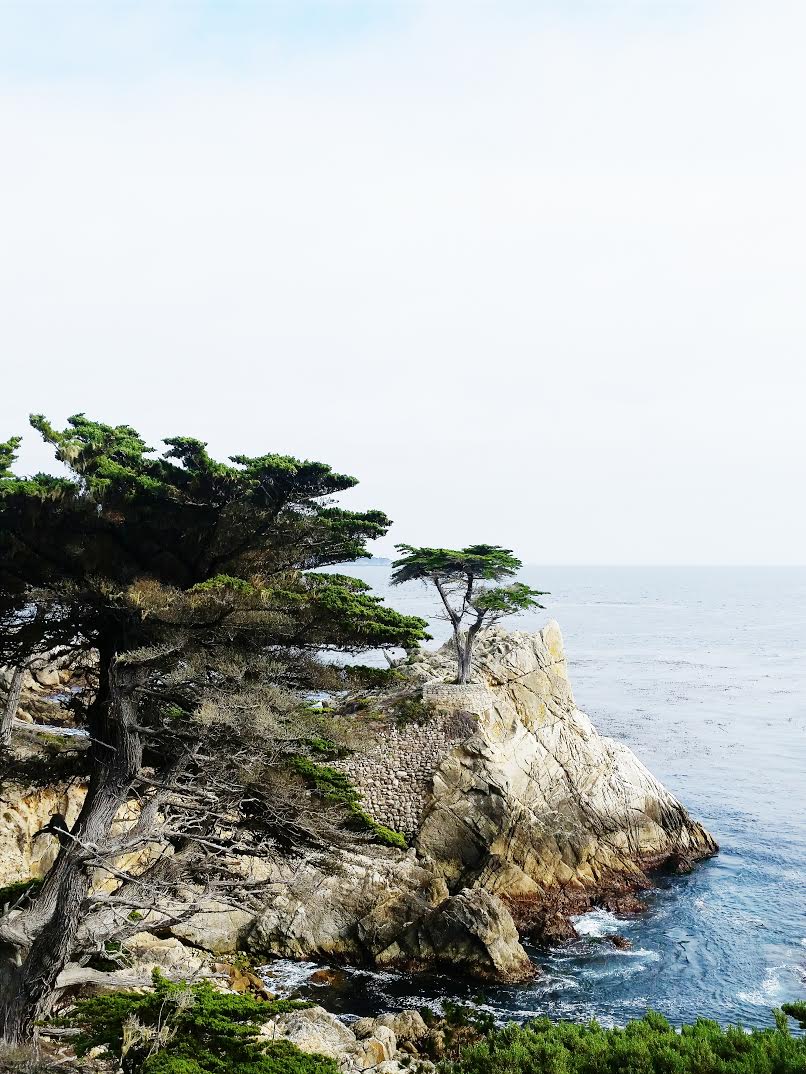 I know. Our lives are rough.

But before you hate us too much, I will report that Theo ended up with a (relatively mild) case of Hand, Foot, and Mouth Disease, which meant that I ended up sleeping through a fair bit of the views after spending my nights up with him doing my level best to get him to nurse and sleep for fitful spurts at a time. Shaun was a champ, driving the entire time, even though he wasn’t exactly getting tons of sleep himself.

Happily, Theo’s worst nights happened in Santa Barbara, where we stayed at another rental (Airbnb this time), which happened to be inside a lady’s home. At first, I was stressed about bothering her with all of our late night walking sessions and fussing, but it turned out that Gayla (our host) was one of the nicest human beings I have ever met. She was completely understanding about Theo’s sad state (she was a retired nurse) and went out of her way to do anything she could to make our stay more pleasant. She was such a lively, fun personality too, that whenever we were home at the same time and she tried to sneak off so that she “wouldn’t be in our way,” we did our best to convince her to stay so we could chat.

The rest of the time, we spent at the Monterey Aquarium (which was, quite possibly, the best I’ve ever been to, and I’ve seen some of the best in the world. I’m looking at you, Sydney), doing the 17 mile drive, and hanging out in the picturesque town of Carmel-By-The-Sea, where everything (including the Shell gas station) looks like it’s straight off the pages of a storybook. 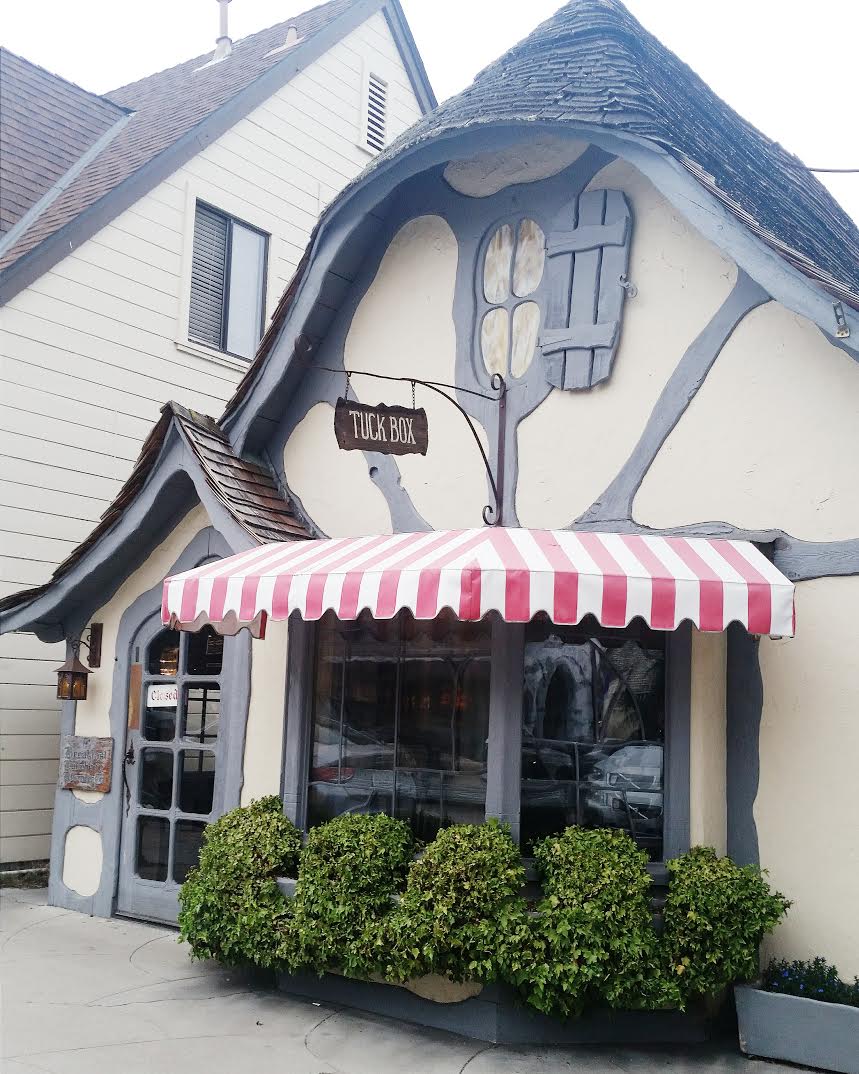 Our last night in Santa Barbara, we snuggled up to the fire on Gayla’s gorgeous back patio and made s’mores (with fixings that she provided…seriously, she was THEE best). 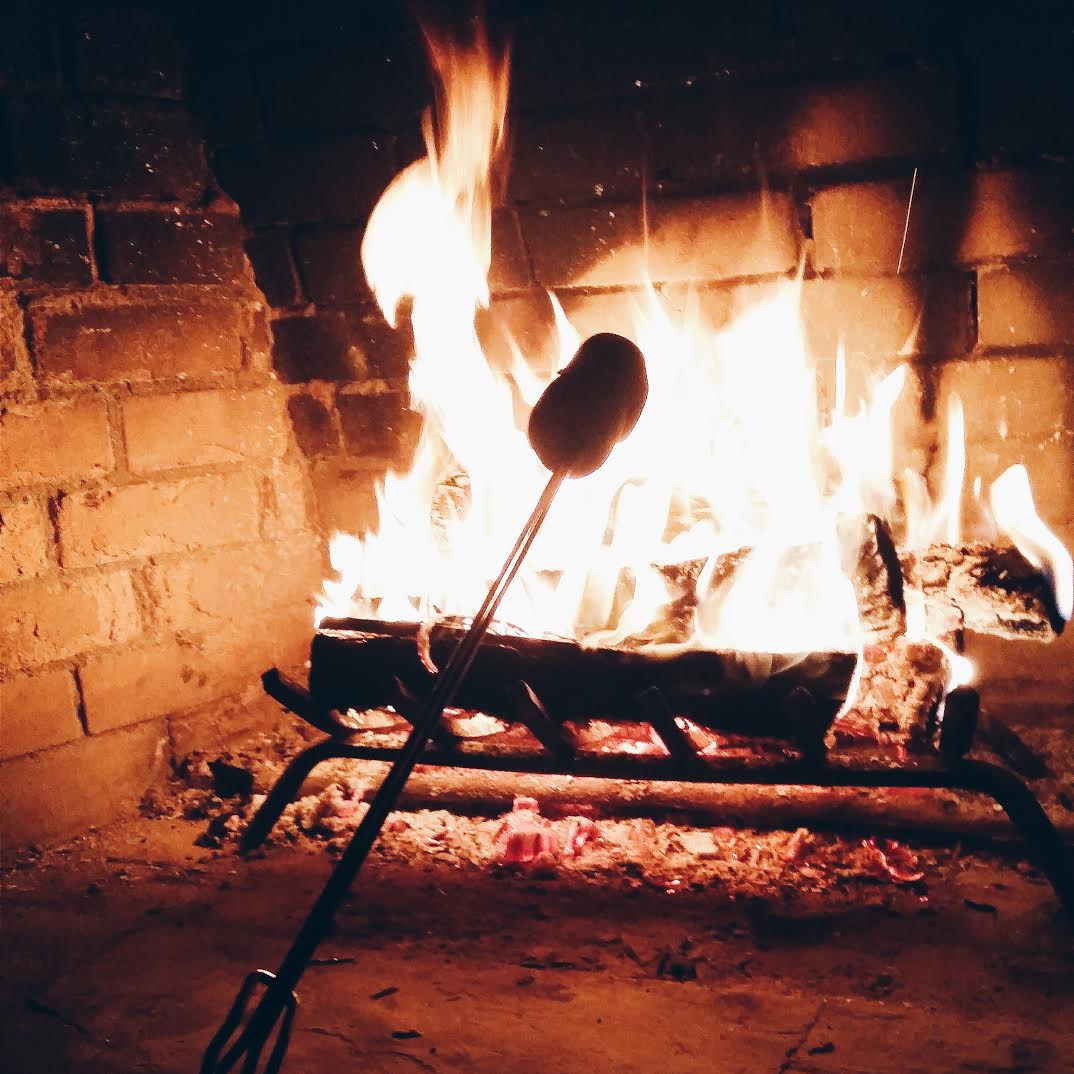 And then, just like that, it was our last day, and we found ourselves here… 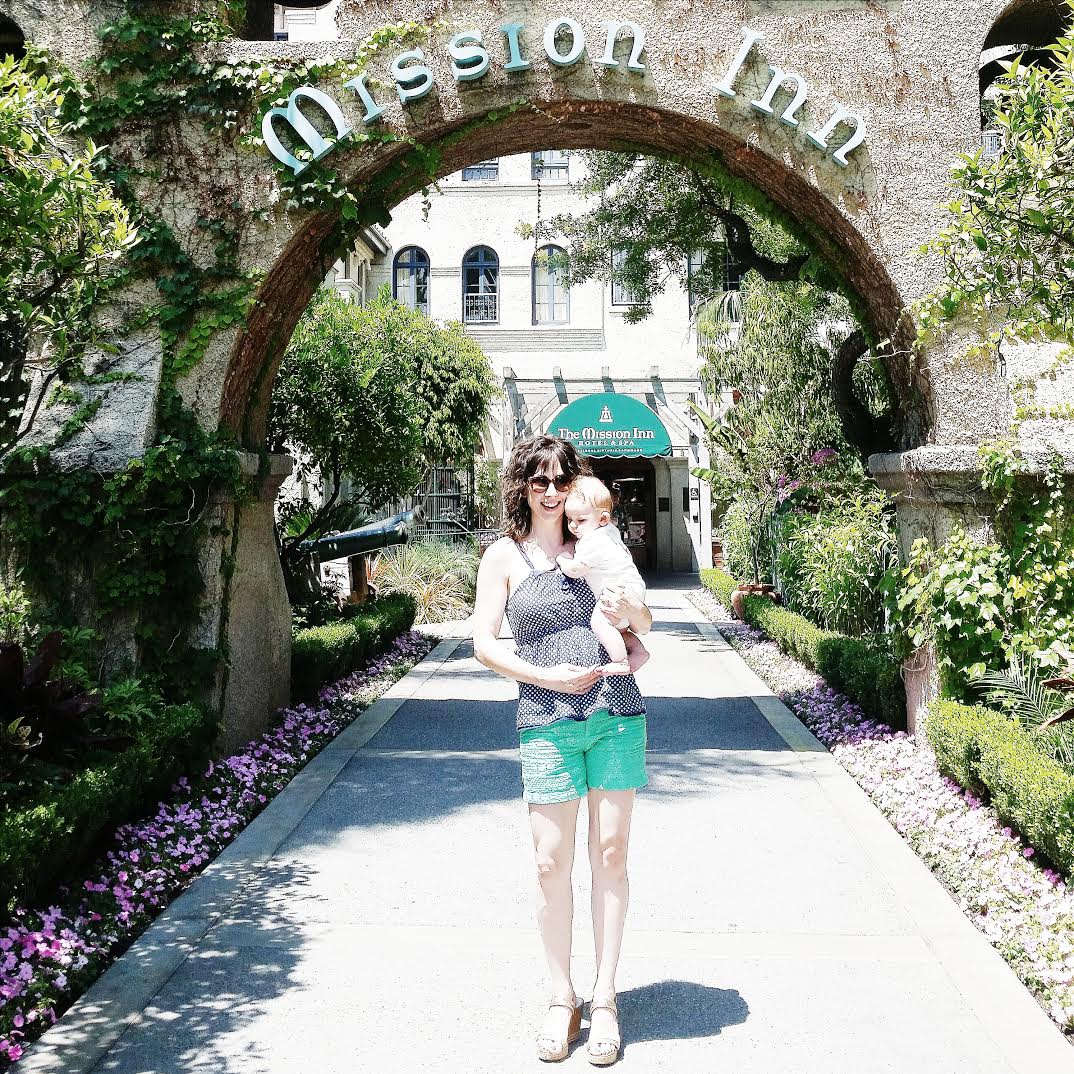 …and not even a little bit sad about it.

Really, the best word I can use to describe The Mission Inn is: Magic. 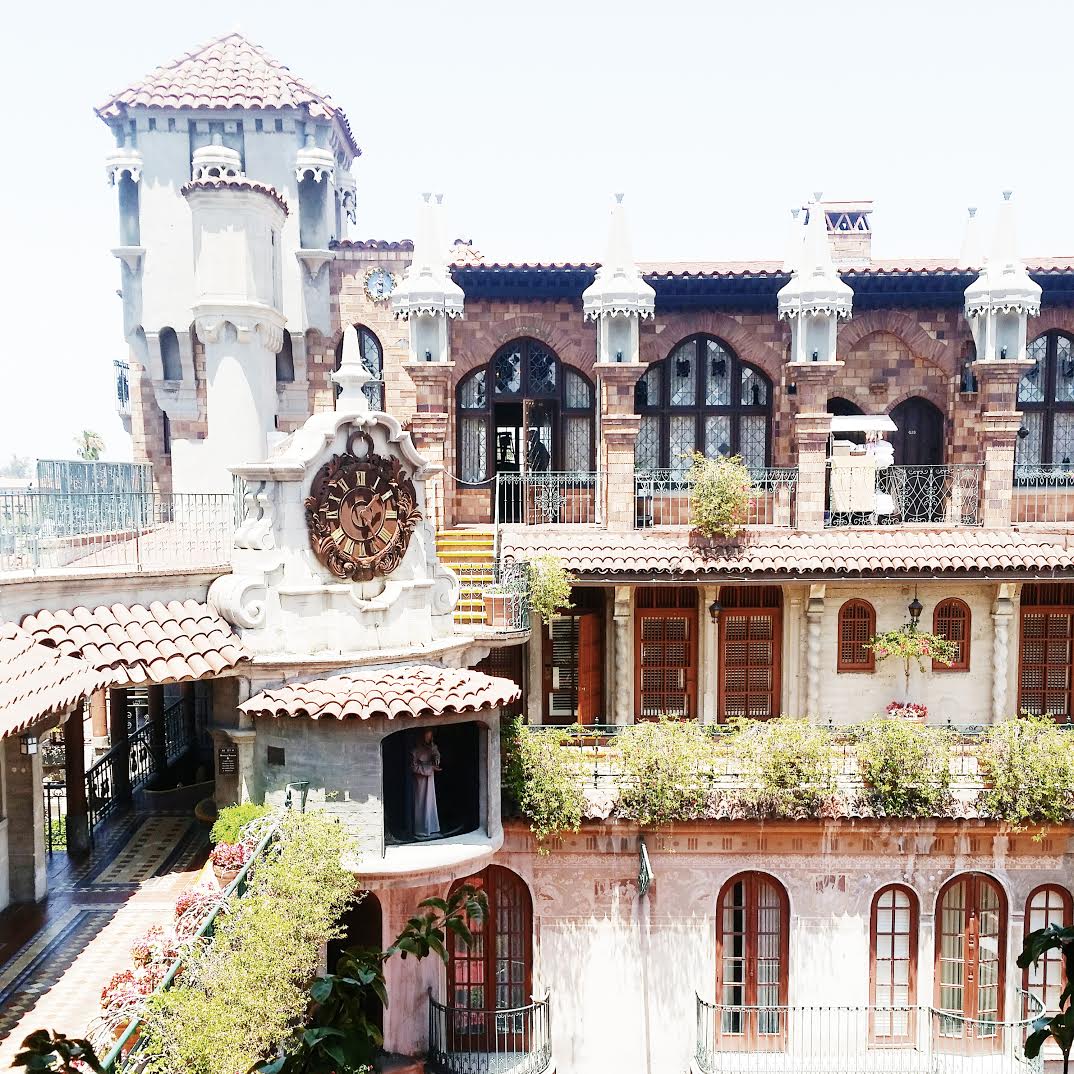 It’s the 3rd time we’ve gotten to stay here (including our babymoon when I was pregnant with the twins and our trip at Christmastime), and I’m starting to feel like this is “our place”–the one we’ll always come back to every chance we get. I don’t ever just love it that Shaun travels, but I can’t complain too much when his work keeps bringing him back to Riverside, California. (Even if it means that he was gone 20 out of 33 days from May 5-June 6–gulp!).

We even got the room that we stayed in on our original visit–the one with the high, high ceilings and the four-poster bed. 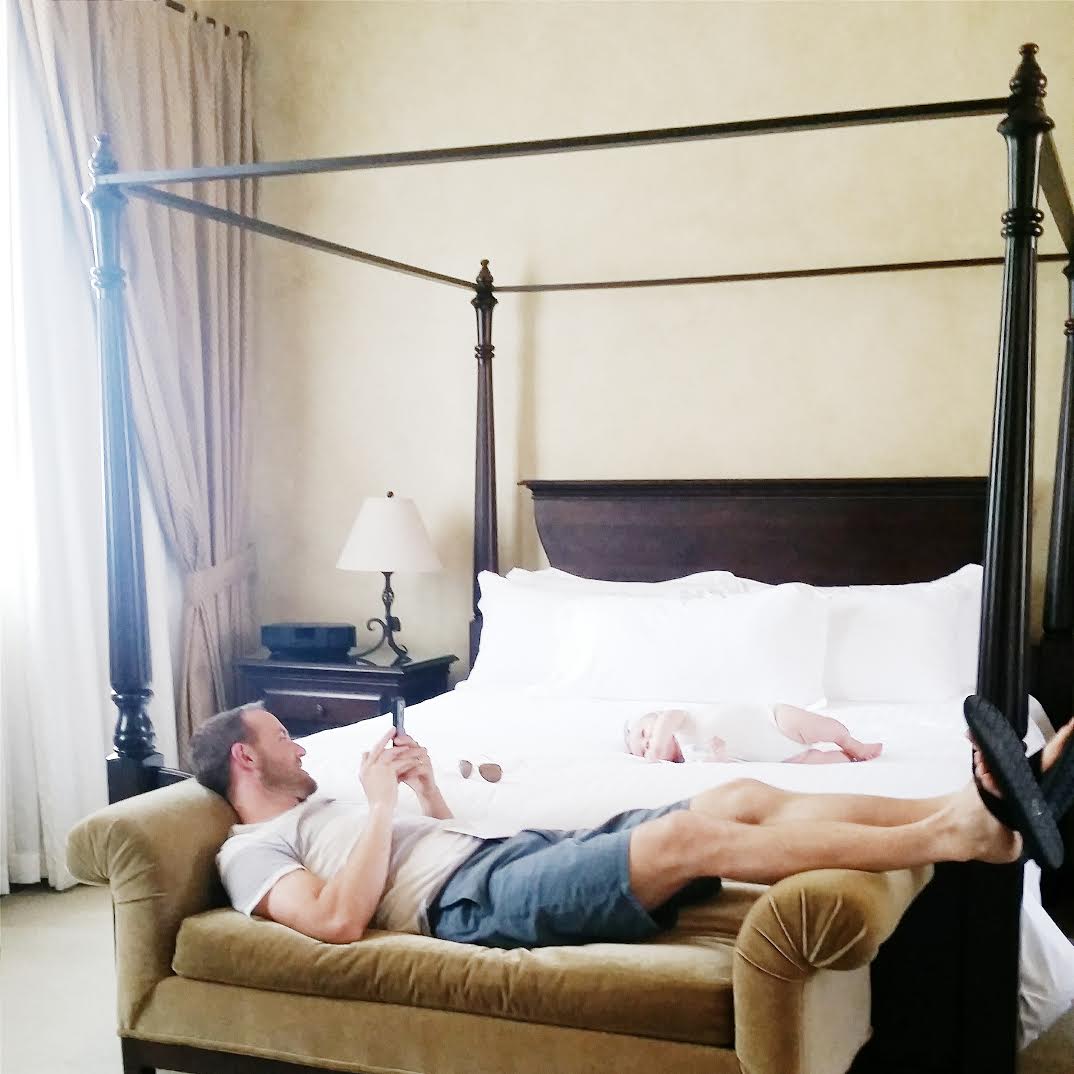 {Theo tried to convince me to let him sleep all sprawled out on the pristine white sheets while I took the hotel crib, but I didn’t bite} 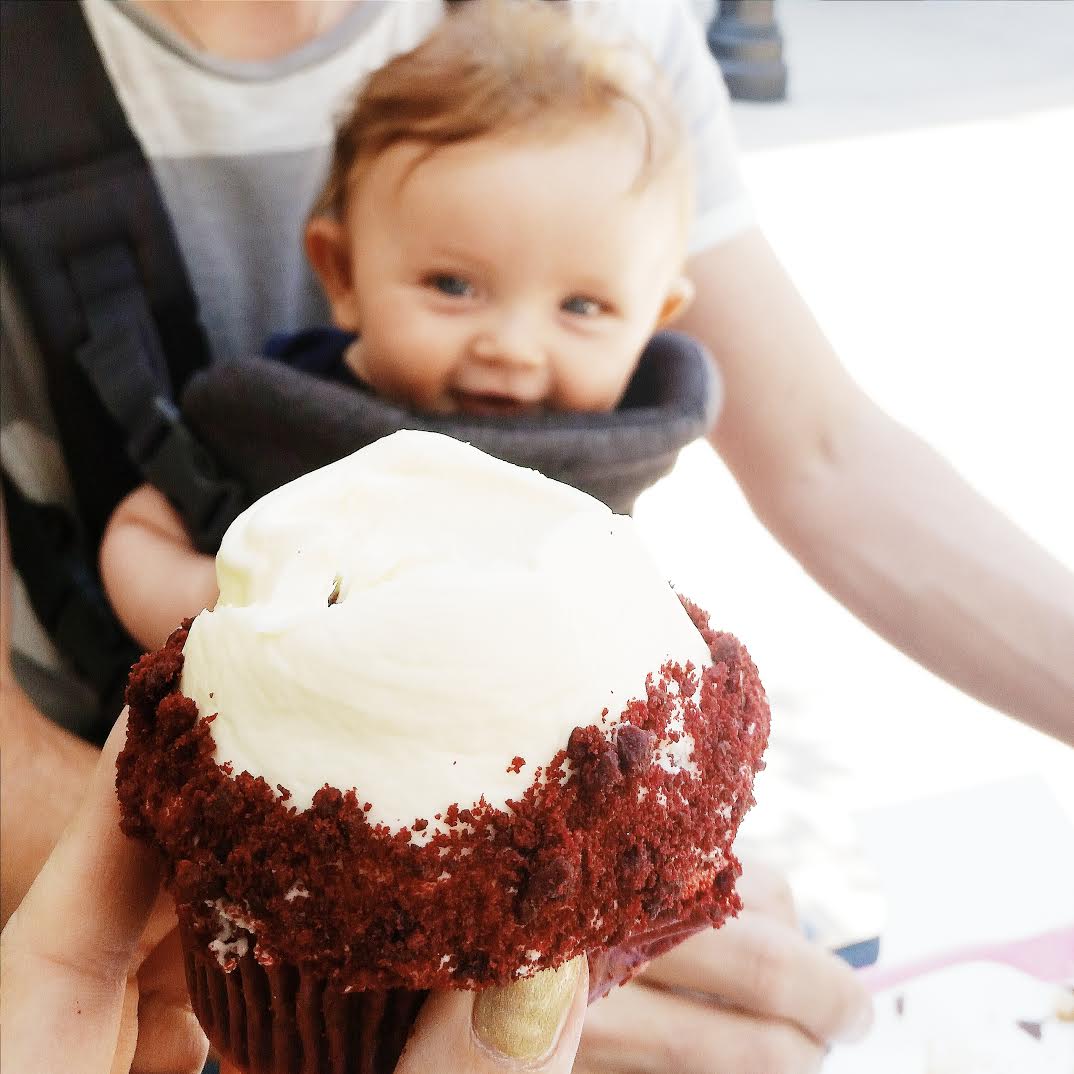 Speaking of bites, Theo also did his best to charm me into giving him a taste of my Casey’s Cupcakes red velvet masterpiece. (Nice try, cuteness, but your Mama’s got a hard, hard heart).

The Mission Inn is such a decadent experience already that Shaun and I couldn’t help but just laugh when they sent up a bottle of chilled sparkling wine after they found out it was our anniversary. 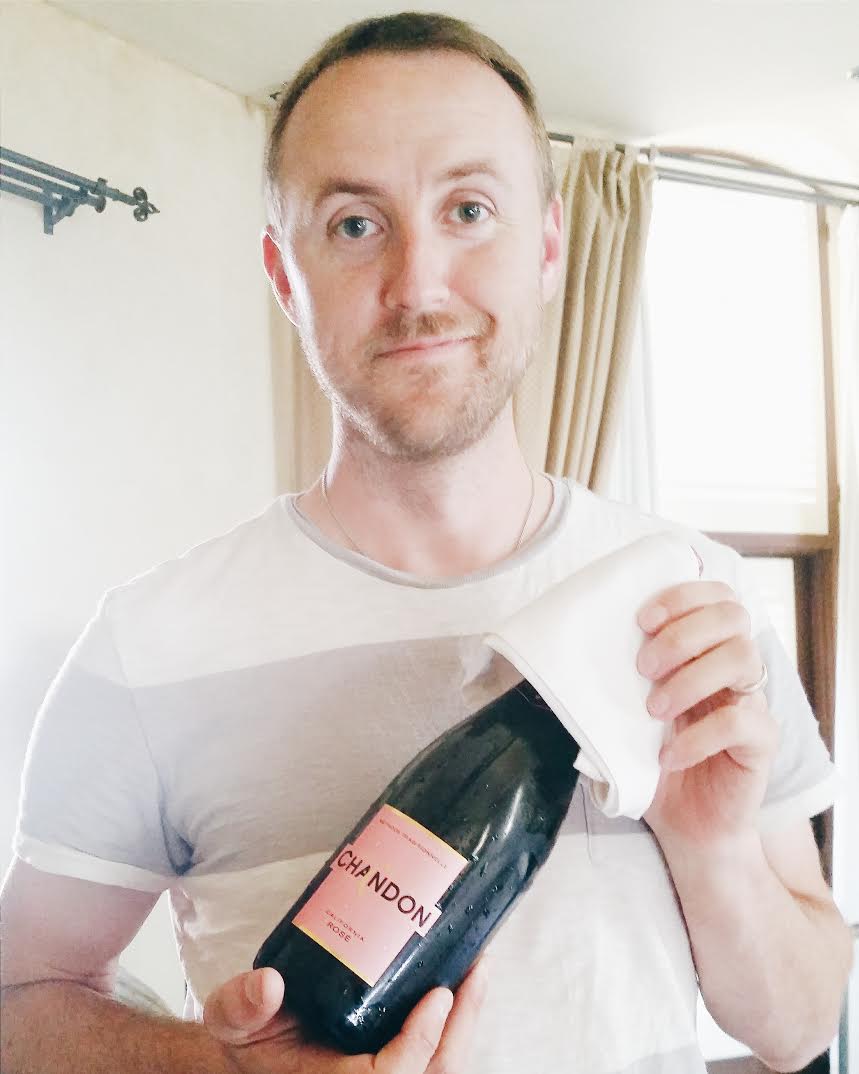 Neither of us are drinkers, but we both sampled a bit of it just so it wouldn’t go to waste. I genuinely dislike pretty much all forms of alcohol that I’ve tried, but I managed to down a (tiny) glass of this one without feeling like I had just imbibed mouthwash, so I’m calling it a win.

Before I could really even wrap my brain around it, it was time for Theo and I to hop back on the plane for Texas. If you follow along on social media, you know that I asked for prayer because I was a little nervous that Theo would have a bad flight after not feeling 100% for several days. And wouldn’t you know it? The very night that y’all prayed, he finally latched voluntarily (I had been doing a combo method of, well, many different things to get him to eat…none of which were kosher on a plane) and slept so much better than he had in the last 3 nights combined. 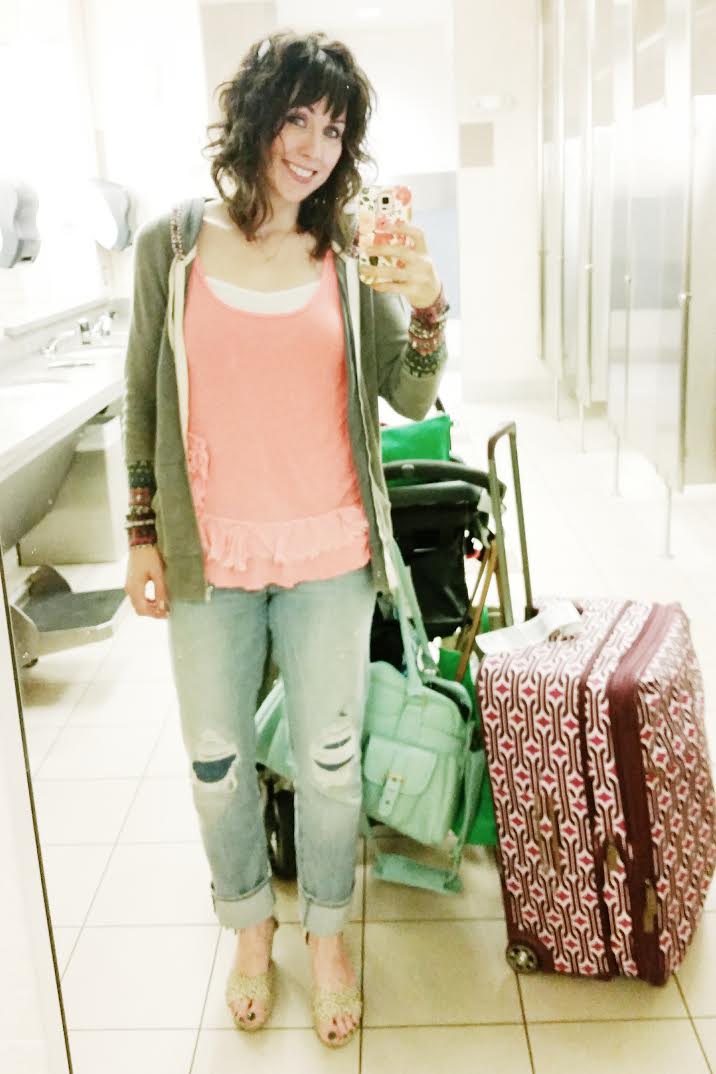 This DFW bathroom selfie comes to you courtesy of a very happy mama whose 5-month-old spent the entire ride back being ridiculously sweet (even if we did hang out in the bathroom/back of the plane as much as we could get away with just in case).

I was really ready to see the rest of my chitlins by the time I got home, but I was also so, so happy to have had some time away with my man (especially since I hadn’t seen him for longer than 72 hours at a time in a month).

And there you have it. More pictures and words about our anniversary trip than I’m sure you were ever hoping/thinking/expecting to receive (who are we kidding? If you’re a long-time reader, then you knew there were going to be words and pics aplenty).

But never fear! I will bombard you with yet more in the very near future.