In case you’re wondering, I have, in general, been sticking with the clean eating regimen that I established back when I did my 10 day cleanse.

Yes, I indulge in the occasional treat. I have had an Icee…or three (not at once, of course). I have added some dairy back into my diet (I had Greek yogurt this morning for breakfast…for the first time in for-evah), and I do eat bread eeeeeevery now and then.

Still. In general, I’m sticking with proteins and veggies and fruits.

When I’m on vacation.

Suffice it to say that, on our recent anniversary trip to California, we did not eat clean. We sure did eat gooooood, though. 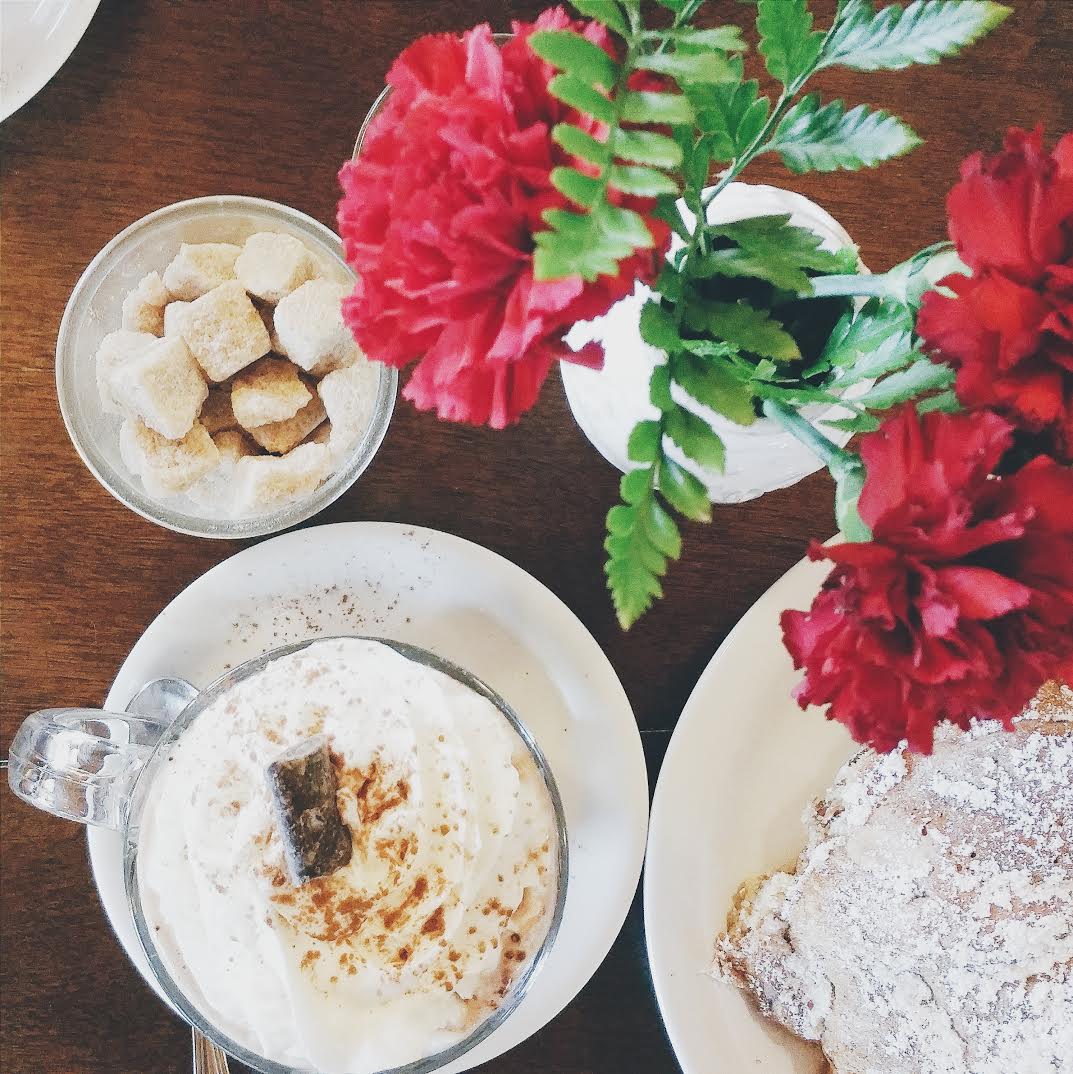 I wouldn’t necessarily say that we’re super-adventurous sorts when it comes to food. We don’t go in for the squid or the fried alligator. But we still like a fair bit of variety, and we do a collective happy dance (choreographed, of course; I’ll have to video it for you sometime) when we find a unique, well-rated, delicious little place that serves not-completely-conventional food.

When I posted about some of our food adventures on Instagram, I immediately got asked the same question multiple times: “How do you find these places?”

And the answer is easy: Yelp.

That’s right, you just cup your hands around your mouth and emit a high-pitched noise, and the restaurants, they just appear. 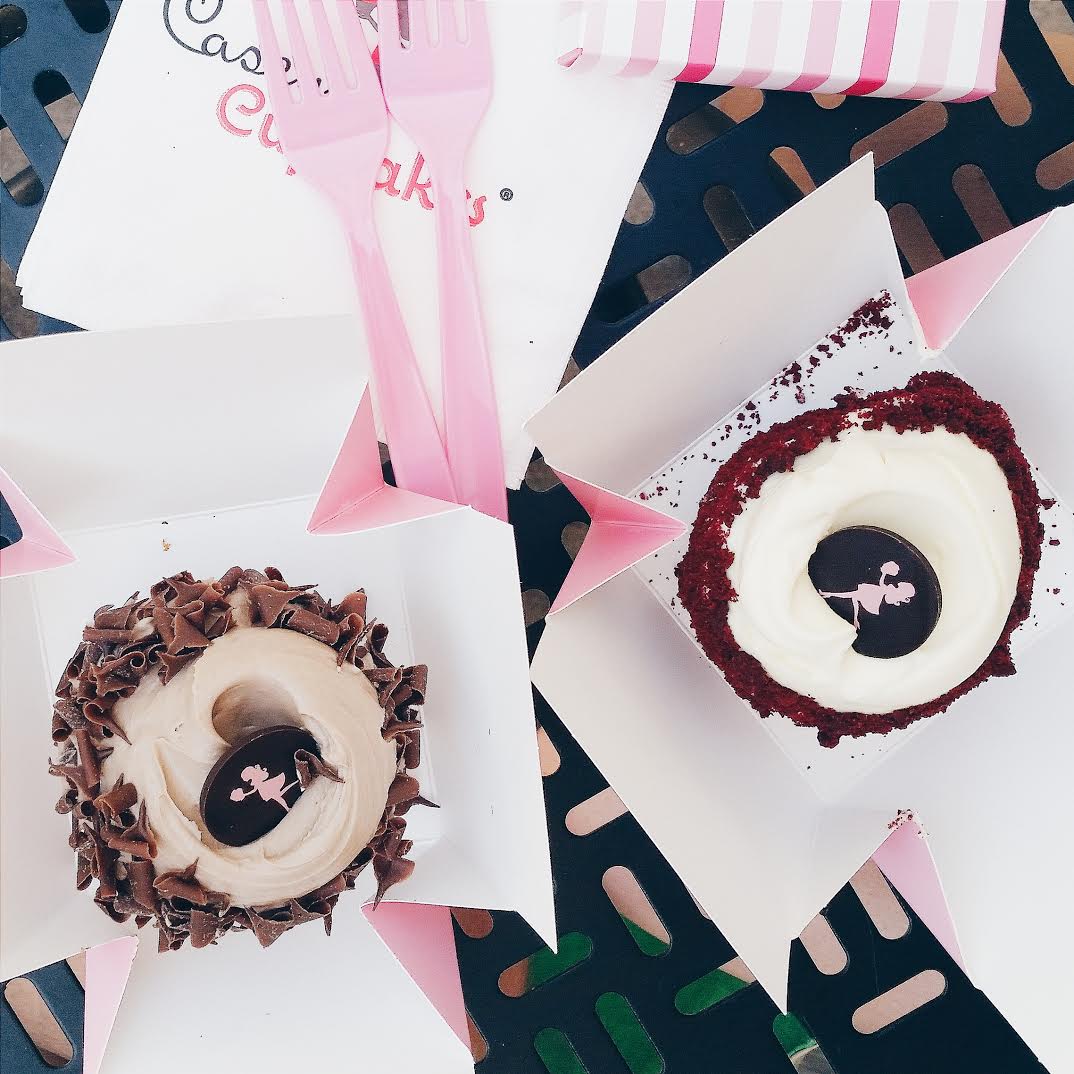 No, but seriously, if you’re into really good food while you travel (or even if you just want to find the best places in your hometown), download the Yelp app and get to browsing. You can narrow your search by all kinds of factors including price, whether the restaurant’s open during your search time (good for those times when you pull into town at 10 PM, and everything looks dead), and food genre.

TripAdvisor is great too, but Yelp is just really nice for an uncluttered, streamlined restaurant rec app. Plus, I find the reviews to be more accurate and consistent than those on UrbanSpoon or Google. (Where it’s not uncommon to encounter: “BEST. FOOD. EVAH.” right on the tails of: “Total dump. Never go here. I think I’ll bomb this place.”) 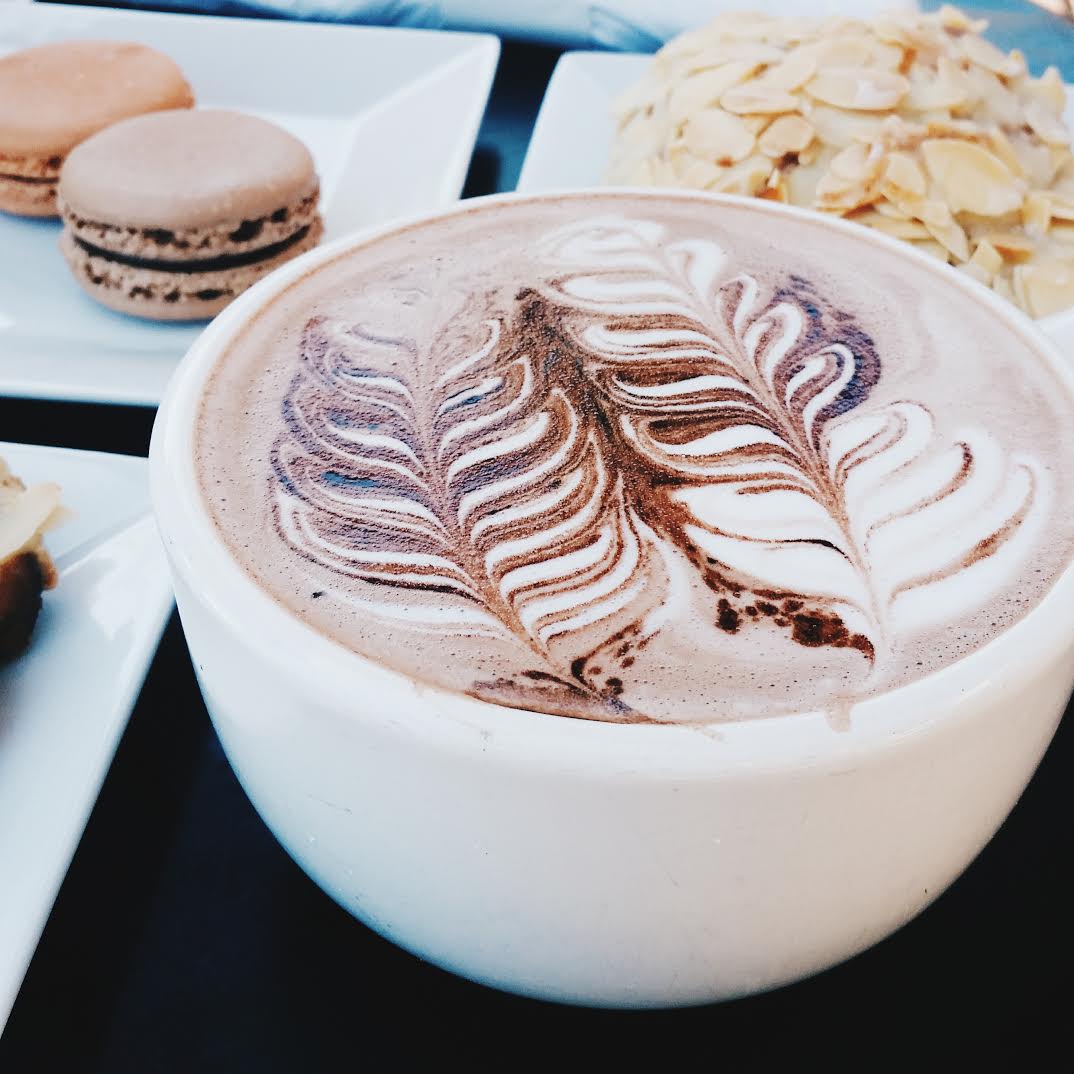 {That ho-cho tasted as good as it looked. Mmmmm}

ANYhoo, we ate like kings, beginning with a dang good falafel. Our trip basically started with our muscling our way through San Fran traffic on a Friday afternoon (I highly recommend it…if you want to be late to wherever you’re going…and then to whatever you might have planned after that too).

As we crawled (inched?) along, we both noticed an Olive Garden on our left, and (discovered later that) we both thought, “Ooooooh. Salad and breadsticks. I could really go for that right now.” But we were both too embarrassed to admit that we wanted to start out our 10 year anniversary trip at a chain restaurant just because we were too hungry to wait for the good stuff. By the time we figured out our mutual bourgeois-ness, it was too late. Because while parking spots are about as common tripled-winged unicorns, NO U TURN + NO LEFT TURN signs abound. And making 14 right turns (don’t even do that math) to fight our way back for lukewarm bread + soggy salad (see how our perspectives changed the millisecond we passed it?) just didn’t seem worth it. 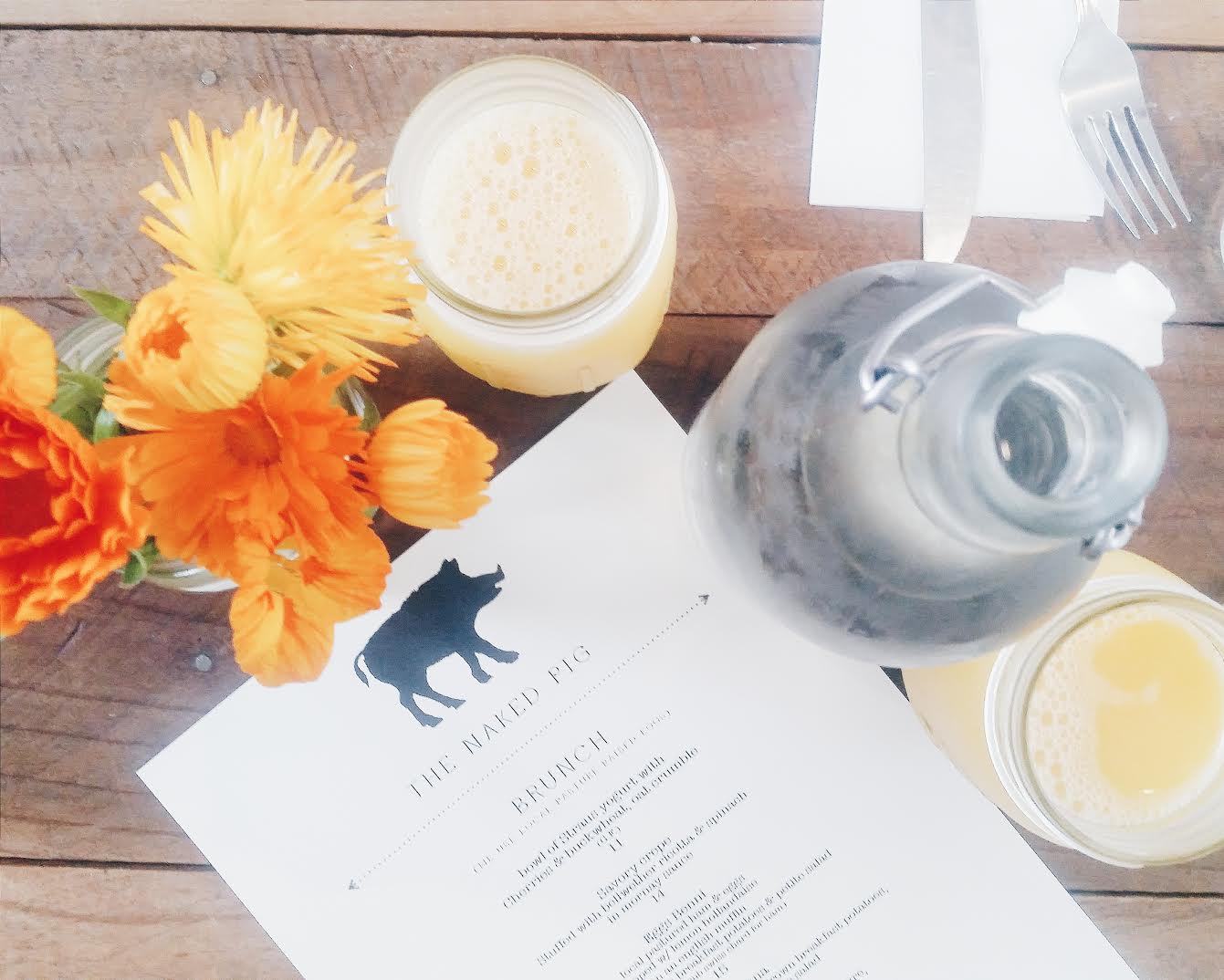 So, I hopped on Yelp, and we found a falafel shop with rave!! reviews that was only 1.3 miles away…and then proceeded to spend the next 45 minutes getting there. Turns out, our location wasn’t accurate when it gave us our initial arrival estimation. So, friendly note there. Make sure your actual location is entered before you attempt to hit up that 5 star gourmet burger joint “just around the corner.”

Anyhoo, by the time we found ourselves on Market street in downtown San Francisco and realized that parking was nonexistent, we were too hungry and too determined to get us some falafel to care. Shaun dropped me off and circled the block until he found a temporary spot to squat (before being shooed off by a police car) and then circled some more while I waited in line for 5 minutes and then another 15ish for our food. 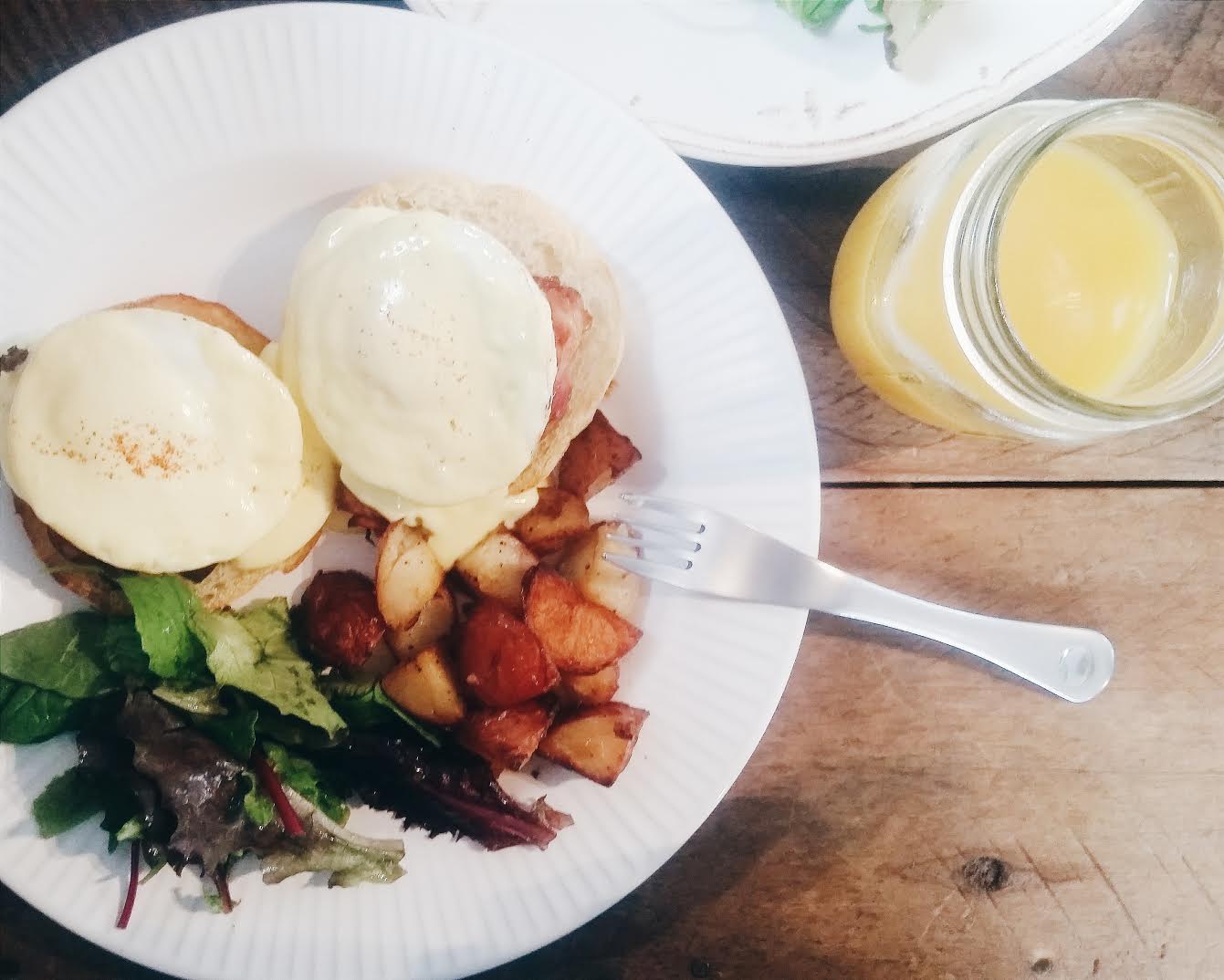 At one point, a lady stomped up to enter the door right next to the falafel stand (the Flying Falafel, in case you’re wondering), and, fixing all of us with a glare, spat: “I don’t know if you know this or not, but this door is not associated with the falafel shop. Which means that you all are loitering outside a private door. And you need to move…over THERE.” Flaps hands dramatically.

Me and my small-town Texas self uneasily inched away from the door, even though I was standing the farthest away from it and in no way blocking it.

Just glanced at her and then resumed their conversations.

So, Miss Indignant made a big show of shouldering her way through the “crowd” (it really wasn’t that bad, and no one was truly in her way) and huffed into her building. And then turned around to face us and hollered, “I’m talking to YOU PEOPLE,” through the glass door, while making all-encompassing circles with her arms.

I was still trying to appease her by taking a few more steps back (any farther, and I’d have been in the street). But this time, no one else even looked up.

And that, my friends, is how you spot a native San Franciscan. They eat their falafels with a side of crazy and don’t even blink. 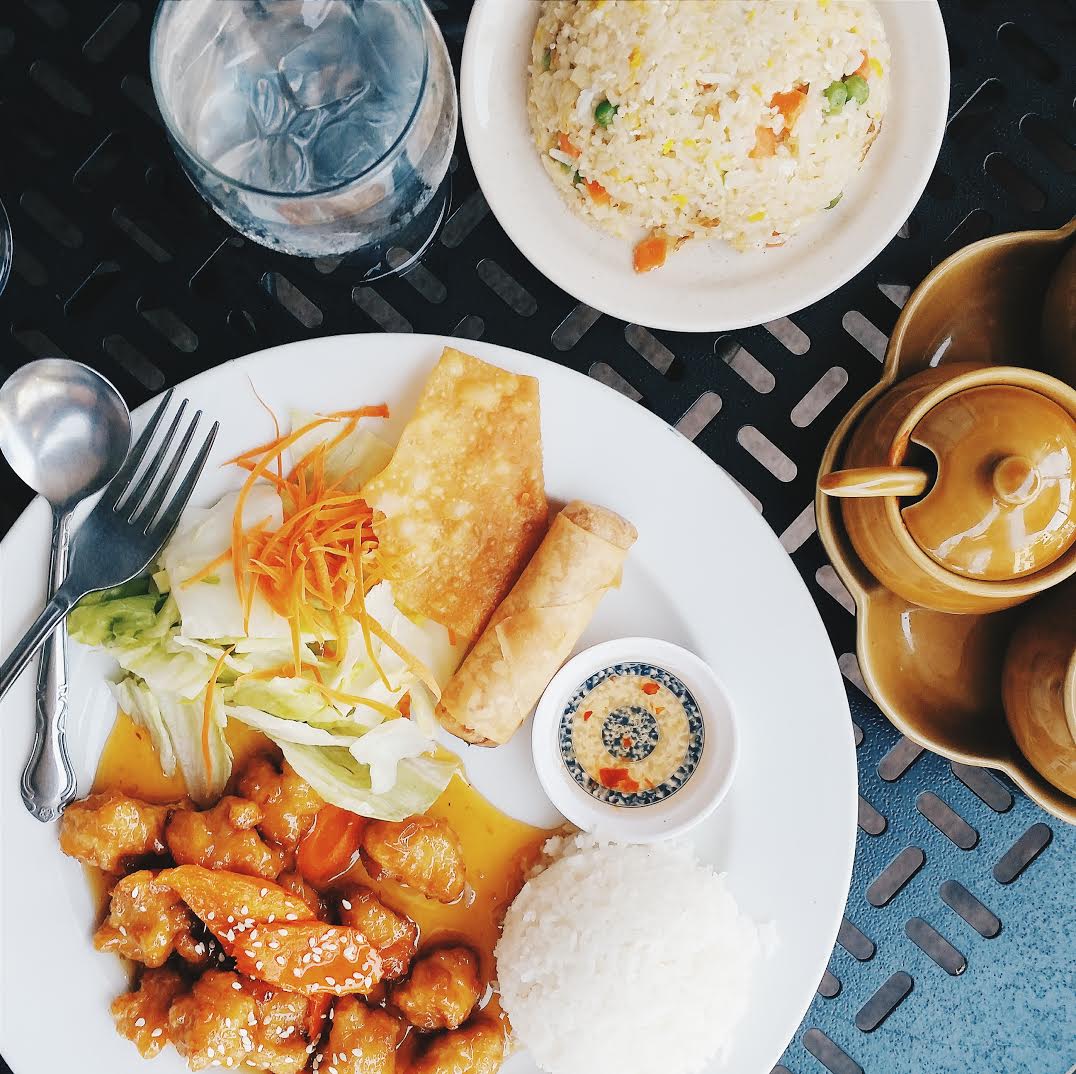 Speaking of the falafels, they were worth every last stomach growl and moment of Southern girl people-pleasing discomfort.

Seriously, yo. As hungry and tired and annoyed at traffic as we were, Shaun got halfway through his, and was like, “I am so glad we didn’t stop at Olive Garden. This is amazing,” and I was all: “Um hum, mmm hum, ggmmmmm.” Which is me agreeing with a really full mouth. 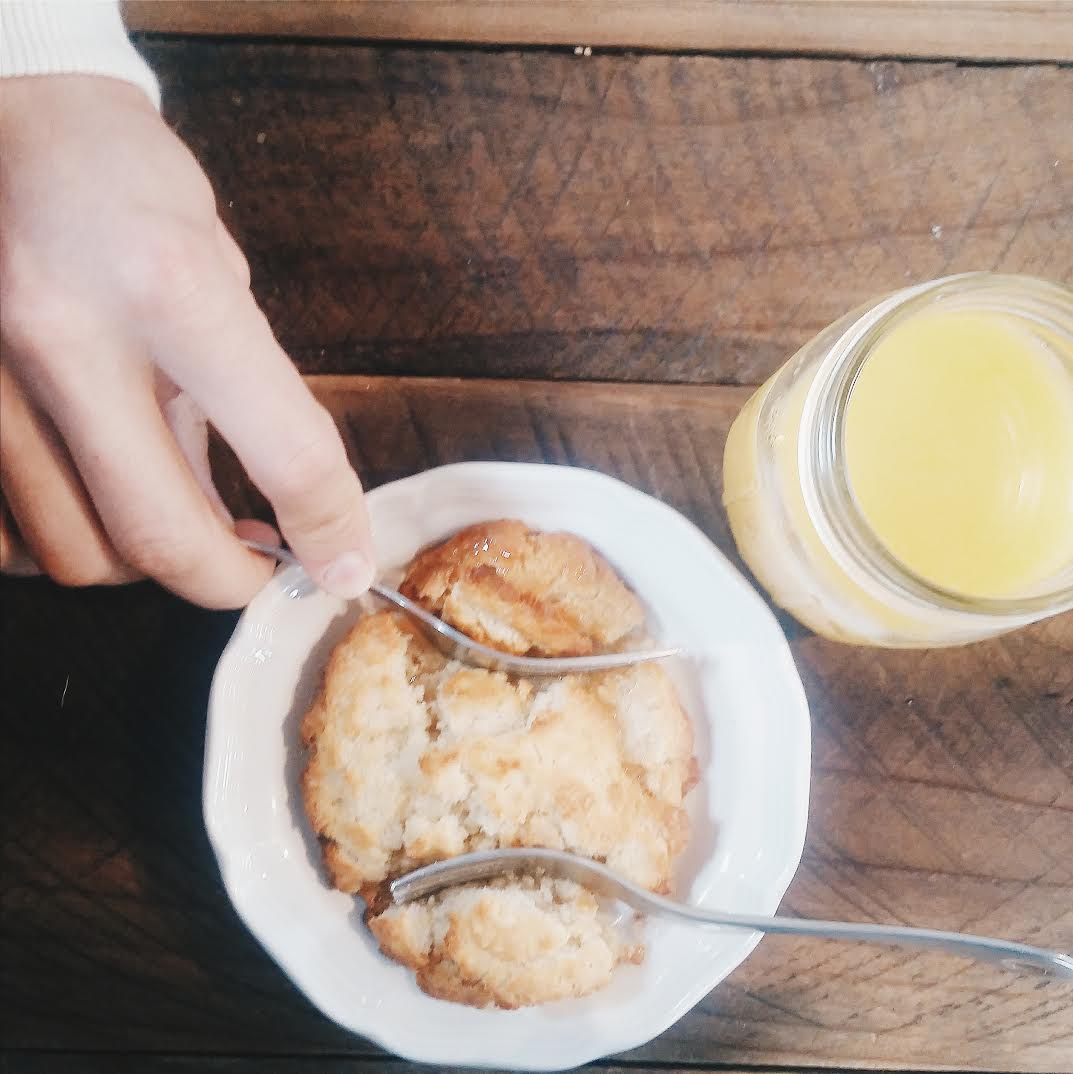 Just as satisfying was the Thai food that we ate and the farm-to-table brunch with the to-die-for Eggs Benedict and $4.50 drop biscuits (yes, EACH) and the gourmet pizza joint with the crazy-nice owner who made us a delicious pie at 10 PM. Oh, and we can’t forget the yummy Greek food, and the mouth-watering almond croissants, and the prettiest hot chocolate you ever did see… and.. and… and 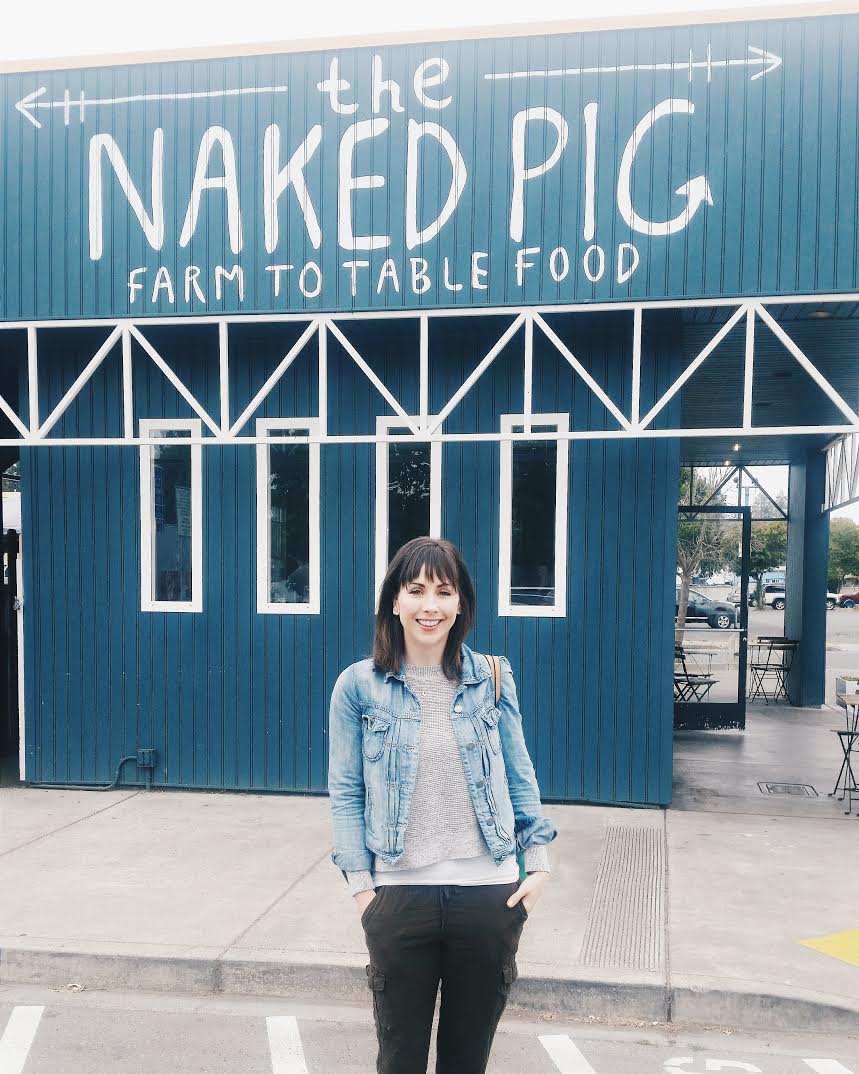 {This cute little place in Santa Rosa was fantastic. My bangs in this picture? Not so much}

Oh man, my stomach is rumbling just thinking about all of the goodness we consumed.

But maybe our favorite place on the entire trip–both for the food and the experience–was Crepes of Brittany on the Fisherman’s Wharf in Monterey.

It’s a good thing that place is nowhere near my house because I might be leave my husband and children to set up camp outside its door. If you read my European food recap from last year’s trip, then you know how deeply Shaun and I fell in love with both the crepes (sweet) and the galettes (savory) that we ate in Paris, but I kid you not when I say that these were at least as good. Maybe better. 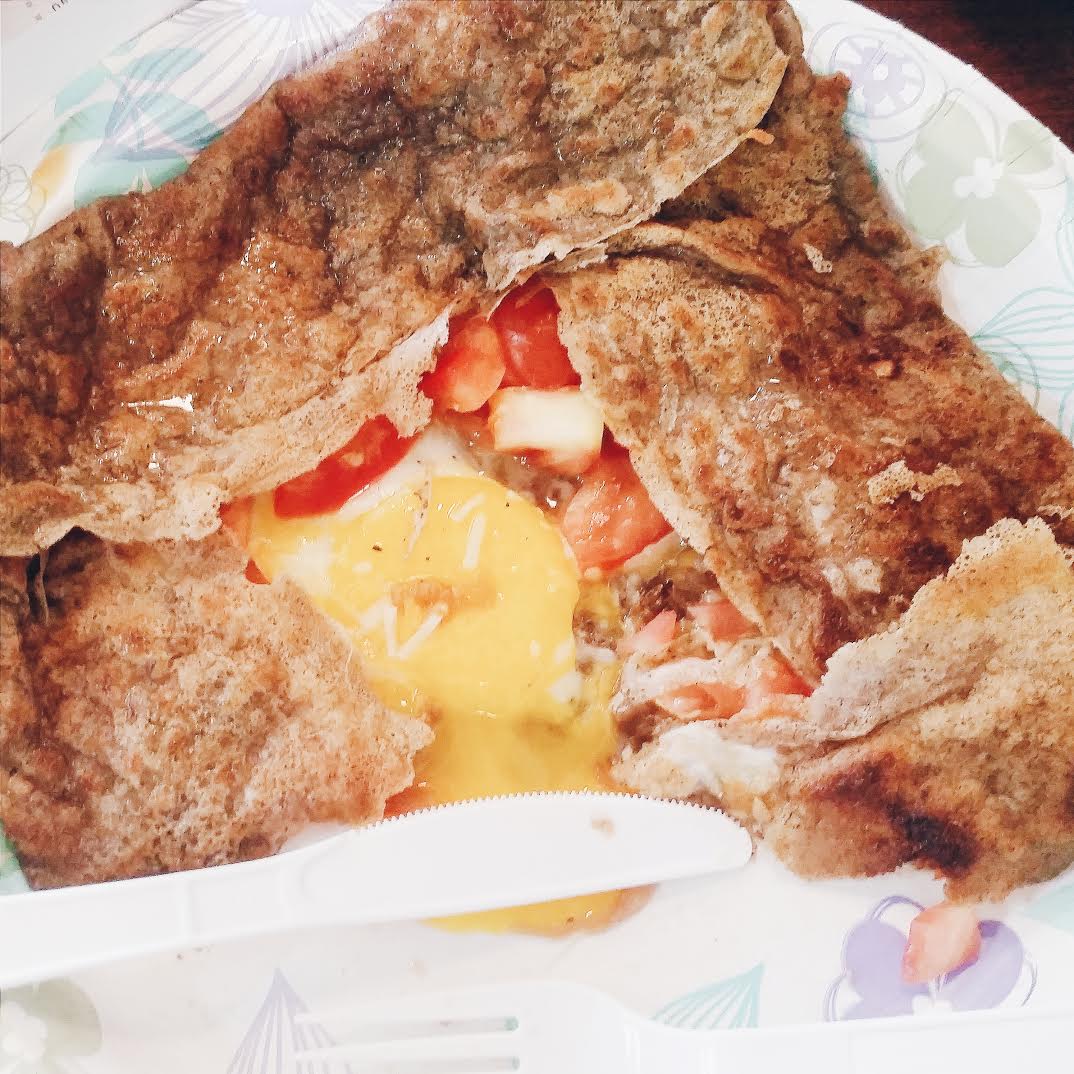 {A buckwheat galette with tomatoes, egg, and cheese = heaven}

Mostly because the guy who runs it–a stocky, middle-aged dude with tattoos all up his arms, closed-buzzed hair, and twinkly blue eyes–was born in France and still uses his mother’s crepe recipe, even though he hasn’t actually been back in 35 years.

The coolest thing, though, wasn’t the crepes, even as amazing as they were. It was his story. From the moment we walked in, there was just something about him–the way he met your eye, the way he expressed himself–that just shone, and it totally belied his tough guy look.

And then, while we were eating, I noticed that Christian worship music was playing in the background, and I was really surprised. In East Texas, I wouldn’t blink an eye. Probably 1/3 of the stores I shop in play Christian music. But in California? It definitely jumped out at me because it was so unexpected.

He came to our table to ask us how we liked our food (we gushed, of course), and I told him, “Oh, by the way. We love your music.” And he just fixed those bright blue eyes on me, smiled gently and said, “Thank you.”

When we got our dessert crepes, he brought us out a complimentary one (both were–oh man–soooooo good), and then he stayed a bit to tell us how he had been a contractor for 25 years, never known his dad, grown up rough and tumble and uneducated. He only made it through 8th grade, and reading gave him so much anxiety that he would pass his contracting company bills straight to his accountant, so he wouldn’t have to decipher them. (I would neverhave guessed this, considering how well he expressed himself).

But then, through a series of totally unsought after events, he ended up with this little crepe shop, and then one day, he came in contact with a Christian guy who gave him a Bible verse to read. So, he took it home and painfully worked it out. Then, the guy gave him another one. And another. And Terry (the crepe shop owner) said that by the third one, he had such a hunger to know more that he couldn’t wait for the guy to give him the fourth. He attended a Bible study with the man, and the Lord just ignited a ravenous need to know more of his Word and his ways in the pit of Terry’s soul, and he’s never looked back.

I know this post is supposed to be about food. But that moment honestly made the trip for both of us, I think.

To see the pure gratitude and joy that shone from this man’s eyes as he talked about how his growing relationship with the Lord has given him a completely different life–how he has learned to love his wife (because he never had a model of marriage to follow before) and his kids, how his life now has purpose and how he is able to see the way that God pursued him, even in the midst of his sin and self-seeking lifestyle (his description). How he’s going to take his entire family to meet his father for the first time in France this summer…

It was just awesome, and it did the heart of this girl who has known Jesus for over a quarter century and can get complacent all-too-easily some serious good.

I can’t express clearly enough how visibly the light of Jesus shone out of this man’s eyes, but it did. He wasn’t wild or ranting or jumping up and down and dancing. He was just at peace and full of joy. We told him we had noticed something different about him almost immediately, and he smiled and said, “I noticed it in y’all too. I don’t know why or how, but that’s why I came over.”

Oh, and his crepes were amaze-balls. So, there’s that.

So, what about you guys? Are you fellow Yelpers? Any other recommendations for ways to find good food? We’re taking a family vacation soon, and, even though we’re mostly going to be cooking (good food loses its flavor right quick when there’s a side of screaming toddler) we’ll definitely be scoping out some of the local eats too.