I’ve loved almond extract ever since I bit into my first twisty red and white candy cane cookie that my childhood best friend’s mom used to make every Christmas. She was a crunchy granola type, and I don’t think she used any processed white sugar in the cookies, but they tasted plenty sweet to me…with a hint of something mysterious and special and just plain scrumptious.

When I got older and discovered that said scrumptiousness had a name, I was determined to use almond extract in any baking recipe in which it might possibly make sense. I’ve since simmered down a bit, but there’s one recipe that I won’t make unless I have almond extract in the house, and it’s the one I’m sharing today. Which is funny because the recipe doesn’t even call for it. 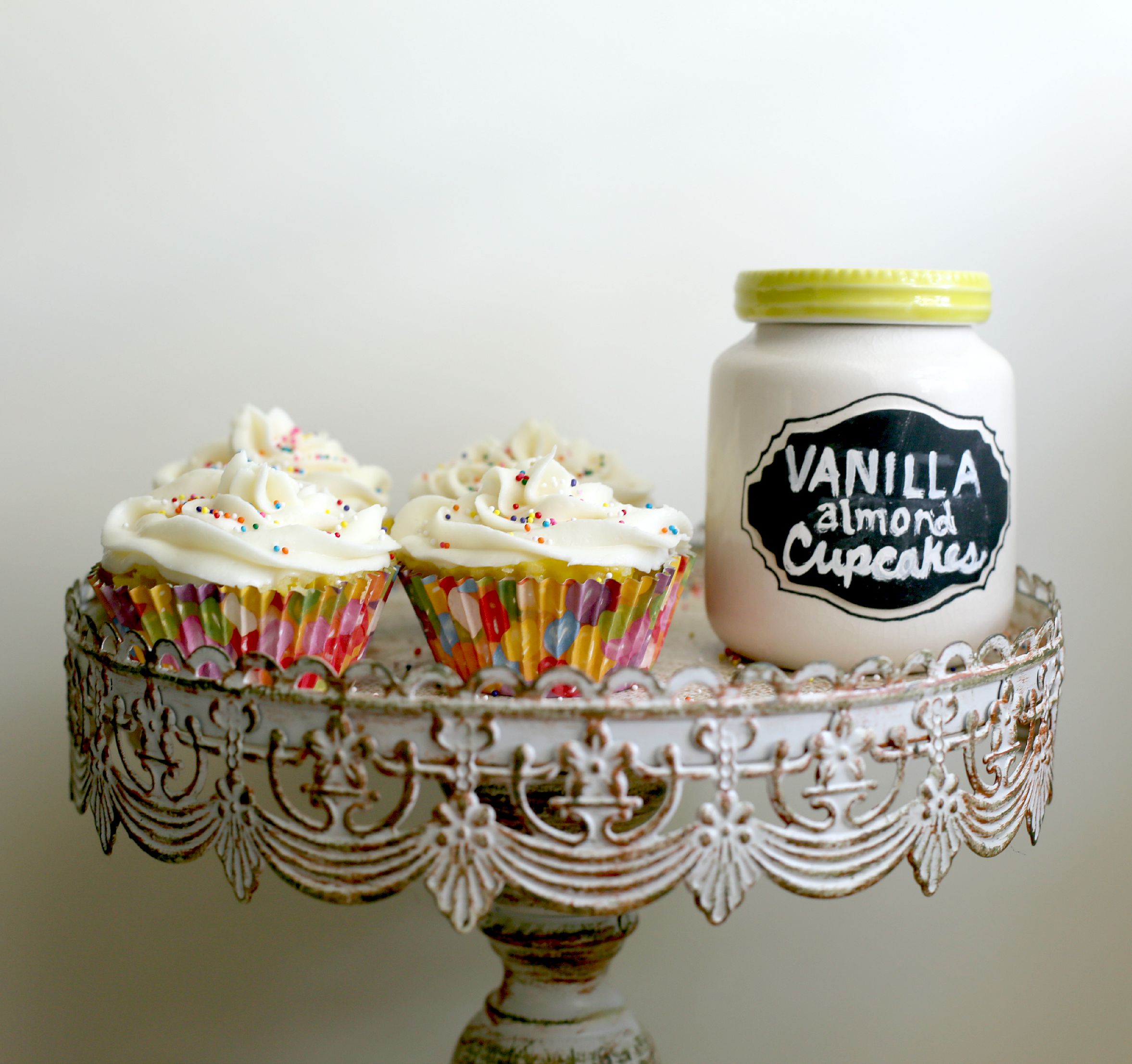 From scratch cake is hard, y’all. Done right, it’s way better than boxed cake, but getting the texture right is tricky, which is why I love how these cupcakes turn out–moist, fluffy, and yet dense and richly flavored.

To be honest, I don’t remember where I got the recipe. Online, I know, but where, I don’t. I copied and pasted it into a word document and printed it out 8 years ago when I made a “cake” in the shape of a flip-flop out of dozens of mini-cupcakes for my friend, Stef’s, going away party, and it got such raves that I made it for a baby shower next. 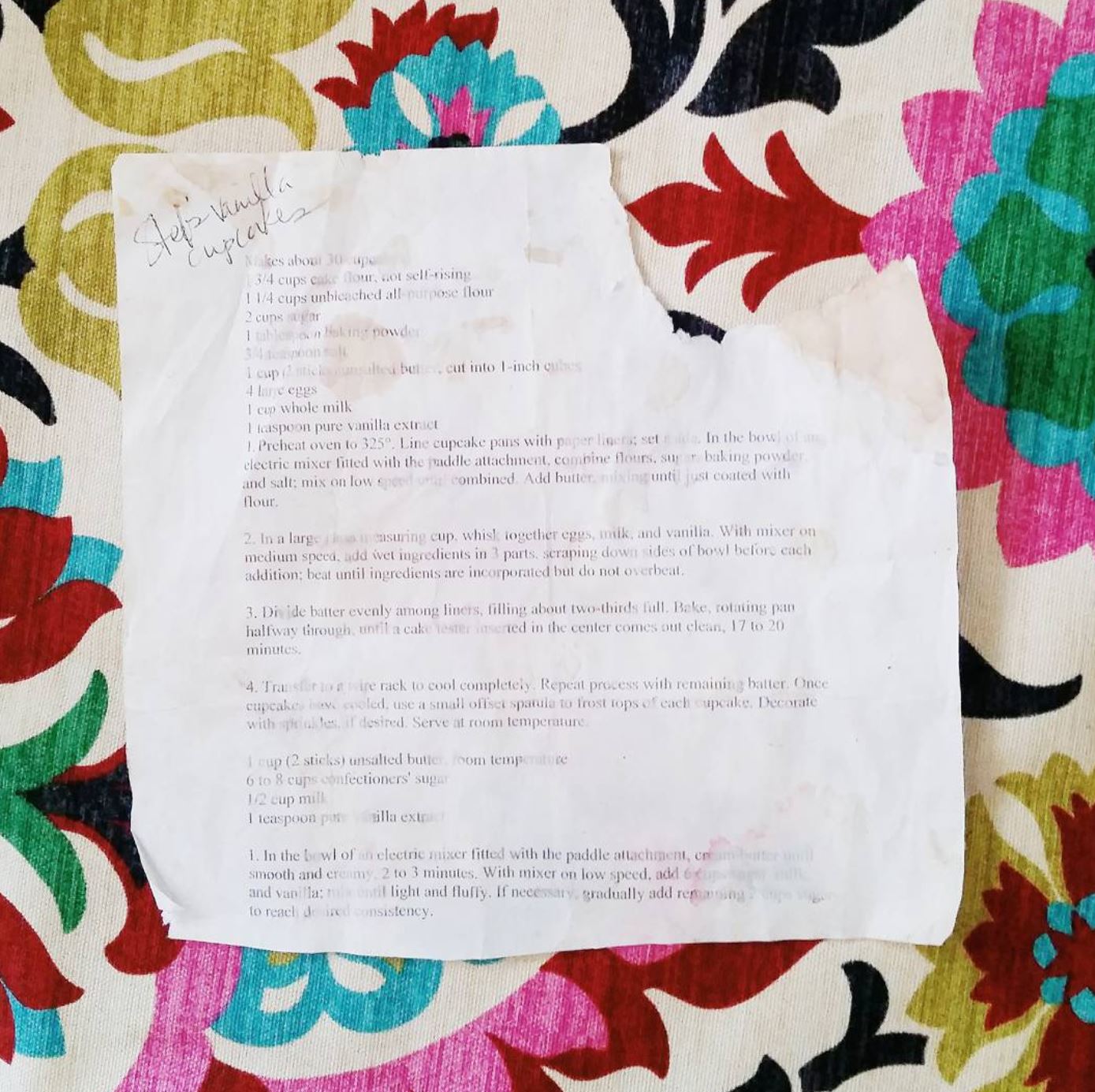 And then on and on. For 8 years, any time there has been an occasion that require’s vanilla cupcakes, I’ve whipped out my “Stef’s Cupcakes” recipe. (In case you’re wondering, the most recent “occasion” was last Friday night at 10:30 PM, while Shaun and I were watching a movie, and I got an itch to bake that only these cupcakes would scratch). 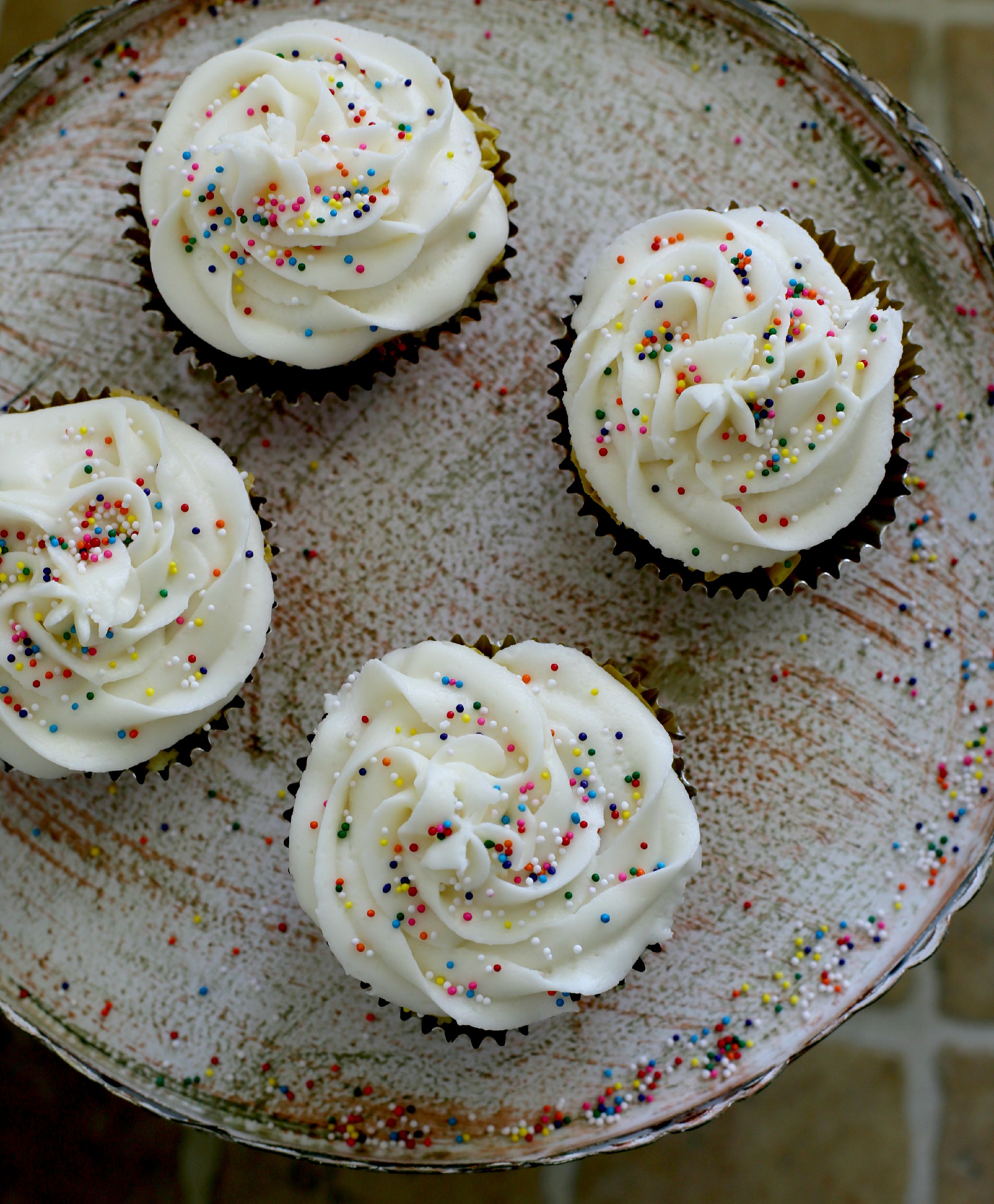 Which brings me to why I’m sharing it with you: a) because it’s really too good to keep to myself and b) because I’m afraid I might lose that ratty, stained sheet of paper, and then I’ll be up a major, vanilla cupcake-less creek without a spatula. Or…some other sort of mixed metaphor that not even I can follow.

A couple of notes:

1) In MY opinion, it’s the almond extract that makes these cupcakes, but if you have something against it, then you can just replace that 1/2 tsp with vanilla, and the results will be fine. And only fine. Don’t judge me or this recipe based on a version of it without almond extract.

2) These are at their absolute best as mini-cupcakes. They make such decadent, addictive little moist mouthfuls, especially when smothered in the cream cheese frosting recipe I gave you here. They’re also good as full-sized cupcakes and even as a layer cake; they’re just a little dryer.

3) This is a husband-pleasing recipe. Shaun LOVES these cupcakes, even though he’s not really a big cake person and tends to swipe most of the best part (aforementioned cream cheese frosting) off of the top. So, yes. Husband-approved recipe, in case you, too, have a hubby who is particular about his cake. 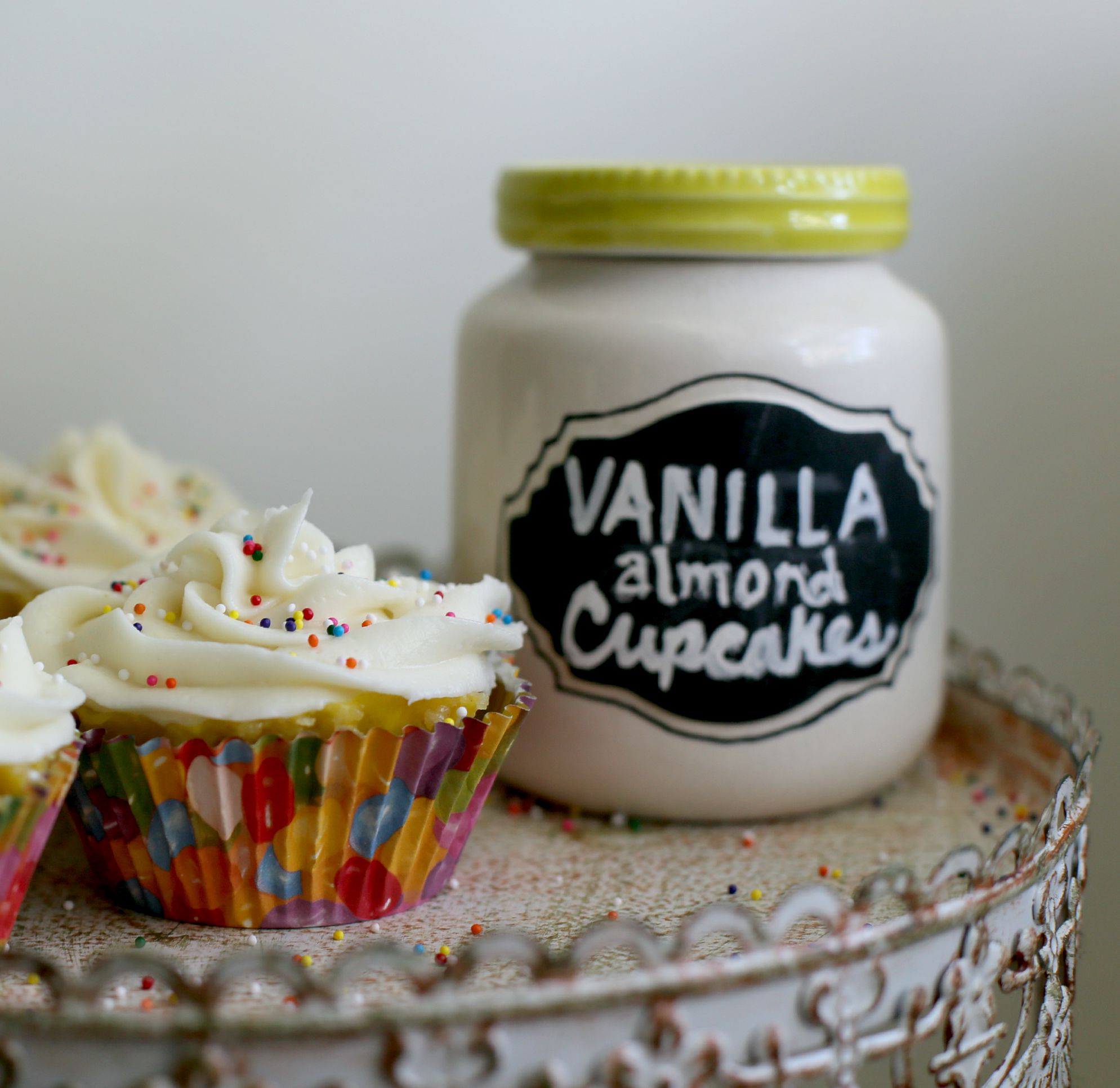 So, did you think I was going to make you scroll up and zoom in and squint at that snapshot of the recipe ’til you go blind? No such luck.

Here’s the full recipe (complete with my little almond extract addition, of course):

1. Preheat oven to 325 (F). Line cupcake pans with paper liners; set aside. In the bowl of an electric mixer fitted with the paddle attachment, combine flours, sugar, baking powder and salt. Mix on low speed until combined. Add butter, mixing until just coated with flour.

2. In a large glass measuring cup, whisk together eggs, milk, vanilla, and almond extract. With mixer on medium speed, add wet ingredients in 3 parts, scraping down the sides of the bowl before each addition. Beat until ingredients are incorporated, but do not over-beat.

3. Divide batter evenly among liners, filling about 2/3 full. Bake, rotating pan halfway through, until a toothpick inserted in the center comes out clean. About 17-20 minutes for full-sized cupcakes, and 9-12 minutes for minis.

4. Transfer to wire racks to cool completely before frosting.

Note: I’ve had these cupcakes with pretty much every kind of frosting under the sun, and they’re fabulous with all of them…but cream cheese will forever be my favorite.