I’ve admitted here several times before that I’m not a naturally organized person. That is not to say that I am not organized. I have places for things in my house. And each year, I get a little better about figuring out what makes sense for the way my brain organizes. But it doesn’t come easily for me.

So, when I implement something super-simple and super-effective, I just have to share…even if only for those who are similarly organizationally challenged.

So, here’s the deal: our laundry situation really isn’t that bad, considering how many of us there are. I probably shouldn’t even admit this, but…I don’t feel like I do laundry all. the. time.

Yes, I do a lot (DUH…there are 8 humans in this here house, including at least 3 who have a tendency to soil their clothes on a thrice-daily basis with an abundance of various bodily fluids), but I (usually) do a couple of loads every other day or so, and the kids have gotten really rather good at knocking out the folding/putting away in 1/2 an hour of so.

As much as I’m happy to report that we’ve found a system that works for us, I will say that our stacking/putting away process has left a bit to be desired.

Why? Because I only have 2 laundry baskets, and both of them are always tied up holding the dirty clothes in the laundry room.

After watching my kids make 14 trips up and down the stairs for the 136th time and dealing with the leaning towers of laundry piled on beds and chairs until they got put away (assuming that they didn’t get knocked over and completely muddled in some sort of spontaneous dance party, which is just as likely as not), I fiiiiiinally put “laundry baskets” on my shopping list. 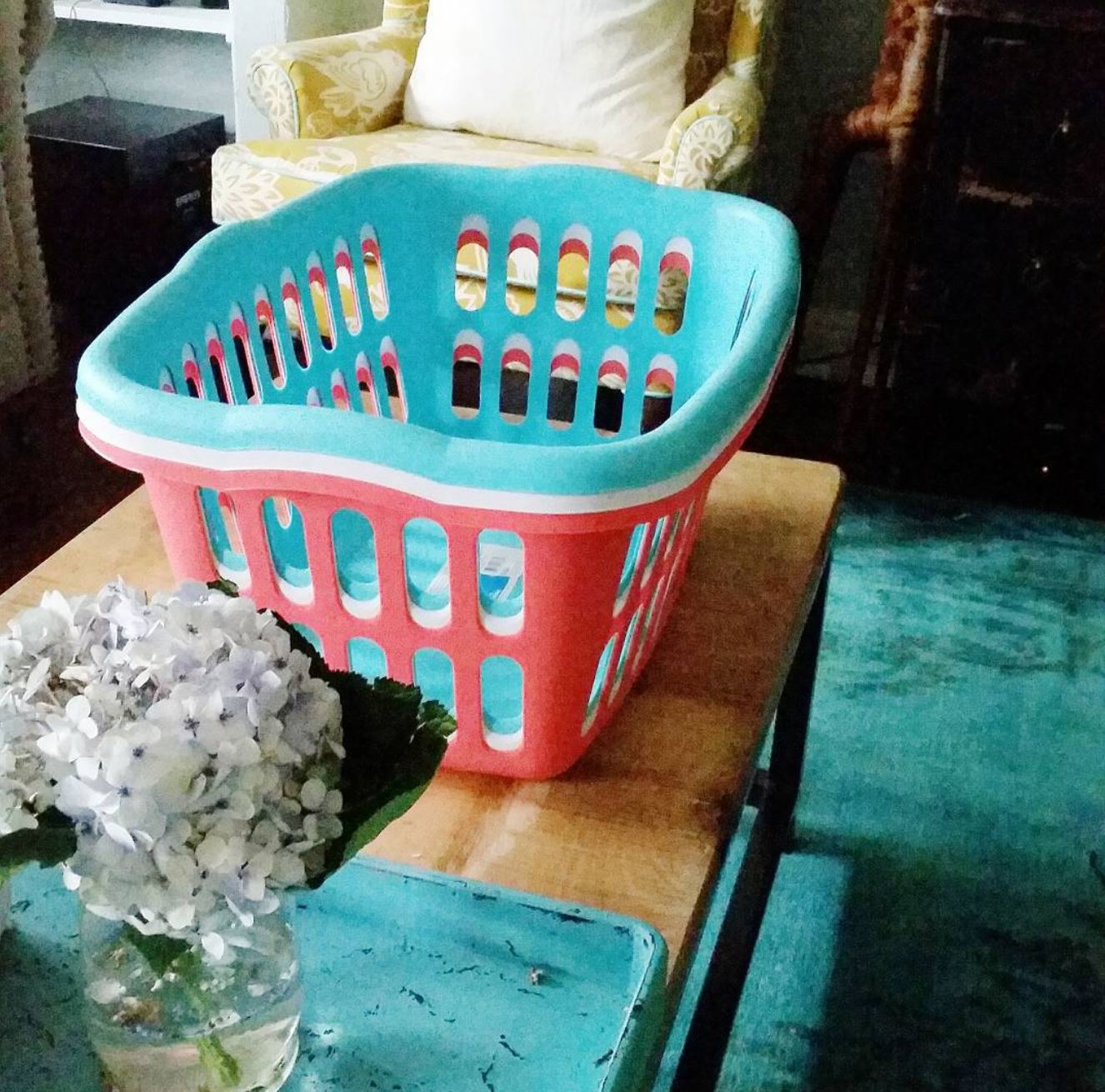 It only took me 3 or so trips to various places that carry laundry baskets to actually remember to buy them, but it did finally happen on one trip to Target when my memory was jogged by the sight of a bright coral basket.

I honestly hadn’t thought through color options, but the second I spotted the coral one, something clicked in my brain, and I thought, “I should get a different color for each group of laundry.”

I’m almost sure I would have gotten all white if I hadn’t thought it through, but, instead, I grabbed one coral, one white, and one turquoise.

Not too surprisingly, the coral holds the girls’ clothes, the turquoise holds the boys’, and the white one goes to our room.

Obviously, there are towels and various other things that don’t go to just one location, but the color-coding + corralling of all of the clothes, at least, has made SUCH a difference in our laundry efficiency. 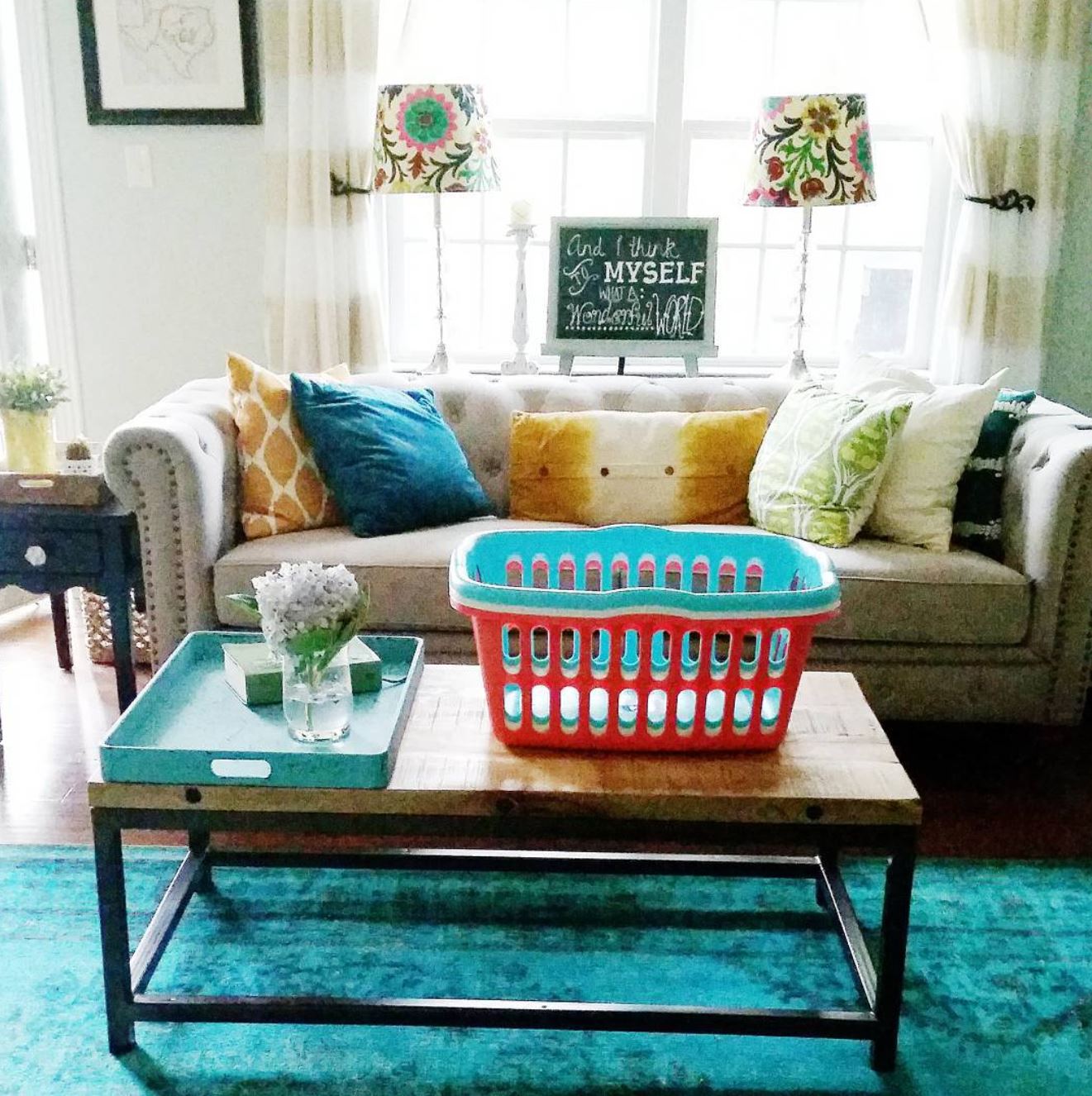 We make fewer trips up and down the stairs, drop fewer clothes, mess up fewer piles, end up with fewer wrong clothes in wrong rooms, and have MUCH less confusion about which pile goes where (little boys/girls are not naturally organized either).

The results are really nothing short of magical for a single trip to the grocery store + $12 worth of supplies.

Again, I’m sure this is child’s play to most of you. But it’s been a game-changer for us.

And game-changers are always worth sharing, in my opinion.

What about you guys? Any laundry (or other) Mama life hacks to share? Don’t forget to hashtag any shares on social media with #mamalifehacks so I can feature them! 🙂