Last week, when I posted about my little laundry epiphany (color-coded baskets…duh), a reader (hi, Kristin!) unleashed this bomb of a #mamalifehacks tip on me, and I don’t think my life will ever be the same.

But my couches will!

Or at least sum up. #namethatmovie

A couple of mornings ago, Simon sauntered into the kitchen from the living room with a handful of blueberries. At first, it didn’t quite register, but then I was all: “BLUEBERRIES? HOW did you get blueberries in the living room?”

And *I* was all calm and collected and reasonable.

What I really said sounded something like SIMON!!! AREYOUTRYINGTOTELLMETHATYOUSAWYOURTWOYEAROLDSISTERWITHBLUEBUERRIESINTHELIVINGROOMANDYOUDIDN’TTELLME????!!!!!

And then, I raced around the couch to discover that, sure enough, Nola had an entire leaking carton of blueberries on my couch. The couch in the main thoroughfare of our house  that I’ve been keeping covered at all times for just such a catastrophic event but which my 9-year-old had, only moments before the blueberrypocalypse of 2015, denuded of its constant cover when he dragged it onto the ground and cocooned himself in it because, “I’m cold.” (Side note: it’s a good thing we don’t live in Michigan or Canada or, I don’t know, Kansas. The child clearly wouldn’t survive the winter).

ANYhoo, as I surveyed the damage (which, admittedly, wasn’t nearly as bad as it could have been but still warranted a fair bit of panic because blueberries), I mentally berated myself: “See? You knew this would happen. This is why you don’t buy light-colored linen couches, no matter how good of a deal they are.”

Are you ready? (No, Abbie, I’m not. Please drift off into yet another random tangent, why don’t you?)

Kristin imparted the wisdom of all wisdom that…

Boiling water will take any fruit stain (yes, even blueberries) out of anything.

I don’t have a tea kettle, so I grabbed a glass bowl, sloshed a little water inside, and then microwaved that sucker for 1 whole minute.

I could barely hold the bowl without burning my fingers when I pulled it out, so I figured it could definitely pass for boiling.

And then do you know what I did? I poured the scalding water directly onto my blueberry besmirched couch. (Side note: besmirched is a fun word)

I would show you a before and after, but I didn’t have the forethought for any such thing. I was too busy trying to perform my cleaning CPR.

But you know what?

It TOTALLY, COMPLETELY and UTTERLY…worked.

I dumped another bowl onto the (pretty much invisible) stain, just to be sure, then sopped up the water with a towel and let it air-dry. I came back an hour later when it was completely dry, just to make sure, and couldn’t find even a trace of blueberries.

Speaking of scores, I found this adorable romper for Della at Children’s Place for $3. 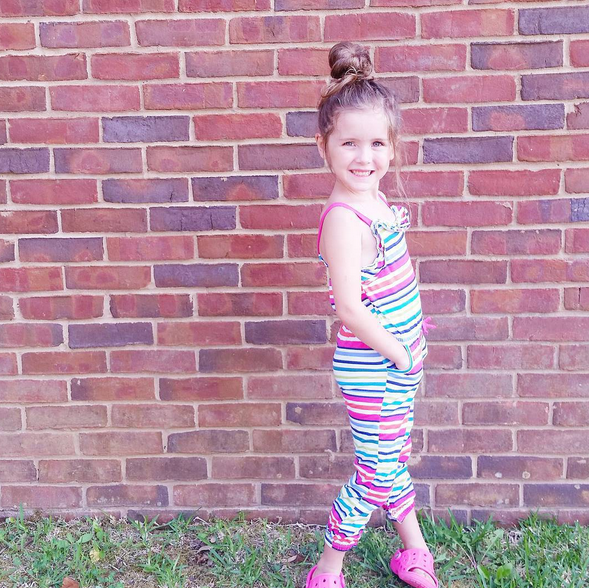 But, of course, the first time she wore it, she wanted to eat strawberries (because the things that stain the most must always be eaten when the clothing is the newest, apparently), and it was time to  leave for the gym, which meant no time to offer her a non-staining snack like…sorry…my brain apparently lacks the ability to conjure even the concept of a non-staining snack for a 4-year-old who still rubs her hands aaaaallll the way down her front after every third bite of anything she eats. (Who needs napkins when clothes have already been invented? Save the planet, y’all. Wear a shirt).

So, OF COURSE, as we were getting out of the car to go in the gym, I noticed that she had a strawberry stain on her front. I was honestly impressed that there was only one, and it was relatively small, but still. It was a strawberry stain. And I didn’t have any boiling water handy. AND I think the 4-year-old encased in the stained garment might have objected just a little had I dumped said boiling water down her front.

Which meant that that stain was going to be left to dry and burrow its way deeeep into the fibers of her brand new romper.

I was kind of excited about this, honestly, because I wanted to test out Kristin’s trick on a rubbed in stain, and I was all prepared to take before pictures this time.

Here we have the romper besmirched (see? fun!) with hours old strawberry stains. 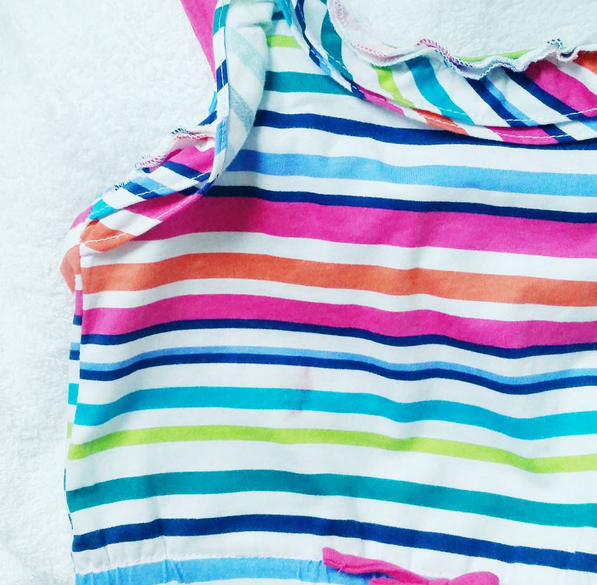 And here we have it, three small bowls of boiling (microwaved) water later. 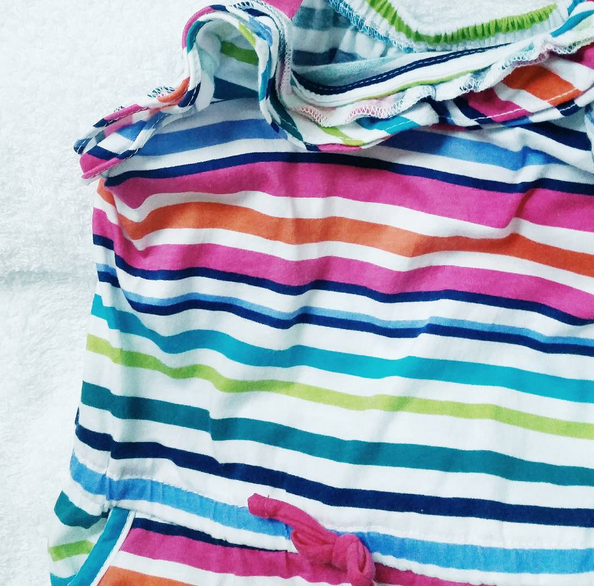 I didn’t scrub. I didn’t use soap. I didn’t do anything but douse it in really hot water and try not to burn myself. 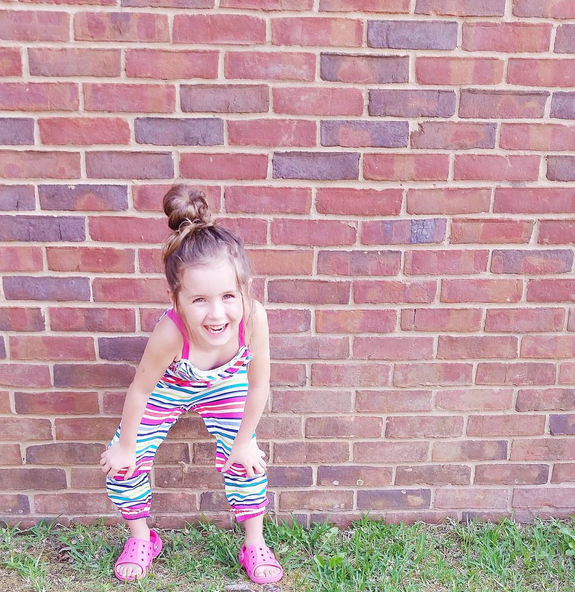 And we’re just a little excited about it. 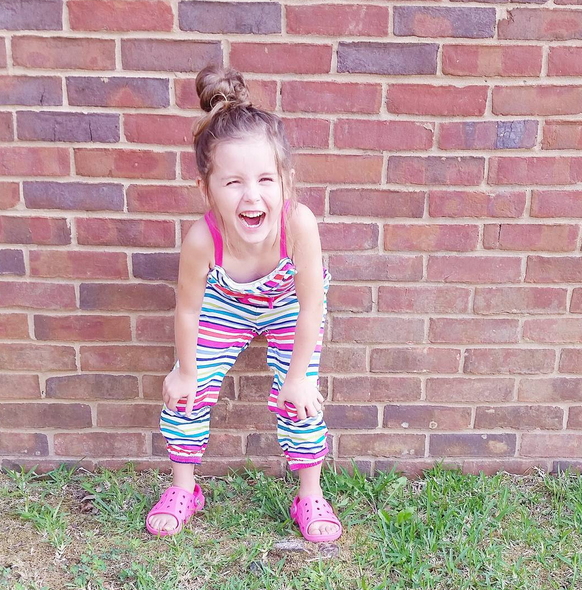 Okay, maybe more than a little.

I’m so jazzed about this development that I’m kind of looking forward to the next time one of the twins drops an orange slice on her shirt, catches it halfway down, and proceeds to draaaaaag it the length of her torso all the way back to her lips (an occurrence that usually makes me want to put my head through the wall).

So, did you already know about this magic? If so, whyyyy didn’t you tell me? I’m so glad Kristin had my back.

Any other #mamalifehacks to share? I’m all ears (and a few slightly burned fingers).

P.S. Have you entered our oily giveaway yet? You’ve got til midnight!

P.P.S. Have you entered our pouch giveaway yet? You’ve got–you guessed it–until midnight for that one too!