I feel like the title of this post belongs on the cover of some 1940’s Gibson Girls magazine right next to: “How to Achieve the Perfect Finger Wave.”

But regardless of any retro vibes, I dare any 1940’s woman to wield a glue gun with as much modern day panache as…someone besides me.

Me? I burn myself a lot.

ANYhoo, as a quick refresher, here’s what this corner of my living room looked like not too long ago (when I shared my tufted couch coup with you). 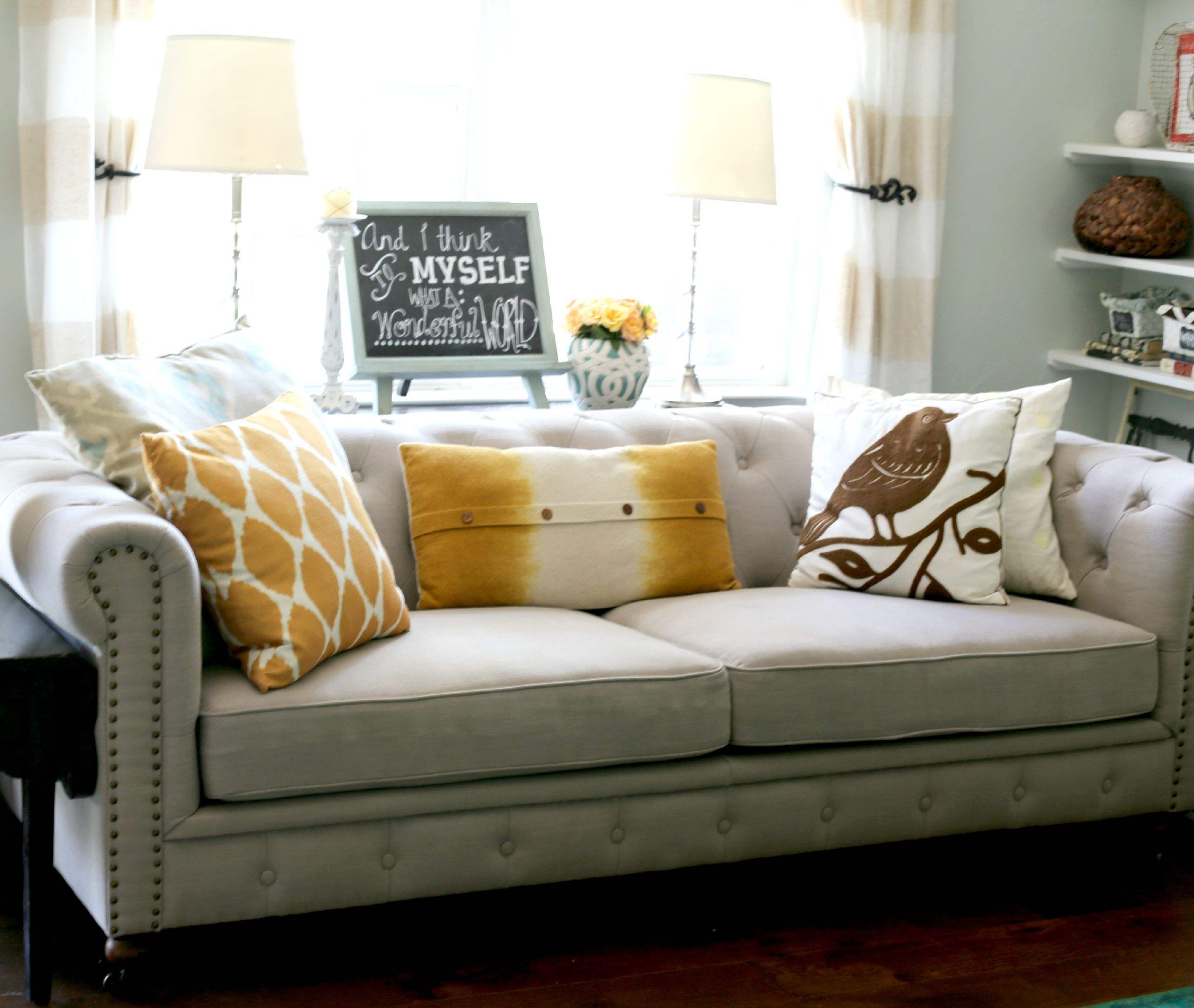 Nothing wrong with it. Nothing at all. I see my dream couch, fun pillows, my favorite chalkboard that I refuse to erase because I do not think I will ever create a better one (not saying it’s that great…just good for my limited skills).

But, if you’ve been following along for any amount of time…you might be a little thrown off by one thing: there’s not much color.

I mean, yes. There’s lots of yellow in the pillows, but the couch, curtains, and lamps are all pretty monochromatic, which is quite unusual for me.

And which I was determined to remedy.

I’ve had those lamps for years now, and I still love them, but long periods of dust accumulation (in between their yearly dusting…ahem) plus some kidhandling (similar to “manhandling” but worse) had left the white shades a little worse for wear.

Plus, they were just a little…blah (hence my throwback post title).

So, what did I do? I dug into my trusty (read: likely to swallow you alive) fabric stash, selected a winner, got my craft on, and came up with this: 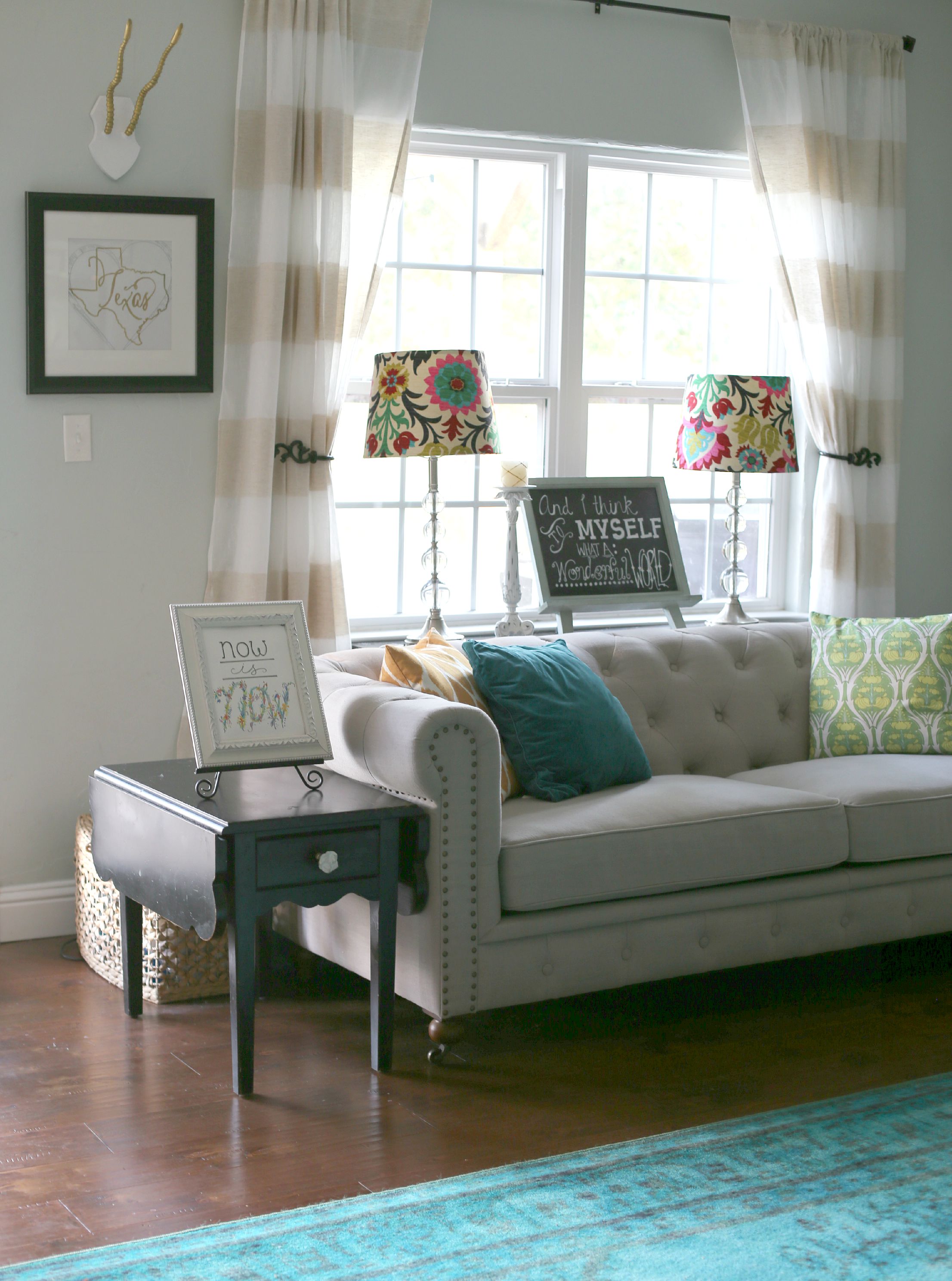 I say that as if I cranked it out during one nap time session, while “Let’s Get Ready to Rumble” blared in the background, but the honest-to-goodness truth is that I limped along with 15 minutes here or there until I finally managed to finish them off and grab some pictures last night while my kiddos watched the Aristocats for “family movie night” (Shaun’s traveling, so it was more like Kid’s Movie Night/Mom’s Craft Frenzy).

They were an easy project, but just in case you’ve never recovered lampshades yourself, I thought I’d share a blow-by-blow. Because I’m helpful like that.

First up, here’s what you’ll need.

Place your lampshade on its side on a large piece of white tracing paper. I happen to have a huge roll of this, but you might need to tape several printer sheets together if you don’t. 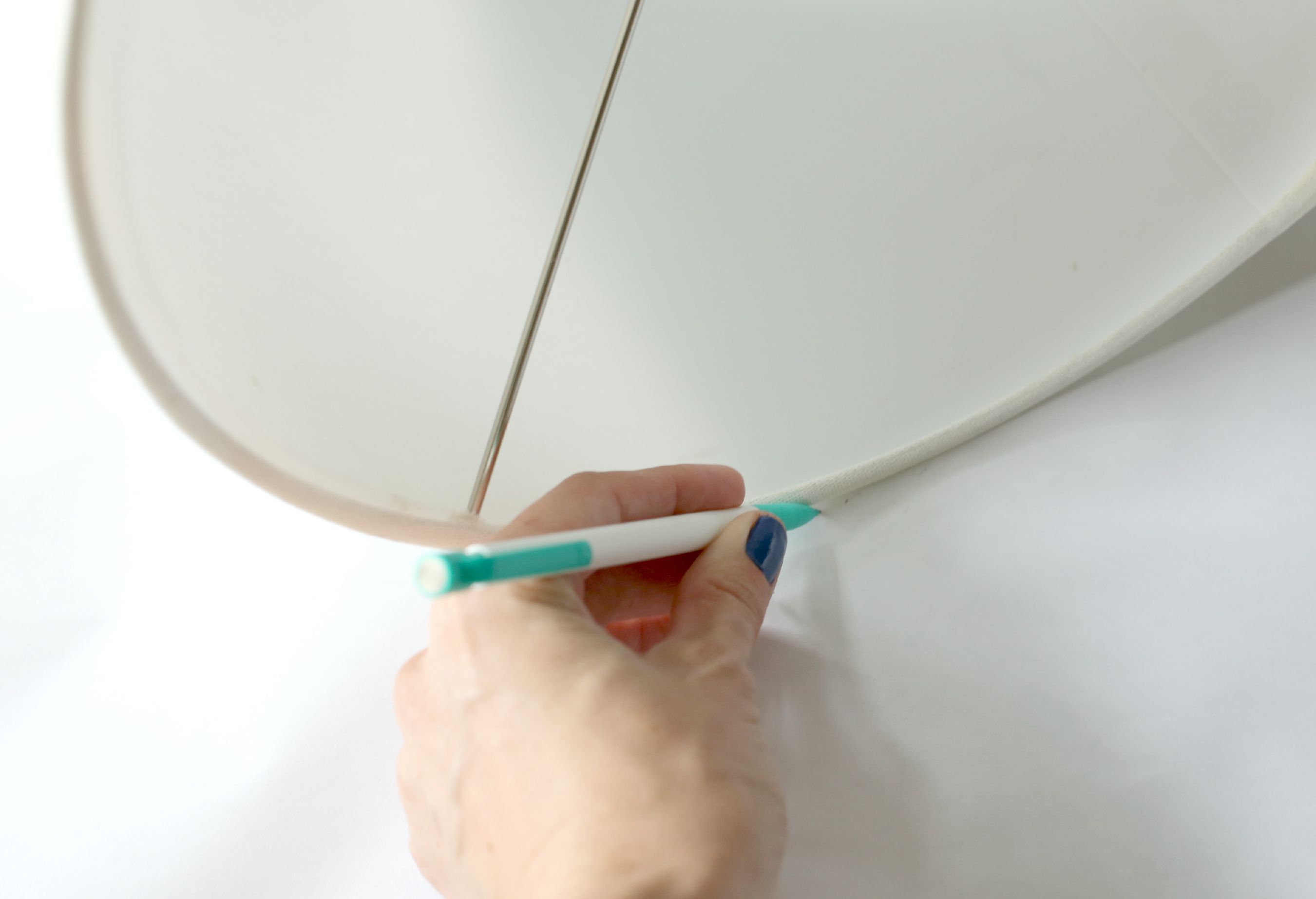 Place your pencil on the bottom of the lampshade, right on the seam (so that you have a starting/stopping point), and roll the shade along the paper, following the edge of it with your pencil to trace its trajectory. When you’re done rolling it all the way back to the seam/starting point, you’ll have a long, gently curving line.

THEN, start back at the beginning pencil point (again on the seam), and do the same thing again, tracing fromTHE TOP of the shade this time.

Confession: this part made me nervous. It all seemed so vague and inexact. Turns out, it doesn’t really matter. My traced shade ended up being much longer than it needed to be, but all I did was trim down the ends because the widths were good enough to work just fine.

Place your traced paper shade on top of your fabric of choice, and then cut out the shape, taking care to leave at least 1/2″ of extra (for folding under). I didn’t measure, just eyeballed. But if you’re a perfectionist, I say measure away! 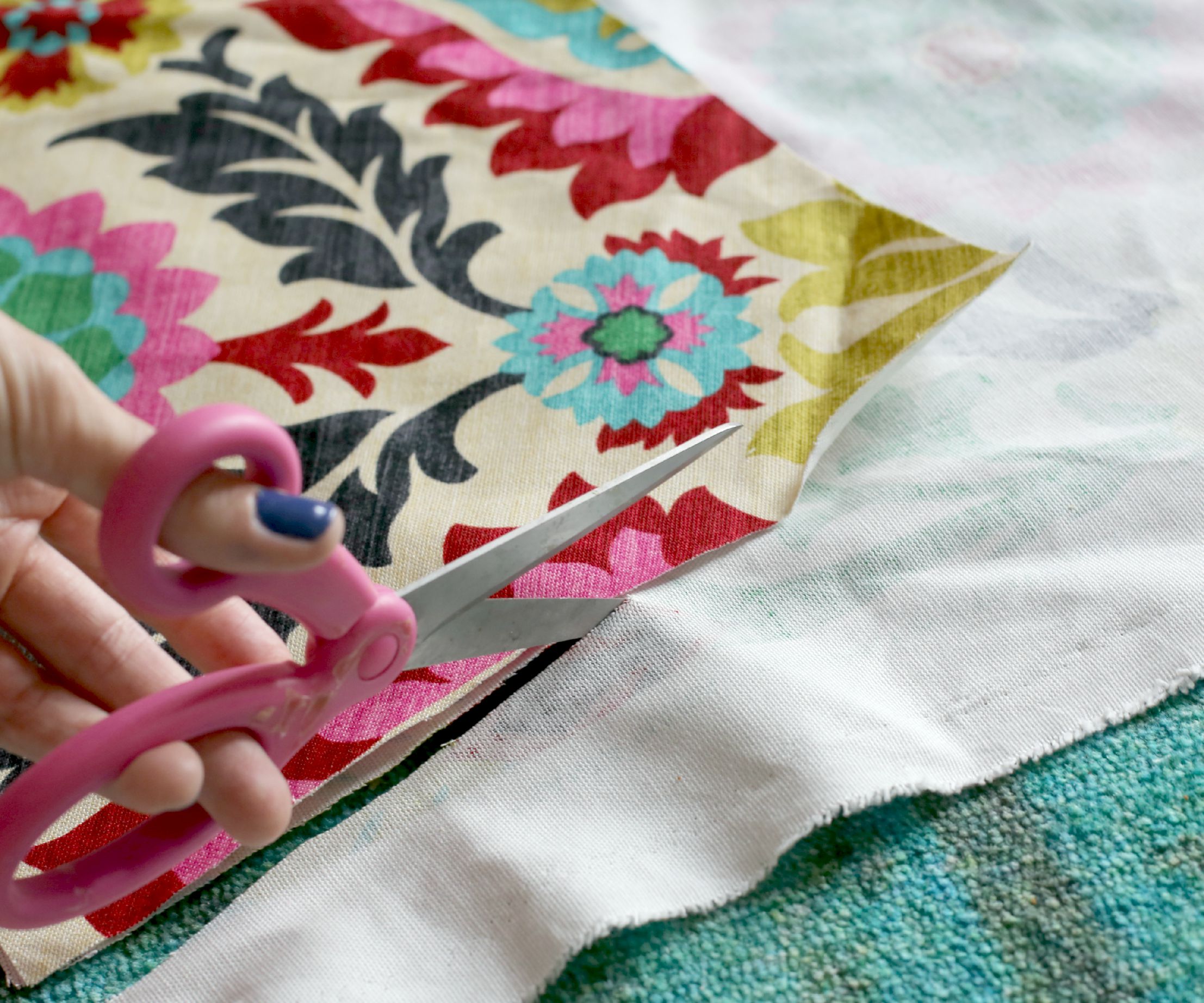 Okay, so this picture is deceptive. Because of my aforementioned dawdling through the first half of this whole shindig, I cut out my tracing paper and my first round of fabric, and then the tracing paper got ruined by a rather impressive water glass snag + dump maneuver on Theo’s part.

So! This picture is of my cutting around my original piece of already measured fabric (hence why I am NOT leaving a 1/2″ border for folding under).

Clear as mud? Feel free to leave exasperated comment/questions full of bared teeth emojis if this is not making sense.

Match your fabric shade cover to the shape of one of your lampshades and, spraying the back of six inch sections of fabric at a time, start to smooth it over the lampshade.

Honestly? I didn’t use very much spray adhesive. Both my shades and my fabric were grippy enough that I only needed it in sparing amounts to make everything stick.

THEE most important thing here is to take your time and carefully stretch and smooth the fabric as you (slowly) go to make sure there are no bubbles or wrinkles.

It takes some adjusting, but it can be done. 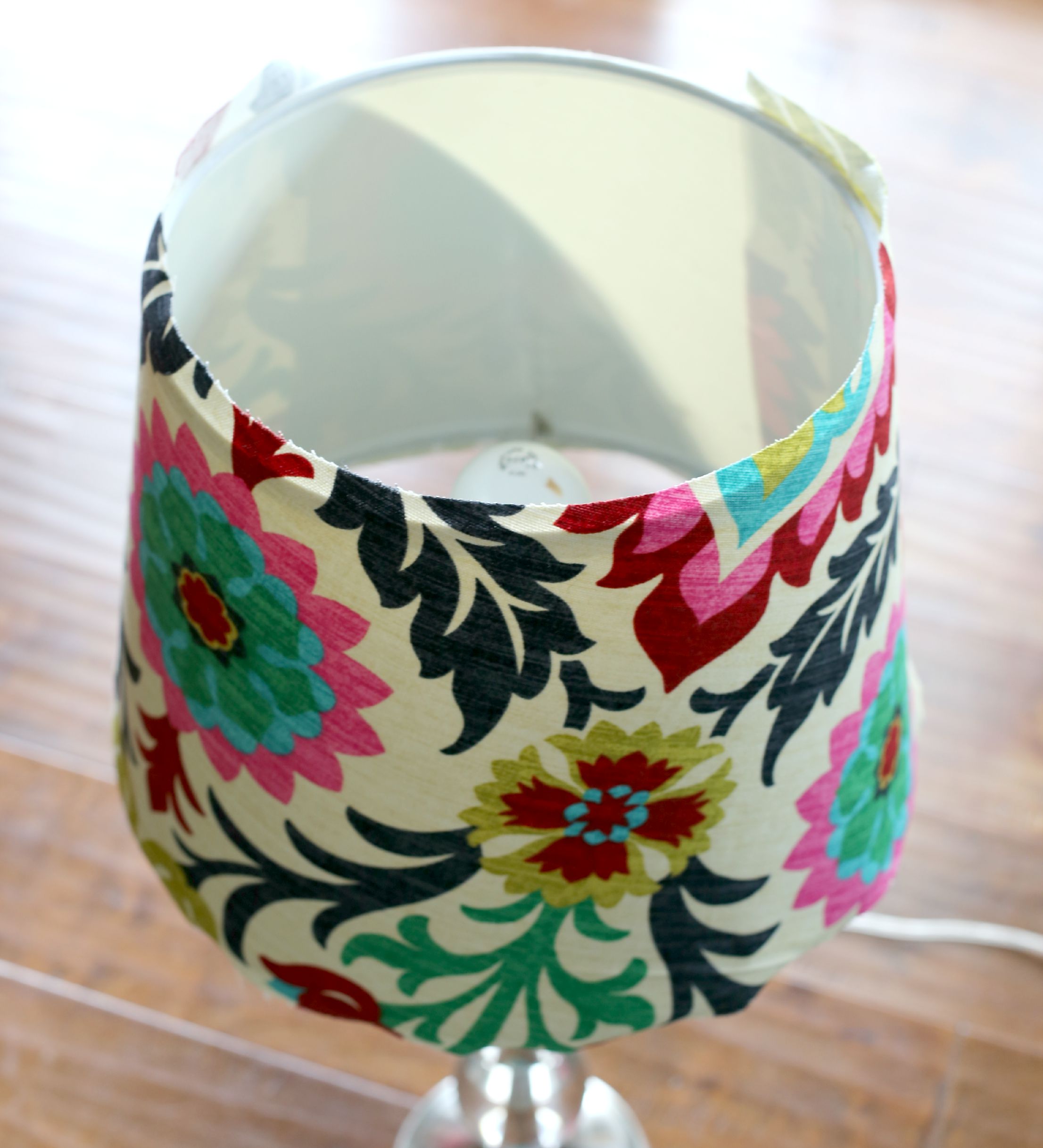 See the 1/2″ border sticking up above the lampshade? That’s what you will fold over the edge to get a nice clean finish.

Working as quickly as possible, run a bead of hot glue in the inside edge of the lampshade borders (top and bottom) in 6″ sections, and then fold down the excess fabric, smooshing/smoothing as you go and making every effort not to fricassee your fingers in the process (not that I would know anything about that). 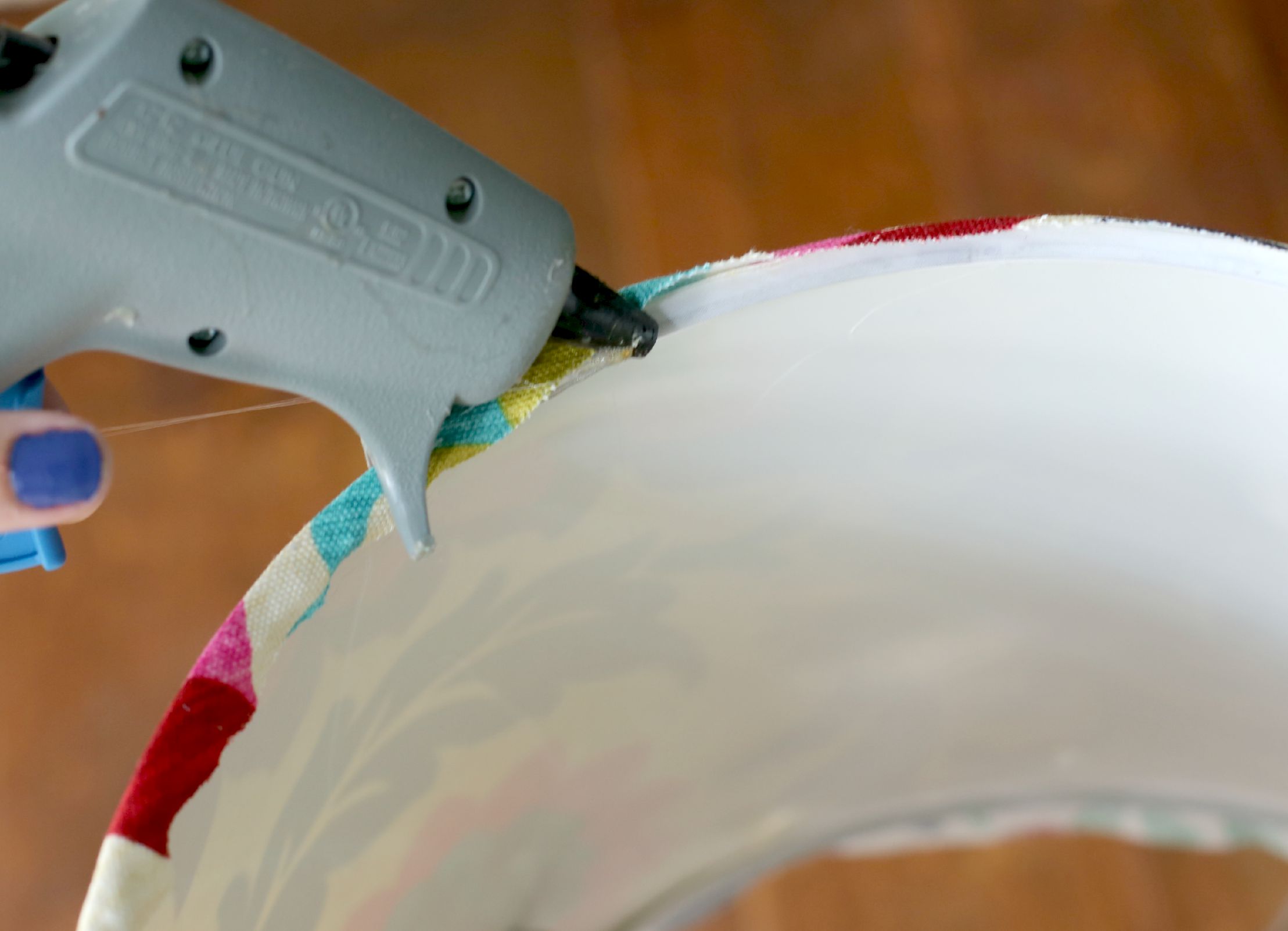 To get a nice clean edge where the two ends of your fabric meet at the back of the lampshade, glue down the first, and then fold under the second before gluing it down on top of the first. 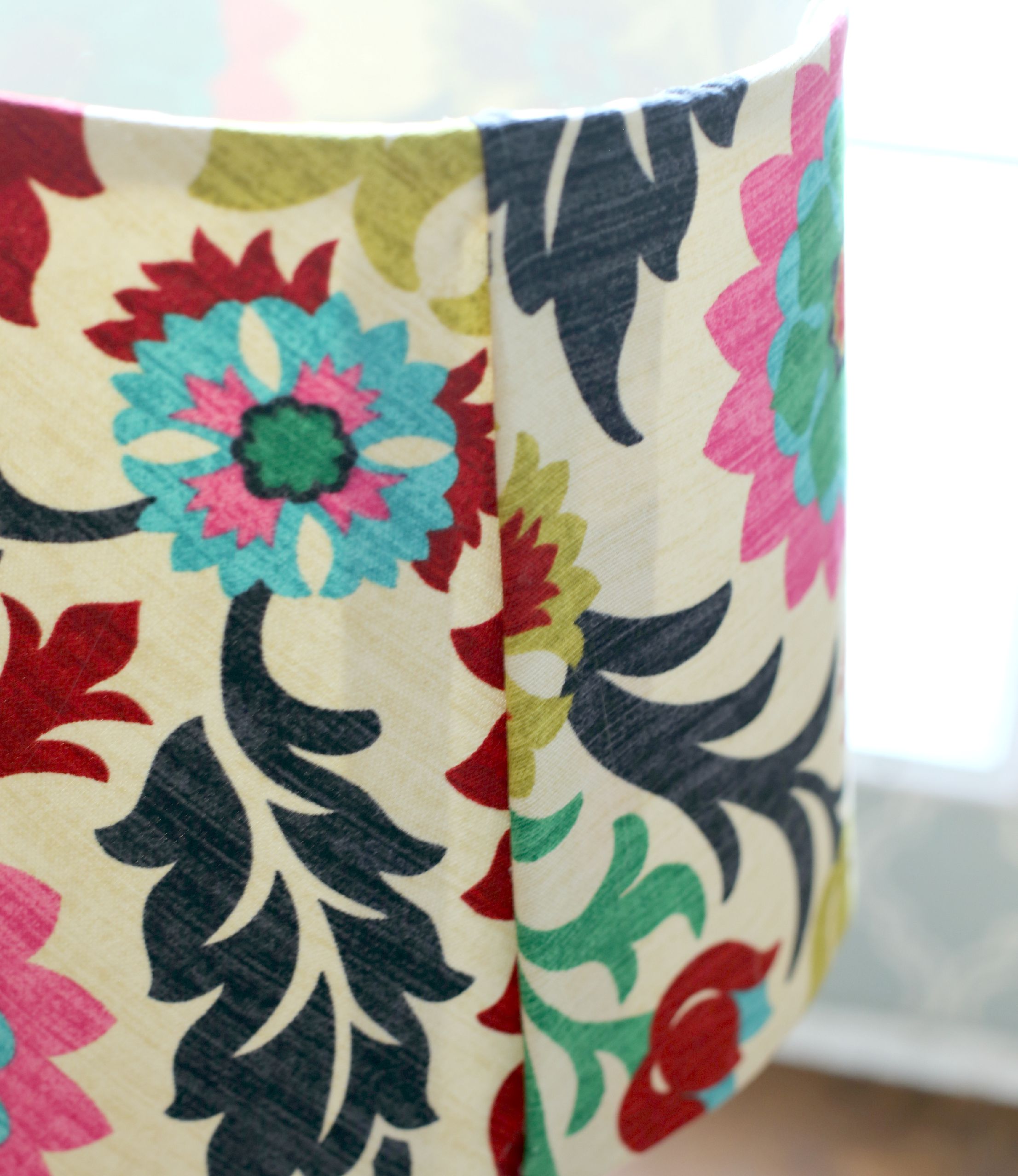 Step back and admire your newly awesome lampshades! 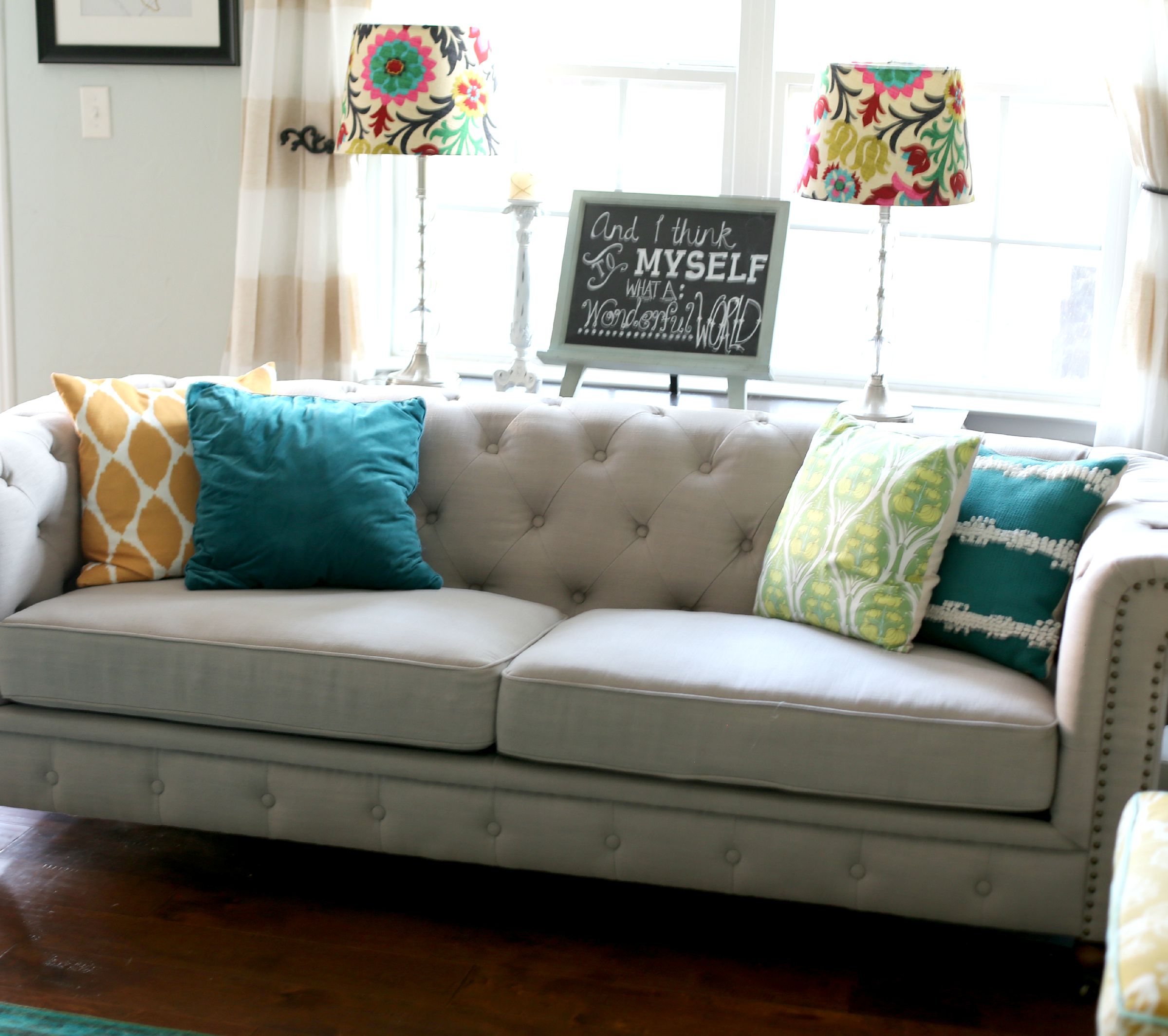 …Upside down pattern and all. Whomp, whomp. (Okay, honestly, it doesn’t bother me too much that the flowers are reaching down rather than up, but I would say that this is a pretty strong argument for why you shouldn’t craft while making lunch for 6). 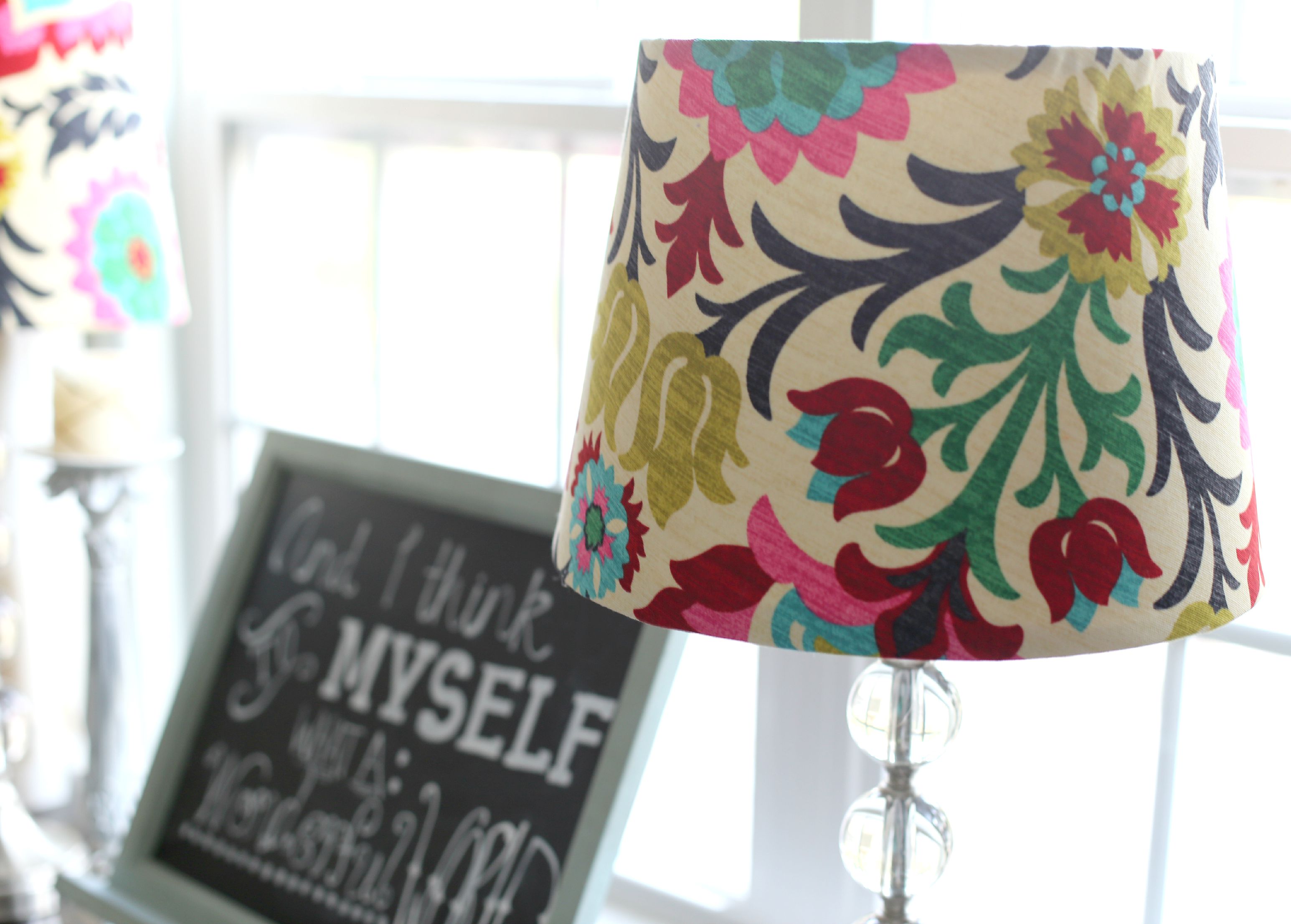 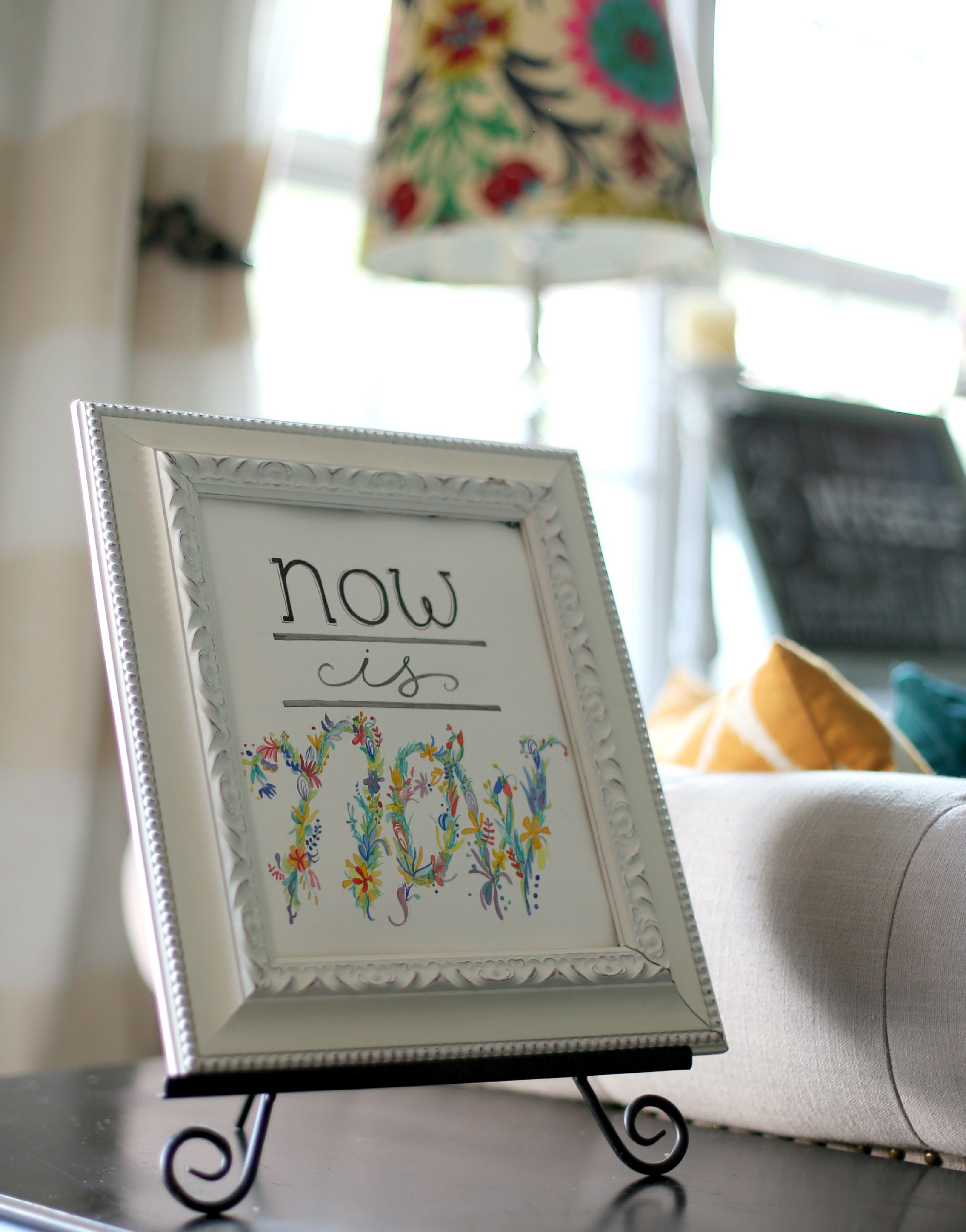 I’ll tell you more about it…including how you can get your hands on it…soon. 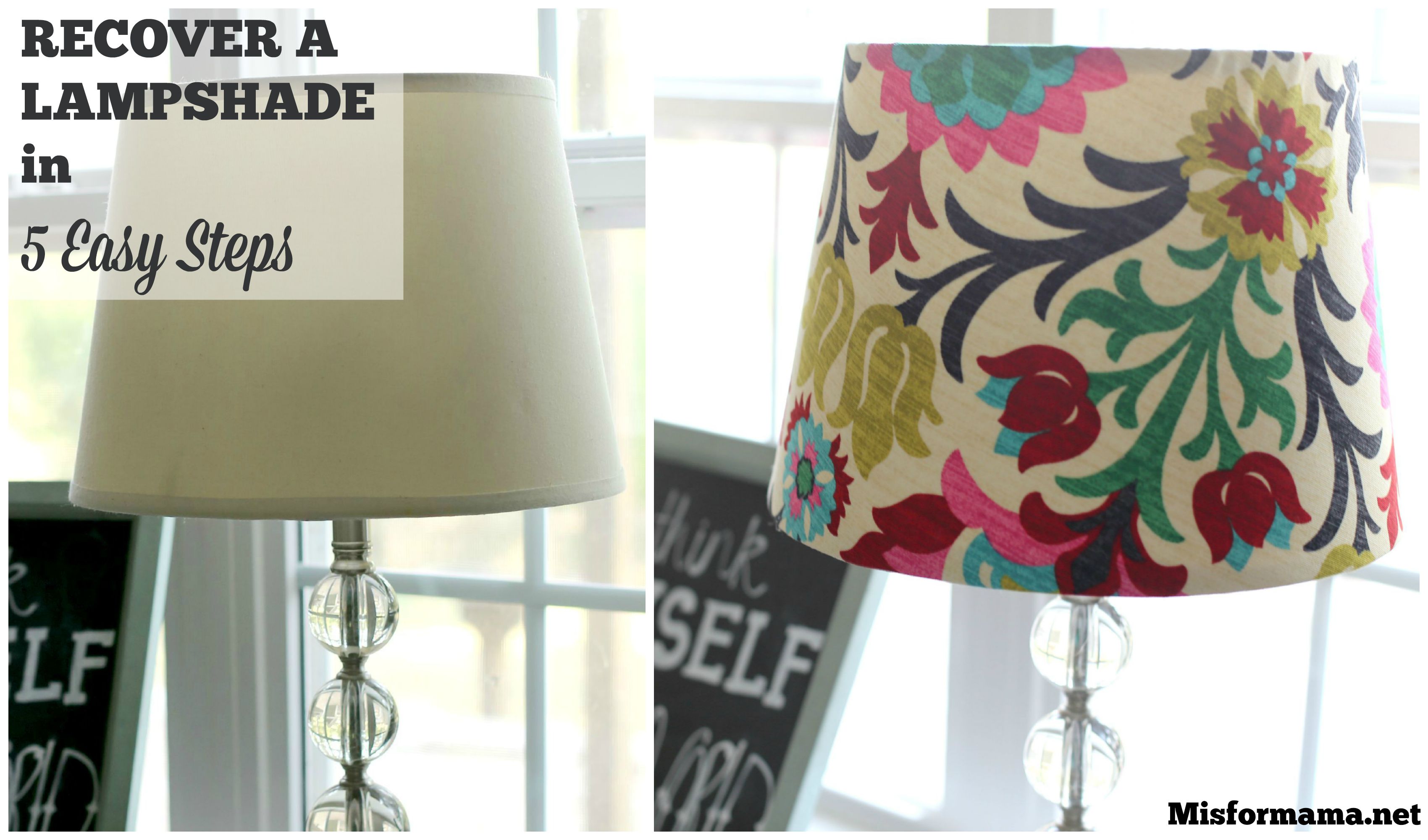 YIPPEE for pretty upside down lampshades!

13 thoughts on “Transforming Lampshades from Blah to Beautiful (AKA: How to Recover a Lampshade)”