I’ve actually lost track of how many times we’ve been asked what we drive. Which, on the surface, probably sounds like a funny thing for people to wonder about. But, when you think about the fact that there are 8 of us who need to travel together at the same time, the question makes a little more sense.

I mean, there just aren’t THAT many options out there that can accommodate 8 bottoms in one ride.

Was it crowded? Yes.

Inconvenient to get into? Mmm hmmm.

Hard to keep clean? You betcha.

Rage-inducing when the big kids weren’t in it, and Mama had to contort herself into circus-worthy positions to  buckle 3 car seats? Amen and bless it.

But it was also paid for free and clear. It ran great. And–honestly–every single one of those “issues” I mentioned is a #firstworldproblem.

Do you know what is a completely legitimate problem? Having MORE bottoms than will actually fit inside a vehicle. Because, since we live in a first world country and stowing your children on the luggage rack is highly frowned upon (as opposed to, say, Central America where you might just see an entire FAMILY hanging off every surface of a motorcycle as they buzz through town), having MORE bottoms than will fit in seats just won’t work.

So, are we expecting more bottoms? Nope. At least not right now. But we also are open to the prospect of more kids in God’s timing, so we’ve been–shall we say–keeping an eye open for something a teeny bit bigger.

But the thing is that there really isn’t much in the “teeny bit bigger than a minivan” category. There are a couple of nine passenger options and then–BOOM!– you’re up to (gasp!) 15 in no time flat. Which is why we’d been eyeing the Nissan NV 3500 passenger van for a while (it’s a 12-seater). And by “a while,” I mean for the past 18 months or so.

But they’re hard to find used, y’all, and we’re not into paying full price at the car dealership. Each time a deal would pop up on Craigslist, we’d check it out and discover that either a) it really wasn’t that great of a deal or b) it was a moot point because it had already been snapped up.

Which…is what I figured had happened for sure when I stumbled upon a listing for a navy blue 2014 NV 3500 south of Waco, Texas with only 10,000 miles on it and all of the fancy bells and whistles for a really great price. It’s gone, for sure, I told myself. You probably shouldn’t even bother. But bother I did. And, as it turned out, it was still available–even after being on the market for over 2 weeks (which is kind of unheard of because these suckers go fast, y’all).

Honestly, I still have no idea why it didn’t sell…except maybe because she had accidentally left off the last digit of her phone number on the ad and had not yet relisted it? Or the Lord was having mercy on my poor bent-back-by-awkward-belt-buckling fingernails? (I kid). 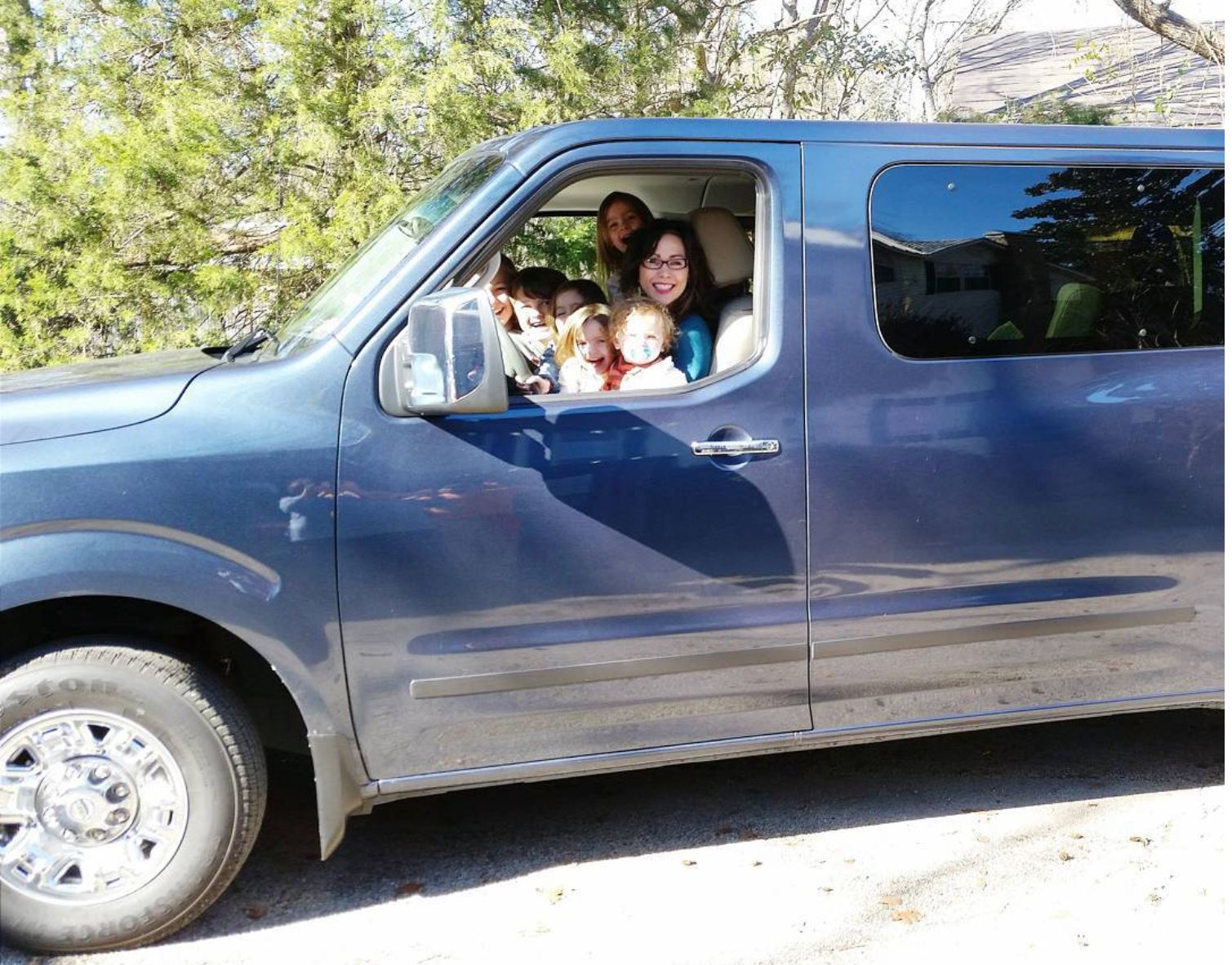 {We kept the van a secret until we drove up in my parents’ driveway with it; this is moments after the kids saw it for the first time}

I don’t know. But I do know this: we talked the lady down almost another $1,000, and then we drove down to check her out/bring her home (the van, not the lady). It was a 6ish hour round trip, but my mama was kind enough to keep all of our kids, so it felt more like a date than anything–especially when we managed to slip into Fixer Upper’s Magnolia Market in Waco for a few (read: 13) minutes before it closed.

So, how do I feel about driving a bus, er, large van? 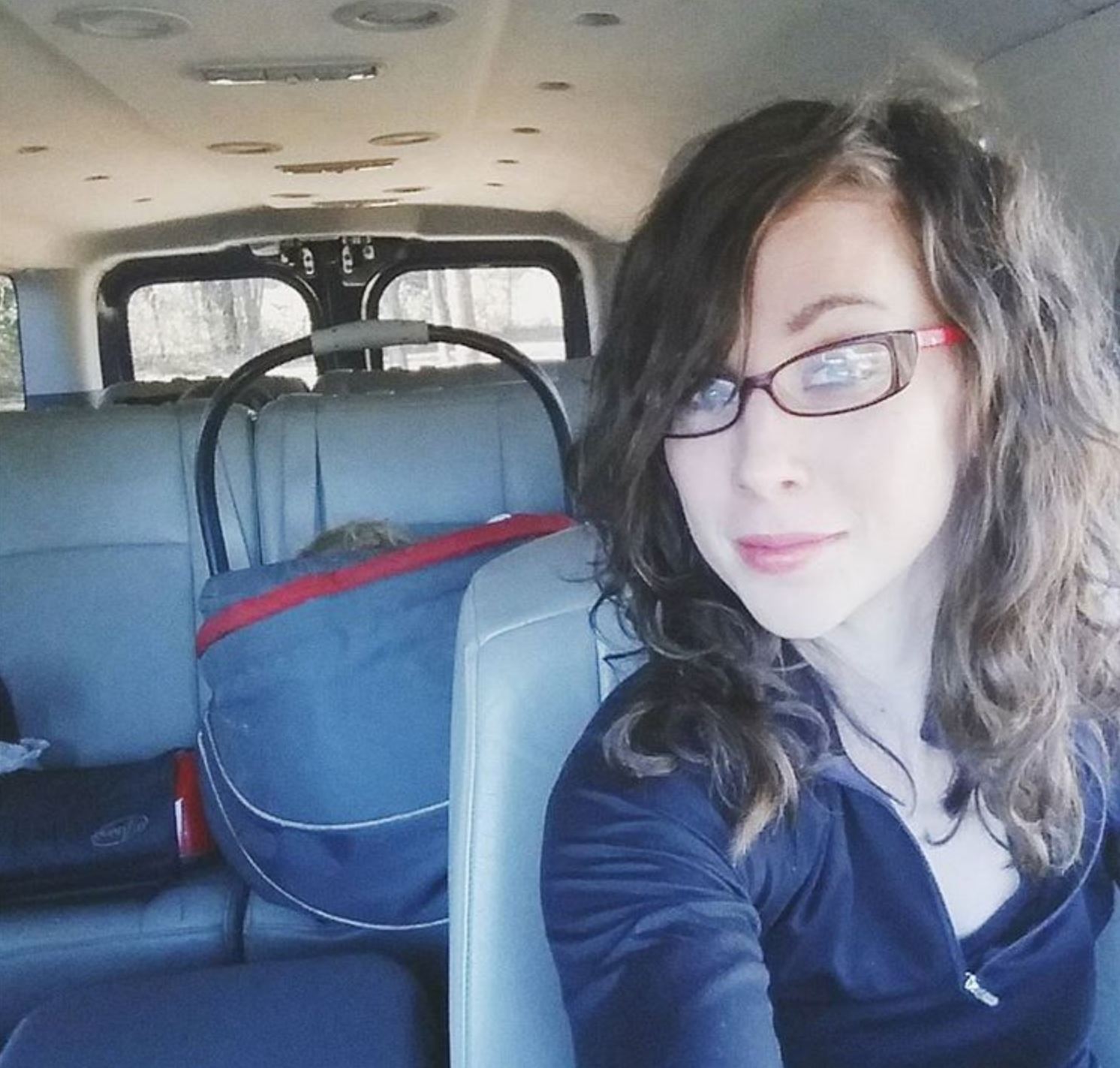 I kind of love it. Seriously. It’s all kinds of awesome.

We took out the back row of seats to have extra room for groceries or other things we might need to haul (I’ve already picked up 6 chairs + a dresser, so it’s a bit of a dangerous ability to have), which means that there are still only 8 seats available. But the amount of room/access is markedly more generous. It’s just so much easier to get to everything/one, even if you do feel a bit like you’re mounting a horse every time you clamber inside.

Do you want to know my ABSOLUTE favorite part about it, though? (I think we all know I’m going to tell you, whether you do or not).

It’s SOOOOOOOOOO much easier to keep clean. I hoped it would be, and I was totally right. We eat in our cars. We kind of have to. Living in the country, we drive at least an hour round-trip almost every single day, and we wouldn’t survive in as much peace and harmony as we do without in-car snacking. 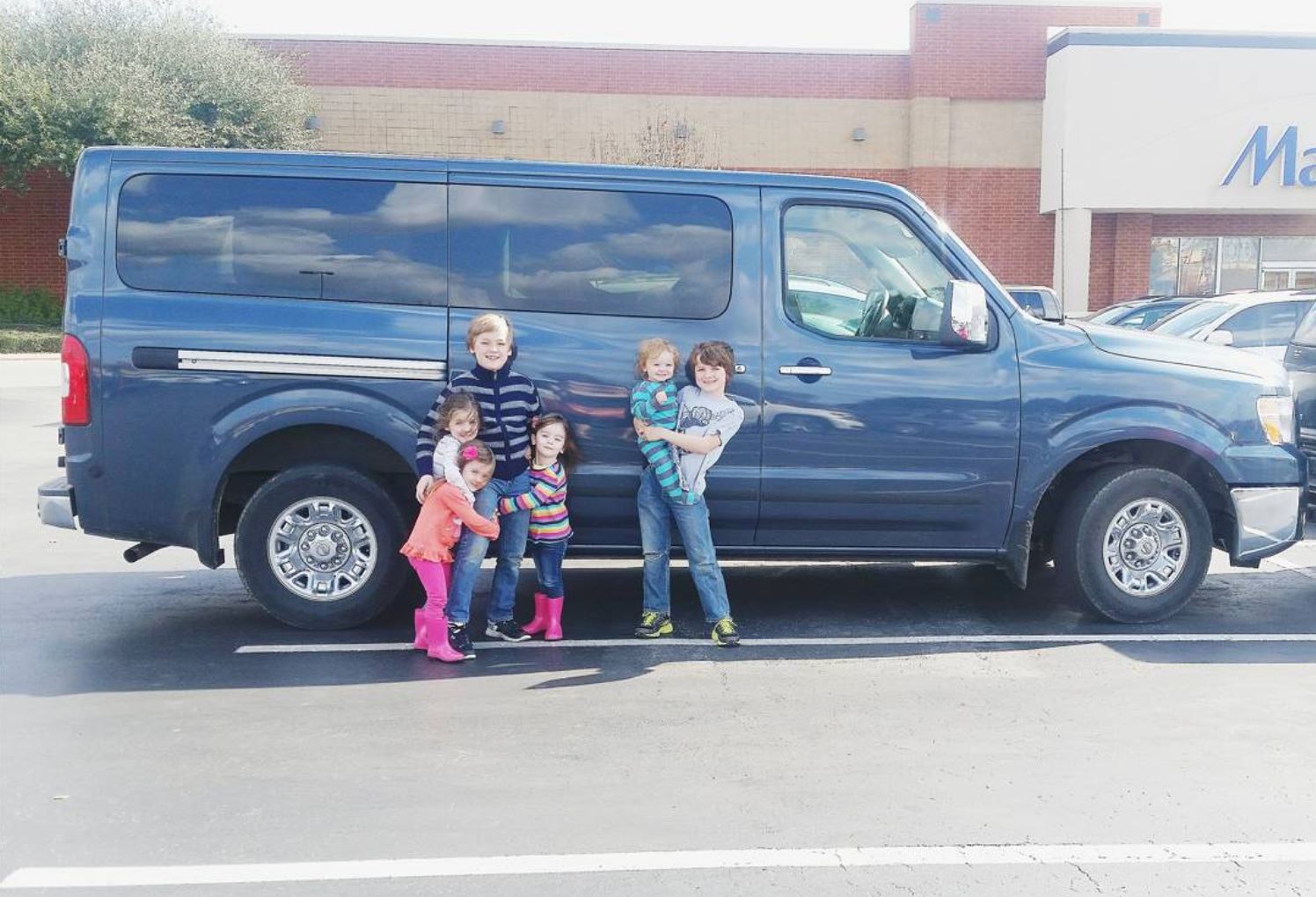 But in the Odyssey, it was just too easy for something to get dropped, roll up under a seat, and then never get seen again (cueing multiple episodes of: “Um, what’s that smell?” Yeah, I know. GROSS). Especially with the need for at least one of the twins to be in the back row for all of our car seats to fit. (Why very small children have such a propensity for spilling/dropping/throwing food is a mystery to me, but I love it…clearly).

ANYhoo, because of the new seat configuration in Nina Cleana (Shaun suggested the second name as a motivation for keeping her “cleana” that the Odyssey) and the amount of space BENEATH the seats, I’m happy to report that we have been driving Nina for over two weeks, and she is still as spick and span as the day we bought her (well, except for the mud that we inevitably track inside because country living).

So, yeah. Pretty thrilled about that.

Not quite as thrilled with the gas mileage. I knew we were going to take a hit (we averaged 21 in our Odyssey). But, at an average of 15 mpg, it’s downright scary how many times I’ve had to fill up since we’ve gotten her. It’s not too bad with gas as affordable as it currently is, but I cringe to think of when it (inevitably) jumps back up to $4/gallon.

Oh! And, as you can imagine, I’m not the only one who thinks that driving an ark on wheels is just the coolest thing ever. (It really does have remarkably smooth handling and braking, though). 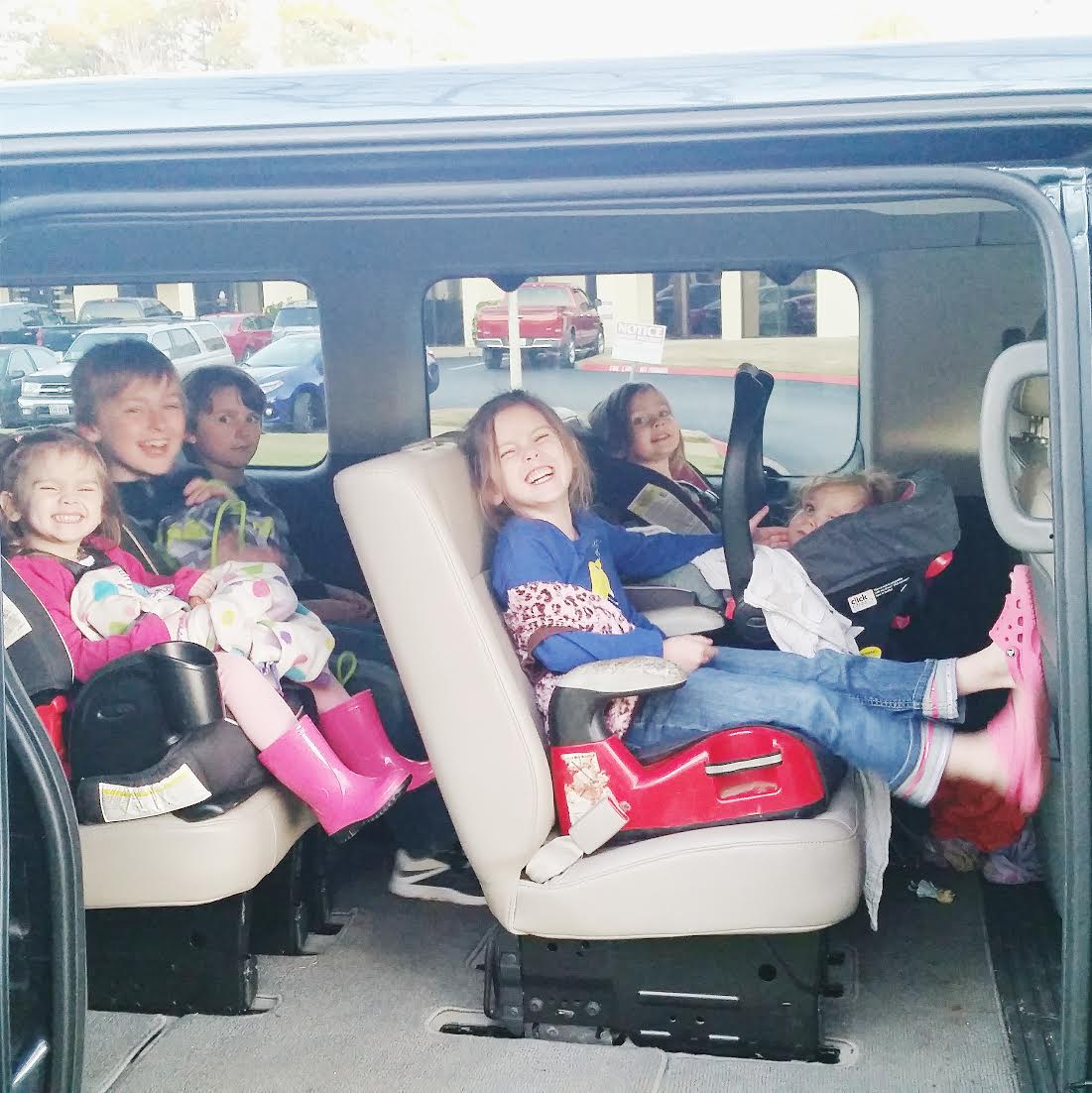 They love the extra space, the feeling of being higher than everybody else on the road, the awesome sound system (seriously, it’s pretty decent), the fact that we have zero trouble finding our car in parking lots, and the fact that I let them pile into the (seatless) back for dance parties if we ever need to hang out in the car and wait for a bit.

They don’t even mind the loss of the DVD player that we employed on a semi-regular basis in the Odyssey to kill car naps and distract over-tired toddlers. And the funniest thing? Apparently, there is something irresistibly drowsy-making about that big purring van because, almost inevitably, when we come home from the gym in the evenings, all 6 of my children will have fallen asleep.

I haven’t decided whether this is a good or bad thing yet, but it wouldn’t matter if I had because it’s pretty much a done deal if it’s dark outside.

So, there you have it! A new answer to the frequent, “So, what do y’all drive?” question and one that will not change for a goooooood long while. If you see a blue NV 3500 around town, give me a wave and a slow, conspiratorial wink. Then, I’ll know you’ve read my post. Either that, or it’s someone hitting on a mother of 6 in a giant van.

And that would just be weird.