I have no excuse for my extraordinarily, ahem, punny title other than…Monday?

Sure. We’ll go with that.

Anyhoo, I think I’ve talked about this before (but six children is slowly but surely turning my brain into sludge so…) here’s the deal:

I love DIY. I will happily DIY practically anything that I think I can pull off instead of paying lots of money for an already done deal.

I know there’s this magical thing called Youtube, which could certainly give me more than enough information to fake it through a few little boy haircuts and a bob or two.

But…I just haven’t been able to make myself pull the trigger on that one.

Partly because I feel like I am missing the hair-cutting gene. I have the hair-styling gene for sure. I’ve always been able to braid/elaborately style my own hair without having to look in a mirror, and I’ve even been recruited to do styles for special occasions for others a time or two.

But put a pair of scissors in my hand, and I’m all thumbs and elbows and overflowing potential for one of the worst chili-bowl cuts since 1994.

If I were forced at gun-point to open a hair salon (because that’s what it would take), I would probably name it, “Weedwhackers R Us,” just so everybody would know what they were getting going in.

Which brings me to my wonderful friend, Hollie (who would be a good egg in my book just for being a fellow “ie” name-speller but who also happens to be the best hair-stylist I’ve ever been to, so that’s a nice bonus).

I’ve been going to Hollie for…I’ve lost track. But something like 5 years? I think? (I really have lost track). And besides that one time that she accidentally grabbed the cutting shears instead of the thinning shears and lopped an impressive chunk off the back of my hair (yes, we laugh about it now; no, we weren’t laughing at the time), she’s never steered me wrong. (And let’s face it: I have enough hair for three people, so that one chunk was practically enough for Locks of Love, and I didn’t even miss it that much…once I learned to hide it when I styled my hair. :/).

Add to that the fact that she lets all of my kids cram into her studio to do cuts assembly style, and I couldn’t imagine a better friend/stylist.

That assembly-style situation is exactly what we had going on a few weeks ago when every single last one of my kids (minus Della, since she’d already had her birthday cut) got a trim (or more) on the same morning.

I would love to say that I was the least bit emotional about the twins’ first haircut because that would make me sound like a better mama (I guess), but I wasn’t. I was ready. Della didn’t get a haircut until her 5th birthday, but her hair has natural curl and never looked scraggly or weedy.

I could not say the same for the twins. 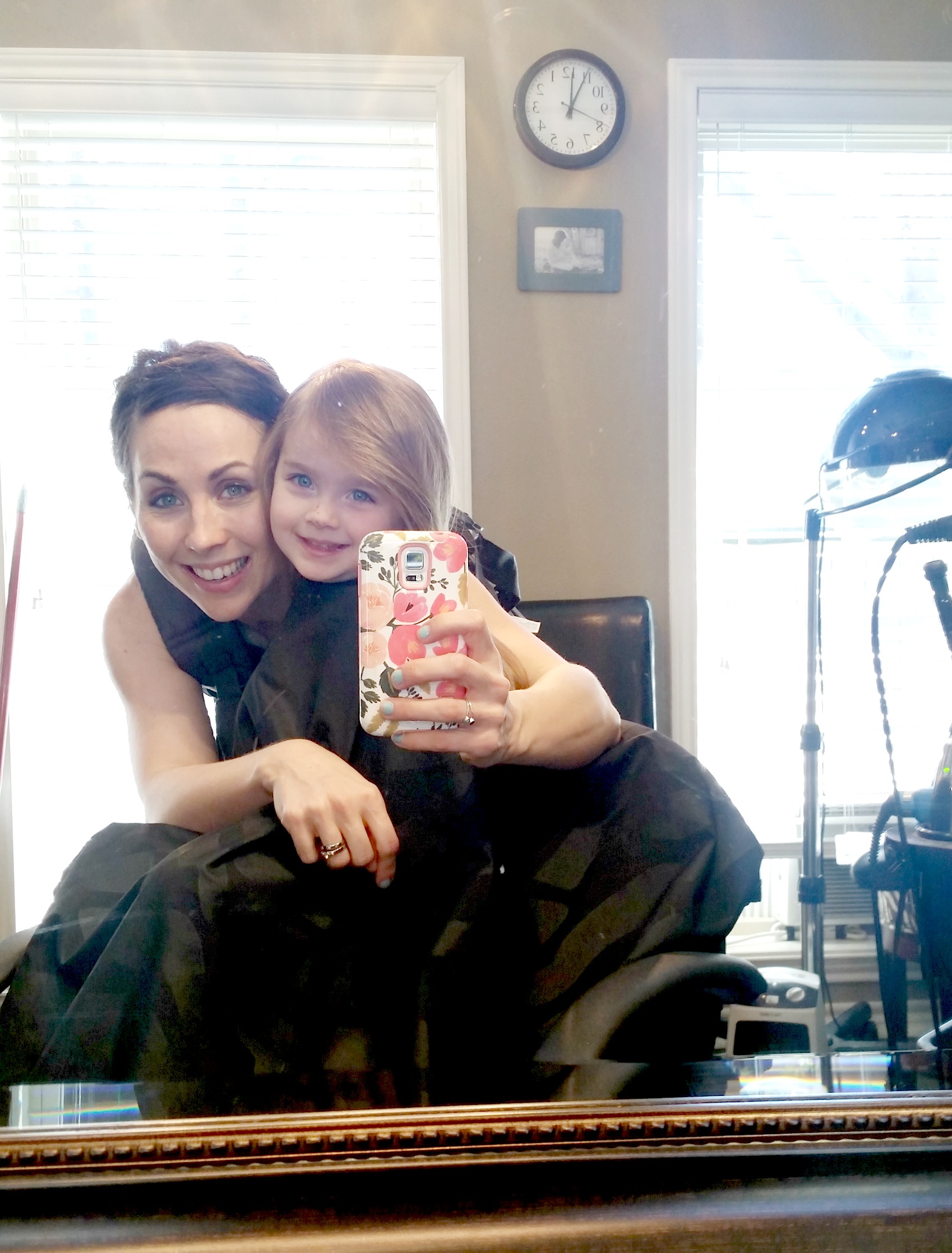 {Getting ready for her big chop} 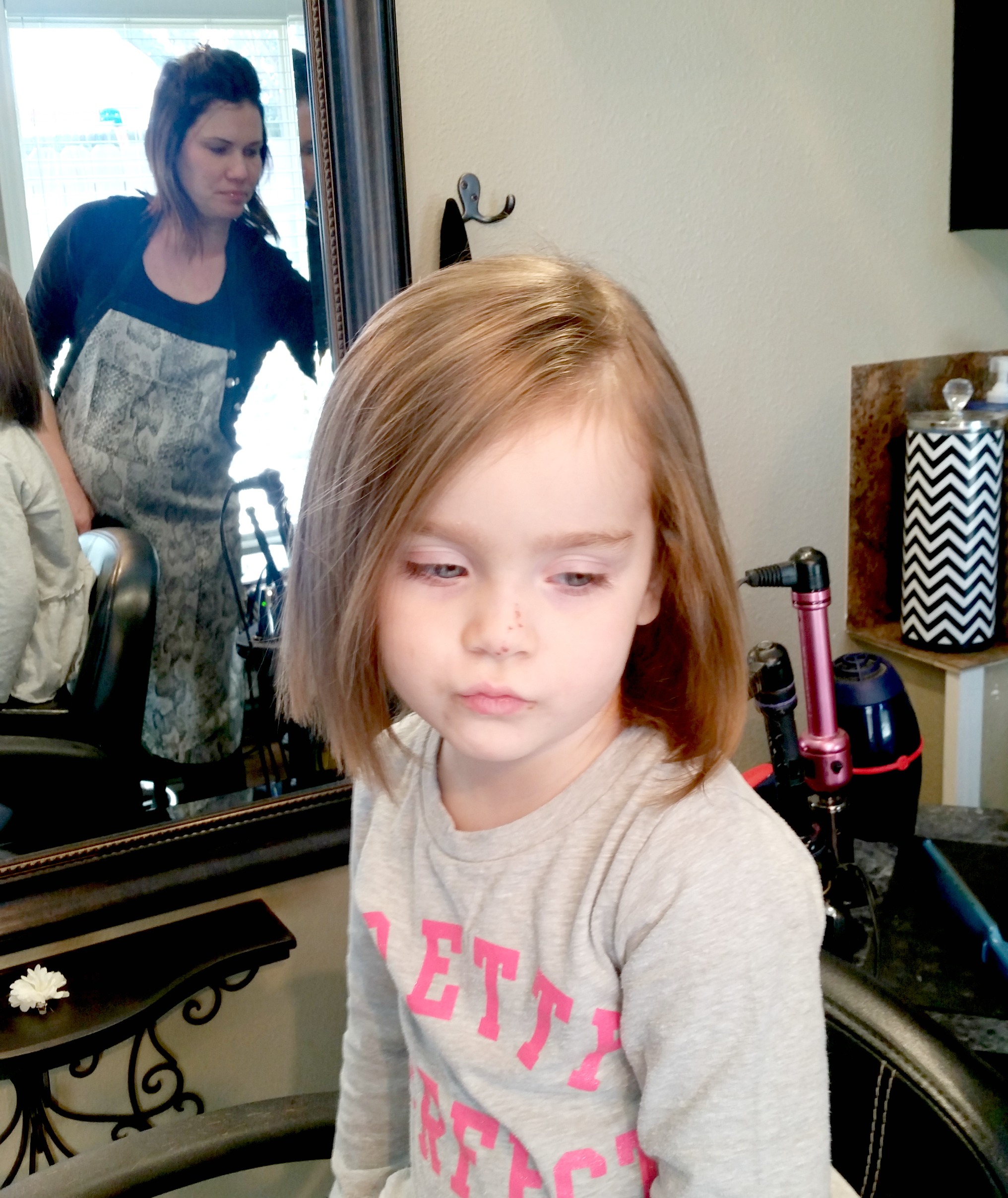 {Duck lips and downcast eyes; oh no! Already her bob has aged her to teenagedom!} 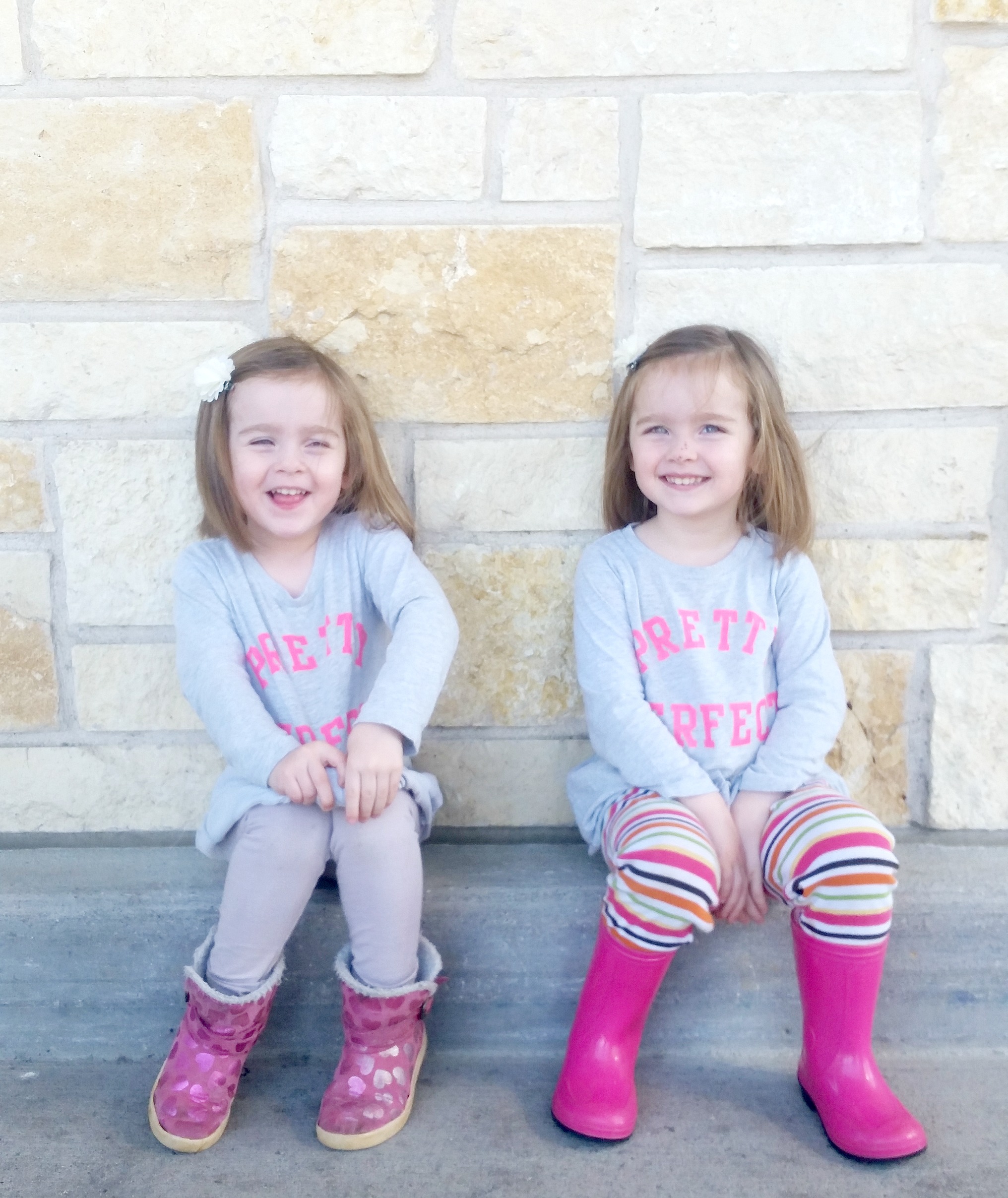 {Oh, phew! Back to being little girls!}

And the boys only get about 2 haircuts a year and were looking more than a little Hobbitish.

Even little mister’s Theodorable curls were starting to frizz and hang down in his eyes. 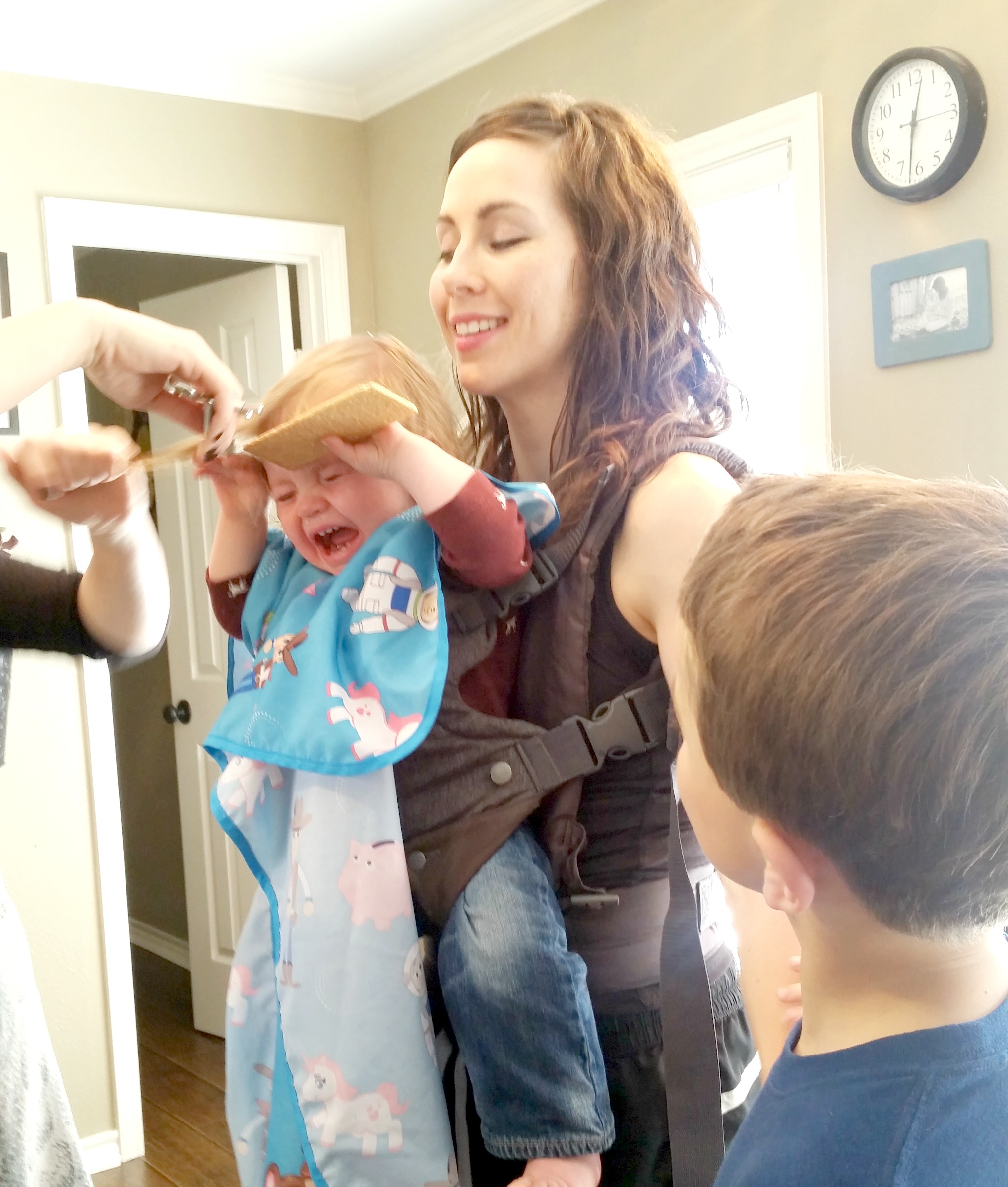 Clearly, he was a huge fan of the process.

I would also love to say that I lined all the kids up and took a group photo of all the freshly shorn sheepies. But…I didn’t. #momfail #bloggerfail #seenoteaboveaboutsludgeforbrain

I give, as my excuse, the fact that all 7 of us headed to the grocery store to buy Shaun’s birthday dinner ingredients immediately following an hour and 1/2 of haircuts, and keeping 6 children a) alive b) happy and c) out from underfoot of fellow shoppers WHILE remembering all the things on your list kind of drives the thought of group pics straight out of your head.

This was not taken on Haircut Day, nor does it showcase any of their haircuts in any sort of clear way.

But it IS a group pic (and rather compelling evidence that my husband is a hoss). So, there’s that. 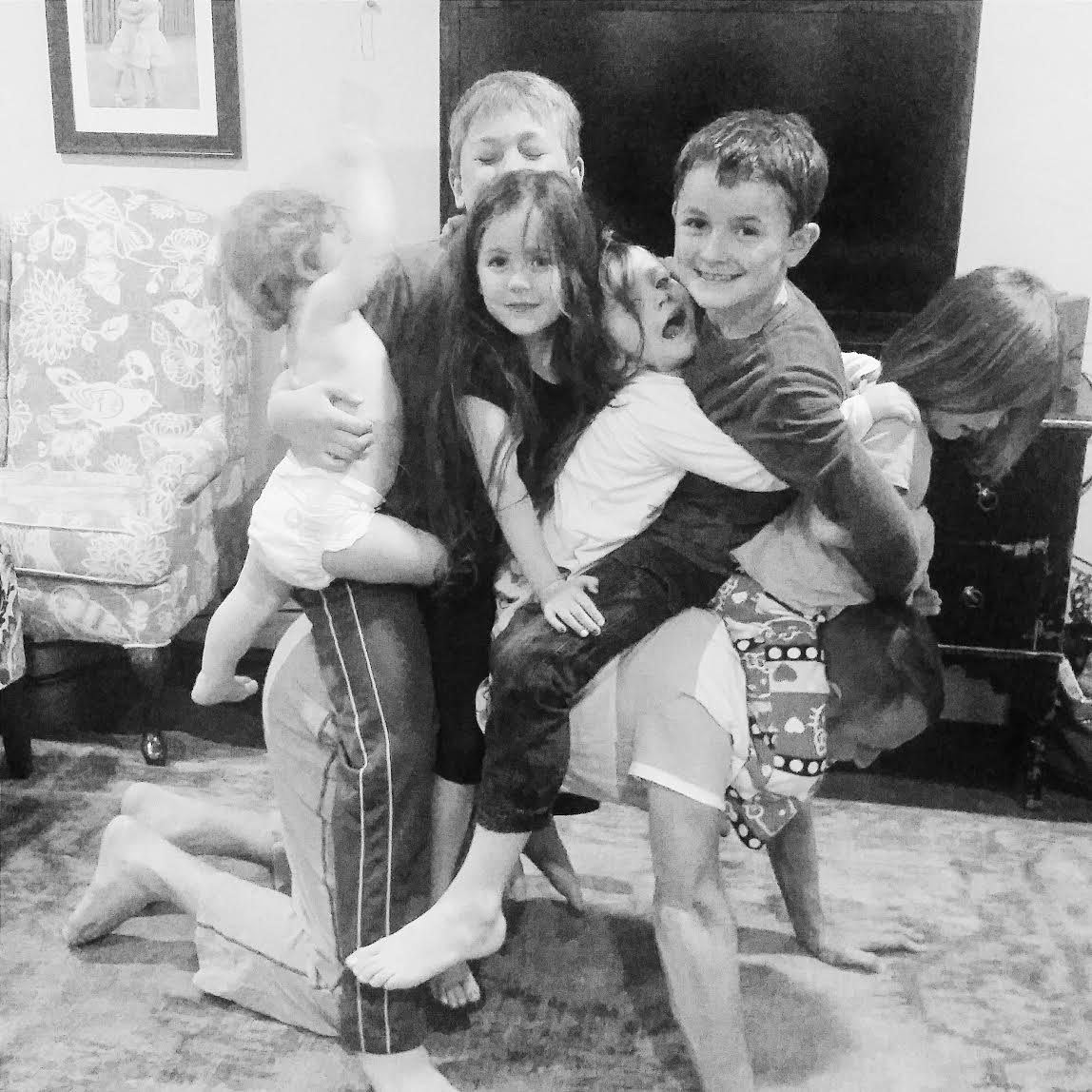 Do you guys cut your own kids’ hair? (Go ahead, make me feel like a fraud as a mother; I can take it).