Shaun has been working most weekends for a while now, and this last one was no exception, so Valentine’s Day was pretty low key. Which was totally fine. We love a good excuse to cook a nice meal together and spoil each other a bit, but we also know that it’s not that meaningful as holidays go.

The night before, though, we stayed up late making my favorite dessert of all time for a special breakfast in the morning for the whole family. 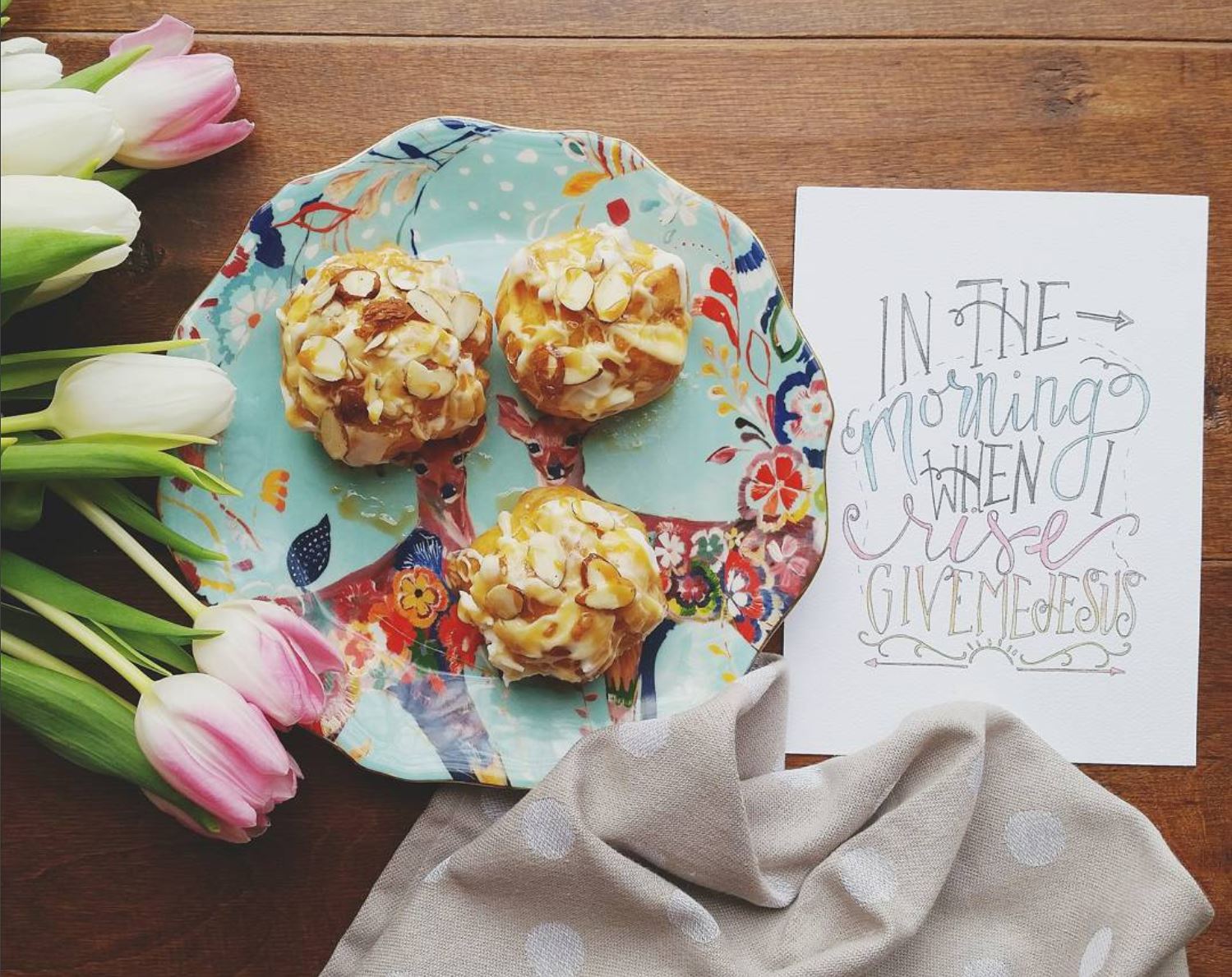 And they were worth every calorie-laden bite.

To make up for hardly seeing each other on Valentine’s (and, perhaps, more importantly, a Sunday), we finagled a date on Monday night instead. But, at the last minute, our babysitter fell through, and I couldn’t find a replacement.

Oh well, I thought. Dinner at home with the family is good too.

But I couldn’t get the thought of a night “on the town” with my man out of my head, so I called my ridiculously nice mama, and, sure enough, she and my dad agreed to come over and watch the kids at our house so we could head out to have some good food, see one of the worst movies I’ve experienced in a while (Hail, Caesar…yuck), and enjoy some local frozen custard.

But mostly, we were just thrilled to have a chance to finish our sentences and hold hands and hang out in a COMPLETELY abandoned movie theater (apparently, everybody but us got the “terrible movie” memo).

Also, I jumped on the chance to get dressed up like a toddler pounces on her twin sister’s neglected Barbie (not that I have any experience with that). 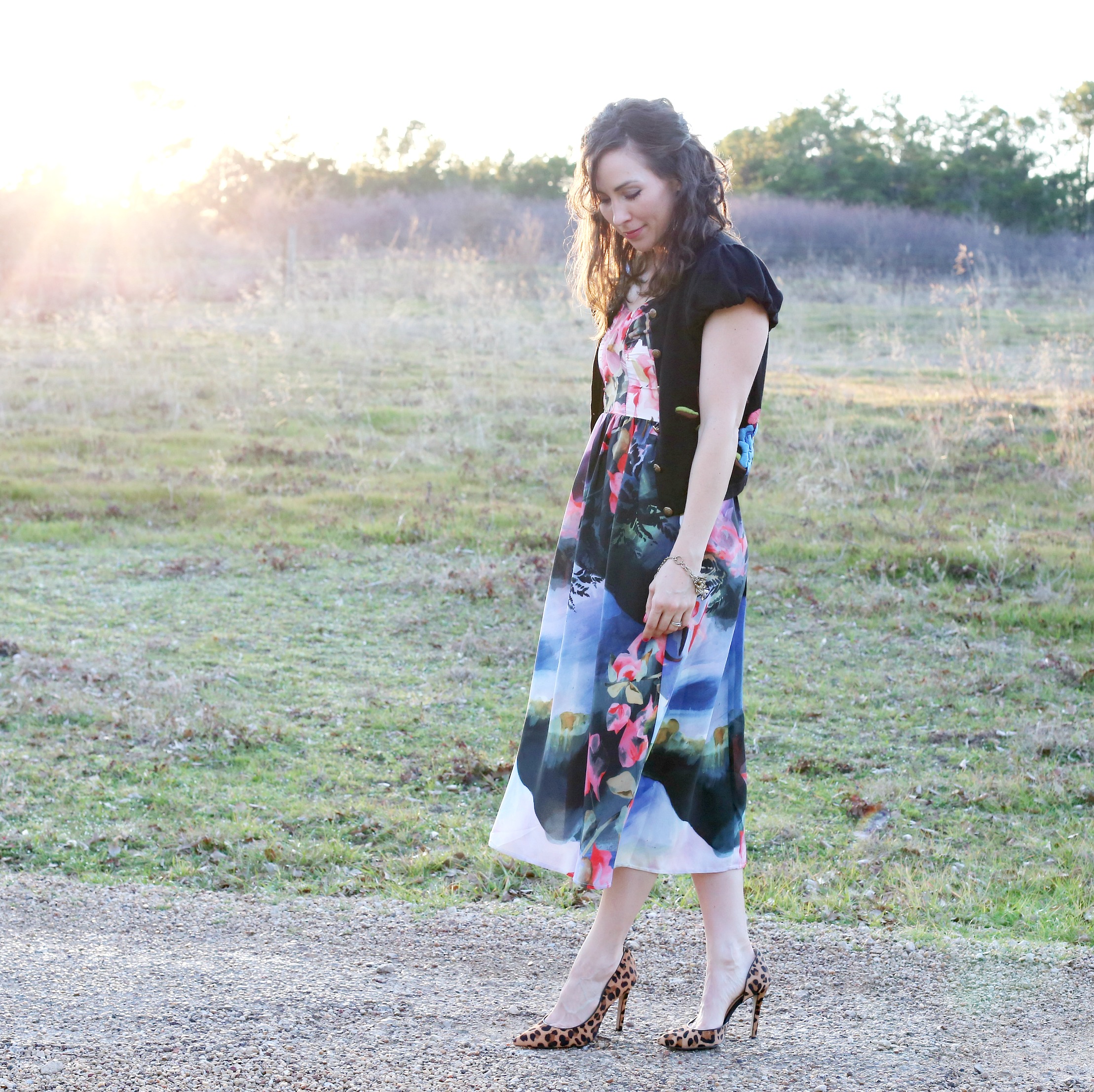 I found that psychedelic dress on a birthday trip to Anthro last October and developed an immediate crush, but, even at 50% off, it was still $98, and I just couldn’t swallow that one. But then, a few weeks later, we were back in Dallas for my my sweet niece’s first birthday, and I managed to squeak in the door of an Anthro about 15 minutes before it closed. And–lo and behold–they had the very same dress in my size for…$35. (It would have been even less but they wouldn’t let me stack my birthday discount on top of the sale they were running. Hmmph!). 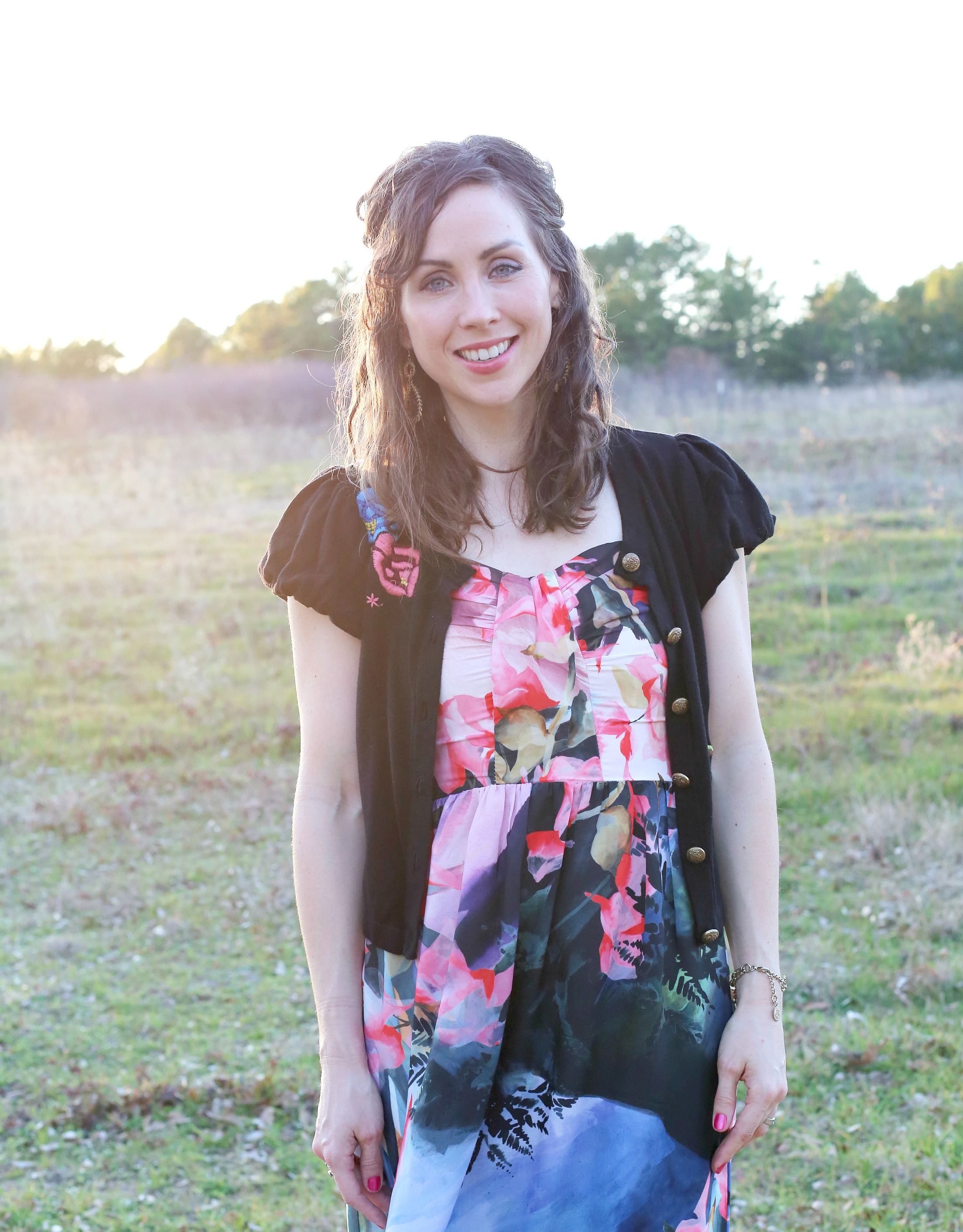 So, I bought it, brought it home, and hung it in my closet, where it has dangled in neglect for the last 4ish months. Our date was super casual, but I decided that dress was getting worn, darn it, regardless of how many raised eyebrows I got. (I got a few). 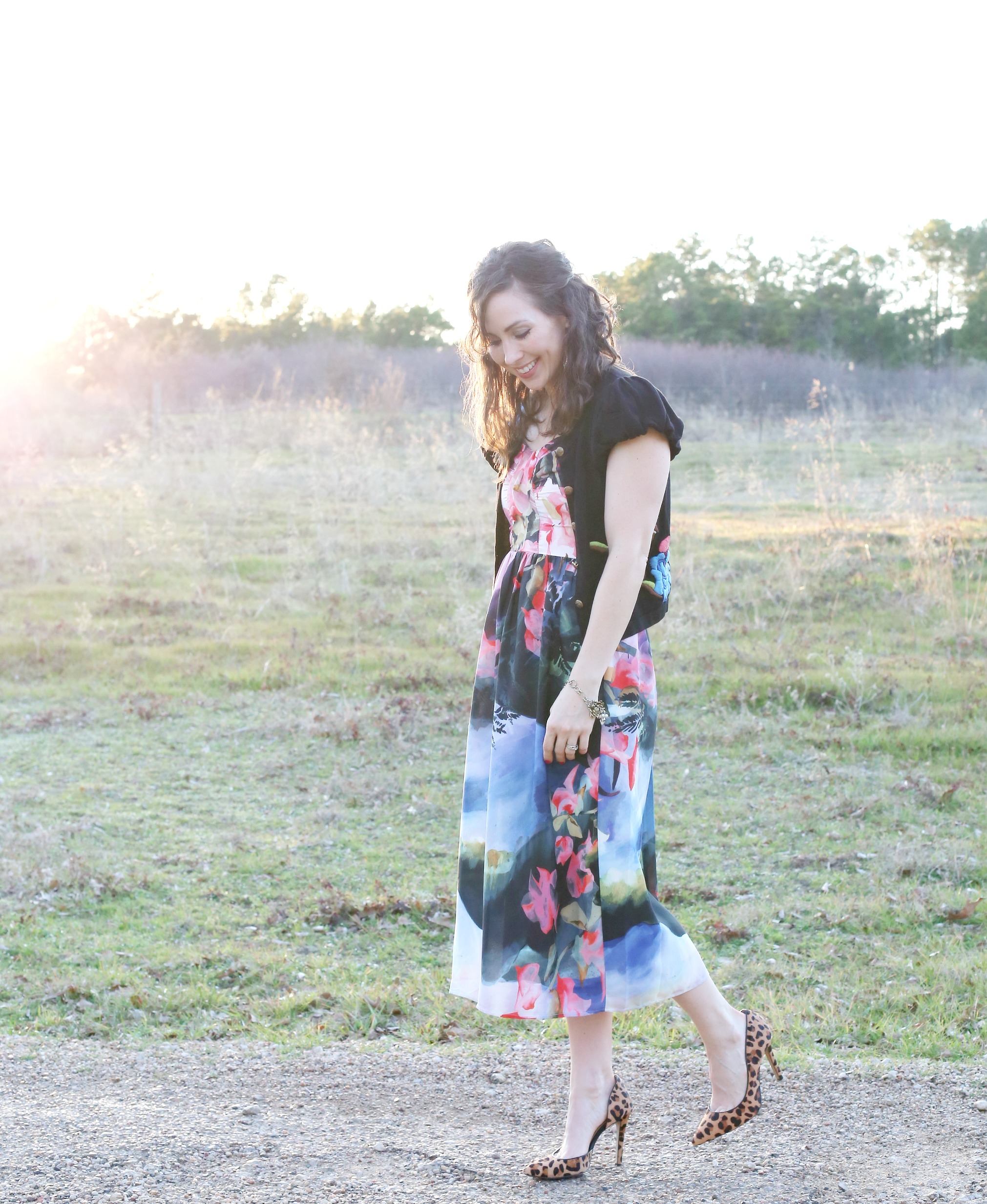 I paired it with a thrifted $3 sweater (also from Anthro, originally) and some leopard print heels that I scored at Nordstrom Rack last summer in Colorado and love in theory but feel more than a little sketchy about in actual practice (my 33-year-old feet aren’t nearly as enamored with heels as my 25-year-old ones were). 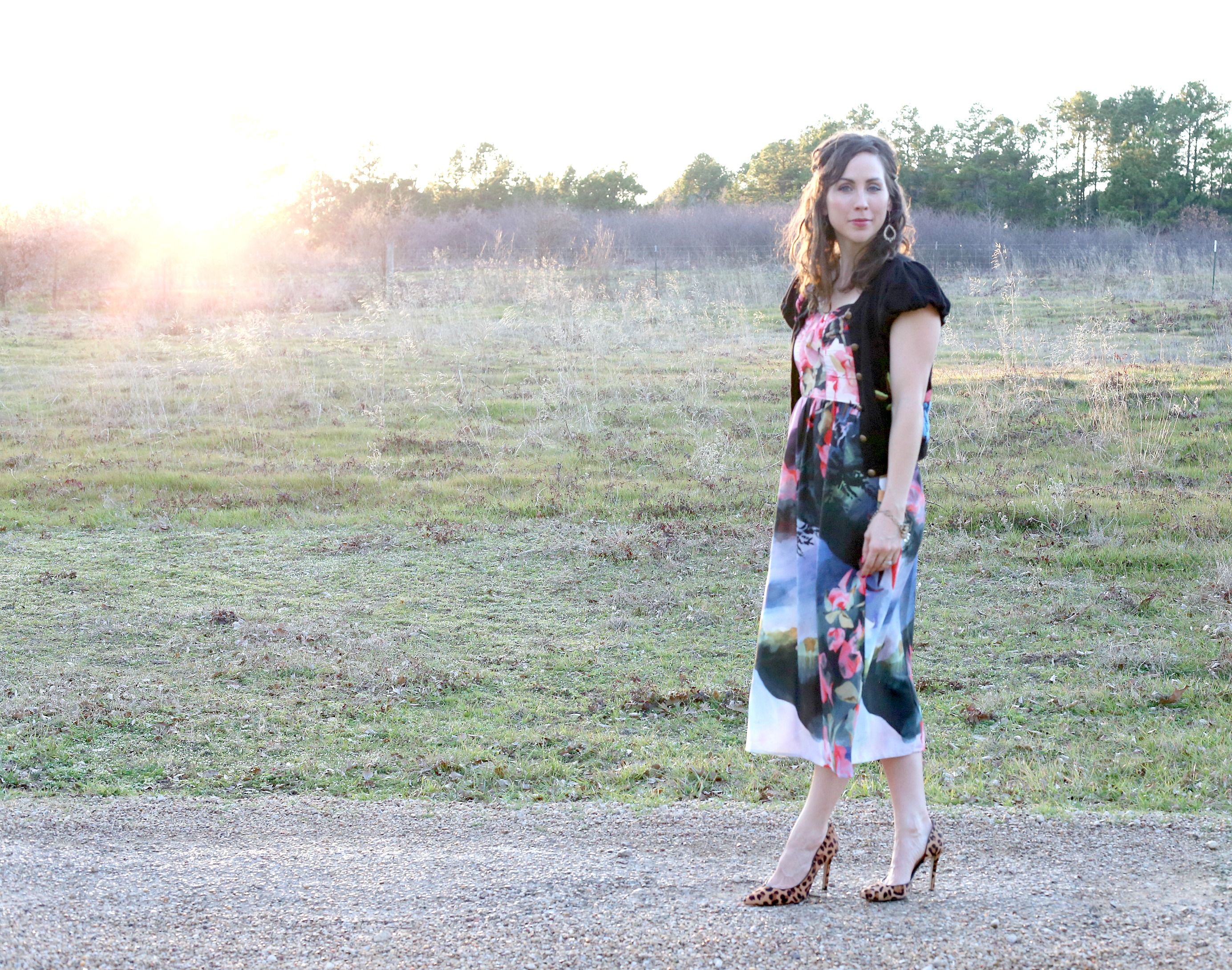 {P.S. We didn’t manage to get a straight-on shot of the dress before the camera battery died, but there is one on my Instagram…which, honestly, is the best place to see lots of pics of the house and the kids and other fun tidbits that don’t make it onto the blog}

Which…brings me to the title of this post. I’m going to let you in on a little secret. But you may not thank me for it if you’re a fellow Anthro-lover (of the clothes, not the prices, of course). I apologize (anthropologize…ha. ha.) ahead of time if you get sucked in.

A friend added me to this Anthropologie resale site on Facebook (thanks, Angie!), and I’ve been having way too much fun browsing the wares since. (It’s my favorite frivolous, my-brain-has-shut-down-and-refuses-to-do-anything-useful activity while Shaun and I watch a Fixer Upper rerun right before bed).

Some of the prices are decent. Some are laughably exorbitant (You want me to pay $200 for a sweater that I saw on clearance for $40 a few months back? Really? No thanks). Every now and then, you find something amazing for a great price (I just bought a mint condition white lace dress that I’ve been hunting down for a while that was originally over $200 for $25 shipped), but most of it is more than I’m willing to pay. Somehow, it’s still entertaining to browse and watch how frenzied the true Anthro-addicts get over finding their “unicorns” (their term for an elusive, sold-out item that they’re hoping somebody snagged in their size before it went bye-bye and is willing to sell to them, regardless of the price).

Other than the white lace dress, I’ve bought two things (one was perfect; one was a little small and will have to be resold) for a grand total of $55 shipped, but I’m fine with the price in this case because I’ve also sold multiple items (for maaaaajor profits because they were all bought for super-cheap at Goodwill or thredUP–that link gets you $10 off your first thredUP purchase and gives me $10 credit too), and I somehow have a loophole in my brain about spending a little more than I normally would on something I really love if I’ve already paid for it by clearing more items out of my closet.

I have to admit: I’m loving this FB sale site business. In the case of sites like the Anthro one, everyone is so motivated to stay on the site in good standing that there’s very little chance of shipping/mailing fraud. And, in the case of the local swaps, I like that I can check out the Facebook pages of the sellers if I have any concerns (I actually have never bought anything from anyone that worried me, but I like that I have the OPTION to stalk them first :)).

And there you have it, folks. A very colorful outfit. A date night recap. And a tip you may or may not thank me for later.

Never let it be said that I don’t do eclectic. Because I most definitely do.

Are you guys Facebook swappers too? I feel like–at least around here–it’s taking over garage sales and Craigslist as the preferred method of selling something that’s worth the effort.

How are your #3week50bags challenges going? Did you think I forgot? I’m actually going to be posting an update on mine on Friday. I’m a little off the pace, but I’m hoping to catch up today and tomorrow. I’ll let you know how it goes.