The past week has been a blur. I looked up this morning expecting it to be Monday, maaaaybe Tuesday, only to realize that–shoot!–it’s Wednesday, I haven’t blogged in over a week, and our vacation is almost over. (Pssst…even when I’m not blogging, you can still find daily updates on Instagram).

Okay, so I’m not quite that clueless, but the last 7 days or so  have melted together in a rush of travel and wedding activity.

The past few days have been a welcome respite from the busyness (we decided to stay a few days longer in Colorado after the wedding at an Airbnb rental in Broomfield), but I haven’t done (or felt like doing) much other than my best slug impression (although, I did get a free pass to a local gym yesterday and did BODYCOMBAT + GRIT STRENGTH for the first time in a week, and now eeevvverything hurts).

ANYhoo, how about that wedding that I went on and on about for weeks on end?

And a lot of fun.

I’d only been to Vail once before (that I can remember), and while I had a vague impression of charm, my memory was a pale facsimile of reality.

I’m pretty sure at one point I said: “This is better than Disneyland!” 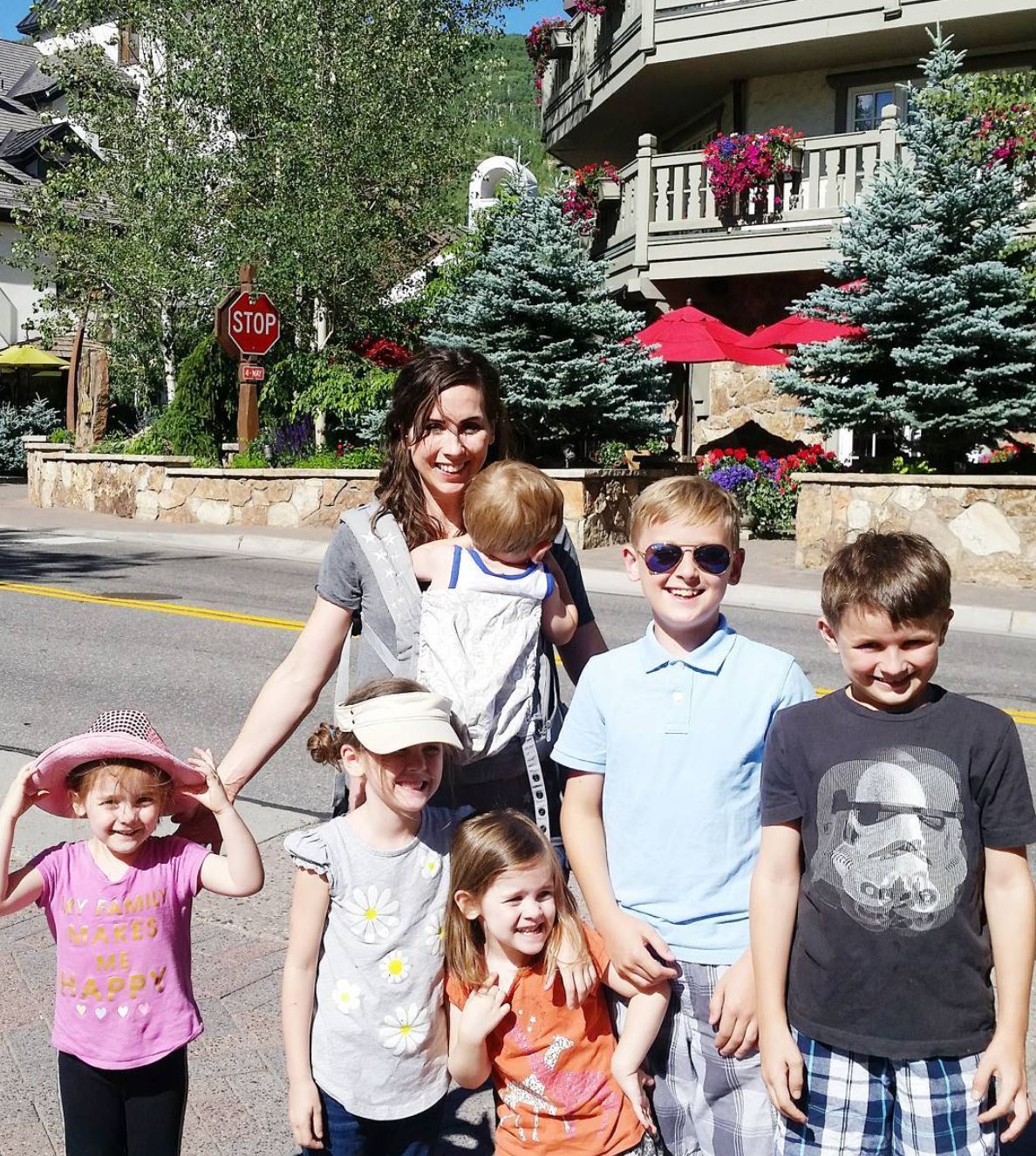 Vail Village–while far from “real” (no convenience stores, grocery stores, gas stations, or otherwise necessary shops)–is such a picturesque escape from reality that it’s hard to care. Window boxes fair-to-bursting with vibrant blooms everywhere you turn, funky sculptures, adorable boutiques, a burbling river that runs through the center…and all of it set against the backdrop of the mountains and the crisp blue Colorado sky. 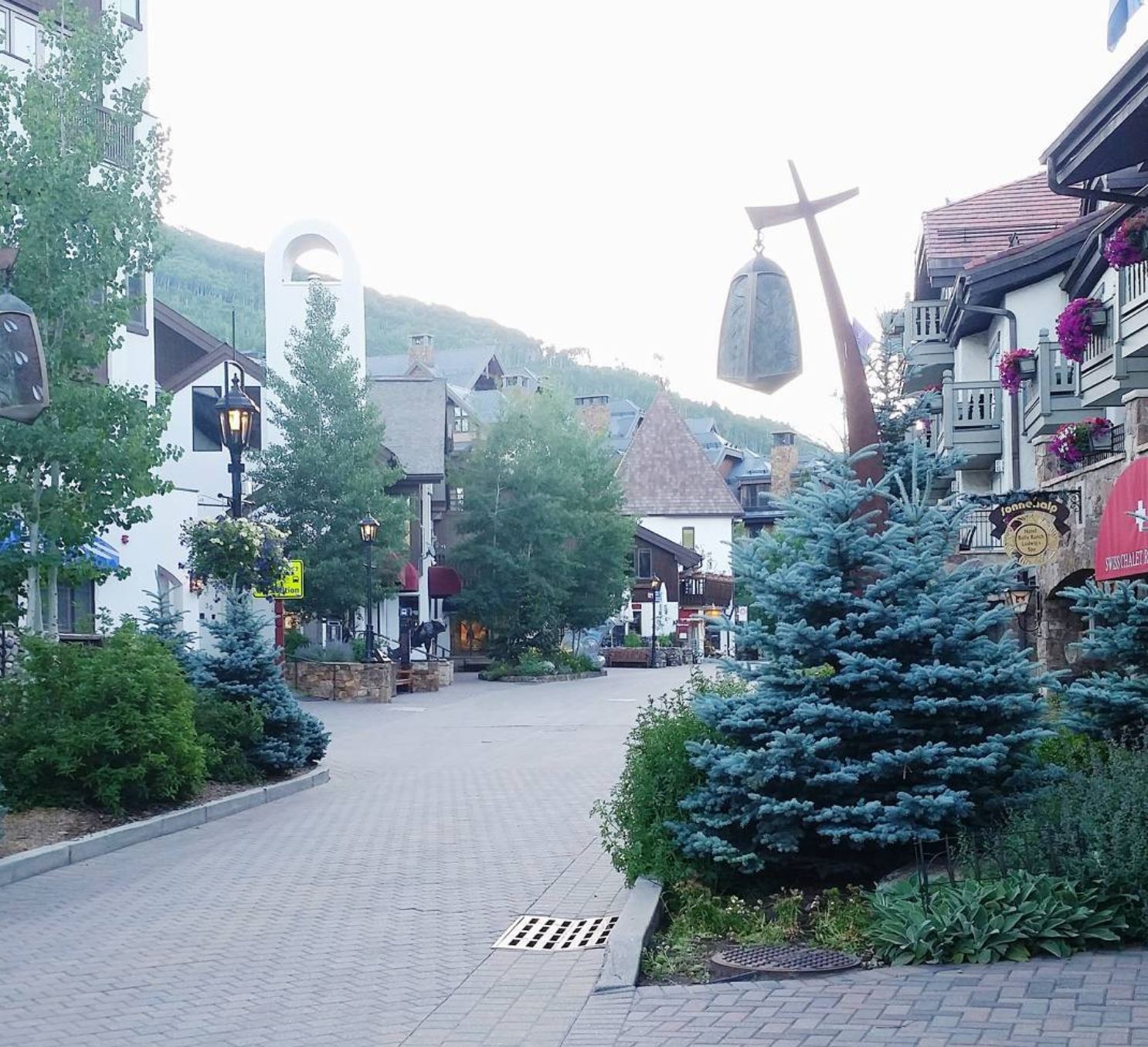 {Theo woke up at 5 one morning, went back to sleep, but I couldn’t, so I went for a “run.” Code for mostly walk. Because I’m an elevation wimp}

We pulled in around 3 PM after driving all night last Tuesday and the first half of Wednesday. Other than Evy waking up and squawking every 15 minutes for the first 4 hours, the drive went as smoothly as it possibly could have. In what I can only describe as God’s care for the details of our lives, Theo, who had been churning out pretty horrendous teething diapers every half hour for a week, didn’t poop once on the entire 18 hour car ride. Grateful doesn’t even begin to describe how I felt…even when he made 4 (!!) huge diapers within an hour of our pulling into Vail.

We were staying in the same condo as my parents, which was great, since my kids adore their Safta and Sabba, and my mom is pretty much the grandmother of everyone’s dreams (always willing to babysit, help, change diapers, do laundry, and just generally be a blessing).

We took the (free) public bus to the local Safeway (the kids thought riding the bus was the raddest thing ev-ah) and then proceeded to buy way too many groceries without realizing that we would have to haul them across a highway to the rather strangely situated return bus stop. Whoops. Let’s just say that, after contemplating hauling 6 kids plus 8 bags of groceries and a watermelon across the highway, we dismissed that thought and called Shaun to come rescue us. 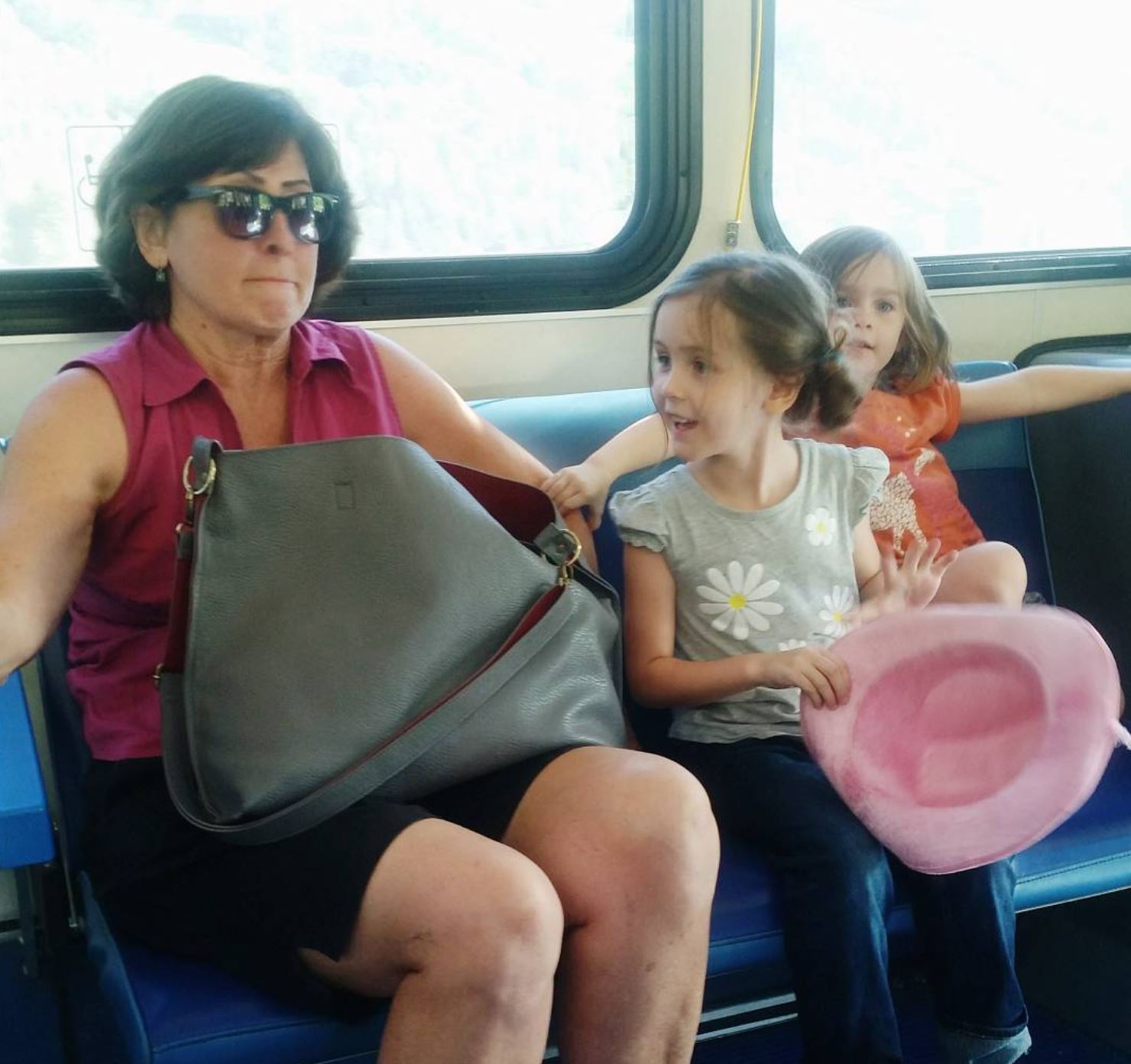 {Della: “Softa, this bus is sooooo fun. It’s like the funnest ever.” Not sure where she picked up her Valley Girl vernacular, but it’s pretty cute}

Thursday morning, Shaun and I took the kids on a jaunt through the village and up the pathway to the river + the park. Simon fell in the river, but, really, with six kids, that was bound to happen to at least one. 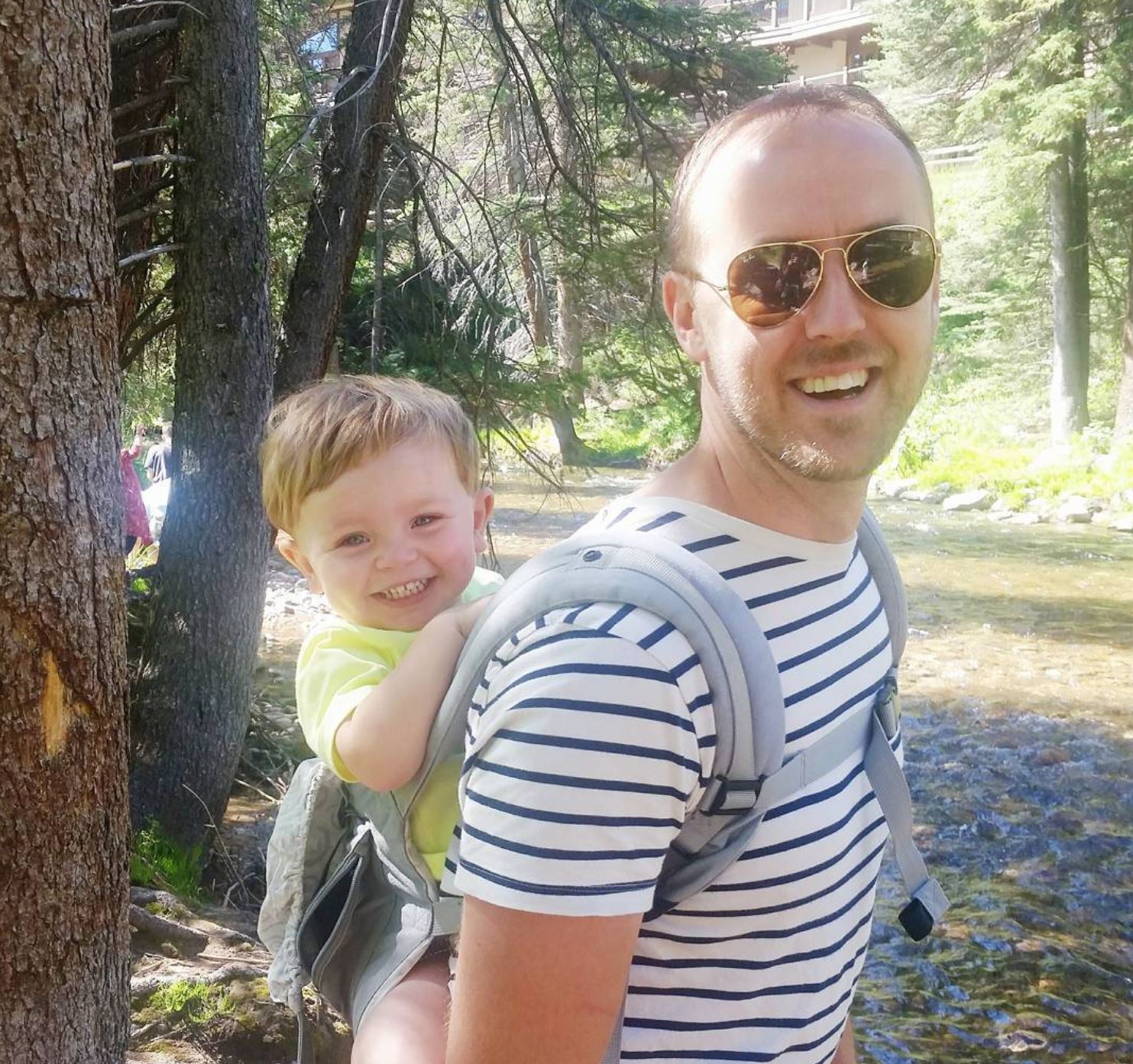 {Simon is likely dunking himself in the background. Theo and Daddy aren’t too worried about it; also, RIP, Theo’s curls} 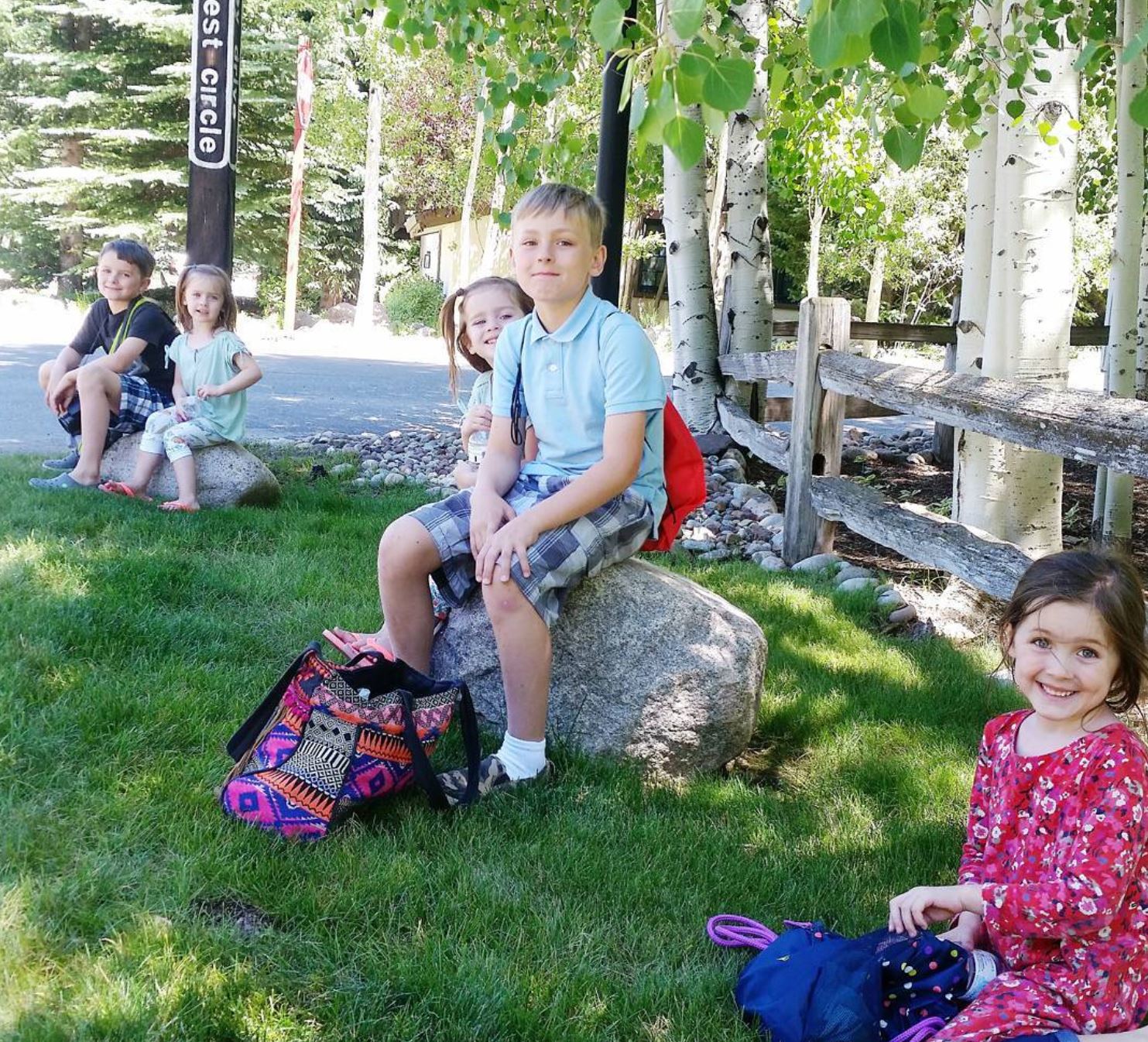 Here we are at a bus stop that we would likely have waited at for a very long time had someone not come along and informed us that that particular bus was only running every 2 hours. 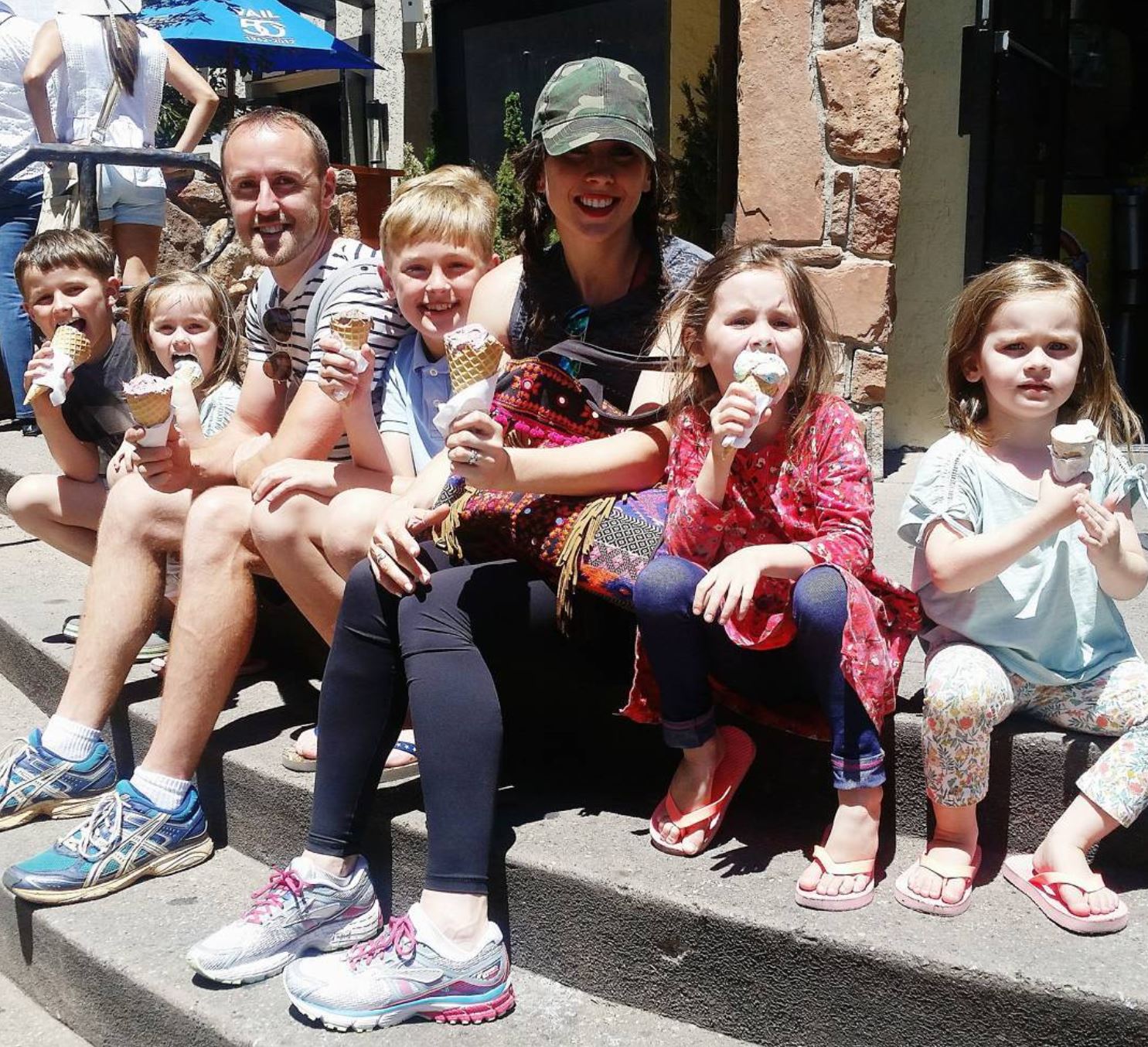 And what would a family “hike” be if it didn’t end in celebratory ice cream?

Thursday evening was the first of a series of wedding festivities–a pizza/pool party at the Lion’s Square Lodge. The kids took turns shivering in the pool, but I was glad that none of the adults seemed the least bit interested (and also that I have a 10 and 8-year-old who are happy to save their mama some swimsuit angst and herd the little kids in their floaties in the shallow end–don’t worry; there was always an adult on the edge of the pool too).

We got to meet the lovely bride (who was marrying my first cousin, Erik), and the girls (the twins especially) shined up to her immediately, offering shy hugs that quickly morphed into Koala bear clinginess at every opportunity.  (Sorry no photographic evidence was captured of this adorableness).

Friday was the rehearsal and rehearsal dinner, so the girls and I headed to the rehearsal at noon while the boys (minus Theo) rode the gondola for some fun on the mountain. Not gonna lie. I was sad to miss the mountain adventures, but it was still pretty cute to see the girls taking their flower girl roles so seriously…prancing gravely down the “aisle” (it was an outdoor venue, so they mostly tried—and failed–to walk a straight line in the pavement and pretend that there were people on each side). 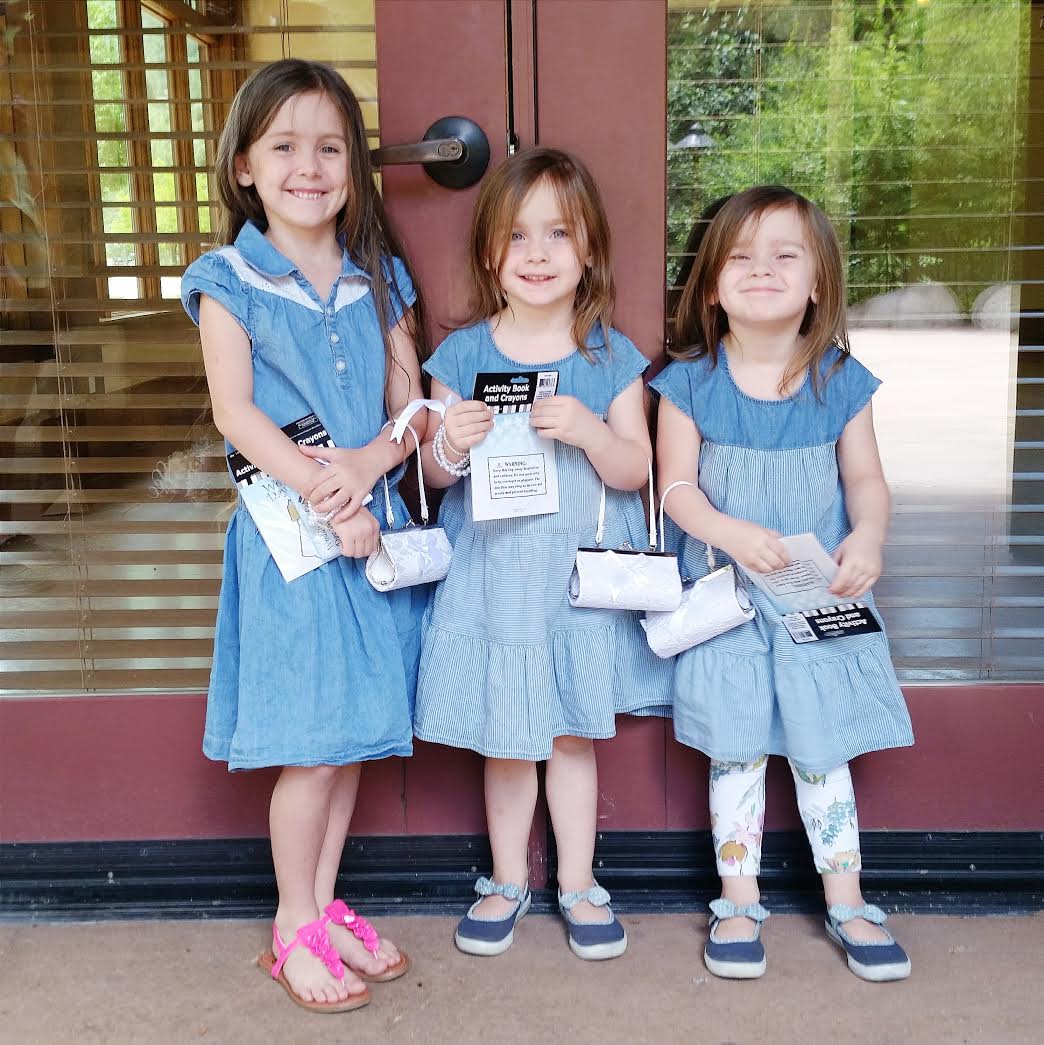 {The bride gave them matching satin clutch purses and “pearl” bracelets, and they were just a wee bit thrilled} 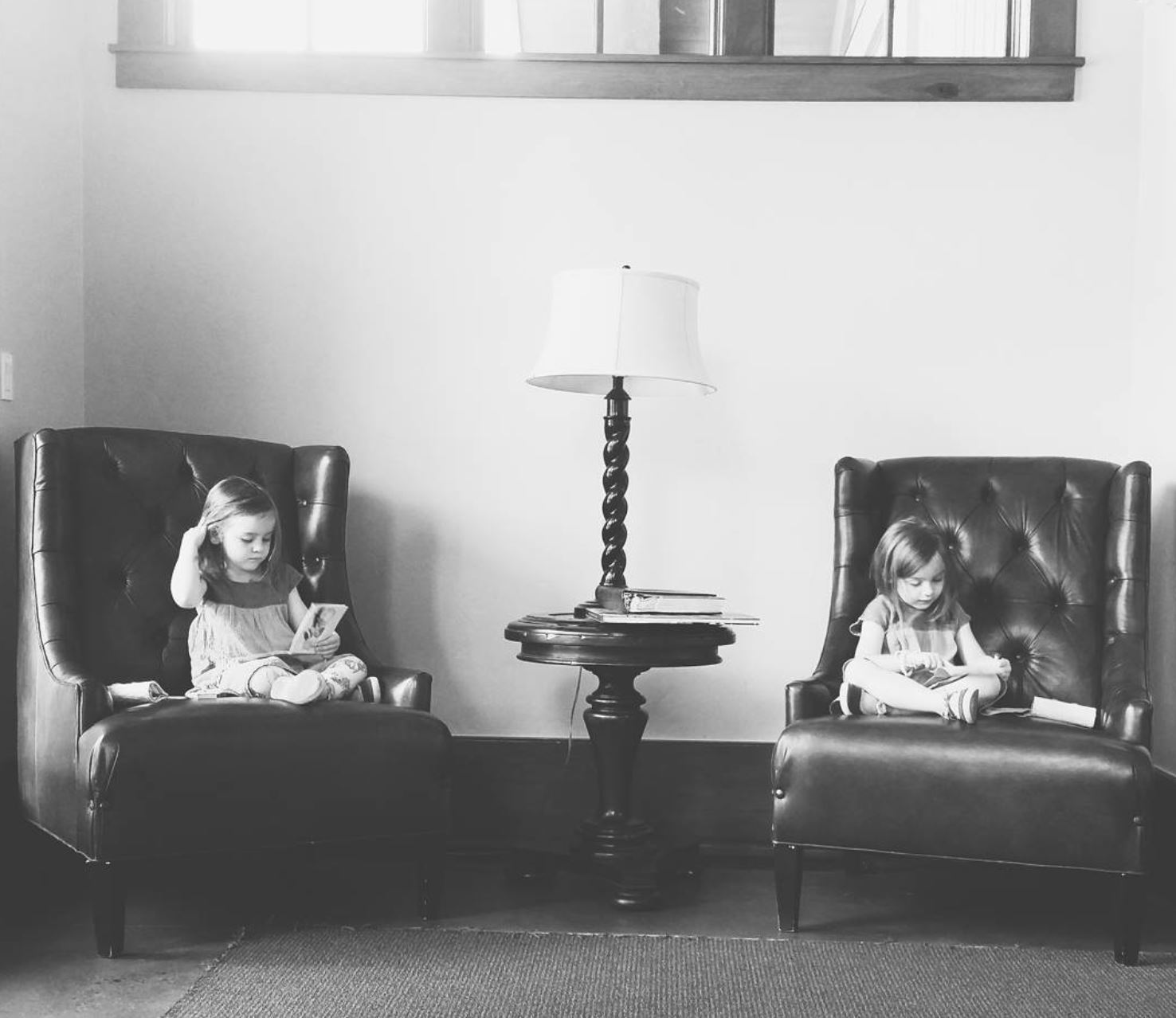 {My Aunt Patti–mother of the groom–was so sweet to the girls, even giving them wedding-themed coloring books/crayons, which kept them enthralled as we waited for the rest of the wedding party to practice} 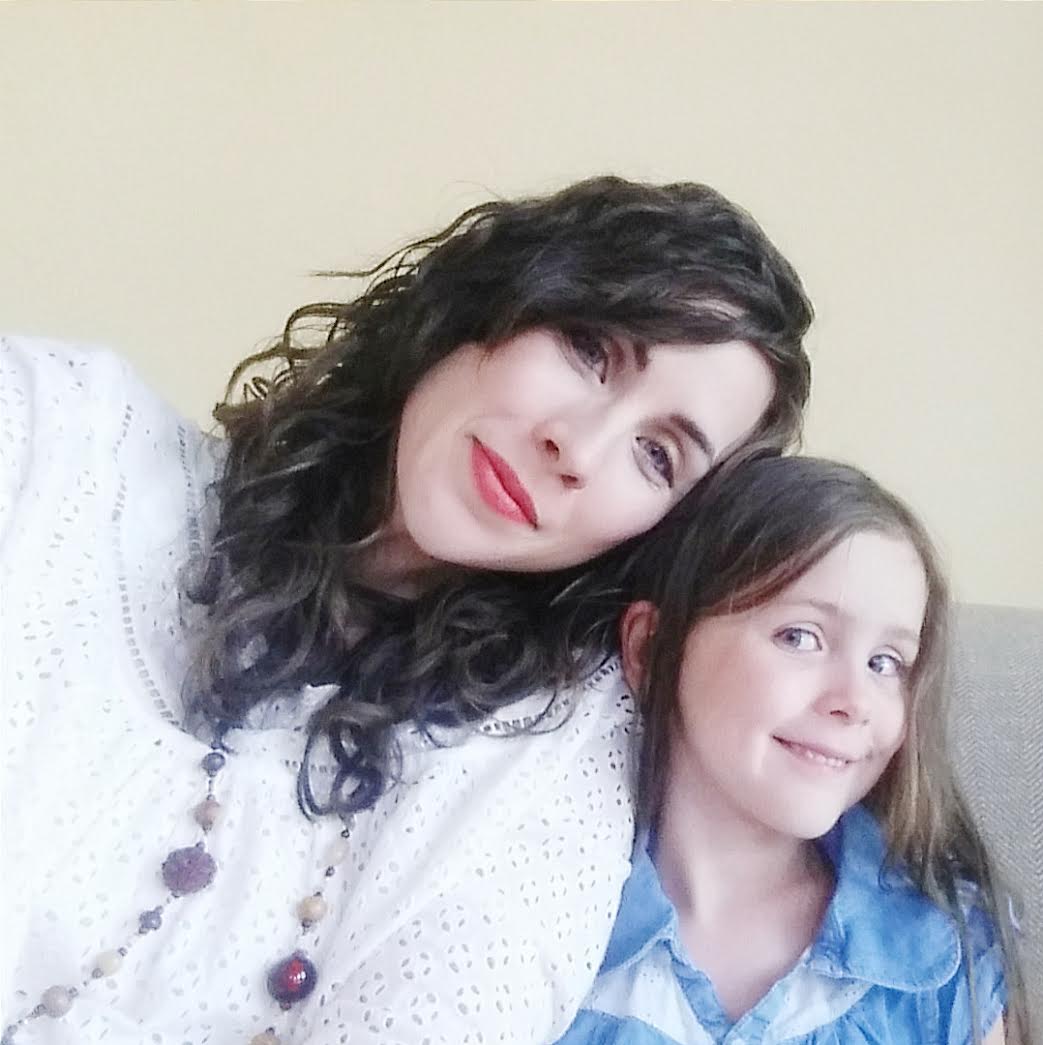 The rehearsal dinner was at a charming Austrian restaurant inside a resort called Sonnenalp (conveniently located a stone’s throw away from our condo), and, while multiple trips to the huge bathroom several levels down were the little kids’ favorite activity, the food was delicious, and I was just happy to make it through a 3 hour shindig with a minimum of spilled drinks and tears. (Between my brother’s two little girls–ages 2 and 9 months–and my brood, there were 8 kids, 10 and under, at 1 table; it could have been disastrous, but the kids did great). 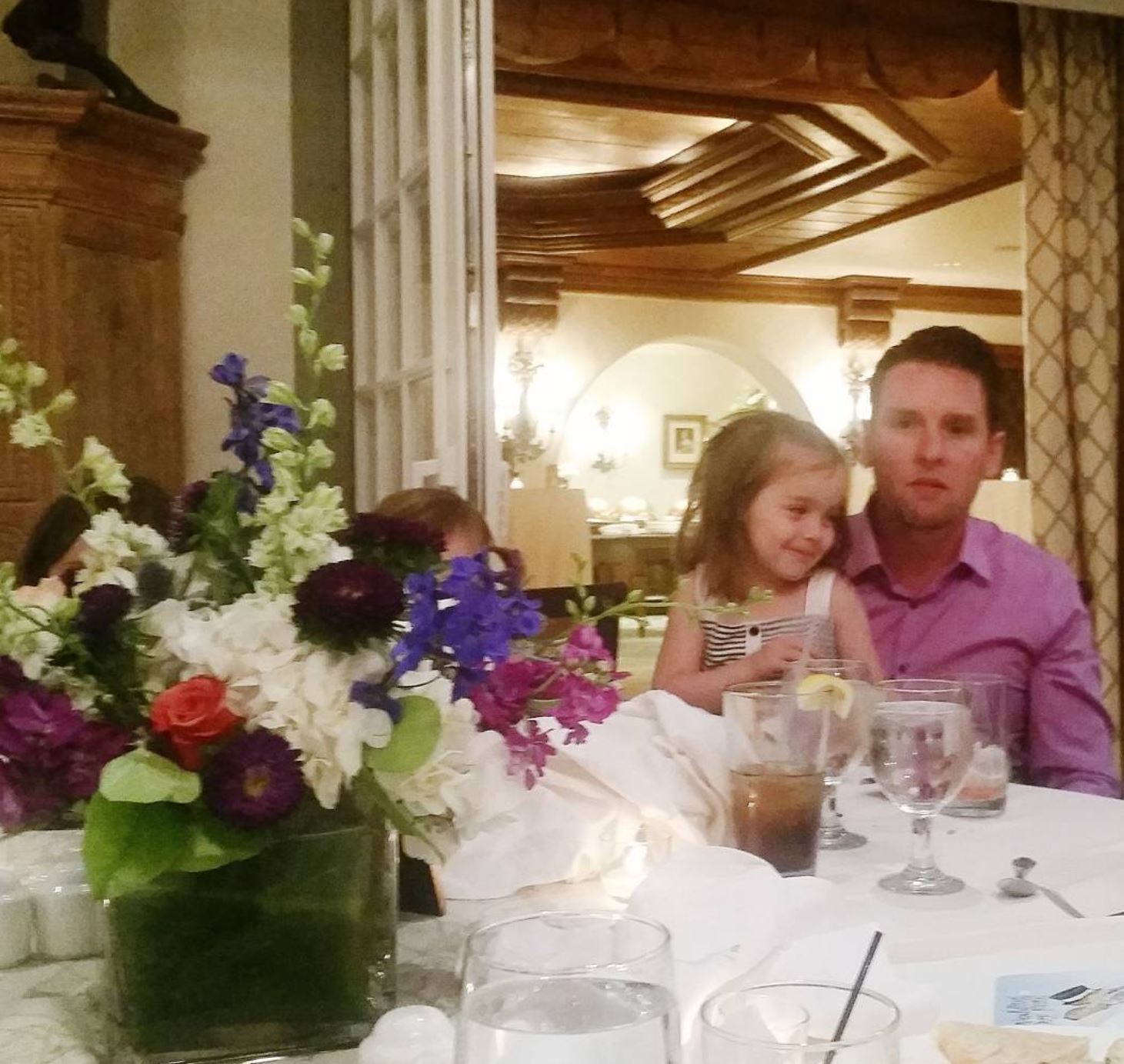 {Kidding, he’s a fabulous uncle; just managed to catch him at a rather blank moment}

I’d been worry-warting about the girls’ hair for a while, since the twins’ is stick-straight and fine, and Della’s is long but still needs a little help to look smooth. I wanted curls but had struck out with trial runs of foam curlers and curling irons. Lots of nice people on social media suggested curlers through the night, but we were home way too late from the rehearsal dinner to stay up and roll. Plus, the twins were doing well to keep the curlers in for an hour, much less sleep on them.

ANYhoo, Saturday arrived–WEDDING day!–and the girls were suuuuper excited. Most of the day was spent in some form of preparation or another. But my mom was nice enough to keep kids while Shaun and I slipped away for a quick bite. 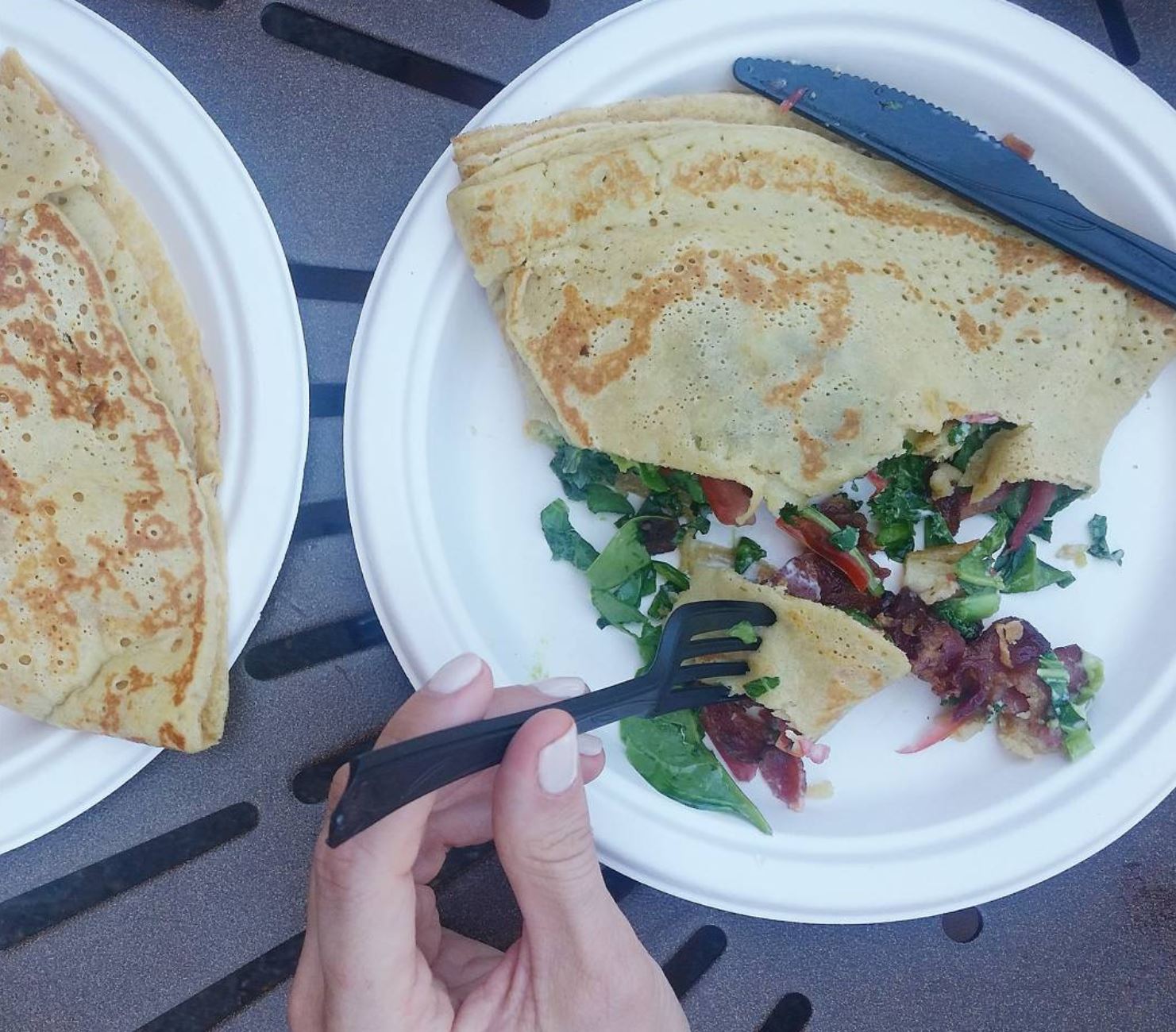 When the girls got up from naps, we went into full-on beauty mode. Pretty much everybody who wasn’t dressing him/herself got in on the action, whether it was toenail painting (Shaun: “So…how do you keep the paint from getting on everything around the nail?”) or hair-drying (Simon can wield a mean blow-dryer, y’all).  I dampened the girls’ hair, applied mousse, then rolled them in foam rollers and blasted them with the hair-dryer. I knew it would be touch-and-go, but it was the best option we had, so we went with it. 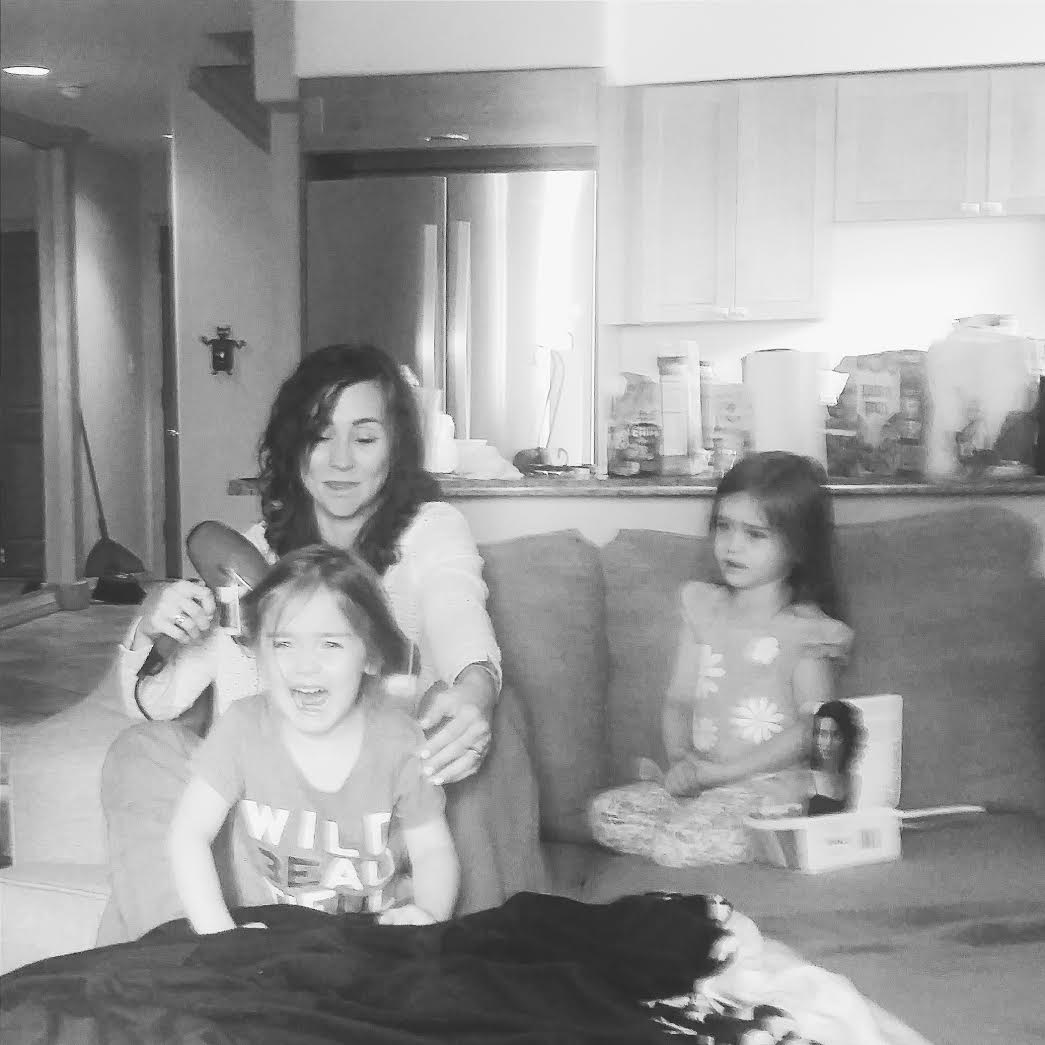 Clearly, they loved the process. Clearly, I was very sympathetic.

A couple of hours later, it was time to go–not so much because were were all as ready as I would have liked but because we had run out of time.

Wedding time was upon us…

And now, lunchtime is upon me. Plus, this is really long.